Steve and I were meeting the rest of the group and the tour leaders at 5:00pm at the National Trust office on the pier in Orford. We left Leiston Abbey with what seemed like plenty of time, but only arrived a few minutes early. One of the other group members was waiting when we got there, I think most people were impacted a bit by traffic, one guy was really late, traffic ruined his day.

There were eight of us on the tour, two photo guides and six punters, all middle aged blokes :). This photo is by Steve. 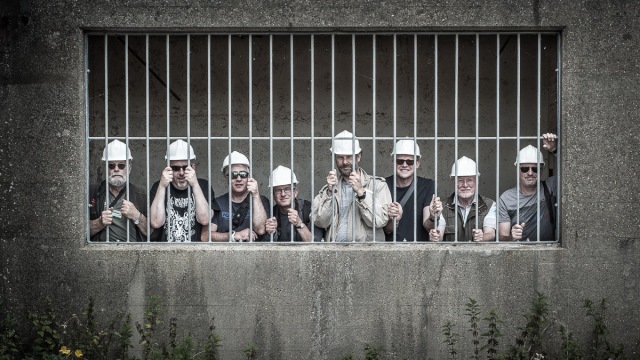 National Trust run one overnight tour to Orford Ness a year, though a number of photography and other groups can book private trips. This is the only way to see the area after hours and the only way to get access to some of the closed off sections. To enter the buildings that were open to us we all had to wear hard hats. Once inside you can see why, a number of the buildings had material dangling loosely from their open and exposed roofs. As these buildings get more and more run down and dangerous they will slowly close and one day there will be no access at all.

For more about Orford Ness, check out my last visit here.

This was to be a 24 hour stay, it was a photography based tour, and the aim was to make as much of the available light, and dark, as possible. We were out and about from soon after we arrived and had been briefed what we will be doing until a late dinner about 9:30pm, back out again till midnight and up again at 4:30 for sunrise. I took more photos in those 24 hours then in any previous 24 hour period. I am not a prolific photographer – my habit is to take one, maybe two images of something and then move on. I took about 350 photos, an extraordinary amount for me. There was a lot to see and do! I am going to split the tour into two or three posts, I will see how I go. This first post will be a general overview of the 24 hours.

After finding bunks and unpacking our kit we jumped into a National Trust Land Rover and an electric buggy and headed off on a tour of the site. Other than the guides I was the only person who had been here before. The first place we visited was through the no-entry for the public gate and up to the far end of the Advanced Weapons Research Areas (AWRE) to labs 4 and 5, the ‘pagodas’ and the places I wanted to see the most – I was very excited to know we were going to be able to see inside these places.

The pagodas were built in the 1950s to test components used in nuclear weapons, mainly the triggers and detonators. There was never any acknowledgement that any fissionable material was ever on the Ness, but of course, what secrets the M.O.D. have will not be revealed for a long time yet. The roof was designed to collapse and seal the room below in the event of an explosion, I think they look very mysterious. Brutalism in the architectural and the real sense.

There is very little left to see inside any of the structures, when the M.O.D. left in the 1970s the site was savaged by metal collectors and scavengers and most things of value was stripped out. There are still a few bits and pieces and this made it quite interesting from a photographic point of view. I took a lot of pictures of the fittings that remained and these will make up my next post.

We spent a few minutes looking around one of the pagodas before heading off to the far end of the site to the north of the light house to have a look around one of the more desolate areas, and to check out a good location for tomorrow’s sunrise. I was just taken with the flatness of the land and the big, big expansive sky above it – a sky filled with lovely clouds. 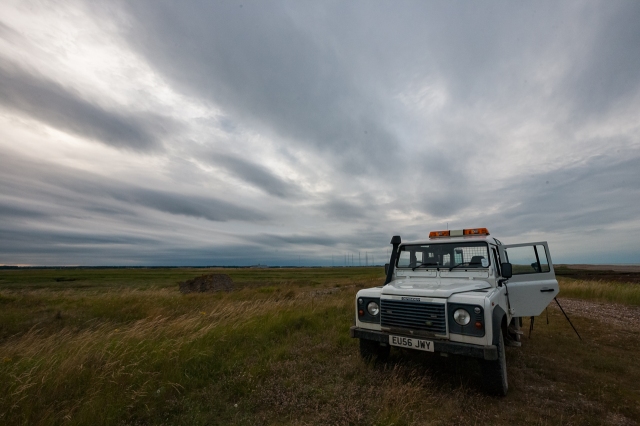 As it drew closer to the end of the day we headed back to the hut and took some photos back towards Orford and its castle. The sunset was not particularly brilliant to start with, though there was some late flare that lit the sky as we were eating our evening meal.

I am not often out in the ‘golden hour’, that period of time around sunset and sunrise, when the light is mellow and filtered. It is the landscape photographers best light, and I never use it. Don’t ask me why – perhaps now I am not working and have a car I could nip out to the forest in the evening? 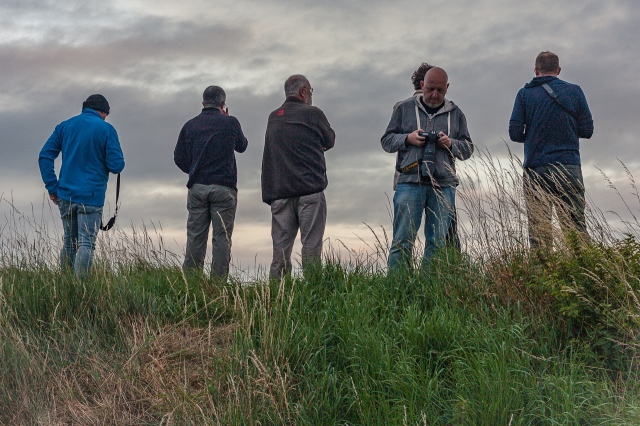 Once it had gotten dark we headed out again to take some long exposure night images, there was a bit too much cloud around to get much moonlight – or any star trails. This is a one minute exposure towards the lights of Harwich. I haven’t done any night photography for ages and really enjoyed it, though it was very windy so not the best of conditions, even with a fairly sturdy tripod.

It was past midnight when we headed back to the hut for some ‘sleep’ before a 4:30am start, coffee and then back out for the sunrise. Like the sunset the night before it was not a great glowing light fest, though it was good to be out in the early morning light.

This photo of me is by John, one of the tutors, I was probably taking the above photo.

After breakfast we went back up to the AWRE area for a more detailed explore of the buildings. We were split into two groups making it easier for us all to get time in each location and look for images. Being on a tour means we could ignore the signs and enter some of these spaces, some were deemed too unsafe to enter.

I love these buildings, I love their shape, and the harsh design and build and I love their location on this flat, desolate and ancient area.

I spent a lot of time picking out the small details, the photos will make up the bulk of the next post. I was looking for industrial shapes, and of course a bit of decay! Like this extractor pipe. 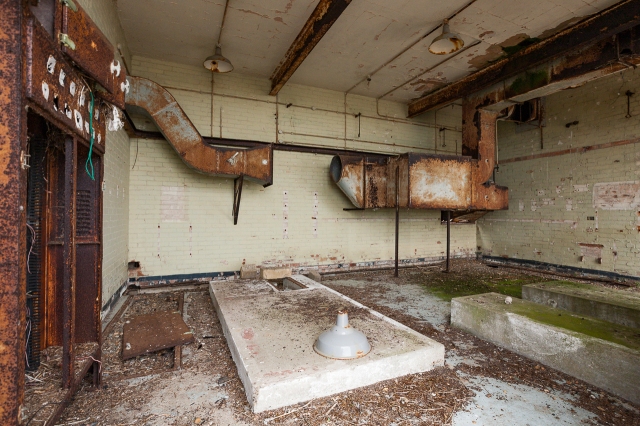 Most of the day was spent out and about, the light wasn’t brilliant, it was a bit bright for my taste, I would have preferred more dark cloud – but at least it was not uber bright and sunny.

Though we were looking for a patch of bright sun to get the shadows from the failing roof structures in the back of laboratory 1. Luck was briefly on our side! You can see why you need a hard hat to enter these places. We were not allowed into the main space as those ducts are hanging quite precariously. Interestingly; that ground looks like it is a flat floor, but on the far side is a 12 foot deep pathway about a yard wide. It is impossible to see, only old photos of the site reveal it. If you wandered over there you would disappear into the mire, possibly to never be seen again. 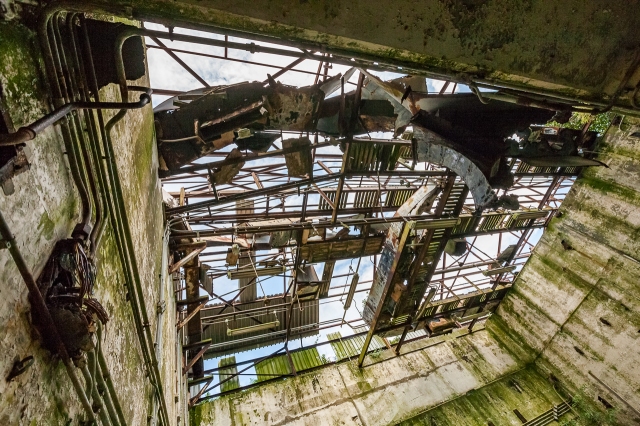 The interior of this building was excellent for photos, there was a surprisingly large amount of ‘stuff’ left inside. We spent a lot of time discussing what it was for. The shell of the centrifuge was quite obvious, but what it was for is unknown.

Another of the buildings we visited had a centrifuge we could see in to. It is all so interesting, yet so little is publicly known about what actually happened in these buildings. We know that many things were invented or tested on Orford Ness, that experiments with things like high speed cameras, radar, weapon systems and explosive triggers for nuclear bombs happened here. But what really went on ?  One day we will know.

All too soon it was mid-afternoon and time to pack up and head homeward. Steve and I left with the early group, some of the others continued on to see things like the lighthouse, which I had visited before. I was keen to get back to London as I have to be up at 5:00am tomorrow to go to Spain. I needed some sleep 🙂

It was a very enjoyable and educational trip, the guides/tutors were great and my fellow photographers were a good bunch to hang out with and I look forward to seeing some of the photos that other have made, and how they may have seen Orford Ness. 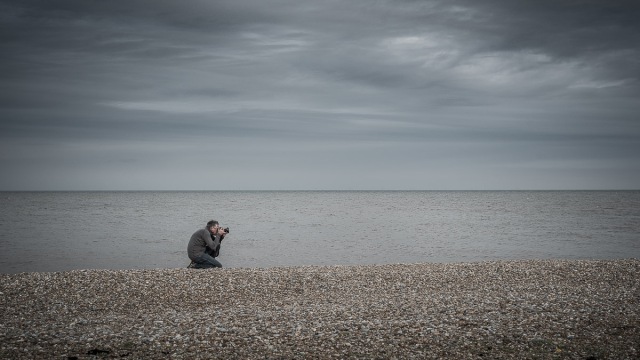