Woke at 3.30 am to the loud, proud and constant snoring of the third person in our four bed bunk room, surprisingly up until that point I had slept OK. We were up at 6.00 a quick, cold shower in the rather dodgy bathroom and then a walk down to the bus station to find a bus to the ferry terminal to get the 8.45 ferry to Pulau Lubuan, which is a Malaysian island. From there we get another ferry to Kota Kinabalu in Sabah, which is our final destination for the day.  It appears we missed the express bus, though it was a bit hard to tell as no timetables were in existence ! We decided to get one of the local buses for the princely sum of $1 for the 25km journey (Eat that Auckland Council !) The bus took 50 minutes to get to Maura , where we were directed to get on another bus that went to the ferry terminal, this bus was possibly the slowest in SE Asia and seemed to take every possible back street in Mauru. We were getting a bit tense as it was now 8.30 and we had no idea of the immigration and ticketing process at the ferry. If we missed this one then we may not make the final ferry from Pulau Labuan and be stuck there for the night, which doesn’t sound appealing !  Once we made it to the terminal it turned out our taxi driver was wrong and the ferry was at 9.15, whew !!

The ferry was a standard small car ferry, similar to the one that travels to Waiheke, unlike the sleek speed machines I caught in Sarawak.  Before we started  the staff put an Islamic prayer on the DVD, hopefully that was not a sign of the state of the vessel ! we had a quite and uneventful hour fifteen trip across to Pulau Labuan in Sabah, Malaysia.

J – my French travel buddy for a few days. 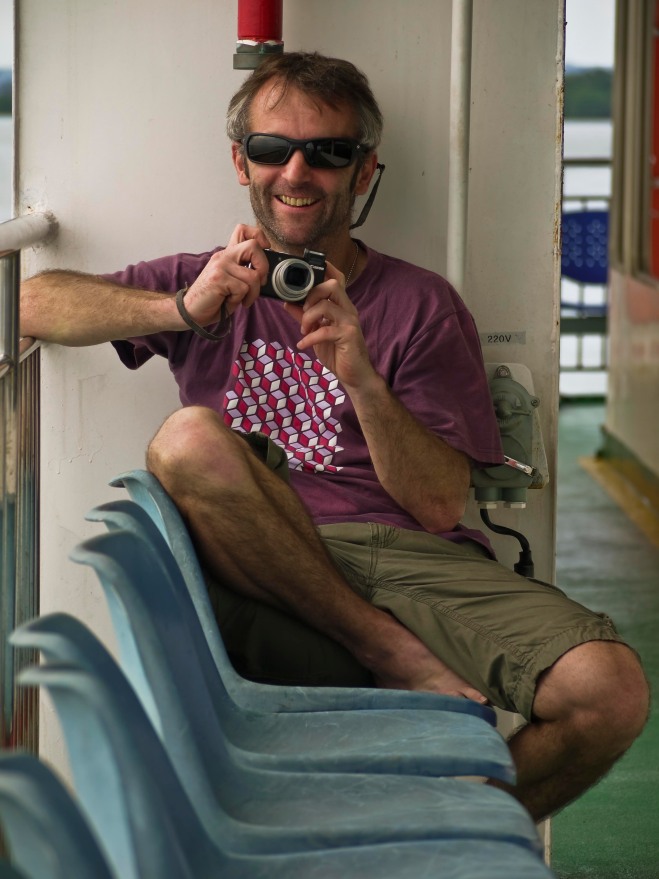 We had a two hour wait until the ferry to Kota Kinabalu (KK) so had lunch and a walk around the shopping area. The island of Pulau Labuan is entirely duty free so I could not help myself and bought a 500m bottle of Grants whisky for about $ 8NZD. There was a great range of single malts and ridiculously low prices, but seeing as I had little space and was not planning on carting booze around I went for the smallest bottle I could find.

The ferry to KK left at 1 oclock for the 3 hour trip and was one of the sleek racing machines where you had to stay in the cabin. The movie that was played was Titanic 2 !!!! Inspirational stuff…

Another uneventful (thank goodness) ferry ride, a boring run as the windows were too high to see out of without really straining the neck so I just put the head phones on and completed three days of blog entries till the battery expired in my laptop.

We arrived in KK at 4.15 and thanks to the Canadians I met at Mulu, had a map of the town and could find our chosen hostel, Lucy’s Homestay where we checked in to a dorm for two nights. First impressions? KK looks nice, cleanest place I have been to in Malaysia…

Mooched around the hostel for a couple of hours then went out looking for some food. We wandered the night market for an hour so, definitely the biggest market I have been to so far, lots of pairs of $10 Nike and Adidas running shoes –  this is the first experience of knock off on a reasonable scale.

We found a seafood hawker market down by the wharves and selected a fish for dinner, which was BBQ’d and served with rice and vege. Extremely fresh – very nice. 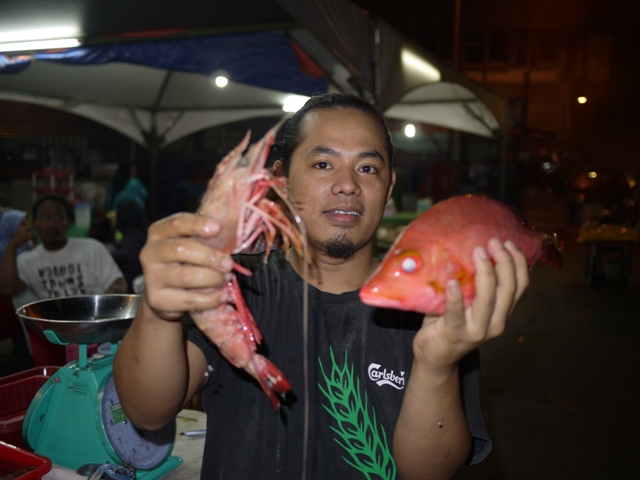 Had my first child beggar experience at dinner, that it was a very half hearted effort, a young girl walking past tables with her hand out. Sad.

J is also going to Brunei today so Mrs Lee from the hostel organised a private car to take us for 60rm each. The car takes us through the border and will drop us off at our accommodation. While this cost is quite high it is an easy way to get from the border to Bander Seri Begawan (BSB) the capital of Brunei, plus it gets around the uncertainty of bus timetables – or lack thereof.  I have found that all the inter-city buses are at bus terminals are away from the town centres. This means having to get a local bus to the terminal, though these are very cheap when you are new in town with no map and no plan, it can be difficult to work out how to get the bus to where you want to do. Just another thing to get used to I guess.

No great rush this morning as the car wasn’t arriving till 9.00 so did some more photo uploading and a blog post, after a few days away from the laptop there is a bit of work in updating the blog.

Mr Foo picked up on time and we left Miri, I enjoyed my stay at the hostel, met some good people, had some good experiences and learned a lot more about travelling, hostel life and eating. Mr Foo seems to be a courier as well as a people transporter as we made our way around a variety of back streets in Miri picking up parcels he would later deliver in BSB. He also spent about two of the three hour trip on the phone, seemingly making deals. It was a  slow journey, the roads are not the best and until we hit the outskirts of BSB (when we were doing 130km) we bounced along at a fairly solid 80. There is not a lot of interesting things to see on the journey either..

I am not sure what I was expecting of Brunei, as it is an oil rich, strictly Islamic nation (alcohol is banned in the country) , I had visions of splendour in the desert. It is nothing like that ! it is just like the rest of Borneo, jungle, palm oil plantations and a mix of poor and expensive housing. The capital BSB (pop, 300,000)  had some huge buildings and was mostly tidy, the CBD was small – even Auckland is bigger! The Sultan and his family have built some huge buildings though, palaces and mosques that cost significant millions.

Oil and petrol are Brunei’s main source of wealth and unlike NZ it’s primary product is sold very cheaply to the local population. In fact gas is cheaper than water , 1 litre of gas is 53 cents, 1 litre of water is $2  !!!!! There is a catch, you can only put cheap petrol in a Brunei registered car, which Mr Foo had. I am not sure of the price to non-locals.

As we arrived in BSB the heavens opened for a heavy downpour of rain, I didn’t see any lightening but the thunder was terrifically loud. As we arrived at our chosen hostel then rain magically stopped. Mr Foo dropped us off at the Youth Hostel, the cheapest place in town, according to “the book” the others are no better, just more expensive. We hung around reception for a while and a guy came out and told us it was full with a local football team staying for 3 months, we were just about to leave when two French guys who J had met earlier in his trip checked out. We managed to grab their bunks – score !  The hostel is the local YMCA and had  lot of box like dorms with two bunks in a room.  As the rooms were not made up (i don’t think they ever are) we dumped the packs and went exploring. 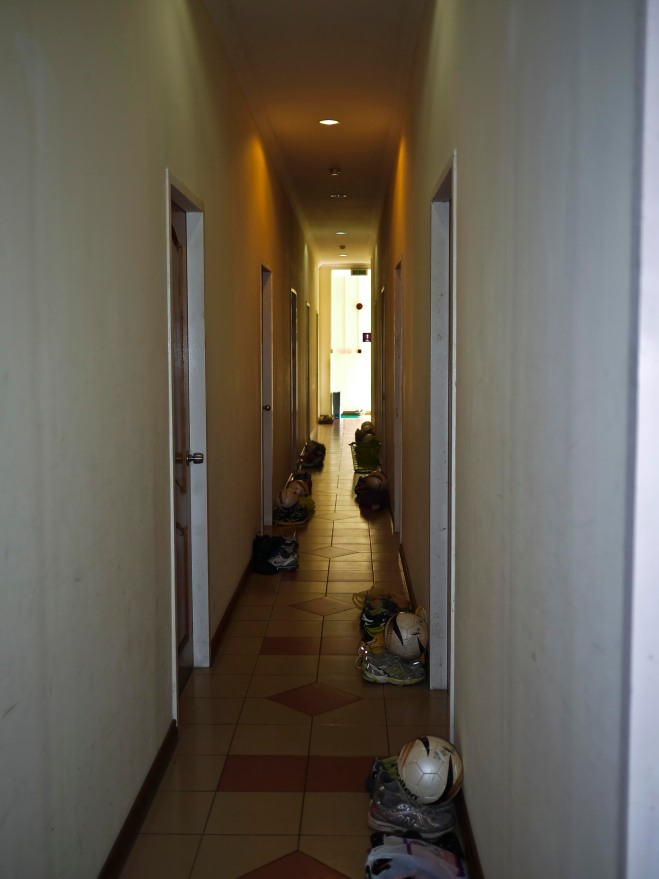 Not a lot of power points either!

Just down the road is the Tamu Kianggeh (Kianggeh market) where we had lunch of noodles and vegetables and a can of sugar cane juice for the sum of $2.

After lunch we got ourselves a water taxi for a tour of the water villages on the far side of the Brunei  river. Kampung Ayer is made up of a number of separate water villages. The villages have been there for a long time and life is quite well established with a number of schools, shops, a mosque and a large number of water bus stops. As the houses are subject to consistent tidal movement and the effects of water they eventually become uninhabitable so new villages are always being built. Our boatman owned a house in one of the new villages, it cost him $168,000.  The water village was quite fascinating and I enjoyed the trip. 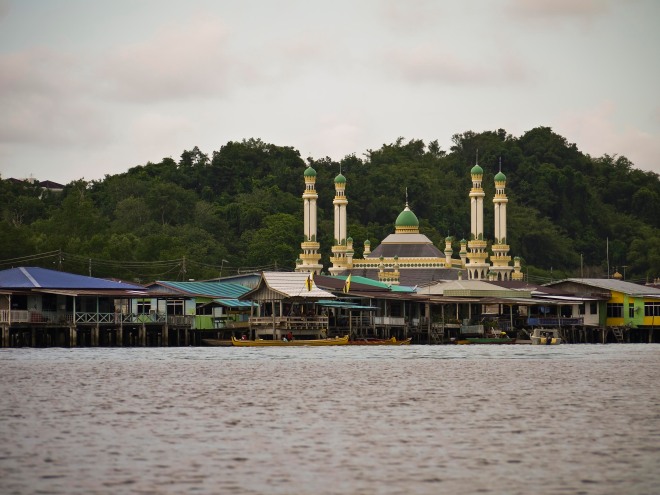 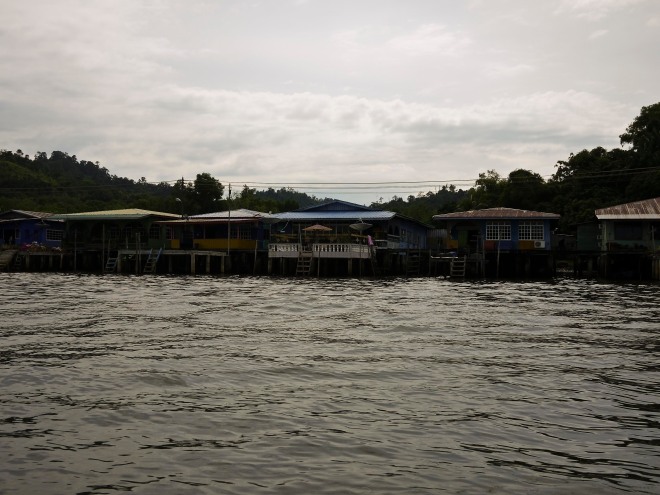 After a petrol stop our driver asked us if we wanted to go and see if we could find proboscis monkeys in the mangroves just out of town for an extra $10 each, we agreed, though with a small sense of doubt as to whether this was a tourist rip-off.  I should have put such doubts aside after 20 minutes of motoring up the Brunei river, J spotted a small crocodile in the mangroves.

And a bit further up we found some monkeys . Awesome, wild proboscis monkeys, I snapped some shots but did not get anything good, they move fast ! I am loving seeing all these real wild animals.

I had been really struggling with camera today, and found out after we had seen the monkeys that I had somehow set it to 4 times digital zoom, once I removed that setting things were back to normal. The GF1 is a small camera and I find I hit the buttons with my hands quite a lot when using the viewfinder in manual mode. Frustrating sometimes.

After the monkey trip we boated back to town and profusely thanked our boatman for a great couple of hours on the river, an unexpected highlight of the trip. We went back to the hostel and changed into long pants to go and check out the two big mosques in BSB. Sadly the guide book was wrong and we missed the visitor time by a few minutes! We had a good walk around the Omar Ali Saifuddien Mosque mosque.

Then caught a local bus to the Jame`Asr Hassanil Bolkiah Mosquemosque which is a couple of kms away. This was my first local bus experience, and possibly J’s to as well, I haven’t asked. The bus dropped us off outside the mosque as the sun was setting. 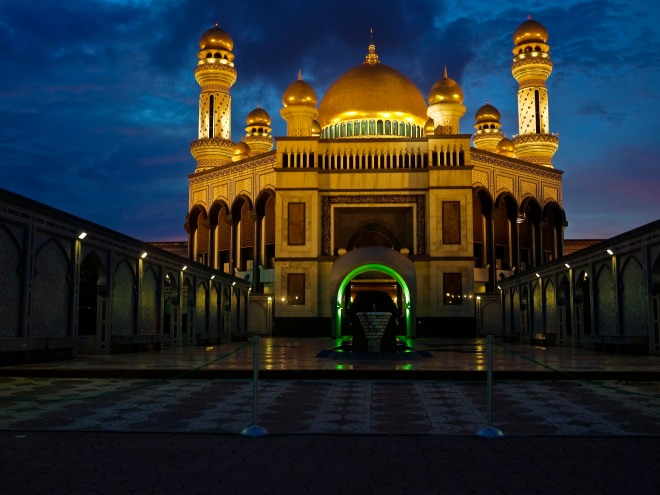 As we were wrapping up our walk and were wondering how we were going to back to town a taxi pulled up to drop off a fair so we jumped in and got a ride to the night market to look for some food. Our taxi driver was a wealth of information about buses and ferries for tomorrow which was gratefully received (and as it turned out completely wrong !). the night market was Ok, but there was no food that really caught the eye so we walked back over to the Omar Ali Saifuddien Mosque mosque to get some photos of it all lit up.

We found a hawker stall down by the river that sold very nice chicken satay and sticky rice for the princely sum of $4 including a cup of lemon tea, awesome…. after dinner we walked back to the hostel, finally checked in, grabbed some sheets and went to bed, A good day, I really liked BSB.

One thing I can say about the people of BSB, they are the friendliest people, lots of people waved from boats and cars, most people on the street said hello as we passed, and no, no-one appeared to be trying to sell us anything !