I have never been to Windsor Castle; at least not as an adult. It is entirely possible that I visited as a child, but the only memories I have of it are more recent, and mainly come from the TV and movies. As a nearby and important castle, it has been on my ‘must visit’ list for a very long time.

Things have been really manic at work for quite a while now; the implementation of a new system was always going to be intense and stressful and it certainly was all of that and more. With all the time spent working I have not spent any time even thinking about trips away or adventures – big, small or even micro. So when El said she was taking the two days before Easter off of work and suggested we take a day out to go somewhere, I jumped at the opportunity. Actually, what I did do was ponder it for a few days, ask my boss for the Thursday before Easter off and crossed my fingers he would say yes. Which he did.

A day was not going to give us time to do much so we decided to nip down to Windsor the night before and get into the castle before the day got too busy – and then I could finally knock Windsor off of the list.

I will say the week had been pretty average, and average was the best it got before I snuck out the door early on Wednesday to power walk my way to Waterloo Station to meet El and the 4:58 train to Windsor and Eton Riverside. With a few crappy work emails on the hour long train ride I arrived in Windsor with a bit of a grump on. Luckily El had booked us a nice hotel who gave us a free glass of prosecco each on arrival. This certainly helped to smooth over a few of the bumps in my day.

After settling in we went for a walk out in to the early evening for a quick explore of Windsor. It is a lot smaller than I expected and is totally dominated by the castle.

Windsor the town as it is now known was originally known as New Windsor, with the first town of Windsor renamed Old Windsor when the new town was built around the castle in Norman times. Windsor means ‘winch by the riverside’ in old Anglo-Saxon. The town had its boom time in the early 16th century but faded after the reformation and the death of King Henry VIII soon after. Outside of the castle there was really only one building of interest.

The well wasn’t particularly interesting – though the machine gun toting copper in the background did highlight the seriousness of the castle, the Queen was not in residence at the time. 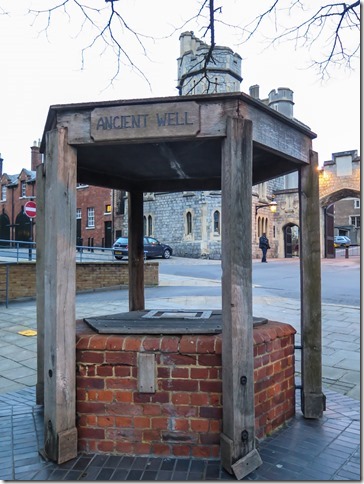 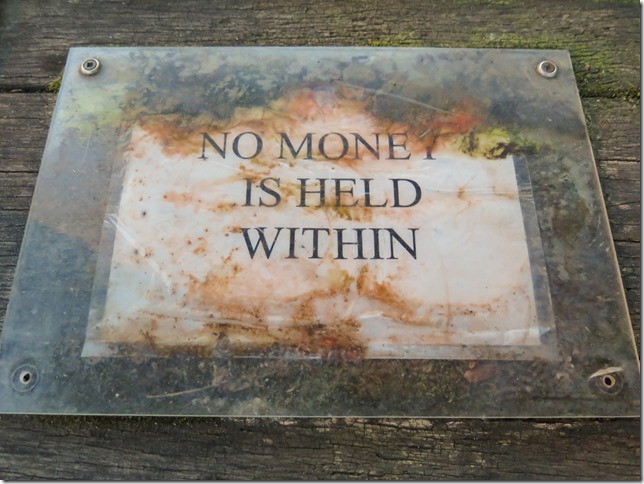 This is obviously the Long Walk – not the long cycle, or push. 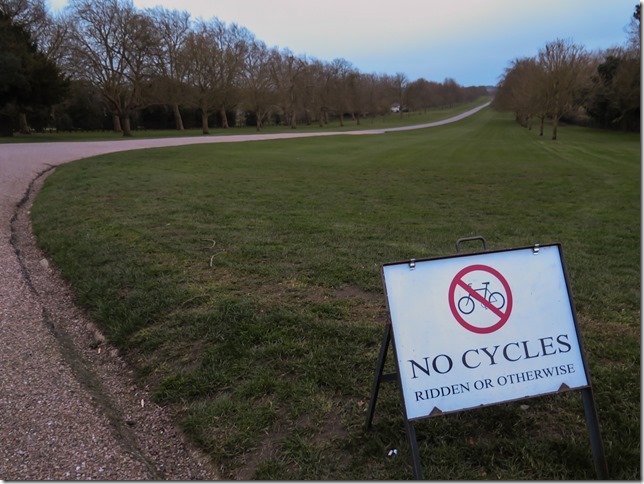 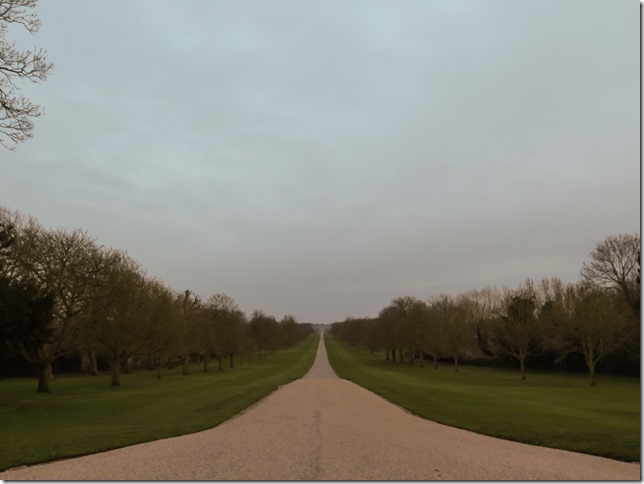 Viewed from the other end you do get a view of the castle. 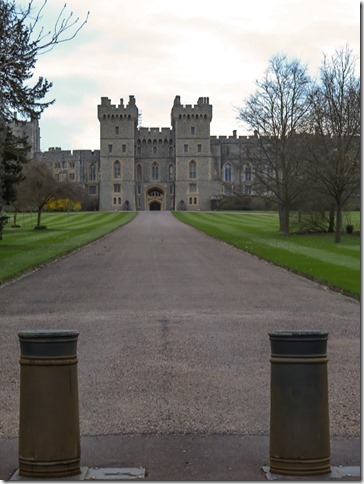 The rest of the town didn’t really inspire, though to be fair to Windsor, I was not in the mood. On another day it could have been great. 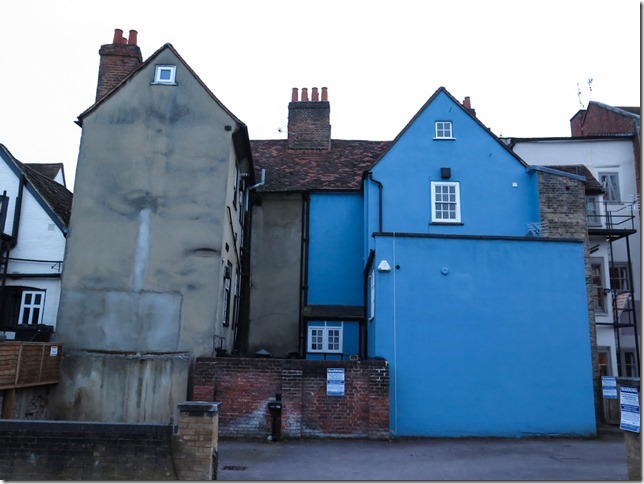 We did have a very nice meal in a small French bistro on the high street washed down with a very tasty bottle of viognier. With a whisky before bed, my day was certainly finishing far better than it had started.

Not having to rush out of bed on Thursday was a real blessing, and following up the late rise with a tasty full English breakfast was even better!

We made it out into the day just before 10:00, and were quite surprised at the amount of people the castle had already attracted. As I said, the castle dominates the town, and it was literally less than a hundred metres from our hotel to the entrance road of the castle.

The castle was originally built during Norman times to dominate access to a strategically important part of the River Thames, but became more important under Henry II in the 12th century. It is the longest serving royal palace in Europe and is still used as one of the main royal residences today. It is big, it is well preserved, it is awesome in its construction and I found it the most boring castle I have visited so far. It was all a bit disappointing as I had been looking forward to exploring it for a long time.

We had to queue for a while to get in, and pass through airport type security. I sort of understood this given its relevance as an active royal residence. It was expensive, at just over 19GBP each.

It did have its cool bits, I am a sucker for big walls and battlements. It wasn’t even too crowded, busy but tolerable.

But there was not much to see – there was a moat room. I passed two doors telling me so, I don’t know what was on the other side of the doors though. 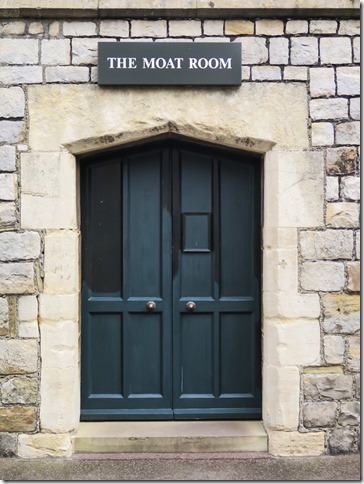 And we were all funneled along certain paths, no aimless wandering around and most disappointingly of all – no walking on the battlements.

We did visit the royal apartments – significant Georgian buildings, with some lovely art and lots of posh furniture.

No photos allowed though. But I did sneak this in an oasis of calm in the drawings room. 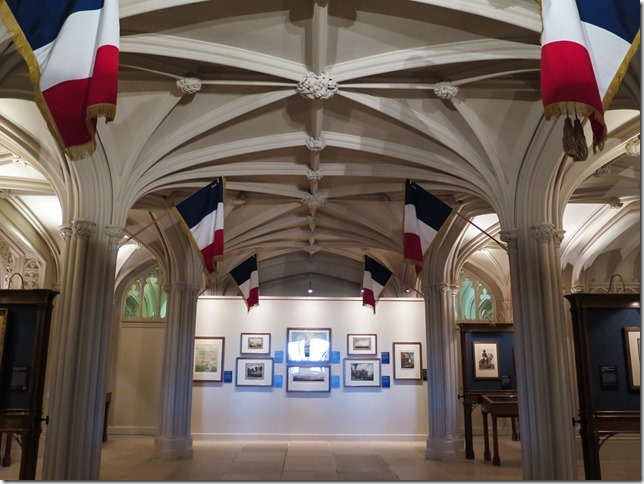 And this one out the window while the trooping of the colour was on. 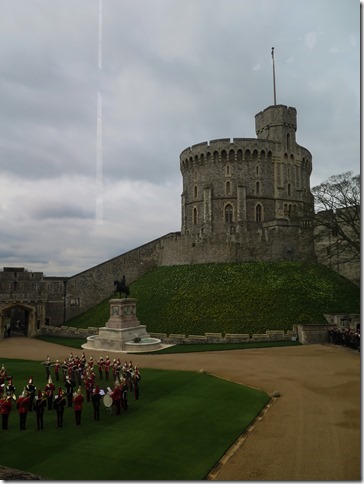 I sort of liked the Royal Apartments, though it was a bit sterile and knowing that part of this palace is actually the home to a very select few while so many live in poverty does make this seem somewhat obscene.

Back outside we caught the end of the trooping of the colour and the not small number of fellow visitors gathered to watch. I would hate to be here in peak time, it must be truly, awfully busy. 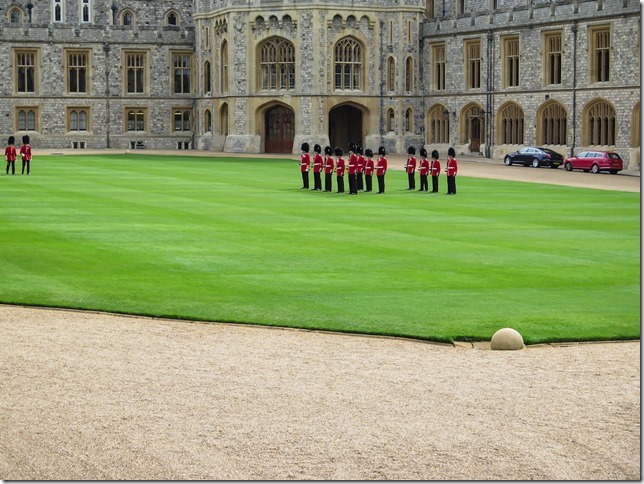 While the crowds watched the display I took a quick look around the outside of some of the buildings we were not allowed to enter.

Our last stop before leaving was St Georges Chapel.

Like the rest of the interior we were not allowed to take photos inside, which was a real shame as there are not many places with so many royal tombs inside, including some famous one like Henry VIII.

And that was our visit to Windsor Castle over, No wall walks, no poking around, clambering over ruins. No photos of suits of armour, old canon or other historical knick-knacks that occasionally catch my fancy. The fact there are more shops than toilets sort of sums the place up for me. A tourist rip off. It was a bit of a sham really, the Tower of London does this much better.

After such a big breakfast we did not fancy lunch, but we did stop for coffee, cake and a sit down before picking up our bags from the hotel and wandering back down to the station.

The view at least is pretty spectacular from anywhere in town.