Day 309, Thursday 08 November 2012 – Kudu Camp,
As seems to the tradition on this leg of the trip I was up far too early again, but today was all worth it, a game drive in the Ngorongoro Crater, something I have been looking forward to for days. The crater is a long extinct volcano that did not explode, it collapsed, creating a large natural bowl that is full of wildlife. A lot of the animals can get in, but cannot get out again. it is also one of the few parks where there are no giraffe – they cannot make the steep climb.

We were warned to take warm clothes as the drive up can get quite cold and while it was hardly freezing it did get a wee bit chill as we made our way up the side of the crater. On the way into the park we saw the only elephants of the day, and I have no photos as I wasn’t ready. The road in the crater is pretty bad so we have hired four wheel drives and guides to take us through. Our guide was Dave.

We stopped at a view point above the crater for a look down inside. Gorgeous !

At the view point we met a large group of Maasai men herding cattle and goats into the park, as I said in yesterdays post the Maasai are allowed to feed their live stock where ever they like. Naturally we were not allowed to take photos – though there was a funny moment when a bunch of goats made a run for it and the Maasai and half our group were trying to herd them back – ever seen a New Yorker in his sixties herding goats – I have…

If you look carefully you can see a Maasai wandering under the trees.

Not long into the game drive we found one of the things we were looking for – Cheetah ! and so did everyone else 🙂

This was shot at almost the full extent of 200mm lens plus the 2* extender, so it was a way off. The closer shots have been cropped – a lot, so not the sharpest. 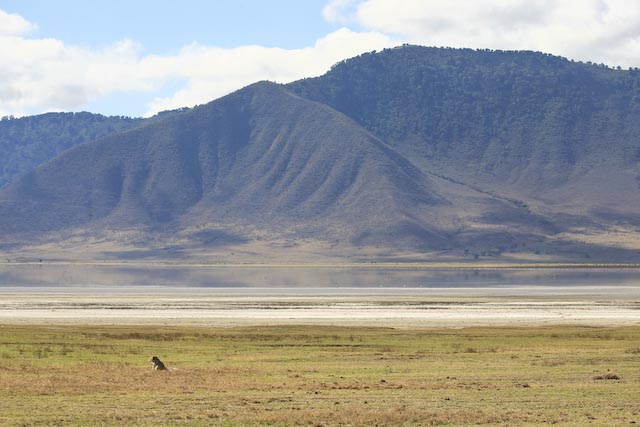 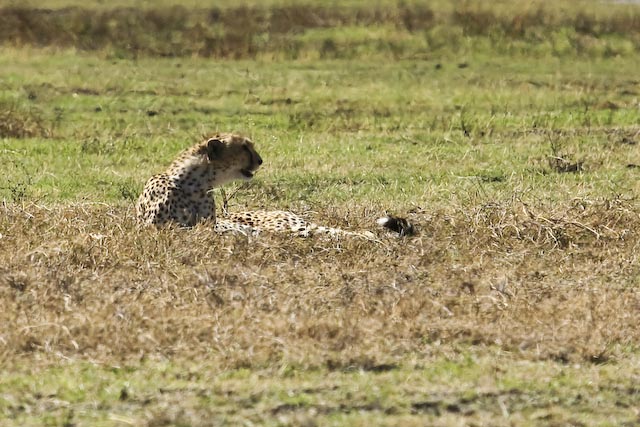 Awesome, we watched her (we think) for a while, but she didn’t seem to be that interested in doing much at all so moved on further into the crater.

A closer view of a hyena, though this one appeared injured as it was limping when it finally got up and moved.

We stopped for lunch by the hippo pool. We were all advised to eat in the vehicle as the kites will take food out of your hand. We followed the advice and then watched as a small group arrived and sat down by the pool side to eat. The kites were soon hovering over head – not that they noticed. We all got out to await some action, but sadly one of the other guides told them to get into the vehicle. We, and the kite, left disappointed.

We watched the hippos for a while – I have never seen hippos roll over before – something new. The pool was quite shallow and there was a lot in it, so I guess this is how they stay wet and cool. 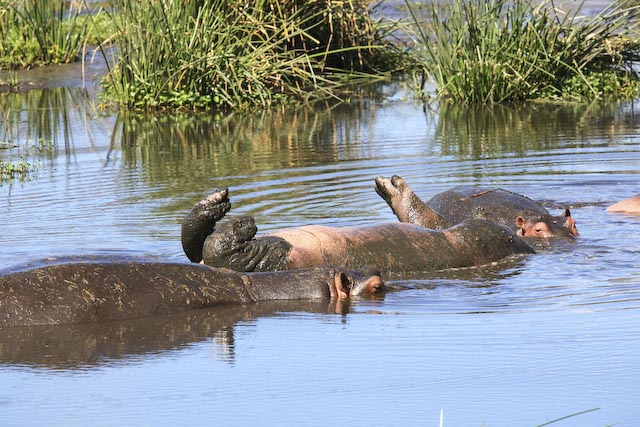 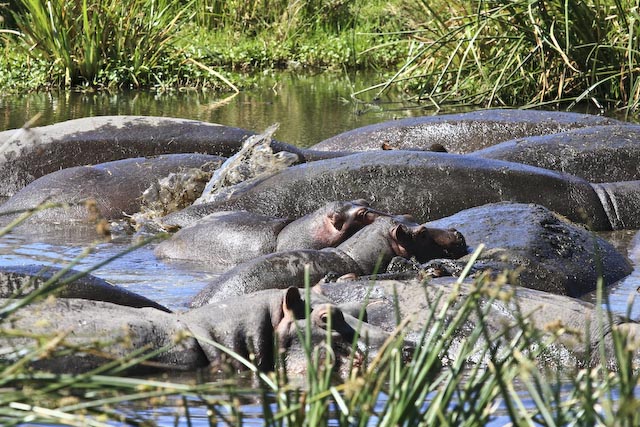 We saw Buffalo – but not vast herds.

Wart hogs (I still love them) 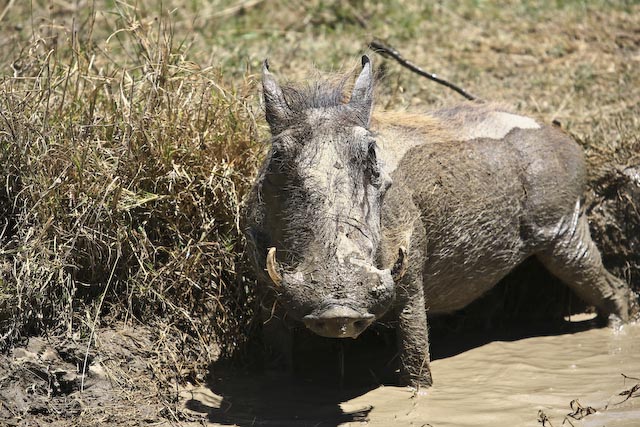 And the real highlight of the day – a lion at a fresh kill. 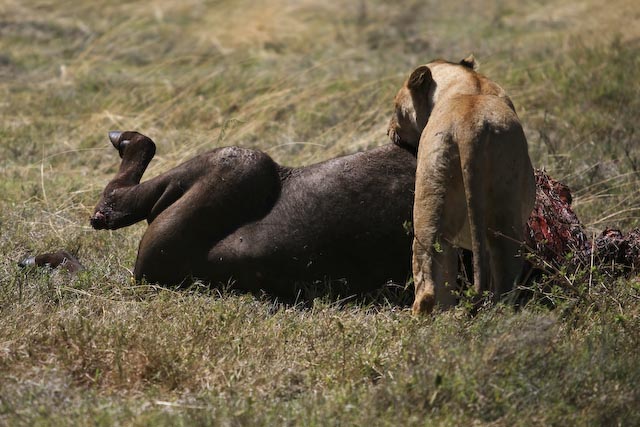 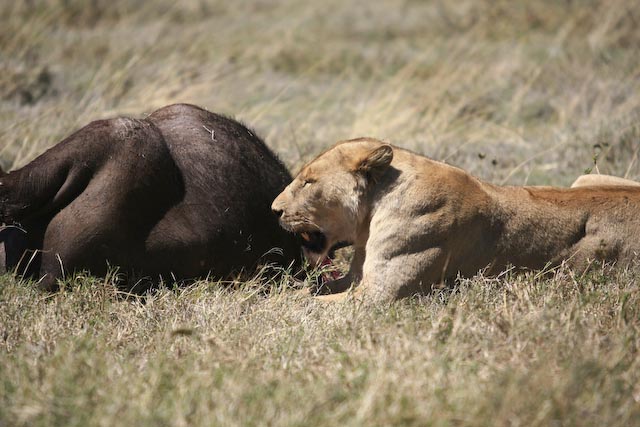 We soon found a lion couple resting in the wind. They took the opportunity of us all watching to have a quick shag on the road side. 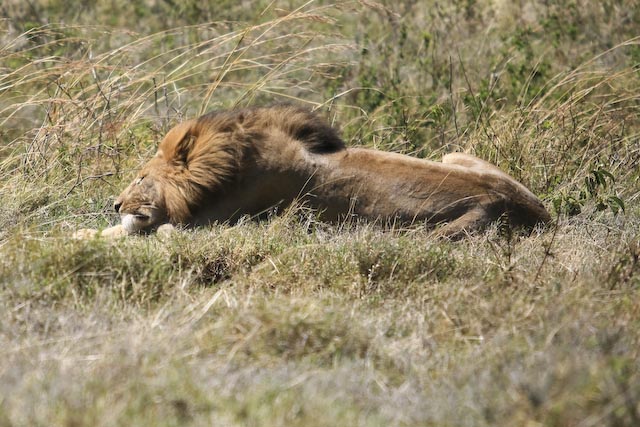 On the way out we spotted a white rhino – there are six in the park, it was a long way off and we waited for it to come closer but it refused, so this long distance shot is as good as it gets !

On the way out we passed the Maasai cattle herd, well more like we had to negotiate the cows on the way out, as they weren’t that interested in getting out of the way. 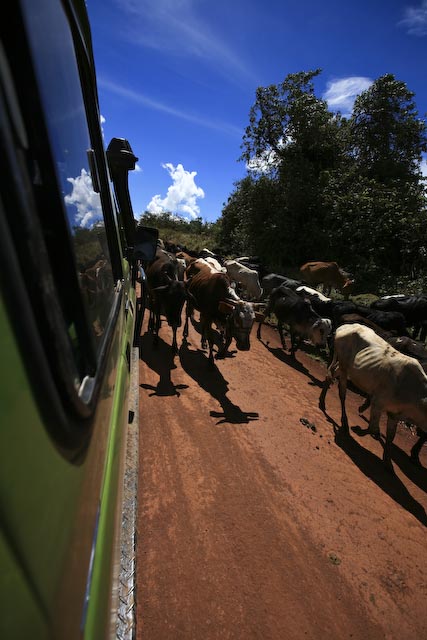 Once back at the campsite and getting chores out the way Will, Brett, Leonie, Nancy and I went into the village of Karatu and visited one of the local bars for a couple of beers in the sun. As dinner time approached we hired a motorcycle each to take us the kilometre back to camp, it was a load of fun, but the battery died in my phone before the bikes and it was the only camera.

(sorry, if you hate the photo, it is the only one of the five of us!)

I ate a huge meal, drank a couple of whiskies and went to bed. Another awesome day !