With Chinatown visited yesterday it would have been rude to not visit Little India and Kampong Glam, the historic Malay Muslim section of Singapore. After eating our body weight in hotel breakfast we were back down to the metro and off to Little India. Just after rush hour it was still quiet early in the day, particularly for Little India, and even more so for Kampong Glam.

Our first stop was the Tekka Centre, a must for anyone visiting Singapore. I always take a walk though here, often stopping to buy a snack, though not today after the amount I hoovered down during breakfast. The ground floor of the building is all about food, the outer ring being well patroned food courts and the centre a large fresh food market. The upper level is pretty much all about the sari, lots and lots, and lots of saris. With the occasional tailor tossed in to balance things out. The middle of the ground floor is a large fresh food market, selling everything from live (short lived) chickens, to fish and seafood and on to that wonderful range of Asian vegetables and fruit. Including the dreaded durian. It wa very quiet. 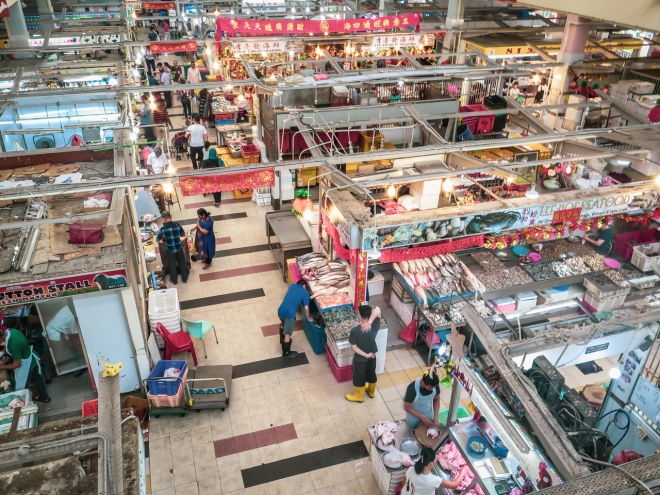 We did not stay long in Little India, there was not a lot open and not many people out and about, way too early. We crossed over towards Bugis and walked past the Kwan Im Thon Hood Temple. 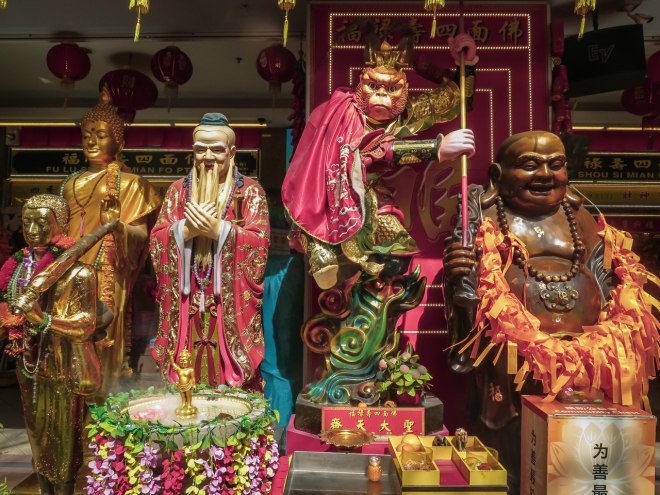 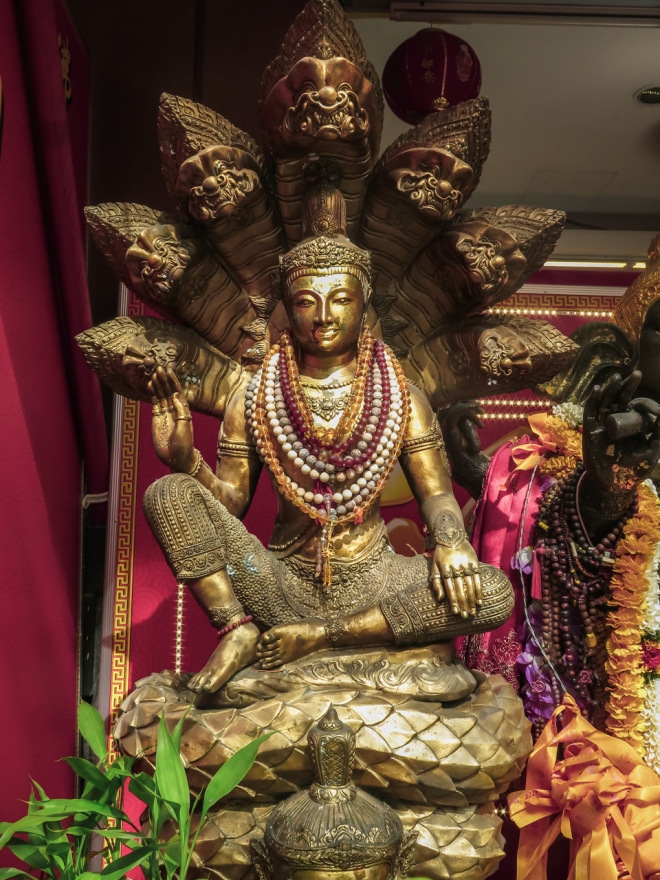 There is a lot happening in the streets here, and towards Bugis with quite a few market stalls selling all the tat you would ever need for Chinese New Year. There was a good mix of European tourists and Chinese here, probably the most diverse crowd we have been in since we arrived. 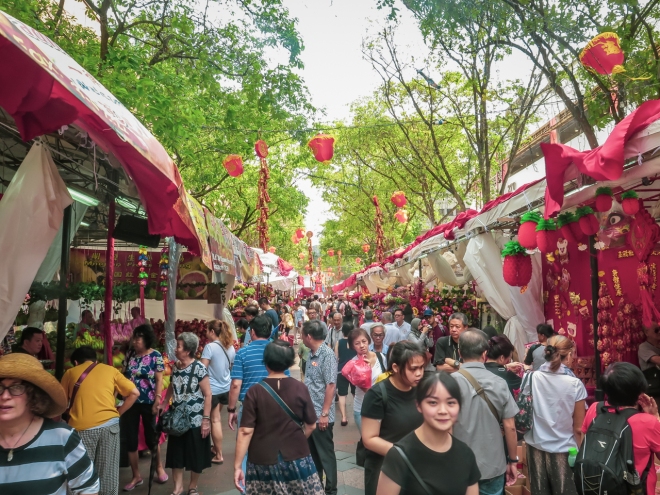 I like Kampong Glam, it is my favourite part of Singapore, mainly because it is the most hipster-ish east London area. It has changed massively since I last came here seven years ago. There are a lot more bars and cafes and a lot more street art. I still liked it, and if I wasn’t so tired all the time we should have come here one evening to experience it more fully. We found a Scandinavian coffee shop and stopped for the first flat white since we left NZ. It was good. 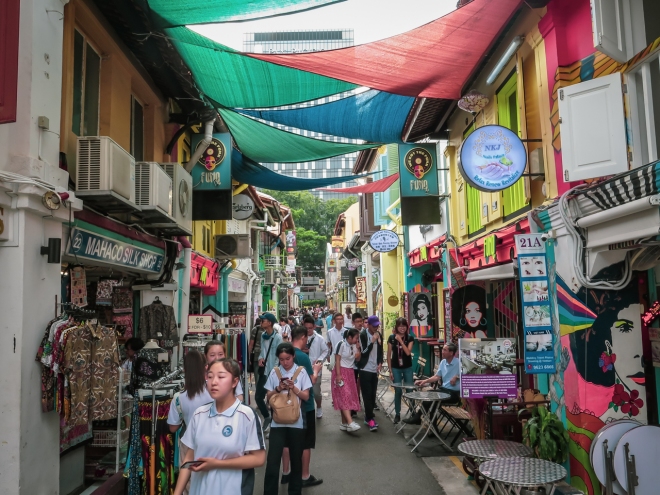 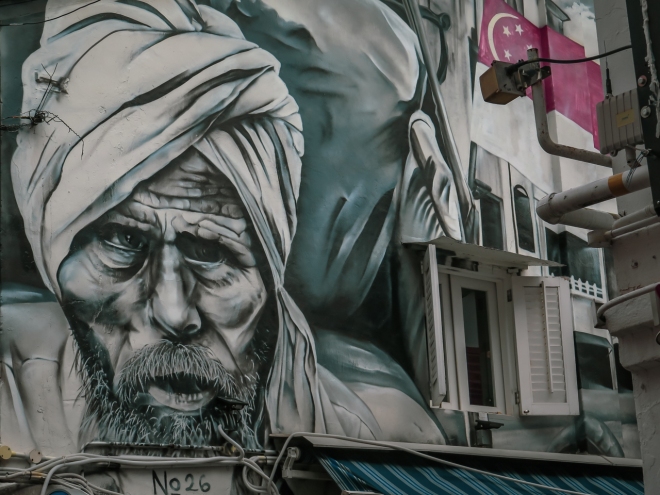 I like the contrast between the older shop houses and the ultra-modern glass towers, along with the very un-Singaporean awning on the sandwich shop. Public profanity! Outrageous! 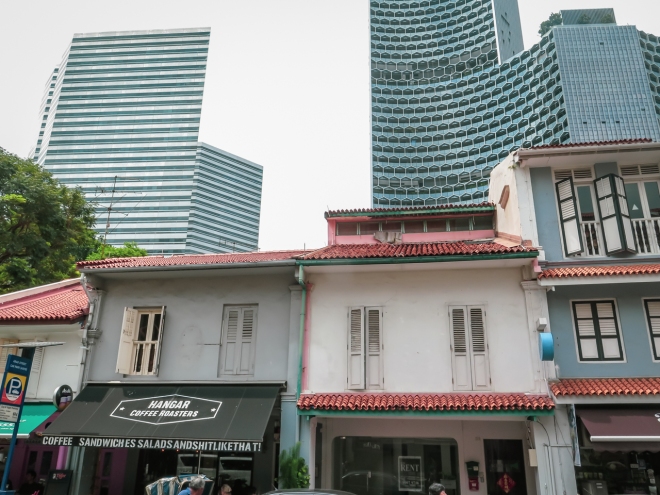 Leaving Kampong Glam we started a walk down to the City Hall metro station, it was getting quite warm, and time again to think about getting off the open streets. On the way we passed by the magnificent Parkview Square building. Being a sucker for Gotham Gothic architecture this is one of my favourite tall buildings anywhere. Straight out of a Batman movie. Belying its 1930s art deco look the tower is entirely modern, being completed in 2002. 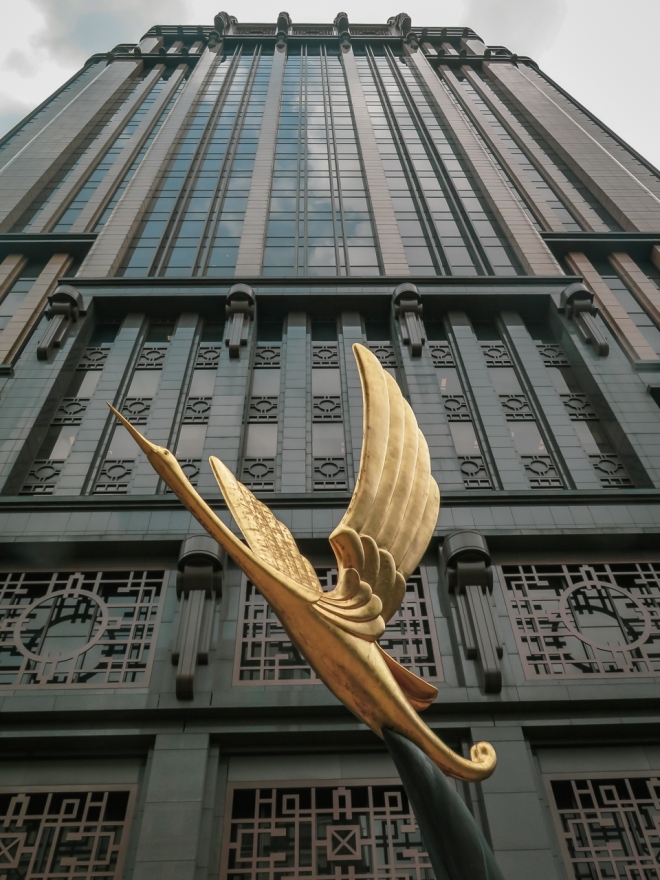 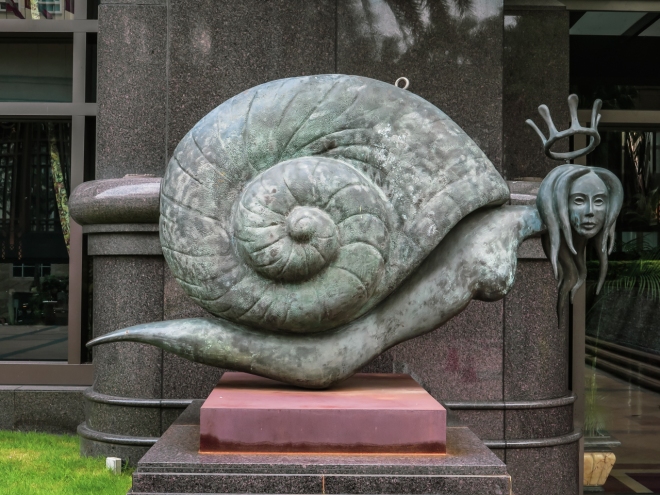 There is a small art gallery on the third floor, showing a collection of Chinese prints; we had a look but it was not really my thing. The ground floor lobby was pretty stunning! 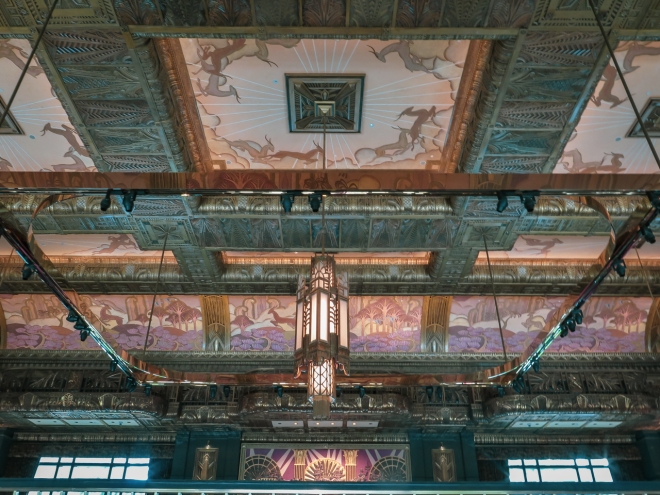 Continuing on the journey we happened to come across Raffles Hotel next to City Hall station. 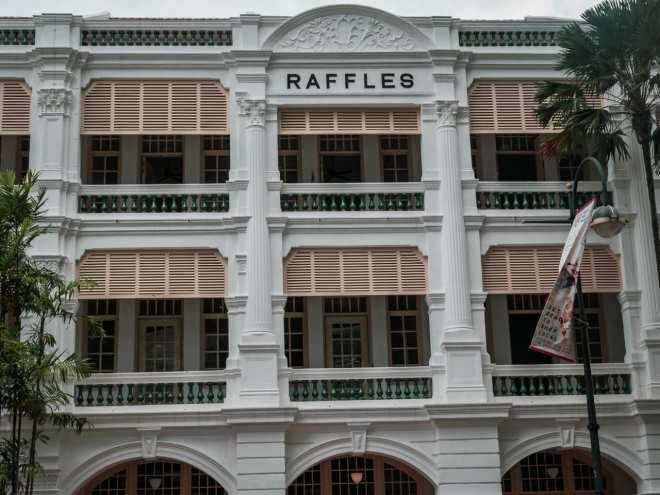 It seemed to be very rude to not complete the ultimate Singapore tourist task and go to the Long Room and have a Singapore Sling cocktail. Not being rude people, that is exactly what we did. All the tables in the Long Room bar have a large bag of peanuts for customers to graze on with their drinks. Shelling the nuts and discarding the empty shells on the floor is all part of the pleasure of visiting. The nuts were so wonderfully fresh, I ate quite a few, leaving a decent size sea of mess around me. 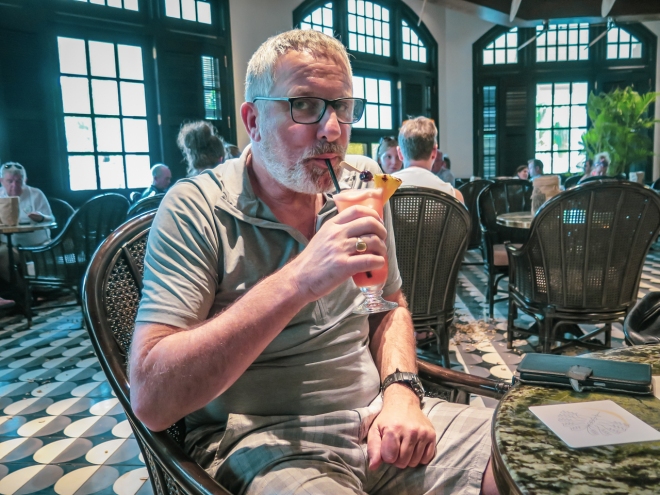 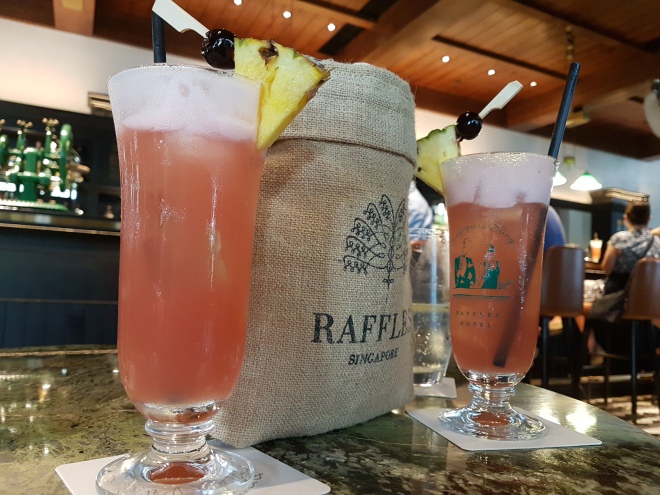 Today is the sixth anniversary of El and I meeting, so El had booked dinner in one of the restaurants in Marina Bay Sand Hotel. After an after of relaxing and writing back at the hotel we headed down to the metro and out again in to the late afternoon. We arrived early so had a bit of a walk around the marina. 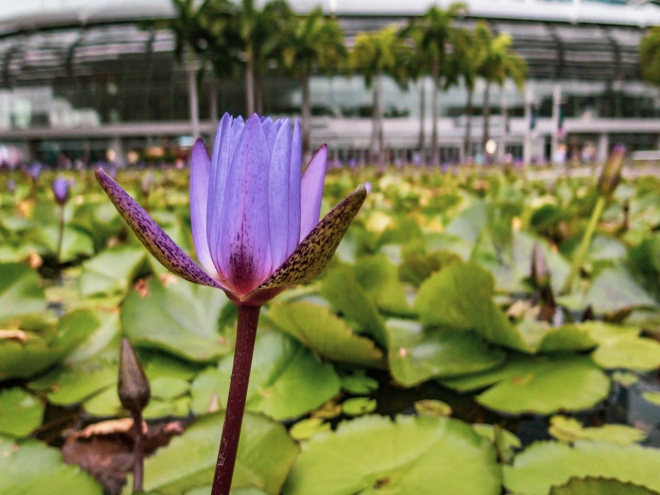 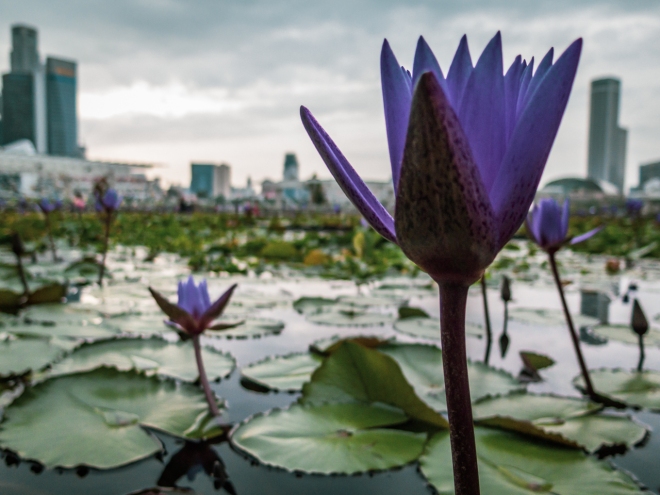 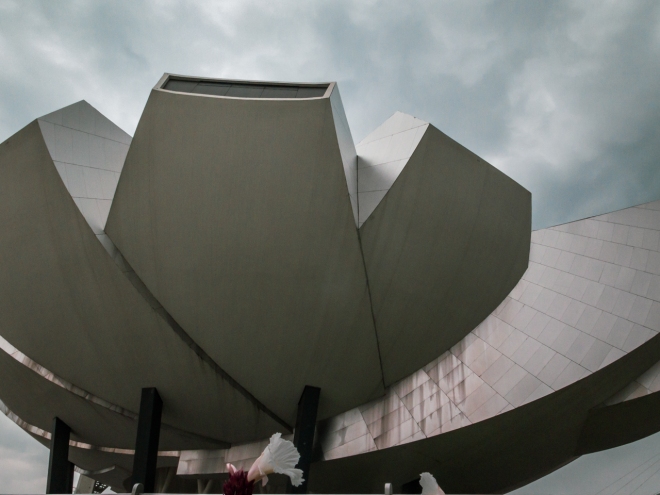 Walking through the mall to the hotel we passeda  very large and impressive DC comics shop. we were tempted to buy a little something to take back as gifts, but decided not too. 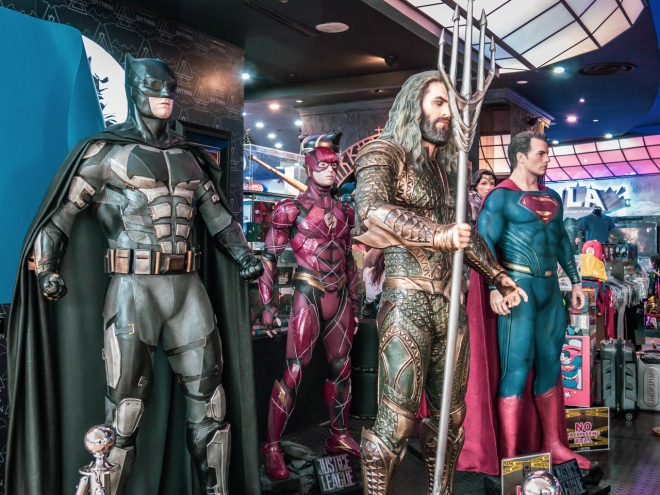 Dinner was early, it was the only table we could get at such short notice. The restaurant was an all you can eat buffet and was pretty amazing. There was a terrific array of foods, and it is fair to say I ate a lot. Including things I do not normally eat, like crab and lobster. I also got to have what turned out to be only laksa I had during the stay. It was very nice, I love laksa. nooodle soups in general. This will be another thing I will endeavour to cook at home. 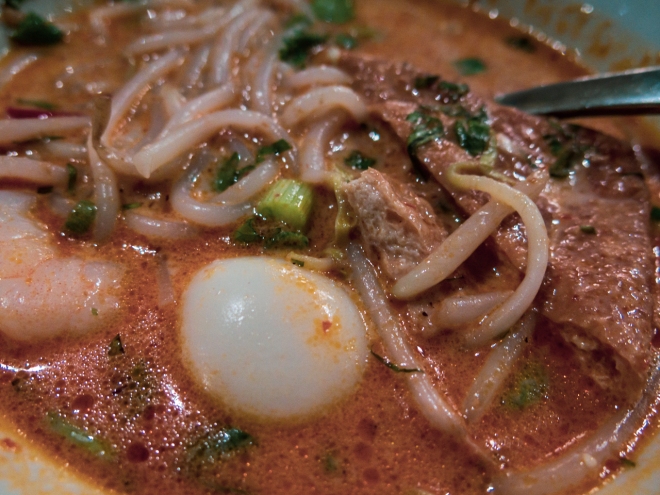 There is a night time light trail here, I was really looking forward to seeing some of the installations, but found it all a little uninteresting, though there are works over quite a large area of downtown Singapore and all around the marina. I was expecting BIG, but big was not the thing. 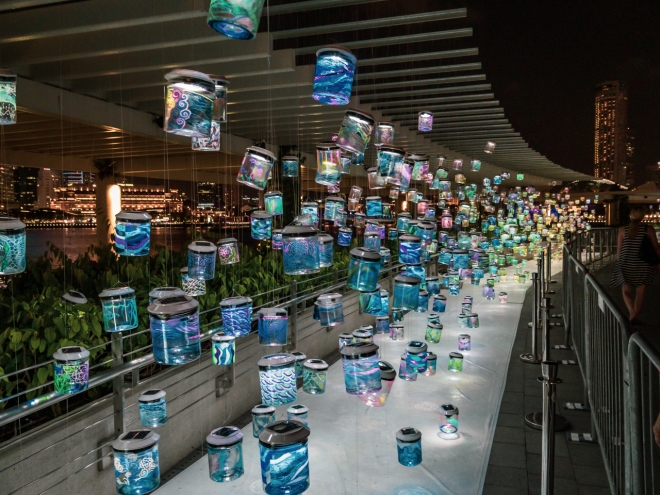 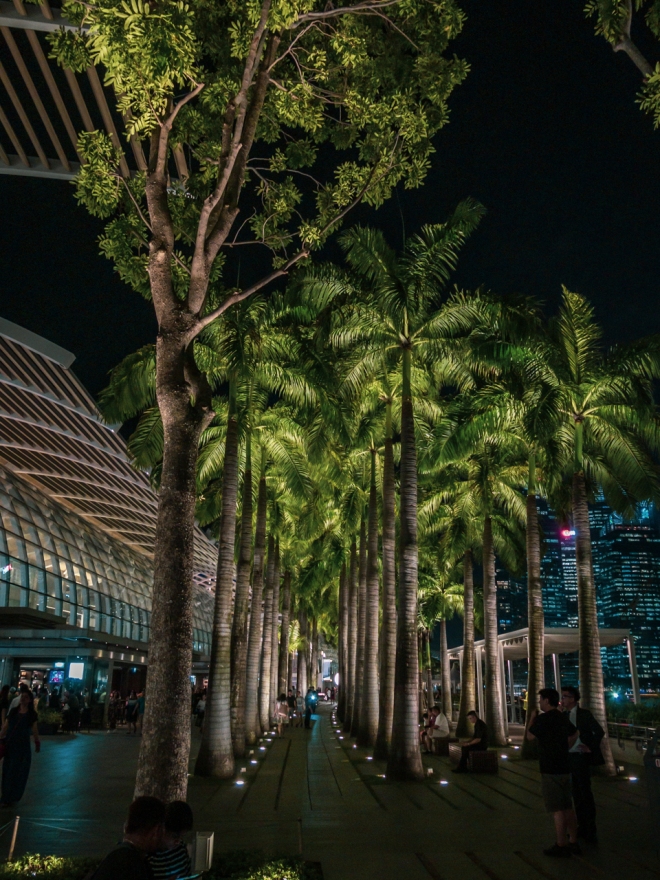 Saturday was our final day in the city, we had a whole day to kill before our evening flight back to London. We lingered in the hotel for a while, making the most of breakfast again, and the air conditioning. We had decided to take one of the city bus tours. I don’t normally do them, but found the one I did do in Dubai to be quite a good time killer, and we had a lot of time to kill today. The weather foreacast was not brilliant either, so this really made sense.

We jumped on one near the hotel and it took us to the massive Suntec Plaza where we had to wait for a different tour. The bus was not that interesting, there was a huge amount of traffic and it moved very slowly, mainly past the places we had already been. After consulting the map and we jumped off one bus and on to another heading in a different direction and ended up by the riverside. Something I wanted to do today anyway.

We found a riverside, and touristy, Vietnamese place and sat down for a drink and a couple of Vietnamese snacks and just enjoyed sitting by the river in the warmth, no work to do and no real cares. The last until our next holiday. It was a pleasant end to the afternoon, and to the trip. 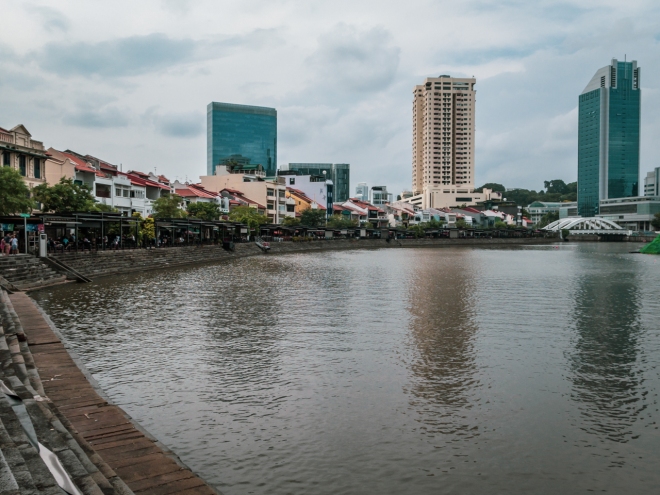 Soon enough it was back to the hotel, a shower and a change in the gym bathroom before a final glass of wine on the rooftop bar and then the airport and home.

It was a good few days, I am glad I got to share one of my favourite cities with El. We will come back to Singapore, it is an easy place to visit.