It was another early start to the day, considering it was the first day off between trips – my gorilla tour does not start for a week, so there is plenty of time to kill. Breakfast in the hotel was pretty good, though I did not eat much. I am not entirely sure how long the day will be and what facilities will be available – my stomach is only feeling about fifty percent normal, so caution it is. Plus I can do without eating like a pig three times a day!

Leonie has been sponsoring Mutoni a twelve year old Kenyan girl for a number of years through World Vision. As the village is only a hundred or so kilometres from Nairobi – and in an area not subject to tribal violence or the kidnapping of westerners by Somali gangs we are going to pay a visit.

We were collected in a World Vision (WV) Toyota Landcruiser by our host for the day Solomon. 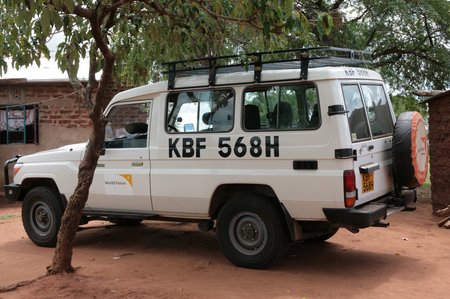 Solomon lives in the town of Yatta, where we are heading but had to come down and stay the night in Nairobi to be able to pick us up as the traffic here is notoriously bad. However, we were fairly lucky, the ride through down town to the “super highway” was slow but not too terrible. For safety, we were seat belted, bags on the floor with doors locked and windows up. It is not called “Nairobbery” for nothing and carjacking is not unheard of – though we did not see anything that raised any suspicion.

The super highway is a fifty kilometre section of new motorway from the centre of Nairobi and is a surprisingly good piece of road, they are still building pedestrian bridges across the highway so every few kilometres there is a section of speed bumps preceding a crossing. The only highway I have ever been on with speed bumps – amusing ! Nairobi is a big city, with the exception of Cape Town way back at the start of this journey it is the most western city I have experienced, there is a lot more apparent infrastructure here, a lot more permanent looking housing (well as permanent as Africa gets) and a lot more schools and universities surrounding the highway. Parts of it could easily be in New Zealand. 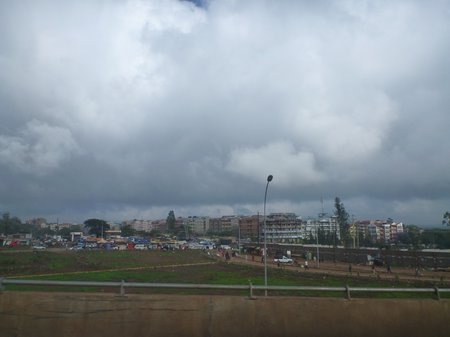 It is still Africa though and unlike New Zealand they just LOVE football – and by this I mean the game you play with your foot, not the one you play with your hands ! Manchester United is the most popular team in the world and it is easy to see why, there are posters, banners and stickers everywhere. 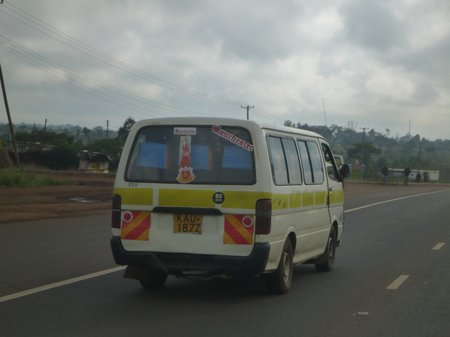 The highway ended at the town of Thika and we stopped at the local mall to do some shopping, part of the deal with WV is Leonie provides some supermarket basics for the family as a gift. I also needed to get some Kenyan cash and do some shopping for myself. The rain yesterday morning turned the Snake Park campsite into a bog and as we had heard that there had been heavy rain up in Uganda I wanted to get some cheap gumboots just in case, I had not replaced the jandals (flip flops) that disappeared in Malawi. I also wanted to get a Kenyan sim card for my phone, apparently the cell network in Kenya is very good. The sim card, 50 minutes of talking, 500 texts and 500mb of data cost me just over $9NZ, WOW – how can it be so expensive in New Zealand. They also had a very good range of Kiwi shoe products : )

From Thika we made our way to the town of Yatta where the WV office for the area is located. The road has a vast number of police checkpoints that we pass through without being stopped. They are mainly stopping the local buses coming from the opposite direction. According to Solomon they are looking for members of Al Shabaab a Somali terror group. I asked him how far away the border was and he said very close – about 800kms. I guess the perception of close in Africa is different to the one in NZ.

I think this mini-bus was a bit off course – Manurewa is an Auckland suburb!

At the WV office in Yatta we were introduced to all the staff and were given a morning tea. It is clear (and good) to see that the offices are not flash, there are no fancy trimmings or luxury here. The staff have different areas of expertise with the main being in food management and water and sanitation. WV provide some resource, such as wells, but focus on education and training, the old “teach a man to fish” scenario. I am not sure how hard they actually work though.

After morning tea we took a ride out to Nialani school to meet Mutoni. The school was about ten minutes from Yatta, and once off the main road we were on a rough dirt track, I now know why WV drive Toyota land cruisers!

The school had obviously been prepared for our arrival, and it was fairly obvious that WV have spent a lot of time working with the school. There were a few WV signs around the place. There was also a fair amount of Christian messages, though the state schools are agnostic. 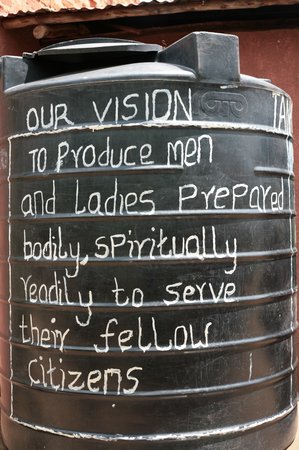 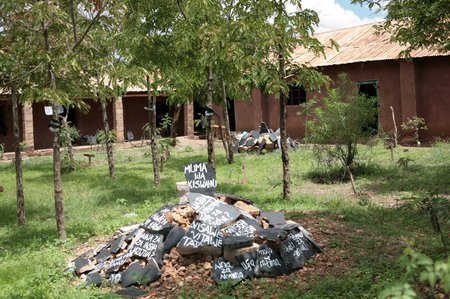 When we got out of the vehicle the children in the nearby classrooms came charging to the windows, laughing and calling “muzungu, muzungu”. Muzungu is Swahili and basically means a white person who wanders around aimlessly – which pretty much sums me up ! In most cases, like here, it is meant in good spirits. They very rarely get muzungus in Nialani and we were the highlight of many children’s day. I just loved the look of joy on their faces and the huge huge smiles. I don’t think all the teachers were amused by the distraction as we walked past the open windows of the classrooms. 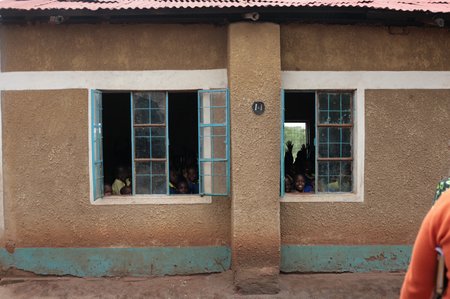 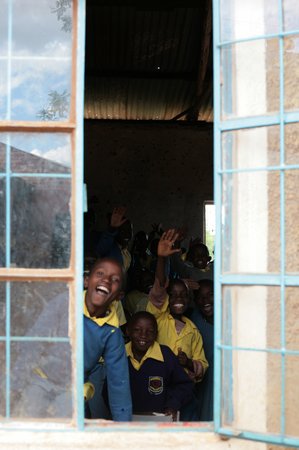 After visiting the deputy head teacher we were introduced to Mutoni and her class, she is twelve and was incredibly shy and embarrassed about the whole thing, I really felt for her ! We had to introduce ourselves to the class and the Mutoni had to introduce her best friend. I was kind of glad when we left and took the poor girl with us. 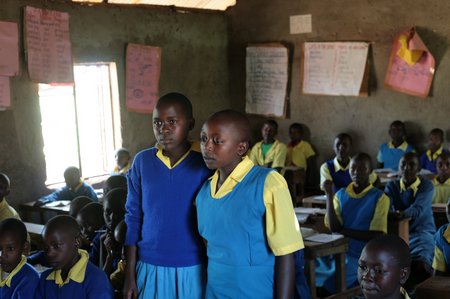 On the way out we walked past the new entrant class and they were very keen to see us and say hello, I am not sure if the youngsters in the last photo had seen a muzungu before, they look a bit wary. 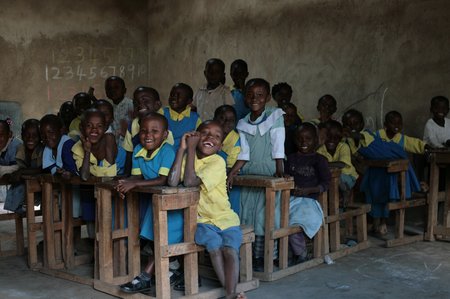 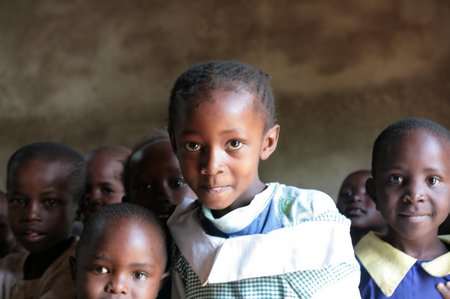 We drove out through the village to where Mutoni lives with her mother and grandmother, there are no adult males alive. Mutoni’s mother showed us around their small holding, the two houses and the separate kitchen. There is no electricity here so everything is done on a wood fire. This is the kitchen. 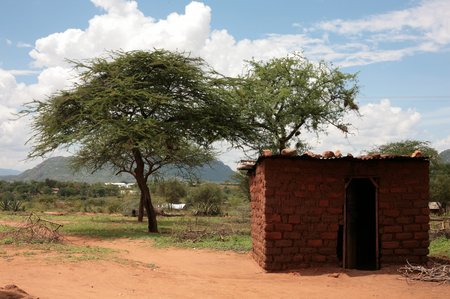 We presented the family with the food that was purchased in the supermarket, it was all fully documented by the people from WV, not entirely sure why and I didn’t ask.

We then all piled into the car and drove back to the WV office for a very large lunch – that was paid for by Leonie. Mutoni and her mother and grandmother obviously do not eat like this very often – they had a lot. We all posed for photos afterwards, Mutoni and her family had obviously dressed up in their finest while embarrassingly we were in our normal scruffy travelling clothes. 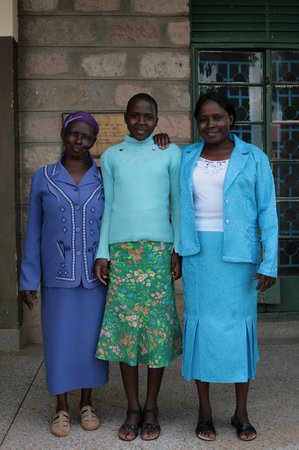 It was mid-afternoon now and time to head back into Nairobi, the drive was not too bad, a lot of traffic once we hit the centre of town. There are a lot of half finished buildings on the way, a lot just have a single storey completed with room for a second to be added. In many cases families will start to build a house as soon as they have money, if they have enough for one wall, they will build one wall. If they don’t use it then there is a chance the money will just get wasted on booze by the men, saving for a future is not common here, for many there is not much of a future to save for.

Once back in the hotel we had a quick dinner and then I sat in my bed and blogged for a while.

It was an interesting day, it was good to travel into a part of Kenya where not many westerners go.

I am using a new version of Blogdesk to put together the posts before I upload them. They have changed the way adding photos works, the sizing is different to how it used to be, I liked the old version better – grrrr, sometimes change is not good!

2 thoughts on “A trip into the Kenyan countryside.”