A massive sleep was had last night, I didn’t fully wake up until 7:10 when I had my first real coffee in a few days. I joined a number of the others in hotel restaurant for the buffet breakfast – eggs, beans and chips on a deck overlooking clean white sand and a crystal clear Indian Ocean. Heavenly. The grease was followed by fresh mango and pawpaw, in the last 2 days I have eaten more fruit than I have in months. I will be healthy again in no time; well maybe if I skipped the chips anyway.

The others all left on their snorkelling trip an hour before my dive trip started, so I just lay down and enjoyed some more peace and quiet. 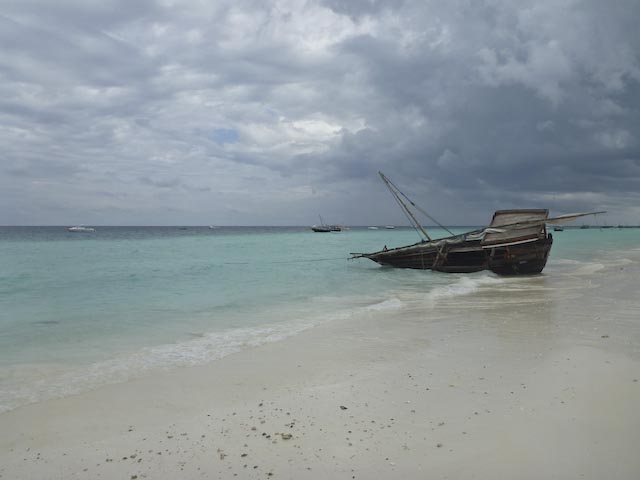 I dived with Spanish Dancer Divers, there were seven of us on the boat along with the staff. Sadly the sea was not as icy smooth as it was yesterday which made for a bumpy ride to the first dive spot – Leven Bank. The site is an underwater hill, it does not penetrate the surface and I have no idea how the guys find it as there are no visual indicators. Must be magic!

On the way a small pod of dolphins was spotted by one of the crew so we donned masks and fins and jumped in to see if they would come and play. Unfortunately they were not in the mood and swam out of reach soon after we were in the water. I did manage a long distance snap of them near the bottom. It was the closest I have come to dolphins and it was pretty damn cool – I had a mega grin 🙂 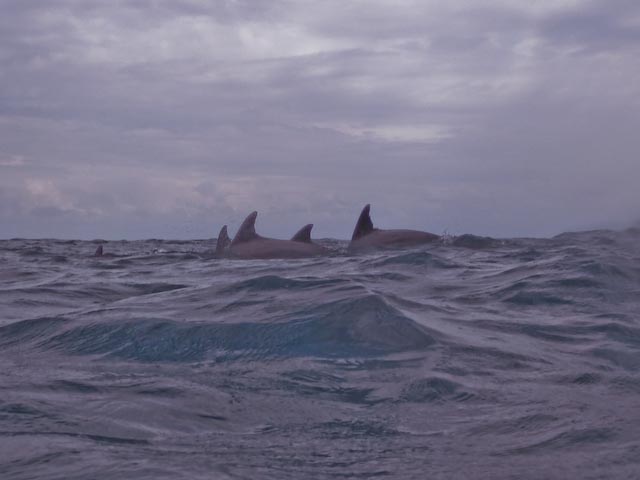 The first dive was a deep one, as there was quite a current and a bit of a swell we did not faff about on the surface, just straight down to 30 metres. Visibility was pretty good considering the current, it was a drift dive so we just floated along near the bottom and let the current take us where it was going. I struggled to get buoyancy for a bit and used up air more quickly than the others but I was happy with my first dive in nearly six months. Apart from one really large moray eel I didn’t see anything new or exciting, but it was great to be down below again. When my air hit fifty bar The dive master took me up to the five metre decompression stop and I stayed there hanging on to the dive buoy line for three minutes and then drifted to the surface while the rest continued the dive. I was soon picked up by the boat. It was rolling quite badly in the swell and for the first time – possibly ever, I felt quite nauseous, though I did manage to not vomit. Unlike the next person who got in the boat.

As we motored towards Mbwangawa, a reef dive site, a large storm passed over the island and just past us out to sea. We could see the pouring rain from the distance and fortunately managed to skirt the whole thing.
Mbwangawa is a shallow off shore reef dive that was slightly sheltered from the wind so was less choppy than the open ocean dive. It was a good dive, I was sorted in the water and stayed the full 62 minutes. It did get pretty cold towards the end, even with full length wet suits on. We saw quite a few moray eels and a really large ray under a shelf. The coral was quite unusual, it was long flat and plate like – not anything I have seen before. It was cool just drifting along beside it.

After the diving I took a late lunch in the bar and waited for the football to start, Manchester United v Arsenal (the team I support). It was two minutes to kick off when the power went out. Bugger!

The power did not return until after the game had finished, which was probably a good thing as we lost 2 – 1. We all met in the bar and sat around chatting until dinner at 7:00 at Baraka, a local beach restaurant. The food was cheap and the lobster curry was as delicious as the calamari curry I had last night. We even got a free drink !