I had left the rest of the group soon after dinner last night to grab a few minutes peace and quiet after the long long day on the truck. I also planned on a massive sleep as I was feeling tired and the early mornings were starting to have an impact. Obviously that plan was thwarted! The security guard from the camp and some of his mates decided that 4:00 am was the perfect time to cut coconuts and talk really loudly in the middle of the campsite. This was followed at 4:30 by the first call to prayer for the day, the east of Tanzania especially around Dar is strongly Muslim. I did manage to doze again until get up time at 6:10 – this was a lie in !

After a quick breakie I packed a small bag for the three day trip to Zanzibar, a trip I have been really looking forward to. Like Mandalay in Myanmar, Zanzibar is one of those exotic locations from childhood adventure novels that I have long wanted to visit and today was to be the day. Naturally the day started with us getting on the truck, though this time it was just a short ride to the harbour side to get the very busy ferry a short distance over the harbour to down town Dar es Salaam. From the truck we had a five minute walk down to the ferry terminal, it was 7:30 am and hot and humid, a few of us were starting to leak a bit as we hit the large sprawling mass trying to squeeze through the ticket stile and into the larger congested mass of commuters waiting to board the ferry.

The ferry ride was short, it is only a couple of hundred metres across the harbour, but we had seats by the side so it was interesting viewing the going ons in the harbour – like other developing countries there were a number of people bathing in the water, a dangerous activity ! 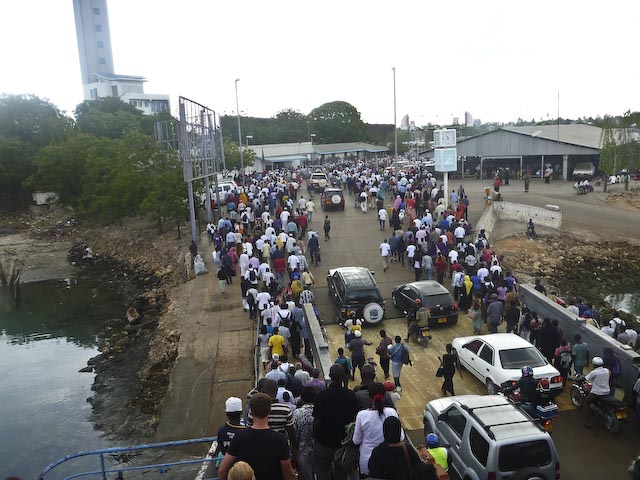 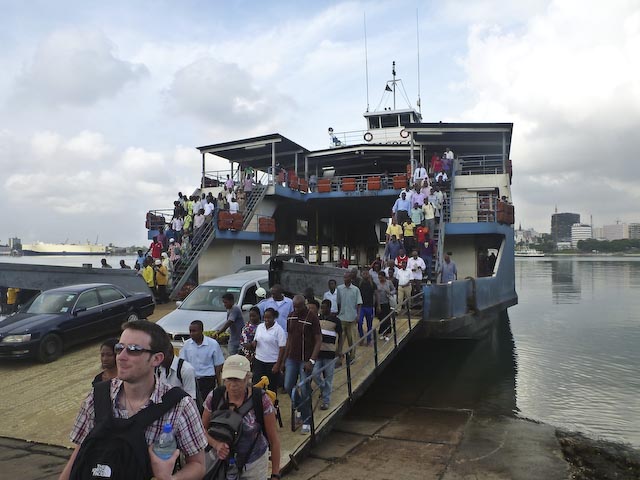 On the other side of the harbour, Brett hired a local bus to take us the few hundred metres to the Zanzibar ferry office. It was hot, humid and crowded and easier to keep us all together if we were in a bus.

The state of the vehicle left a lot to be desired, tape all over the place holding panels together and all the seats were damaged in one way another, mine had basically nothing underneath the vinyl seat cover.

Getting out of the harbour side was interesting, six lanes of cars trying to squeeze into two lanes through a gate, nothing unusual there of course! Unlike Asia this was done in semi-silence, very little honking of horns and people seemed to good humouredly jostle for spots in the road. I am surprised though were no accidents while we were watching.

We had almost an hour wait at the ferry terminal so a few of us walked to the ATM to get some Tanzanian Shillings, however the machines do not accept MasterCard so I had to change some of my precious cash resources which was frustrating. TIA – This is Africa.

The ferry was one of the modern quick cat ferries, though the ride was fairly slow, there have been a few ferry sinkings on the Dar – Zanzibar route. 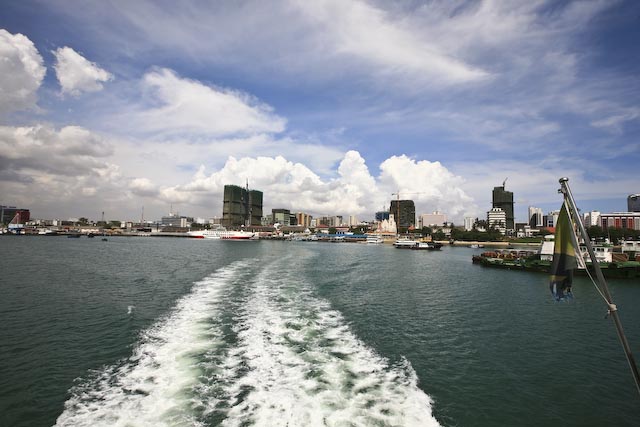 The sea was like glass all the way to the island and it was a magic two hour ride, lots of dhow in the water with some great clouds and a cool sun rainbow. 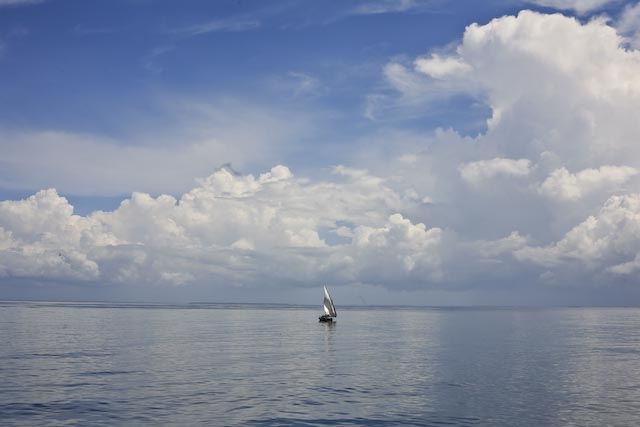 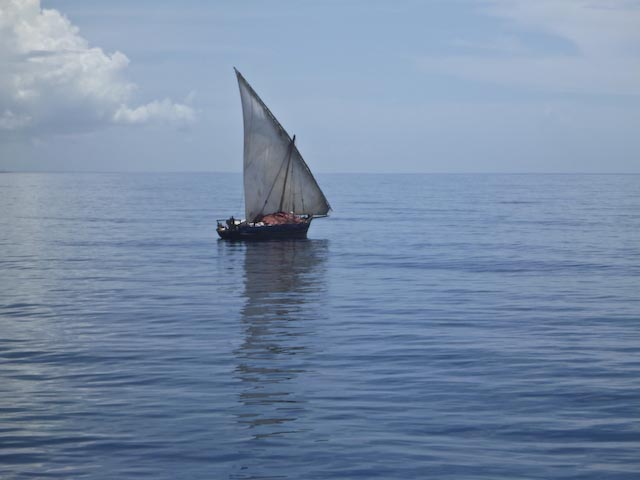 As we approached Stone Town onthe island of Zanzibar I was very excited to see white sandy beaches – I knew this was a tropical island, but I must admit I was not expecting it to be like this. 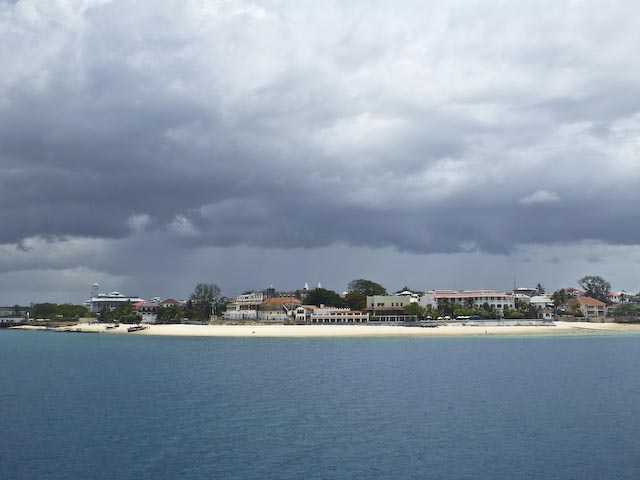 We alighted the ferry in Stone Town and once clearing Zanzibar immigration we jumped on an airconditioned mini-bus for a forty minute ride to Big Body’s Spice Farm. 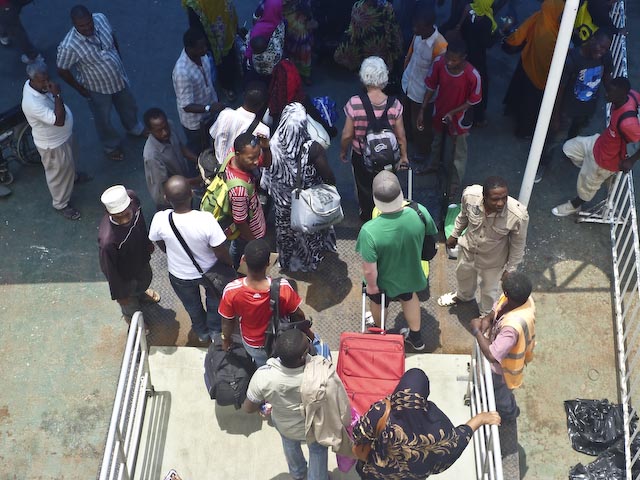 Hmm the Hajj. something else to add to the to do list…

After the relatively hot and boring tea plantation tour the other day I was not overly excited by the prospect of a spice farm tour, but wow – what a difference a tour guide makes. Big Body was very engaging, quite funny and had great English. He stunned everybody, especially the Polish girl in our group when he broke into some rapid fire Polish.

It was a great tour, preceded by a nice curry lunch and some local fruit tasting. The pineapple was the sweetest and juiciest I have ever had !

At the end of the tour we were all presented with palm leave hats, ties for the boys and jewellery for the girls. It was a great couple of hours. The ride to the hotel was about an hour, the mini-bus driver was not scared to put pedal to the metal and fist to horn, just like Vietnam again – though a wee bit safer, I think. We are staying at Amaan Bungalows, a beach side resort in Nungwi village. The resort is budget but surprisingly nice, large and airy rooms and a great bar area.

After unpacking we all met in the bar, surprise surprise, it was half price cocktail hour so good value.

We had dinner next door at Langi Langi restaurant – or rasta rant as they called it.

The food was great, I had a very nice calamari curry, it was beautifully flavoured. After dinner a couple of us stayed for a whisky or two in the bar before an earlyish night.