Up before six this morning, slept very well for a beer sleep ! Got myself organised and went out for breakfast and back again for a five minute snooze before walking down to Angel Divers for my day of diving. I chose Angel as they were competitively priced and had great reviews on the Tripadvisor website. I have been using Tripadvisor a lot lately, more so than the guide book when it comes to checking out accommodation. I think it explains why I am ending up in guest houses that are not full of back packers – which may sound good to some, but is actually a bad thing in some ways as I am isolating myself a bit. When I shift up to Hanoi in a few days I will move in to a proper backpacker hostel and hope to find someone to travel to Laos with.

The day was an odd one, I was a bit frustrated with some initial lack of organisation from Angel, we got to the boat on time and away from the dock, but the gear was all over the show on the boat and it all seemed a wee bit ad hoc.

However reflecting back over the day, most of the staff were very professional, the gear was in good condition, I have certainly had a lot worse – so I think my first impression was actually the wrong one, though briefing on the first dive was a bit loose…

We motored out to Hon Mun island, about 45 minutes from the mainland, the conditions were perfect for diving, a very gentle, cooling breeze and clear skies. There were ten divers, five on courses or learner dives and five experienced divers. The first dive I was with a group of three Germans (max four per dive master), the dive was Ok. The coral has been destroyed here and there was an Ok amount of small life and we saw all the usual suspects.

In some ways it was a good first dive back, as there was not a huge amount to see I could focus on buoyancy and technique – which set me up well for the second dive.

While we waited for the beginner divers to come back I had a wee play with my little camera Panasonic FT3, it is only rated waterproof to 10 metres so I cannot take it diving, but I jumped into the sea and snapped a few photos.

The second dive was at Madonna Rocks and I have to say it was fun. It was just me and JC and French Canadian dive master, so I got see a lot more things. The highlights of this dive was three cave swim throughs, the longest was five or six metres. JC swam though so smoothly and I was banging the walls with my legs and my head and felt such a mumpty. I guess if you dive daily then you get good at it ! In the first cave there was a nice size grouper as well which was most cool and the second cave had a large school of shimmering small fish which would have made for a superb shot.

We motored over to Mushroom Reef for the third and final dive of the day. We had to wait for a while before diving so the Germans and I had a bit of fun diving off the roof of the boat and bombing anyone who was in range. I also went for a brief snorkel and took a few snaps – and got burnt by the sun. 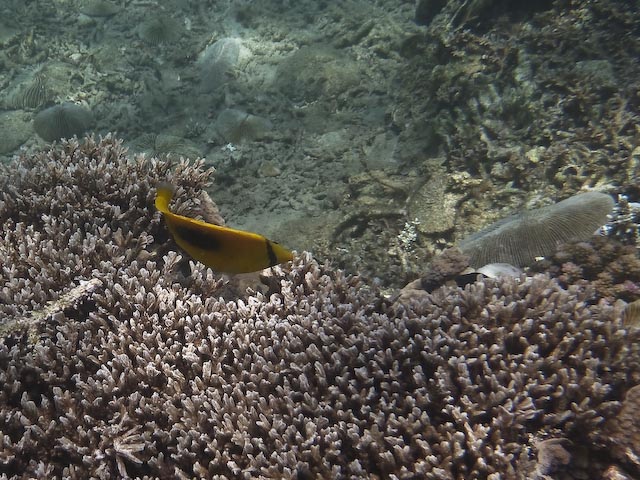 A sea urchin similar to the one I put my hand on while diving in the phillies – wont do that again ! 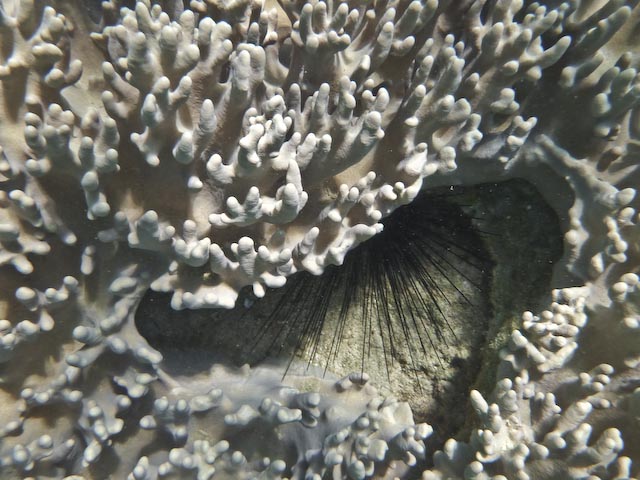 The third dive started off a bit dull, just rolling along a fairly deserted sandy area, but once we got into the reef it became a lot more interesting, again it was just JC and I and I had my buoyancy pretty dialled on this dive so I could just hang in the water as we looked at some of the things of interest. Highlight of this dive was a good size moray eel that was out of his hole and moving around the coral, very nice to see, and apparently quite rare as JC was really pleased to see it. I am really enjoying just being able to spend time looking closely at the coral and the small life within it, there is an amazing array of small fish, shrimps, crabs etc going about their business, it is quite cool.

We motored back into port and parked with all the other tourist boats.

And were all picked up by a van and taken to a local restaurant for a reasonable lunch and then dropped back at the shop around 3.00. the diving was not spectacular, certainly not up to an El Nido or Semporna, but I had fun today, it was a good group and the DM’s were pretty good. I decided that if I could postpone my train ride to Da Nang till the day after tomorrow I would do one more day of diving. I could so I did….

My hotel have been great at arranging trains for me, I am assuming they get some sort of commission for booking tickets, but the receptionist here has just been so nice and simple to deal with, her English is fantastic and nothing is a problem. It makes life so much easier. She arranged for a train ride for the following day and secured me the bunk I originally wanted but didn’t get for tomorrow, its the details that matter sometimes.

I found this little critter outside my window.