I was up at 6.00 after another bad night, in future I think I will stay in smaller sized dorm rooms if I have a choice, especially in these towns where there is a tendency for other travellers to stay out drinking all night. As I had no idea how long it would take for me to get from the hostel in Chinatown to the airport I wanted to leave nice and early rather than miss the flight. Yesterday I had taken the step of checking with the airport bus company as to what time they start running on a Sunday morning and what frequency they ran, so for a change, I was informed !

Even at 6.30 on a Sunday morning there were a lot of people scurrying around Chinatown, on the way to whatever business they had, no drunks though. There was a nice sense of peace around and it felt perfectly safe to stroll the streets. Near the station I came across a couple asleep – side by side, on their backs on the footpath next to their motorbike, they were sleeping with their helmets on. Must have gotten tired and just decided to sleep, it was quite bizarre.

The trip to the airport was quick, cheap and painless and I was easily there on time. For a welcome change I had my first McDonalds breakfast since I have been away, muffin and hash browns, just like at home! The flight to Langkawi was an hour long  and the plane was full and I was crammed into a middle seat with no leg room, next time I will pay Air Asia the extra two bucks and select an aisle seat so I am not so damn squashed in.

The Meritus Pelangi Beach Resort is at the lower end of the price range and is one of the older resorts on Langkawi, it is huge and my room is 476 paces away from the main area, at least I will get some exercise to balance all the eating I plan on doing! The reviews I had read online said things are expensive in the resort and they charge for everything as well, seems to be a true, a meal package of lunch and dinner with one drink was 129rm. I walked the 15 minutes to the main strip and had lunch for 6.50. People also commented on the place being tired and worn and I will disagree with that one, my room is great, especially after the 10 bed dorm! It is big and airy and has hot water and I do not have to share my loo with anyone else, and real sheets with big fluffy pillows, ahhhh luxury. 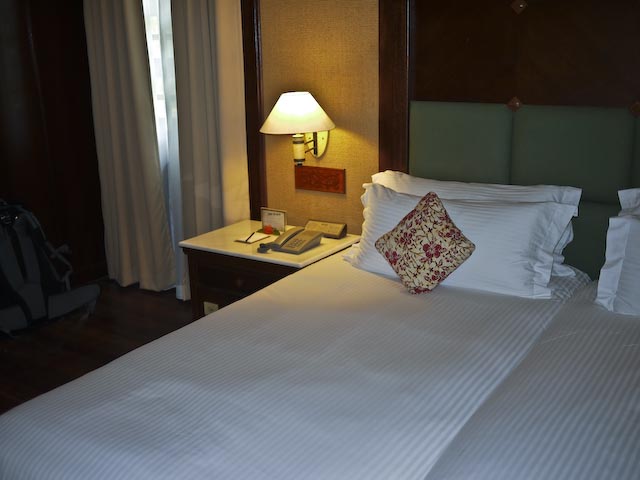 I took picture this as soon as I walked in the door, 5 minutes later it looked like my daughter, Meliesha had been living there – clothes and crap everywhere, it was very unlike me, but oh so nice to spread out.

I took a walk along the beach and had lunch at an Indian place in town and then headed back for a look around and a lie down, I really must try and spend the time I have here relaxing, I am not planning on seeing any of the sites of Langkawi, just the beach, the pool, the bar (where free wifi is) and local the cafes. I need a good couple of days to refuel with some good food and rehydrate as I have not been drinking enough water, those plus some good sleep time and I should be ready for another few weeks of travel.

The beach at the resort is very nice, lots of coconut palms and white sand. Sadly the skies are grey and not crystal blue. 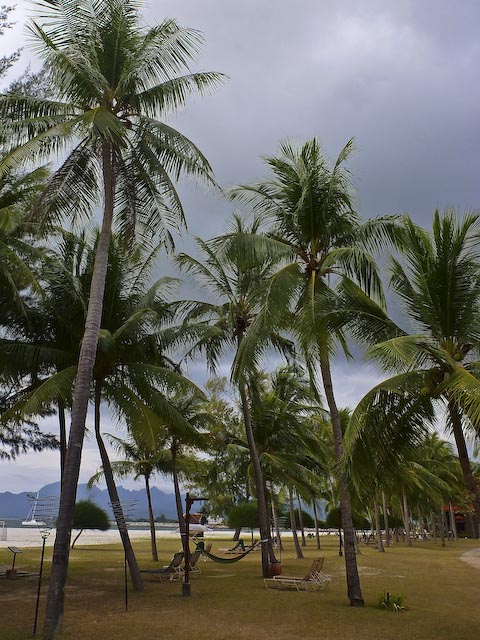 Next to the resort is a small river that is the home to a number of small fishing boats. If I get a cloudless day there will be some great photos here.

After a snooze I wandered back into town to the local laundry and handed over all the clothes I had with the exception of what I was wearing. I also picked up some washing powder so I can wash what I am wearing when I get my clothes back, I also bought some really cheap beer – Langkawi is a duty free island. I had a very nice Thai chicken and cashew dinner and went back to the resort to use the internet. I had a good couple of hours on the web and four glasses of chilled Chilean red wine. Sooooooooooo nice to have a wine again, though not ‘cheap’, same as NZ bar prices so I coped 🙂  What I did not count on was the 10% service charge when I got the bill at the end of the night.

I think I am the only single person in the resort !

Some post-rock awesomeness from the now sadly defunct Aussie group, Laura – and no, it is not all melancholy ! http://www.youtube.com/watch?v=I9mfxf0mOnU