Up early and finished packing my life into my backpack and messenger bag, it just fits, not much room for too much shopping though. The day was overcast and drizzly, but calm enough for a boat trip. Alex dropped me off at the jetty and I was solo and on my way !

The ferry seats about 100 people but there was only a dozen or so on board.  I was so pleased yesterday to read it was air conned, but man, it was absolutely freezing inside, the first thing I did was get my polyprop on. The boat made its way up the Sarawak River which is quite brown from the amount of soil that gets washed into it from the rain, there was a lot of tree and plant material and sadly a fair amount of rubbish floating by.

Out in the open waters of the South China Sea there was a reasonable swell which we ran across for a couple of hours so it was a rolling ride for a while. 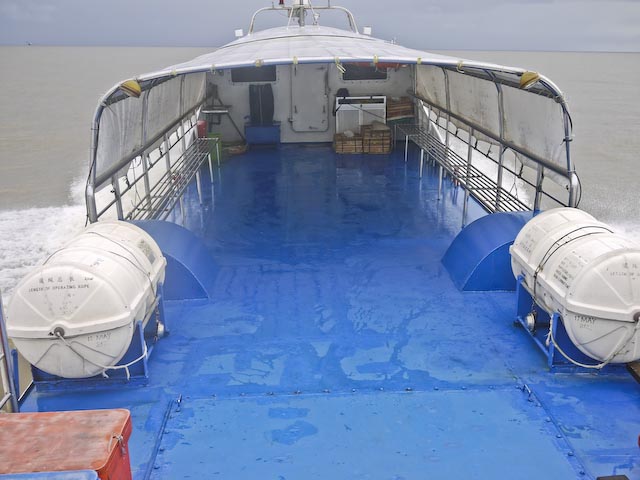 Sibu is about 130km up the Rejang River, the river is the main highway into this part of the country and up into the highlands.   Logging was the primary activity up river for many years and this has now (apparently) been restricted somewhat for more sustainable activities. However, there were masses of logs stacked up along the river bank near the mouth of the river and at many stations as we travelled up river.  The rain really started to pour heavily as we neared Sibu and for a while visibility was almost non-existant, though it settled to a mere downpour as we arrived in town.

I chose the Li Hua hotel as recommended by the Lonely Planet, I had to take a twin single room, as that was all that was left. A bit more than I wanted to pay but still cheap, plus it was easy to find and close enough that I did not get soaked. I had to stay the night in town as the boats on to Kapit only go in the morning, the hotel seems Ok, TV and air con, all the key ingredients.

I spent some of the afternoon wandering around town, through the markets and by the port, there in this not a heck of a lot to see so I went back to the hotel for a snooze and watched “the marine 2” with Tem Morrison as the lead bad guy on TV. Yes it was crap.

The market had a stall selling live chickens, ducks and geese, individually wrapped in newspaper, i didn’t see this in Kuching.

Wrapping the chicken, she was quite gentle, though practical !

I headed out again about 6.00 for a feed and to see if any of the local bars were open and packed with other tourists. None of the bars in the guide seemed to exist anymore or were closed and I have not seen one other westerner all day ! Hope there are some in Kapit as i do not have enough cash to hire a guide to go further upstream myself.  I bought a couple of beers and went back to my room.

Just discovered free wi-fi so blogging time 🙂 and here it is.