St Leonards is constantly changing, gentrifying, and in my mind improving. I know not everyone agrees that the gentrification of this, or any other area, is a good thing; but hey, I am a property owner and anything that increases the value of my investment is a good thing! I am a middle aged, middle class man who likes, and can mostly afford good coffee, nice wine, good beer and music. Therefore I am very supportive of the addition of places that provide those things to St Leonards, even if the price of a pint is a lot more expensive than others.

Since I have moved into my flat the only closed pub in the St Leonards has been renovated, reopened, renamed as The Piper and rebranded itself as a live music bar and venue. It is very much my kind of place.

I popped in their for a quiet pint last time I was down and ended up staying there for five drinks, it was the sort of place where I felt comfortable sitting alone with my laptop and writing. In that case one of the many blog posts I managed to write that week. They were also playing some of the best music I have heard in a pub – almost as if they had been referring to my Spotify playlists. I have been back since, but not staying that long again.

They started having bands play a few weeks ago, a couple of really good acts have played there, including Toy, one of my current favourites, so definitely a place to be excited about. Tonight they hosted Night Beats, an American psychedelic/garage rock three piece. Though this is my sort of music I had not heard of them before, so this was a very good reason to head to a new favourite ‘local’ and go see a band, or two.

Last week I bought myself a new camera, something to be covered in the next post, so I it along tonight. It is pretty low end, but I was hoping that as it is new technology it would have better low-light capabilities than my other cameras. I was pleasantly surprised.

I got to the venue about an hour after doors opening and was a bit gutted as to the very small number of people there, however by the time the support band, Strange Cages, came on the crowd had expanded enough for there to be a good atmosphere.

Strange Cages are from Brighton, I had checked out a couple of tracks on Youtube and didn’t like them, but will always check out a live band. They were much better than their Youtube clips gave them credit for, and subsequent listening on Spotify proved their youtube presence is bad. Their last track was a long jam, reminding me a lot of early Pink Floyd, but the synth was a bit too twiddly for me. They did however, have the best drummer I have seen in ages, extremely aggressive and very talented. Worth going to see them for him alone. Though naturally I have no photos of him, mainly the front man. As always 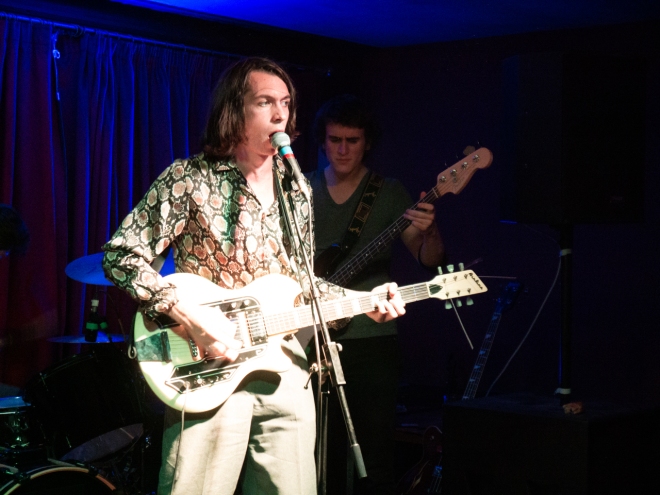 Night Beats are just starting a European tour, so I guess this is a bit of a warm up show for them, small venue in a small town. The place was full one they got on the low stage, though I had not left the room between sets so was close enough to take photos before the crowd made its way in front of me.

The lighting was terrible, as is always the case in small venues. Why do they insist on those awful red or blue lights?

I had fun, they are a good band, live they were a bit more 60s garage rock than full on psychedelic rock. A good night out.