If you read the previous post then you will know how I was feeling this morning when I wrote it, not overly positive. However, the weather is reasonable; there is some sun forecast, so I chose to beat some of the blues and get out for a decent walk and pick up some bits to cook for dinner. Walking was a good idea and I felt much lighter by the time I returned. I had a route in mind that passed the only known piece of brutalist architecture in Auckland, the University of Auckland Medical School, so I packed the big camera just in case.

We are currently looking for somewhere to live for a few months after we leave the ‘modern loft style apartment’ in a couple of weeks. I find looking for accommodation stressful enough as it is, but it is a lot harder in lockdown as we cannot go and see anything.

We found a flat we both liked, which is not a simple thing, and registered with the rental agency. It is in a new build block in Grafton, far enough from the city to be away from the noise, yet close enough to be able to walk to work. It has two bedrooms and we would both have a space we could occupy during the day where I wouldn’t get in the way of Eleanor working, assuming work from home continues to be a thing.

I took a walk by the building again this morning and still liked the look of it. Which turned out to be a bad idea as we were advised late Friday that we didn’t get it as someone was willing to rent it for a year; something we are going to be up against a lot I suspect. Oh well, back to the drawing board at the weekend.

The flat was on the way to the Med School building, the first destination for today, and it turned out to be a major disappointment. It was definitely brutalist, or had been before some sort of modernisation took place. The external fabric of the old part of the building is that classic brutalist concrete, though it doesn’t have many of the harsh angles and features you see on London’s Southbank or Barbican, or maybe they are now covered by the new cladding and extensions? There was some great pipe work though. Along with loads of pre-cast concrete, having some of the usual interior bits as part of the exterior is a classic component of brutalist architecture. 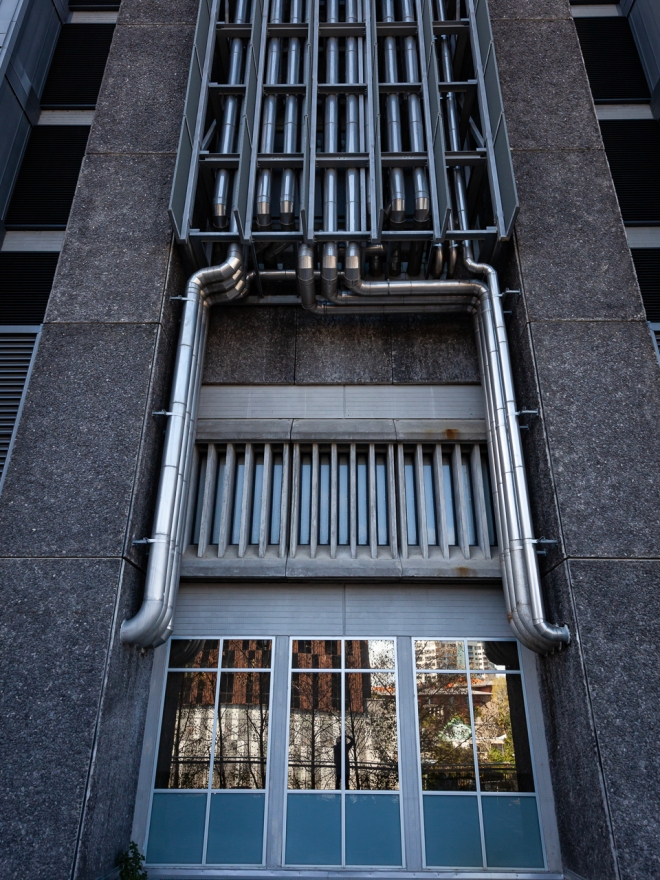 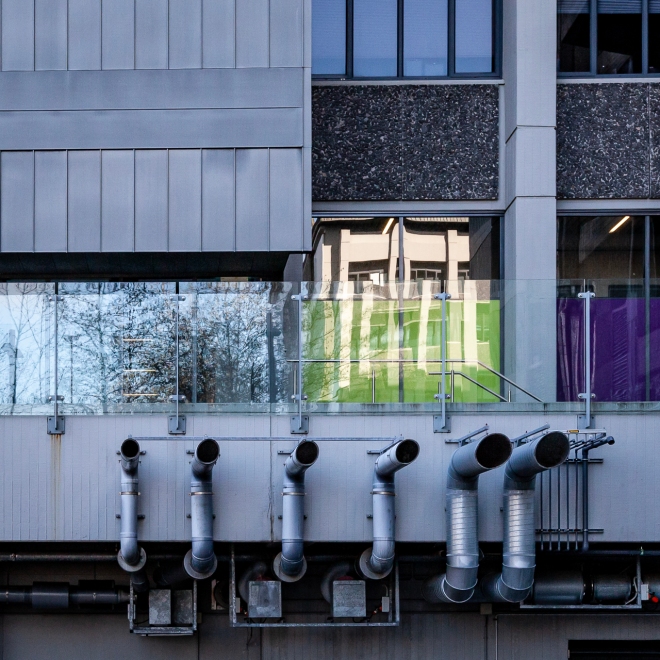 It was still nice being able to walk around and not have loads of people getting in the way of photos; one of the only benefits of lockdown I guess. It is a shame the building has been extended and re-clad in places, hiding some of its true and brutal nature. I knew I was going to be disappointed by the architecture of Auckland city, and so far I have not been disappointed in my disappointment. To be fair we didn’t return to Auckland for its buildings though. 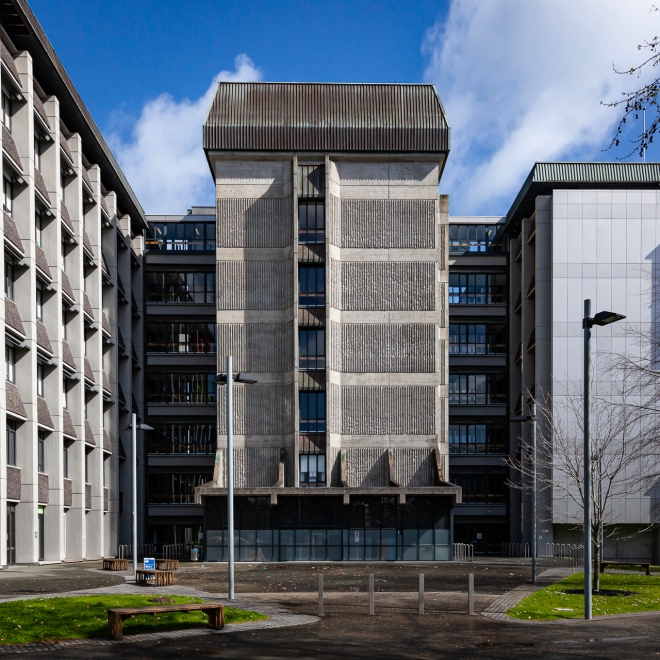 It was really nice to find some silver birches at the back of the building, they are lovely trees, though they are considered weeds by many in the UK as they grow so prolifically. Hopefully they will remain scarce and environmentally controlled in New Zealand. 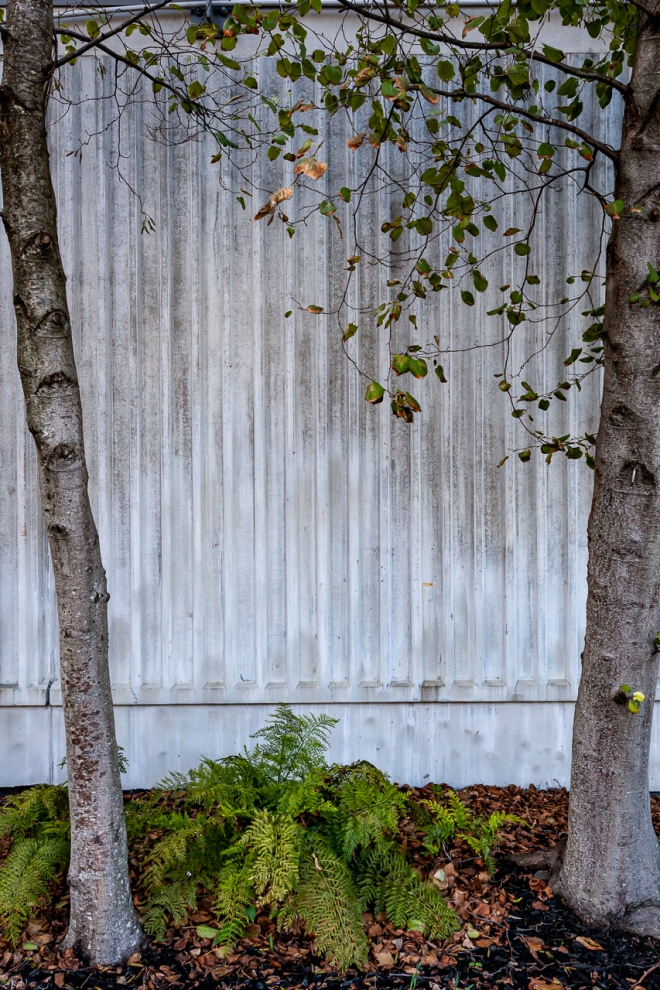 My onward trip to the supermarket took me through Auckland Domain and past Auckland Museum. The domain is a large park with small formal gardens and the lovely glass winter gardens; reminiscent of the Victorian buildings in London’s Kew Gardens. Alongside the formality of ‘proper’ gardens there are rugby and football fields, which double as summer cricket pitches. It is Auckland’s oldest park and a wonderful inner city green space.

One of the choices we need to make is where to live, and one of the key components of that decision making is green space and places to walk. Auckland is blessed with lots of green space in and close to the city centre, as well as a harbour within an easy walk from downtown. This makes choosing to live near the city a lot more logical, and also means we can get away without needing a car for a longer period. All we need to do is find the somewhere that will have us on a short term, and one we can afford.

The supermarket in Newmarket is inside a shopping mall, and it was a strange experience walking though a mall when all the shops, apart from the supermarkets, are closed and there are so few people around. A part of me wishes going to the supermarket was always this pleasant.

The streets were very quiet as well, also very much to my liking.

The walk perked me up a bit, a good two hours of strolling and taking photos was good for my soul and I am pleased that I did it today, and pretty much every other day too.