I was planning on writing this post the day after I finished writing the last one, which in itself was written a couple of weeks after I returned to London. Too busy with Christmas; with any luck I will have this all done and dusted by the new year. Not that I have anything much else to say, new year, new start and all that.

My flight from Dubai to London was not until 2:50 am tomorrow. I had already paid for one night in the hotel I did not use much as I arrived early on Sunday morning, so I did not want to pay for a second part night. This meant I had to check out today, though, thankfully not until 12:00.

When I originally decided to stop in Dubai on the way home from New Zealand I was thinking about a trip into the Arabian desert. I have been in deserts before and the emptiness is something I am fascinated by. Before I went out yesterday I spent some time on the internet searching for tours that looked interesting, but did not find anything that appealed. Lots of companies do 4-wheel drive trips from the city, but all mixed in with sand boarding, quad biking and shopping opportunities. Maybe they are fun with a group of friends, but not something I would do on my own. I was more interested in a more educational type trip, but could not really find anything that did not have terrible reviews. So I binned the idea, though I still had a very long day to fill….

I came up with a loose plan that had me lounging in the hotel until just before chucking out time at 12:00. I left my pack in the hotel and headed out into a very warm day before ducking down into the cooler metro for a ride into the centre of the finance district. Most of which was along one strip of road, narrow but high. Very high compared to London!

I foolishly decided to walk to Jumeirah Mosque, the main mosque in Dubai and then on to the ‘nearby’ Jumeirah Beach. Of course nothing is nearby in Dubai, I should have realised this yesterday. I was better prepared today, plenty of water and sun blocked up before I left. What I didn’t have was a hat, and it was scorching in the sun. There was plenty of that as there was very little shade on my walk.

Not far off the main strip there is a large section of land that has been cleared and I guess there will be a lot of building going on here over the next few years.

As I got further away from the city it was clear that that empty strip probably contained the houses of workers and inner city poor and that those communities had been bulldozed in the name of progress. It was not long before I was walking through the older and more run down part of town.

I did pass this really nice mosque next to the Iranian hospital. One of the frustrations with walking around Dubai is the roads are really big. Great if you are a driver, less if you are a walker. I suspect there are not too many walkers here, a bit like Queensland in Australia, lots of land for roads and it is too damn hot to walk anyway. Sometimes it was difficult to find somewhere to actually cross roads and I had to make a few dashes here and there to make like a chicken and get to the other side.

I eventually found the Jumeirah Mosque and was pretty let down with how un-spectacular it was, I must admit to expecting a bit more. It is still a nice building, just not very glossy and shiny.

The city of Dubai is quite narrow and runs along a massive stretch of beach. My next stop was Jumeirah Public Beach, just around the corner from the mosque. I was planning on getting to the beach, stopping for lunch and a cool drink and then walking along the sand for a while before getting a bus or a cab to the Burj Al Arab tower.  I did pass this, sadly closed, shop selling traditional Emerati food. 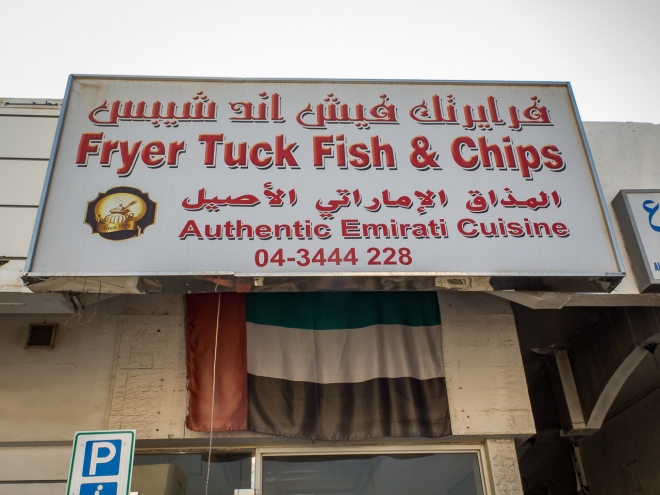 I walked for ages, it was early afternoon and very hot, I was starting to feel my face melting in the sun. There just seemed to be no access to the beach. I finally came across some building works,

eventually finding a sign that advised the beach has been closed since October 2014. I am guessing they will not be calling it a public beach once all the apartments have been built on it. I was a bit annoyed. My experience had in no way been enhanced.

I walked back out to the main road, and after a few minutes walking finally managed to flag down a cab and gratefully flopped into the back seat and out of the sun. I asked the cab driver to take me to the Burj Al Arab tower, which turned out to be a hotel that had no access to the public. I thought there was a viewing area from the hotel, but was obviously very mis-informed. I was equally annoyed with that too! I walked up from the hotel to a public access section of the beach so I could take the all important and overly clichéd photo of the hotel. It is a great looking building.

As I was standing on the beach an open topped tour bus pulled in and disgorged a load of tourists. I decided that as I still had 12 hours to kill to my flight I may as well jump on the bus and just cruise around the city for a while, it was cool, moving, had free water and was going to all the places I wanted to go. I should have done it when I left the hotel, would have saved me a cab and a long walk. Oh well, that will teach me for being a tour snob!

The next stop on the bus was The Palm Jumeirah. I am not sure how to describe this place. You need to see if from the air, or on a map to appreciate it. It is a massive man made complex of apartments, hotels and streets built into the sea and from above it looks like a palm tree. It is quite amazing. At the end is the ‘Atlantis’ hotel. Quite spectacular.

Everything is big in Dubai. With that much money and space and cheap labour there is not much point in building small. As I mentioned above, all the main roads are huge, and the billboards are just as big. 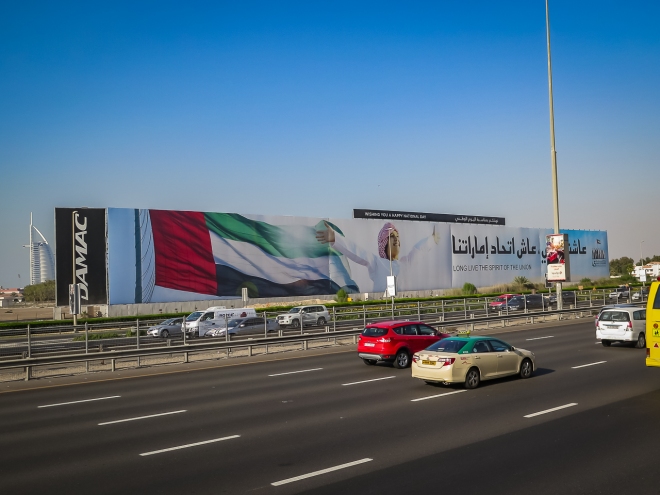 This was all a prelude to my next stop, the Dubai Mall (biggest in Dubai). Towering above it; and everything else, the tallest building in the world; Burj Khalifa. It is massive, and that first glimpse from the bus was pretty amazing.

My first stop was the mall, I need some food and more importantly something to drink, guzzling water all day was starting to get a bit dull. The mall is huge, full of shops I will never venture in to, and a number I would not be allowed past security as I do not look wealthy enough. It even has a full size aquarium inside. 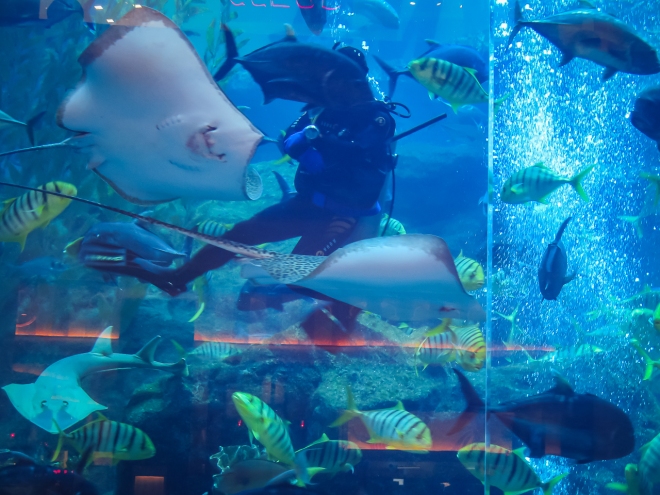 The food hall alone was almost the size of a floor of my local Westfield mall. I wandered around looking for something interesting to eat. I wanted to eat middle eastern, but discovered they had Burger Fuel; I am sure they are a New Zealand chain, and my son spent a couple of years working on the fit-out of Burger Fuels around Auckland. I had to go and try one. Burger, fries and shake. Perfect. The view from my seat was of the ice skating rink, all malls in the desert should have one….

Sated from my late lunch I went in search of the entrance to the world’s tallest building. It was surprisingly difficult to find from the outside. Though looking was interesting enough. 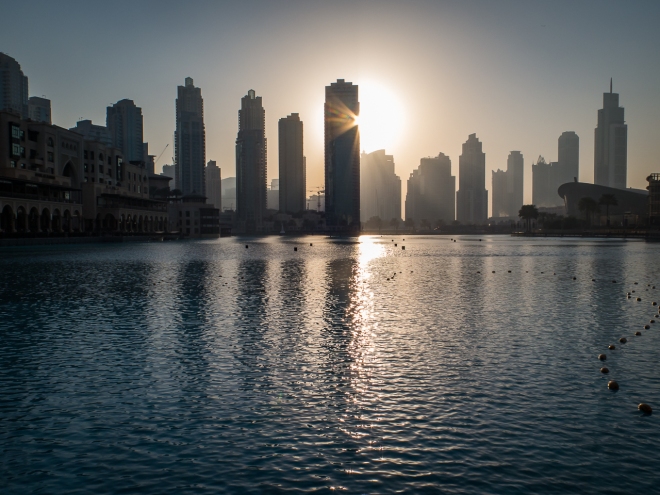 I eventually headed back inside the mall and found the entrance in there. I won’t say how much it cost me to enter, but it was by far the most expensive tourist thing I have ever done. And I mean ever. It was worth it though. 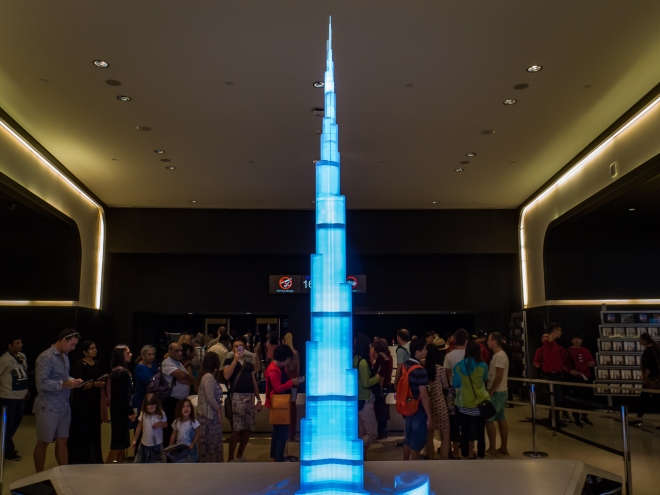 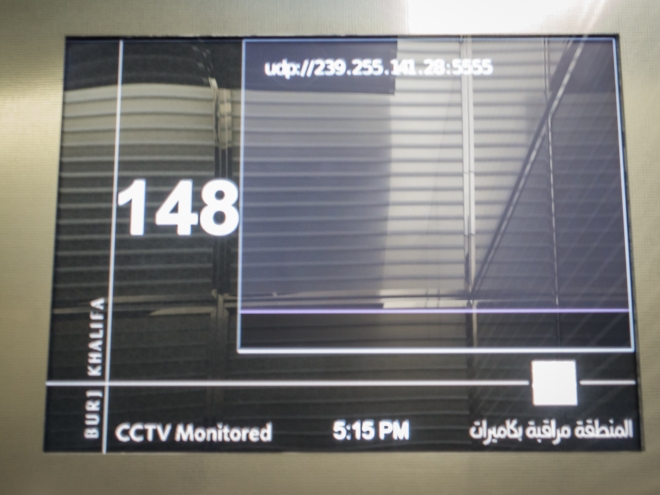 The view was amazing, everything was utterly dwarfed, the buildings that seemed so tall from ground level were barely ant sized from up here. It so high that perspective was completely out of whack.

I was up there just on sun-set, hoping for something spectacular, but it was all rather disappointing in the end.

The towers on the right hand side of the next photo are the same as the ones in the one below it. I spent quite a time up the tower, just walking round looking out of the windows, though as the sun-set came on it started to get rather crowded so I got back in the lift and headed back down to the mall, out the other side and back on to my bus. I still had 6 hours to kill. 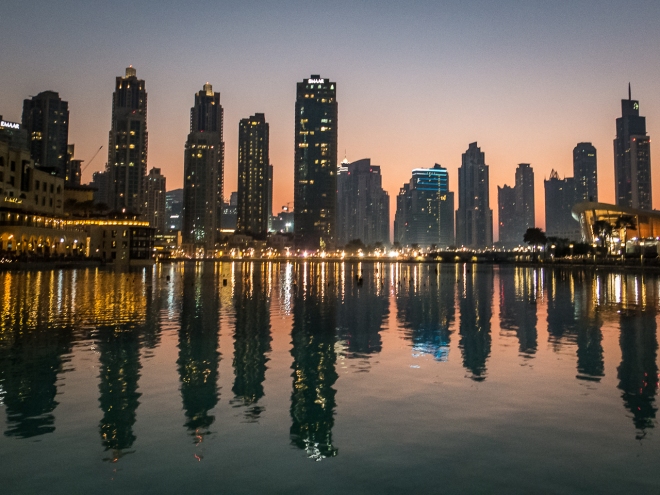 Luckily it was rush hour in Dubai, which mean a really looooooooooong journey to the next destination. We drove slowly around the Burj Khalifa and I managed to get a few hand held night shots taken. 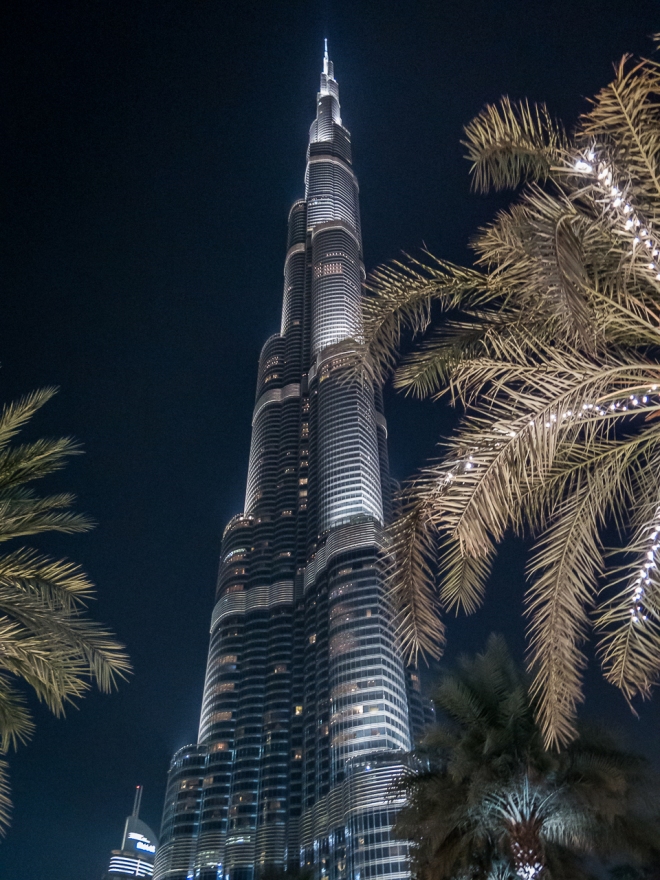 We then went on a slow tour of Dubai’s traffic jams for a couple of hours. 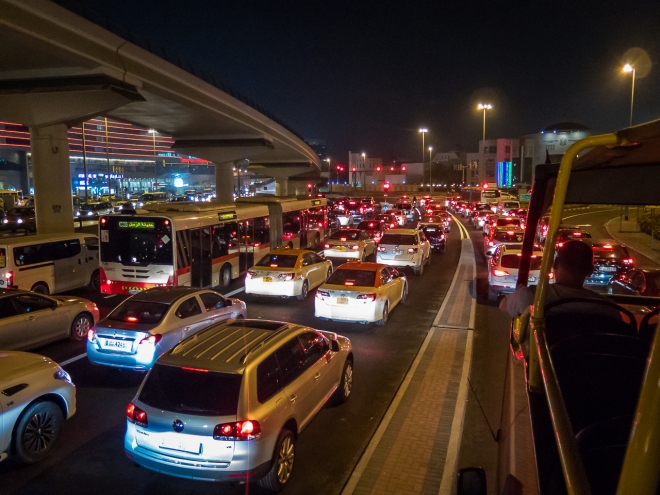 By the time I got back to where I started my day I was thoroughly bored and sick of the constant traffic fumes. I decided to get off and see if I could find a bar in one of the big hotels, (thanks Google). I stopped in for a well deserved, but ludicrously expensive, pint in a pretty horrible hotel bar. I didn’t stay long.

I took the metro back to my hotel, where I managed to get a shower and a complete change of clothes in the hotel gym changing rooms. What a relief that was, I felt pretty gross after a day in the heat and then the humid smog of the evening tour bus ride.

I made final use of the metro day pass and took the train to the airport. I was three hours early, so managed to get a snack and a couple of glasses of wine before boarding and the seven and a half boring hours back to London. It was not a bad flight, I had three seats to myself so managed to sprawl for most of the journey.

It was 33 degrees in Dubai, 2 in London when I landed just before 8 am. Welcome home!!