I went out with the camera again today. That’s twice in two days, which is not something I’ve done in a very long time, and I enjoyed it very much. It’s good preparation for the holiday we are taking in three weeks where I imagine/hope I will be taking lots of photos. Eleanor and I have two weeks off work and will spend seven of those nights in Europe, taking in Ghent and Amsterdam, and celebrating my 60th birthday in Brussels in the middle. As someone who was, and remains, staunchly anti-Brexit, there was not a small amount of ‘fuck you’ when I decided I’d celebrate an important milestone in Brussels, the administrative heart of the dreaded European Union.

I haven’t done a photo walk with Steve for quite some time, nor have we caught up in the six months since I got back from New Zealand. The brutalist Alexandra Rd Estate is convenient for both of us and looked like a great spot for some photography, so we agreed to meet at nearby South Hampstead Station and wander about taking some photos and chatting on what has gone in over the last year.

Unfortunately when we arrived at Alexandra Estate we came across signs warning that photography was not allowed. 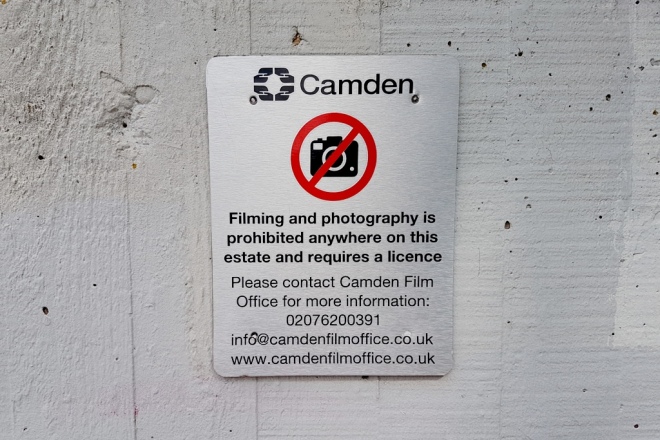 As this is a residential community we agreed to respect the wishes of the people that live there and just walk through. I did take one photo from the footpath as we left. A bit of a shame, it’s a very cool looking place; but they are people’s homes and not movie sets and it was important that we comply with their very reasonable request. It does look to be an amazing place. 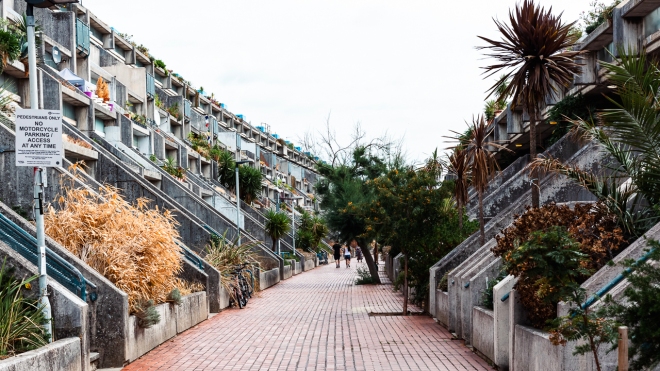 Steve suggested we walk to Trellick Tower, another brutalist icon, about 30 minutes away. I readily agreed, I don’t know this part of London, so an opportunity to walk around was also welcome, with the bonus of a piece of classic brutalist architecture thrown in for good measure.

Construction commenced on the grade 2 listed Trellick Tower in 1968 and was completed in 1972, it had been commissioned by the Greater London Council and designed in the Brutalist style by architect Ernő Goldfinger. The tower was planned to replace outdated social accommodation, and designed as a follow up to Goldfinger’s earlier Balfron Tower in East London (a photo walk for another day). The building celebrated its 50 years recently and there were lots of signs talking about it. It’s still predominately social housing, though there are a number of privately owned flats, which are eagerly sought after as you would imagine. It is quite a unique building with an interesting and occasionally troubled history. 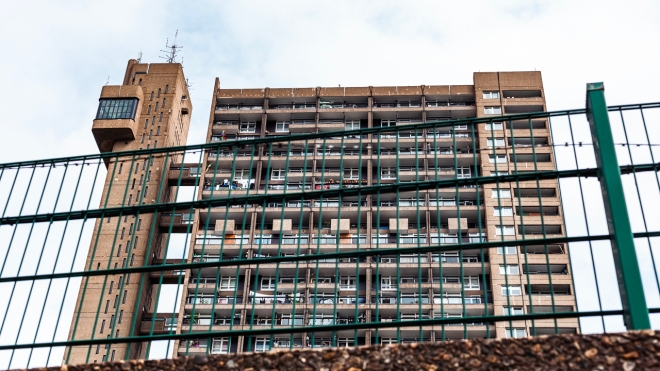 Trellick Tower was the inspiration for J G Ballard’s disturbing dystopian novel ‘High Rise’, and has frequently be seen in film and music video. 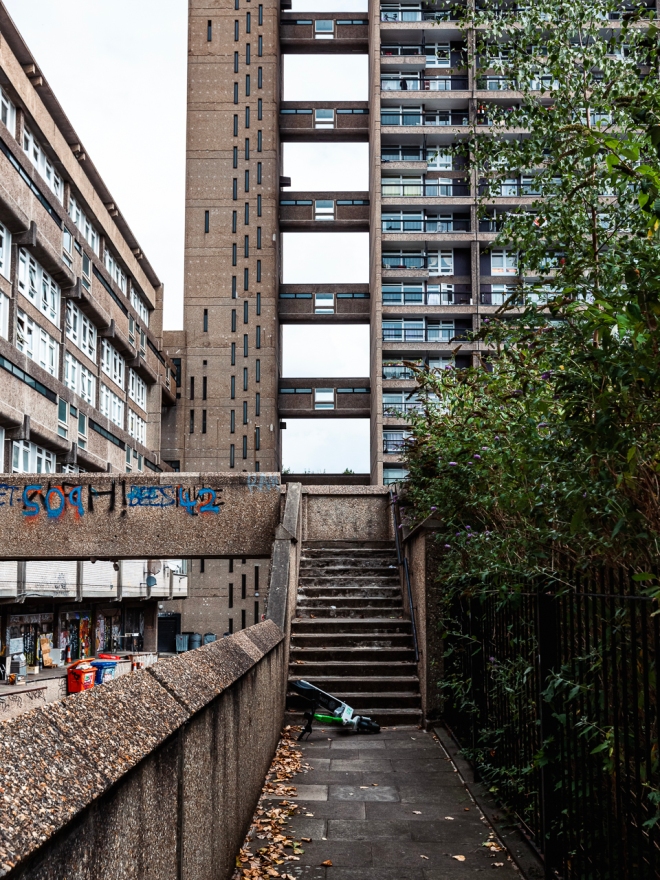 There are plans to build new towers nearby which threaten the area, including the large graffiti wall. I know there is a need for more housing in London, but potentially ruining what is a historically important building and area is not the way to go about it, and it’s not as if what gets built will complement what is there already. 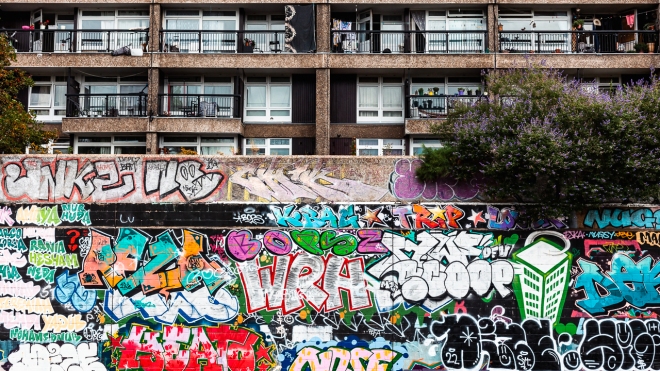 I was quite taken with the graffiti all around the base of the building, some of it is new and commemorates the buildings 50 years, but equally a lot feels quite old. It is part of the building and community’s fabric, something that some outsiders are not always willing to accept. I know it’s not to everyone’s taste but tags and graffiti are part of urban living, particularly in long established inner-city working class areas. Yes, graffiti is not appropriate in the beautifully preserved Georgian and Edwardian parts of the city, and it’s not something you see there much either, but it has its place. Here was one of those places.

Though the gate on the steps down into the grassed area and onto the basketball court, both surrounded by graffitied walls was open, we didn’t stay there long, nor stray too far from the steps. It’s private property after all, though there were no signs saying we couldn’t be there. 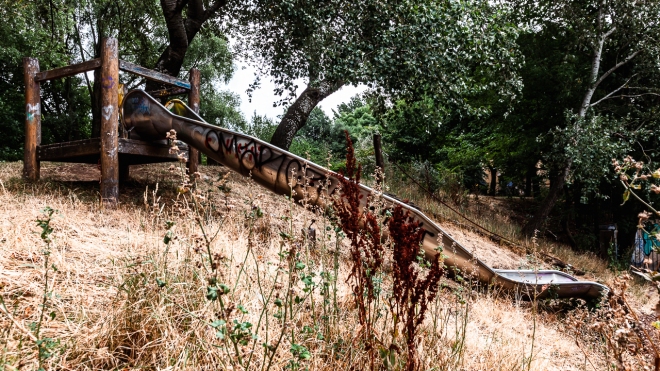 We walked around the outside of the building and I took a few photos from different angles. Perhaps if we were with photographers more experienced in working in private/public spaces I would’ve been more inclined to explore further. I just don’t know the protocols, so am cautious in my approach to these sorts of the places. The separate access tower with the walkways across is so visually appealing. It’s such a shame that more residential buildings are not built with such an aesthetic view, particularly those that are built for social housing; possibly even more important for social housing.

After Trellick we walked along the Grand Union Canal to Paddington Station where we stopped for a refreshing ale before going our separate ways, me; I went back home. I’m quite keen to explore the area around the Westway at some stage as well. The Westway is the raised section of the A4 motorway exiting London to the west, made famous by bands like the Clash and the Ruts. 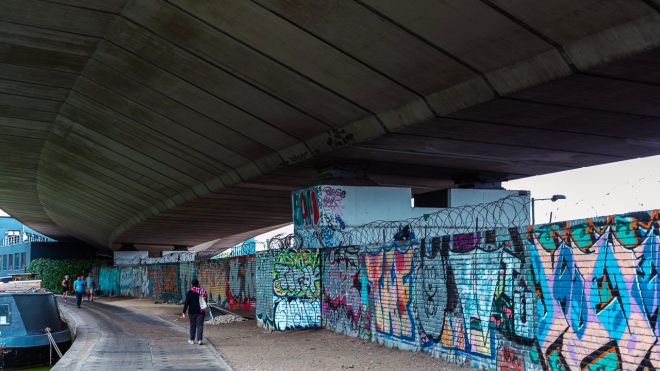 I guess this boat met its Nemesis in the Grand Union.

It was another good day out, I should do more of this!