Karangahake Gorge is close to the top of my ‘Favourite places to visit near Auckland’ list. It has everything I want in a destination; lovely bush, an interesting history and the ruins to support that history, a good walk and a great river. Its main downside is it’s also on lots of other ‘Favourite places to visit near Auckland’ lists. It is hugely popular. We drove though the gorge on the way from Auckland to Whangamata, where we’ve been staying with friends for the past four nights. I had planned to stop but it was very busy as we passed through so we decided to stop on the way home instead; aiming to arrive earlier in the day to avoid the worst of the heat as the walking path is very exposed to the sun.

We managed to make the gorge as we drove home, but again far too late in the day for the full walk, it was another hot and busy day. Tottenham (Eleanor’s football team) were on the telly first thing in the morning so we had to stay and watch the match before we left.

As it was so late in the morning, and we had missed the early walking opportunity, we stopped for brunch and a quick look around Waihi as it was on the way. Waihi is a gold-mining town close to the eastern end of the gorge and, like the gorge, is interesting from a New Zealand perspective.

The Cornish Pumphouse was built on the edge of Waihi around 1904 to service the nearby Waihi Mine, New Zealand’s most profitable gold mine. It was modelled on the pump houses used in Cornwall in England to pump water from tin mines. I love this building, it stands on a small rise right on the edge of the town and can be seen for miles. 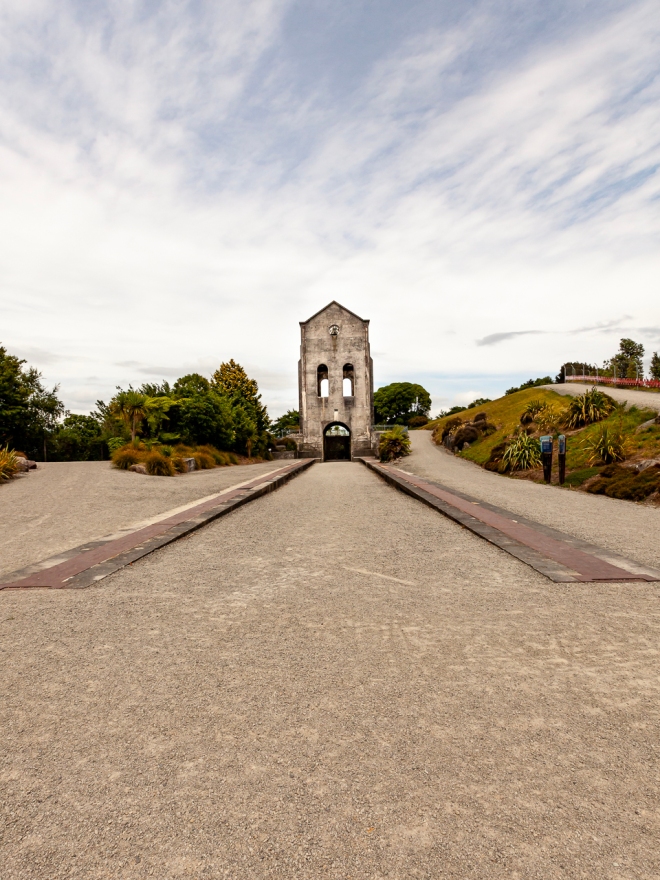 The open-cast Waihi Mine is no longer working and you can see a landslip on one side of the mine. If there was time I think a tour of the place would be really interesting. Another ‘next time’ activity.

The Karangahake Gorge was formed by the lovely Ohinemuri River which runs through the gorge. The gorge’s history is heavily linked with gold mining, though not in the same way as Waihi with its huge open-cast mine. Here, tunnels were dug into the hillside and the mined rock was dumped into the river. Pump houses pushed the water and rocks through large batteries which crushed the rock exposing the ore. The remains of that old industry lie all along the river side and I’d like to come back one winter, when it’s cooler and less busy, and photograph them again. At its peak, around the start of the 1900s, gold from the gorge made up 60% of the gold found in New Zealand. Prospecting still goes on in the area, but not to the same degree and it is all hidden away.

My favourite bit! I’m a huge fan of trees growing in and around ruined man-made structures, and I never tire of finding them.

We crossed the swing bridge over the Waitawheta River, a tributary of the Ohinemuri River just so I could take the above photos. From memory there is a good walk up the tributary that is less busy than the main path, though we didn’t really have time to do either today. 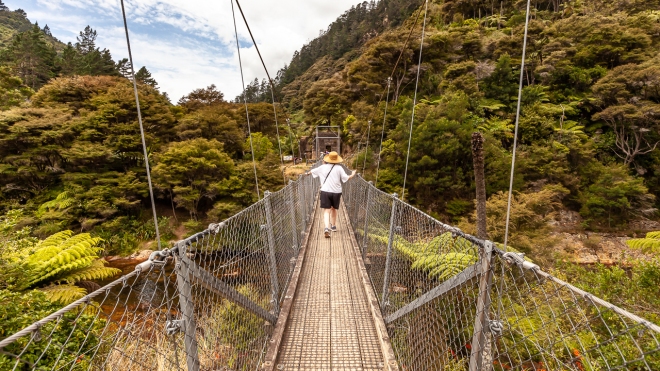 We dropped down to  the edge of the Ohinemuri River for a quick look before walking back to the car and continuing on the with journey home. I think Eleanor was pointing to my finger being over part of the lens… 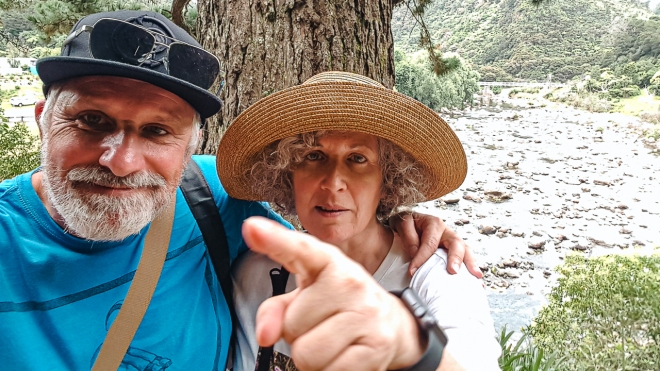 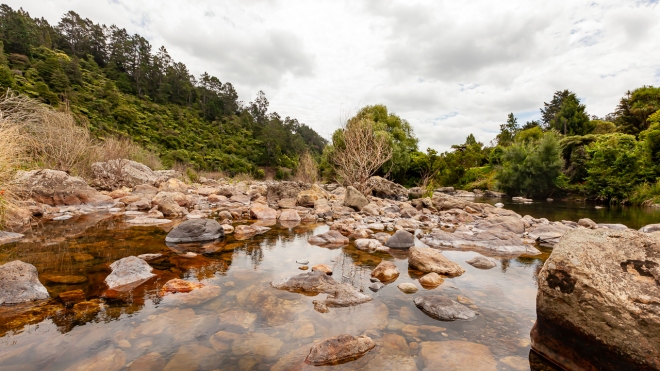 We made a final, brief stop in the town of Paeroa for the obligatory photo by the giant Lemon and Paeroa (L&P) bottle, the town’s main tourist attraction since 1968. L&P is a soft drink that used to just be lemon and carbonated spring water from the town, but it’s been owned by Coca Cola for years and probably has loads more ingredients than is necessary.  L&P isn’t sold or well known globally, but it is ‘World famous in New Zealand’.

Eleanor seems thrilled to have her photo taken near a New Zealand icon.

And that was it, the end of four great nights away, our first holiday in ages.