Yesterday morning Mum caught the train into the city to come and see me, and we met for an enjoyable coffee and a walk around Wynyard Quarter and Victoria Park before one of the many brief showers that have plagued this week finally caught up with us. While we were together I asked to borrow her car for a few hours over the weekend; an offer that she’d previously made to us.

Eleanor is under physio orders to not walk too far for a couple of weeks so her knee pain can be resolved. Borrowing the car so we could do something more than walk the block was her idea and I’m profoundly grateful to her for having it. I’ve been in a slump this week and getting out of our immediate surroundings was the right thing to do. I must admit to having thought of asking to use the car, but rejected it as I really wasn’t in the mood for driving as I often find driving in New Zealand stressful. I’m not the road warrior I used to be, or thought I was. Anyway, it was a great idea, and we had a nice, albeit brief, time at Muriwai before the rain arrived and we made our way home again. 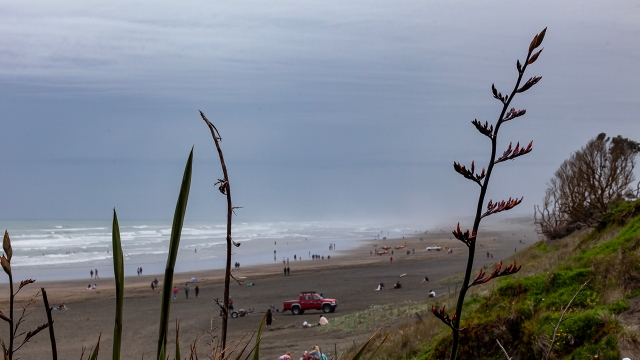 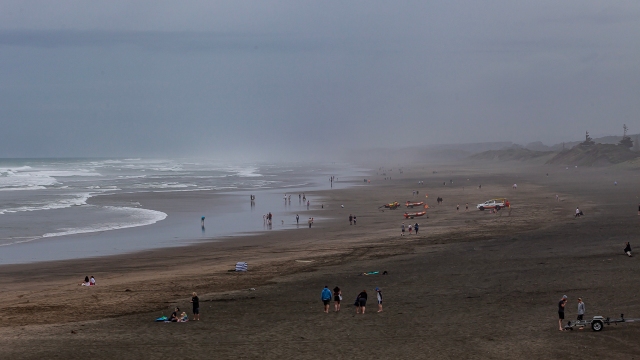 Eleanor and I caught the bus out to Henderson and met Mum in a park near her home. We had coffee and a chat (Covid) before getting the keys to the mighty Hyundai Getz, a small getabout car that was perfect for Mum and our needs, and my driving reluctance.

Muriwai Beach is normally a thirtyish minute drive from Henderson. The traffic was really heavy today, and there was a long tailback going into Kumeu. It felt like normal, unlocked down traffic to me, and both in Kumeu and at Muriwai there were a lot of unmasked walkers. More than in the city centre at least, the west was always a bit wild. I don’t blame people as I’m sick of mask wearing too and my compliance in some situations is waning.

We arrived at the beach just on midday and went straight to the café to order a portion of fish and chips for lunch. We have been thinking (drooling at times) about chips for quite some time, but sadly these weren’t as good as we would’ve liked for our first non-MIQ chips, oh well. I am sure there will be other opportunities. It was nice being able to enjoy fish and chips outside, near a beach and in the sun; the perfect place to eat them.

After stuffing our (mine in particular) faces with chips we did the short loop walk from the beach up to the cliff top viewing platforms that look out over the sea and it’s renown gannet colony.

Just below the first of the viewing platforms, on the Muriwai Beach side is where we scattered most of Dad in 2007. I always stop and take a moment or two to reflect on what a good man my dad was and that I still miss him. This year I hope to be able to visit on the anniversary of his passing.

I took a couple of photos from the viewing areas, though I am not particularly pleased with the output; the images are all a bit ‘soft’. I think I was shooting at too slow a speed for my ability to hold the camera still. I was also using a polarising filter which I now regret, though I think the case for the filter is in London, which isn’t much use to me here in New Zealand. 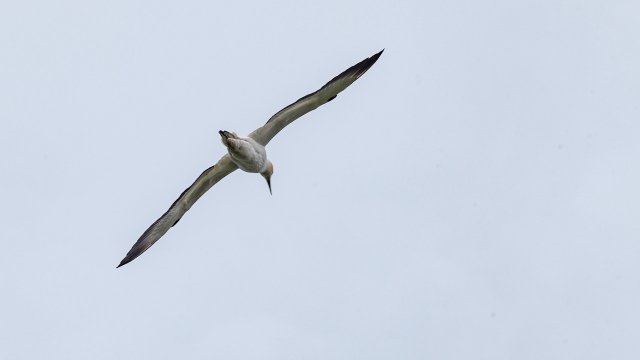 I love the viewing platforms and they were quite popular today with both humans and gannets. There are about 1200 pairs of gannets that mate and nest on those small vertically sided islands and this narrow stretch of cliff, attracting a significantly higher number of human visitors each season who come to see them. 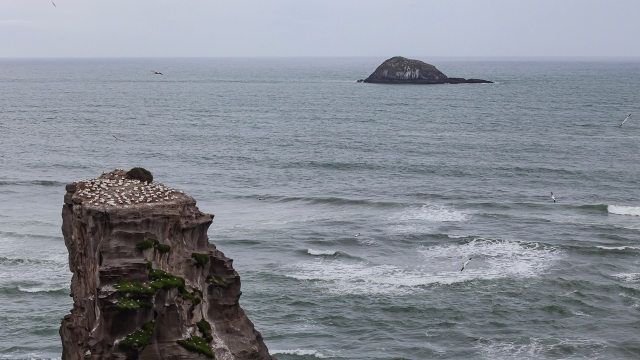 There were some people making a huge mandala in the sand at Maori Bay which was looking pretty good, though very unfinished as we walked back down towards the car as light rain started to fall.

I drove us along the short and mostly unsealed road to North Muriwai, where I used to run and ride in the pine forest before I went on my travels. I was interested in seeing what it was like now, and very busy was the answer, so we didn’t stop. On the way back to the main road I was passed by some yelling knuckle-dragging youth in two of these ridiculously large utes (utility trucks) that seem to be everywhere in NZ. I said bad words, loudly.

It was good getting out of the city and I very much appreciated having the use of Mum’s car. A number of people have offered us the use of a vehicle, which has been lovely and very welcome. Once we were home and I’d successfully negotiated how the car lift to the car park in the block worked I was feeling so much better about the world, so thanks Mum and Eleanor, xx.

Sunday update – The car was making very strange sounds when I started it to go out for a Sunday drive. I ended up taking it back to Mum in case it was something serious. She told me later in the day that it always sounds like that when the engine is cold. In lieu of a drive and a short walk somewhere different Eleanor and I had a glass of wine on the deck instead. That was enjoyable and probably less stress inducing than driving again in Auckland’s traffic.