Tapping Lido on the shoulder, I raised my fist in the air, signalling to those behind to stop and be silent. We drop to a crouch, eyes searching all around. What instinct made me do this? There is no sound, no unfamiliar noise, nothing to signal apparent and immediate danger. I am the clan tracker and the silence is what worries me; the complete absence of sound. We are in dense undergrowth, deep in a massive forest and not far from a large river, yet there is no bird call. Nothing. I count down 60 seconds in my head. I signal and we rise as one and carefully resume our journey along this narrow, deeply overgrown path, Lido is slashing our way through the tangle of vine and bramble as quietly as possible. Our hunt for food is too critical, we can’t return with nothing.

I hear a bird call, I raise my fist again and we stop, silent once more. The call is repeated, this time it is closely followed by a response. My experienced ears tell me these are not natural and confirm my previous instinct, we are being tracked. The time for slow careful progress is over, those behind me draw bows and, unsheathing my own machete, I move forward to join Lido and we both start to hack our way forward. There’s a ruin ahead, not far I think, if we can make it we will be better able to fight off any challenges with the stone at our backs. We may get to see the day out.

We are way out of our tribal zone of Walthamstow, I pray those following are from Camden where we have occasional and friendly trade, yet fear they are Pimlicans, bitter enemies. Since the great levelling in the 2030s when the Thames flooded and the city reverted to primal swamp and dense jungle, the tribal zones have been at war, fighting for food and drinkable water in this miserable poisonous swamp.

We hear more calling from behind and to one side; they must know we’re heading for the relative safety of the ruin and are trying to get ahead of us. We slash faster, those with bows have them raised with arrows loaded and strings tightened. The top of the collapsed dome of St Paul’s Cathedral appears through the forest, not far. A few more minutes and we will have a fighting chance….

This is future London. Welcome.

We have been doing quite a bit of packing and tidying over the past couple of days, so after discovering my big camera was actually still working I thought I would take it for a walk around the finance part of the City, then visit one of my favourite hidden spots; the ruins of St Dunstans-in-the-East. Modern architecture of London’s scale doesn’t exist in Auckland, and neither do old and ruined churches.

Today is the final of Euro 2020, postponed from last year due to the pandemic. The final of this European wide football tournament is here in London, at Wembley Stadium, tonight. England are playing Italy, but it’s a pandemic so surely there won’t be loads of pissed-up England fans in the City at 10:30am, 9 half hours before kick-off?

Wrong. They were already standing on the tables at the pub outside Liverpool St Station flailing their plastic pint glasses in the air. The cry of ‘INGER……LAND’ being spat out of frothy lipped red faces. Mask on, I hurried past.

I crossed the road, away from the station and the building crowd, and dived down one of the many side streets and into the financial district. It’s Sunday, it should be quieter here. Other than the short walk to St Dunstans, I had no plan and just let the flow of the buildings guide me, avoiding people where possible, stopping to take photos where appropriate.  I took a few.

The City has changed in the few short years since I was regularly walking past, a number of the towers that were being built have been completed. I guess it has been easier to block roads or to get permission to make noise over extended hours when they are less people around to raise a complaint. 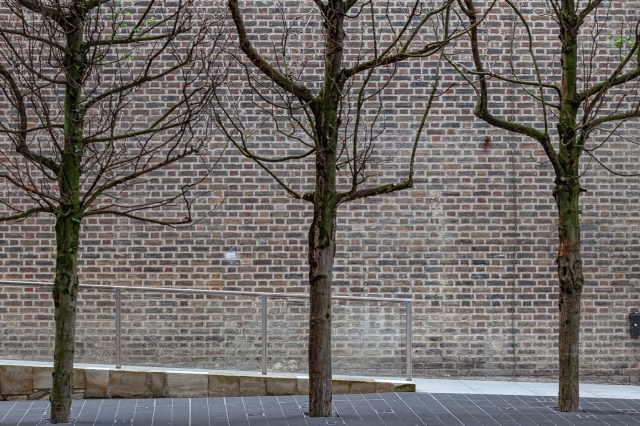 I liked these chairs and table, particularly that three were tucked in and one was left out; a lone smoker or bored security guard taking a rest?  There were plenty of them about on this Sunday morning. 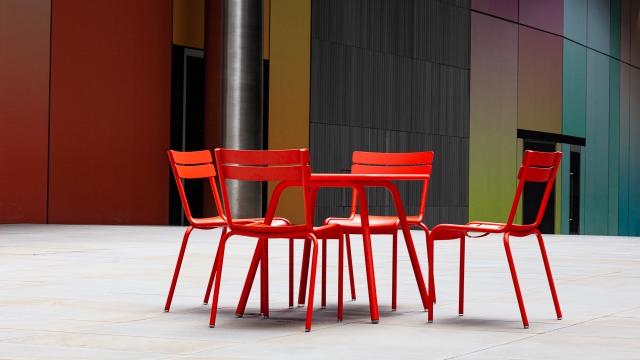 I did a fair bit of looking up on my walk, always intrigued by the compressed view as the towers lean in on each other, distorted by the wide-angle lens. 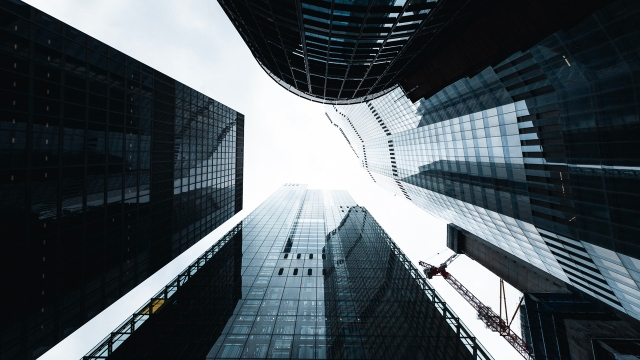 I took a lot more photos looking up than I did looking along. Today, ground level was less interesting. 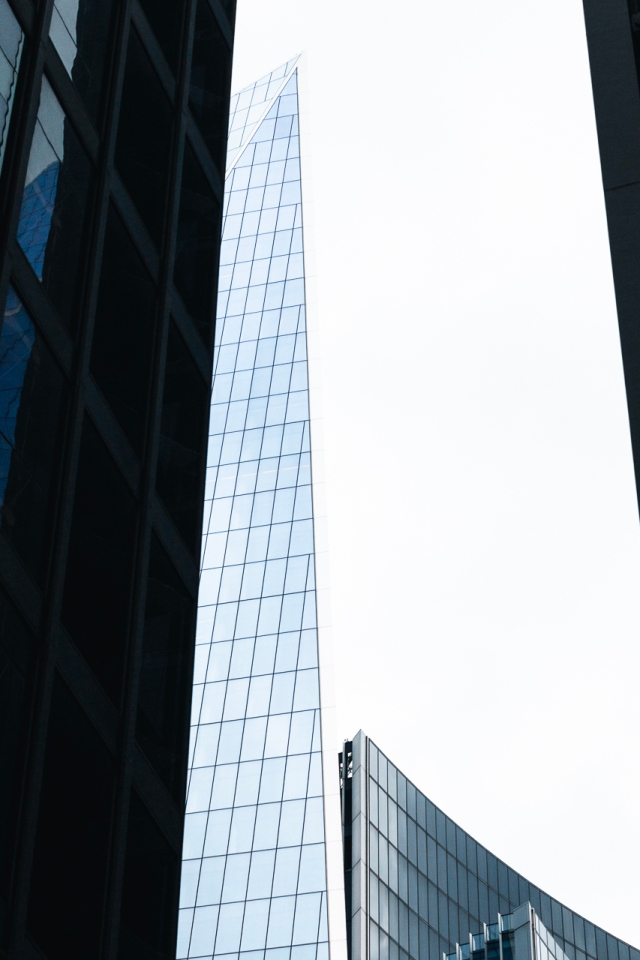 I was trying to find some good examples of age contrast in the buildings and this was the best I could find that didn’t have people blocking the view. St Olave’s Church tower from 1450, through some post war low rise blocks to the least loved building in London, 20 Fenchurch St; ‘The Walkie Talkie’ completed in 2014, built 564 years after the church. I won’t see this in Auckland and I will miss it. I must try and make use of the architecture that is there though, less moaning, more pro-activiity.

After wandering randomly through a collection of small streets and narrow alleys, I found my destination –  the ruins of St Dunstans-in-the-East. Its overgrown and moss stained walls the inspiration for that short piece of fiction above.

I came here in January 2018 (it seems like yesterday) and very much wanted to get back before we leave for New Zealand in 18 days. I was hoping I would have it to myself. That was a rather desperate hope and wasn’t to be, though it was quiet enough for me to take photos without anyone sticking themselves in them. 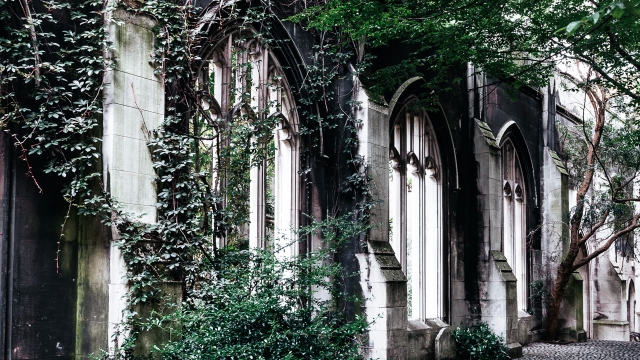 Its not a big site, but is fantastic and I love it,  a little oasis of peace, at least at the weekend. It’s a lot more overgrown that it was when I was here in winter; it had the feel I was after and I am reasonably pleased with the photos I managed to get in the short time I was there. 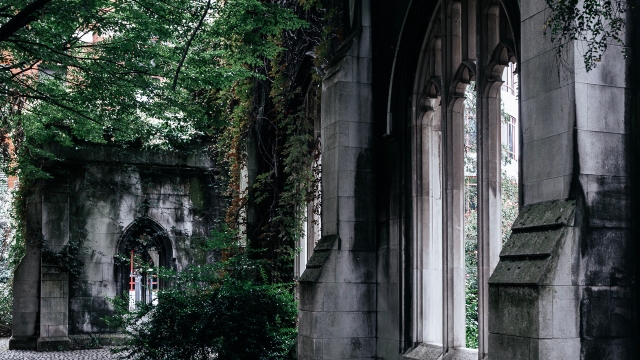 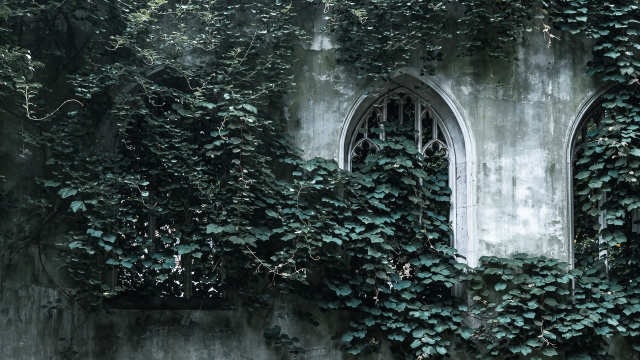 Leaving St Dunstans, I walked down towards the Thames and upon arriving found a lot of people wandering about, heading towards the various bars for the game. It was a lot busier than I wanted it to be so I moved back up into the quieter streets of the city to take a few more images before heading back to the station. Some final (or almost final, who knows I may get out again!) images before we leave. There is something quite special about the City of London on a Sunday. 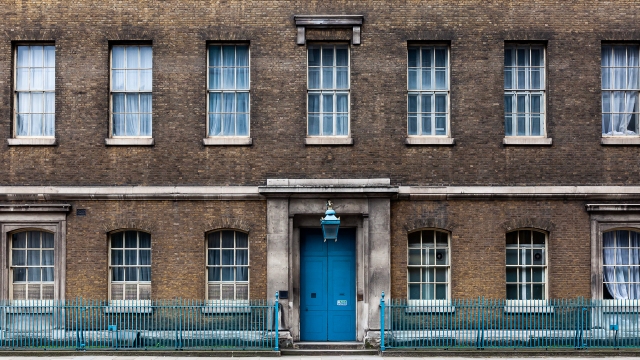 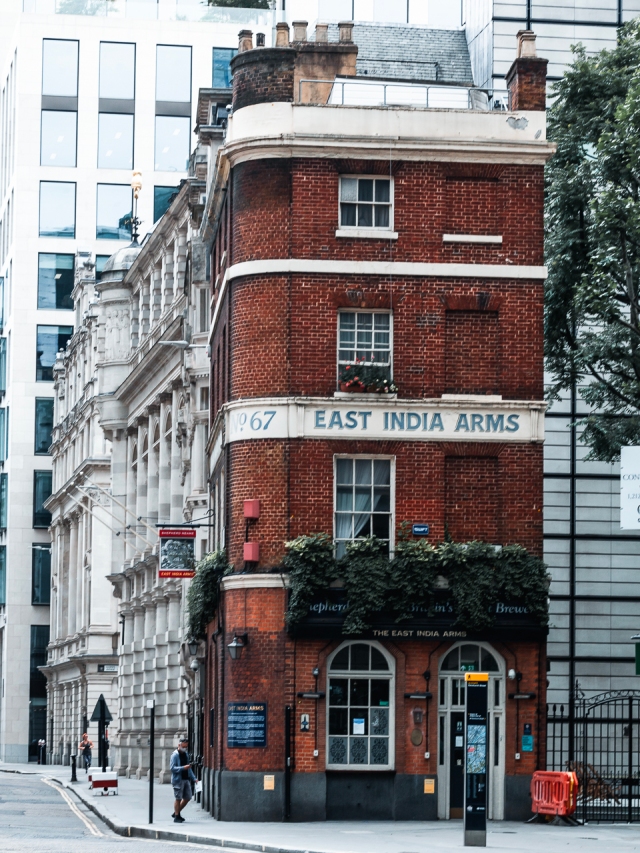 The station was rammed, loads of drunk idiots singing and shouting, a train load arrived from Essex as I was walking through. I hurried off onto a quiet platform away from them, mask firmly on. I want to stay clear of potential Covid spreaders. 18 days of Covidiot avoidance to go. I took a home test a couple of days later just in case. Negative, thankfully.

Apart from the really drunk football ‘fans’, that was fun. I am so pleased my camera isn’t dead (this time). Much as it is heavy and the lenses are scratched and the sensor needs cleaning, I love its bulk and feel, the way it works and the quality of the images I can get.

The day before, Saturday, Eleanor and I went for a walk around Walthamstow, up to a strangely almost deserted Hollow Pond. On the way we discovered Phlegm painting a piece on a wall in St Peters-in-the-Forest churchyard as part of the E17 Art Trail. I was very happy with that, a final Phlegm before we go. 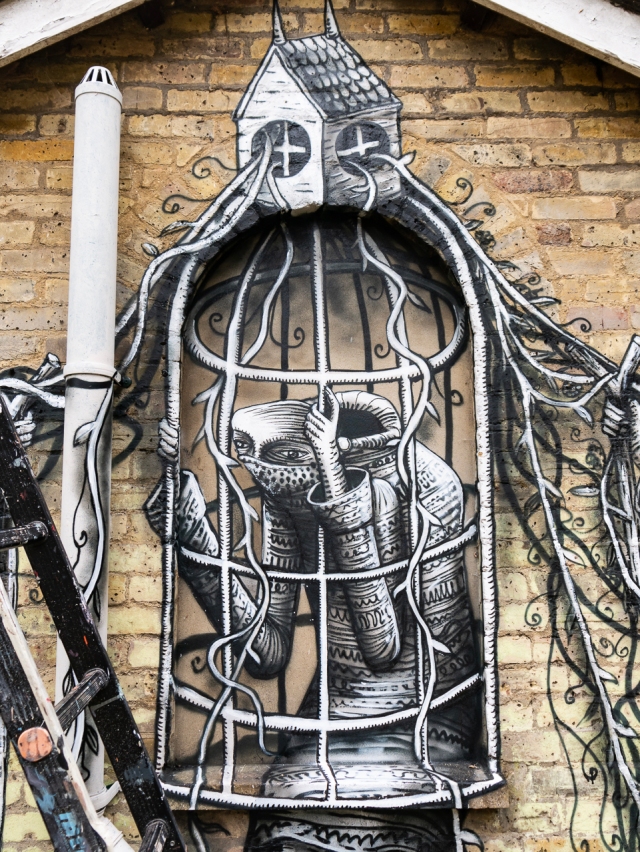 I also took a photo of this small warehouse converted into a house, just because.

I am going to write another short story soon, and hopefully the two weeks in isolation will give me the time and space to do it.  Lido and future London will definitely be in it.