Time for a great leap forward in, err, time. The previous post was set at the start of June and here we are now, entering the last week of August. Photographically, it has been a fairly uneventful period; we have not been up to much in the preceding three months, so there was nothing really to write about. Though it has not been completely quiet, we have been to the flat a number of times. I have slowly been filling the space with, mainly second hand, furniture. In the one and only prior post about the flat I commented that I was going for a 60/70s vibe and I have very much stuck to that. The antique/vintage shops in St Leonards have very much benefited from this.

The other thing that has happened was being successful in applying for another job, which I will start sometime in September. The role is with another government department, Ministry of Housing, Communities and Local Government. I am still working in technology, though for the first time in 30 years I am not working in an IT department. I will be working in a data and analysis team, though I am looking after their technology, I am looking forward to it. I have yet to agree a start date so I have two, maybe three weeks off between jobs. I am now into week two; hence the flurry of posts in the last week. I very much need this time off as I was burning out, though at least this time I read and understood the signs and took action.

I have mostly completed the things I am going to do the flat in these first few months of ownership. It is now time to visit and just enjoy it all, rather than continuously spending money and doing small jobs. I have bought all the furniture I am going to buy, the last thing was a bed for the second bedroom. My sister is visiting from New Zealand at the end of September so I thought it appropriate that I have a bed for her, much better than making her sleep on the floor!

Below are some updated images of the place.

Often the little things make all the difference, like this little rack I bought from Ikea. Simple, but it has allowed me to use the very small amount of drawer space in the kitchen much more effectively. I quite like the look of it as well.

The same with the mirror I bought for the bathroom. There was a mirrorless cabinet here which I moved as this was the only space for a mirror. Simple things done well. The Nordic way.

Unsurprisingly the main room has had the most spent in fitting it out. I have bought dining chairs since the last post which just showed a table.  Recovered 60s Danish chairs, they were pretty close to being the most expensive thing I bought, El went halves with me on them. I have also (finally) gotten around to getting a couple of street art prints I bought framed, that poster was from the 2013 Baroque the Streets exhibition in Dulwich.

I am still to work out what to do with the weird square white plaster thing on the wall. Current thinking is to do a large portrait diptych of one or two photos. Not sure yet. I am going pick up some cheap frames this week and see. 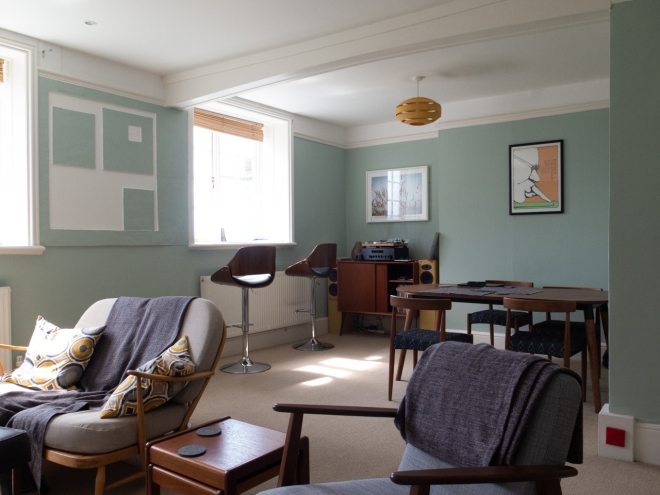 The record cabinet is 60s Danish; the amp and turntable are very new. The speakers sound amazing, though are not quite the right colour, but they were £30 from a charity shop and they are a great purchase. The red square you see in the bottom corner, and they appear elsewhere are old power-points. I have no idea why they are red, but they will be going. Which reminds me; I must ring the sparky!

The sofa is English, made not too far from home in Walthamstow, again from the 1960s. It is great to have space to put some of the absolute loads of books that El and I have, as well as finding a use for the space under the extensive hearth area. 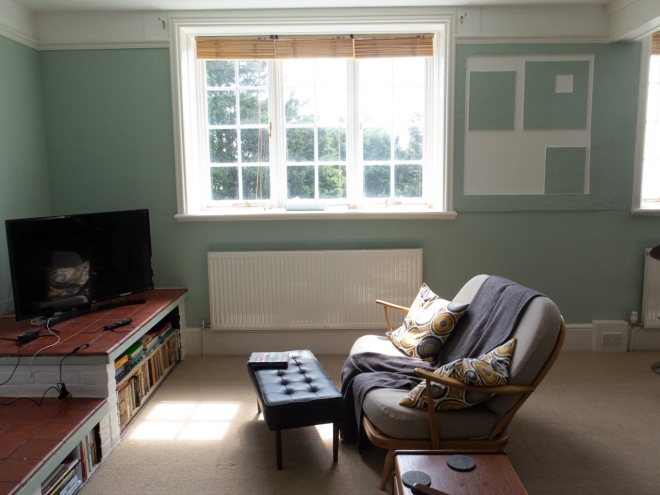 Since the last post the main bedroom has been painted, mostly a dark grey, with one light grey wall. The room is really big so the dark walls and roof reduce some of the space. Having sloping walls means it is hard to fill the empty space with furniture and it is impossible to hang pictures on the walls. It is also gets a lot of sun, so the original pale walls were far too reflective. The dark works, though the painter was very unsure !

I have also gone for a mustard and grey colour scheme, which is quite ‘on trend’, this will flow further through the house as I decorate, though you can see that in the soft furnishings I have bought.

The flat has a ton of storage, so this sideboard I bought to act as a dresser is semi-redundant, but I really like the look of it and needed something in the bedroom to fill space, as well as store more books. 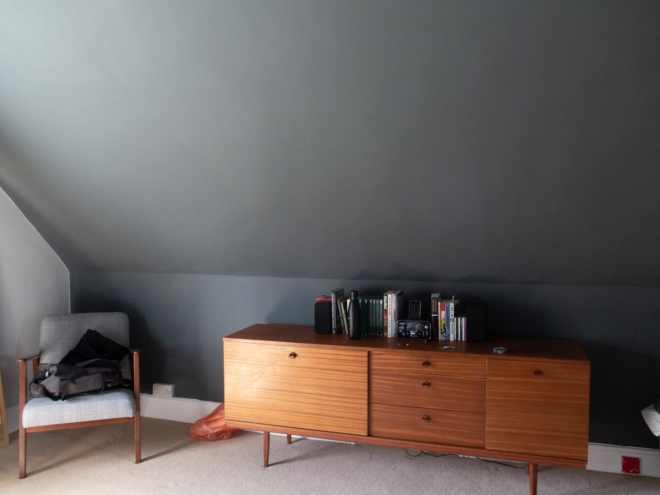 The final room I will work on will be the second bedroom. But it does have a bed, so no floor sleeping for my sister, or any future guests.

That is it for now. As I said at the start, I doubt I will do much more to the place till winter, when I may start to decorate. In the meantime I have more prints to hang on walls, and a whole load of records to take when I go back down in the next few days.

2 thoughts on “Progress report on the flat.”