This is my fourth, and Eleanor’s third visit to Valencia, staying with friends Paula and Paul in their holiday home on the edge of Lliria, a small town at the far end of one of the Metro lines. We are all here for three nights, with not a lot planned apart from lunch on Sunday with an old work mate. My idea for this trip was to relax, drink cheap lager and wine in and round the pool, eat some food and do some planning, photo editing and writing. I also wanted to make a sneaky visit to the abandoned camp ground nearby.

In hindsight I think the trip was pretty good, but in the immediate aftermath I considered it a bit of a failure. I didn’t really achieve any planning, photo editing or do much writing. That was probably good, I needed to make some time to relax. The reason for the lack of photo editing was the cable for the portable hard drive that contains all my photos disappeared somewhere between security at Stansted Airport and the arrival hall in Valencia. To say I was pissed off would be an understatement. It did remind me that I HAVE to do a backup of that drive when I get home and have a replacement cable…

Sunday we met ex-work-mate, Fran, for lunch. Fran is Valencian, returning from London earlier this year. He has long recommended Casa Carmela for the best paella in town and was keen to introduce us to it, and we were keen to accept the offer.

It is a scorcher of a day, 30 degrees plus, with the clearest sky and not a breath of breeze to speak of. A lot of Valencians were hitting the beach, and it was a very crowded tram ride from the station to the sea front; but so nice to travel by tram rather than car or foot.

We arrived early and took the opportunity to walk along the beach front, Casa Carmela being at the far end of the beach from the tram stop. The beach was very busy, I should have bought swimming gear with me, I cannot remember the last time I was in the sea, I miss it.

The walk along the promenade is nice, too hot to be thoroughly enjoyable. Being able to stop for a very cold San Miguel at the far end was a fine reward and made walking in the heat almost bearable. Stupidly (or arrogantly) I did not put any sun screen on my face before we left and I could feel my skin tightening and burning as we walked. There was not a lot of shade till the beach bar. Lesson possibly learned.

Lunch at Casa Carmela was everything I had been led to believe. We had an extraordinary local white wine and the bbqed squid was just exceptional, I have never had squid that nice, nor expect to again, unless we come back. However, we were there for the paella, not the squid nor the wine, and we were not let down. The seafood paella was massive, unbelievably we all ate till bursting, yet there was still some left at the end. It was as good as Fran had said. 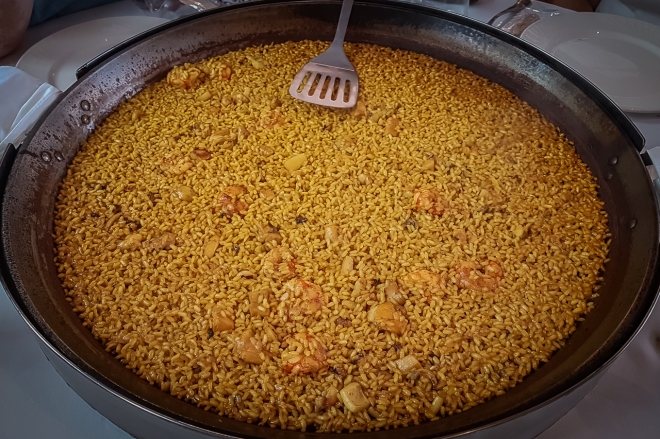 There was a tiny, tiny space left after the paella, even the dessert stomach had been used up. Fran suggested a cafe bombon to wrap up the perfect Valencian meal. Cafe Bombon originated in Valencia and is a European version of coffee found all over SE Asia, a shot of espresso mixed with sweetened condensed milk. I absolutely loved this drink on my travels in Asia and did not know existed in Europe. It was perfect and a fine end to a very enjoyable feasting experience. 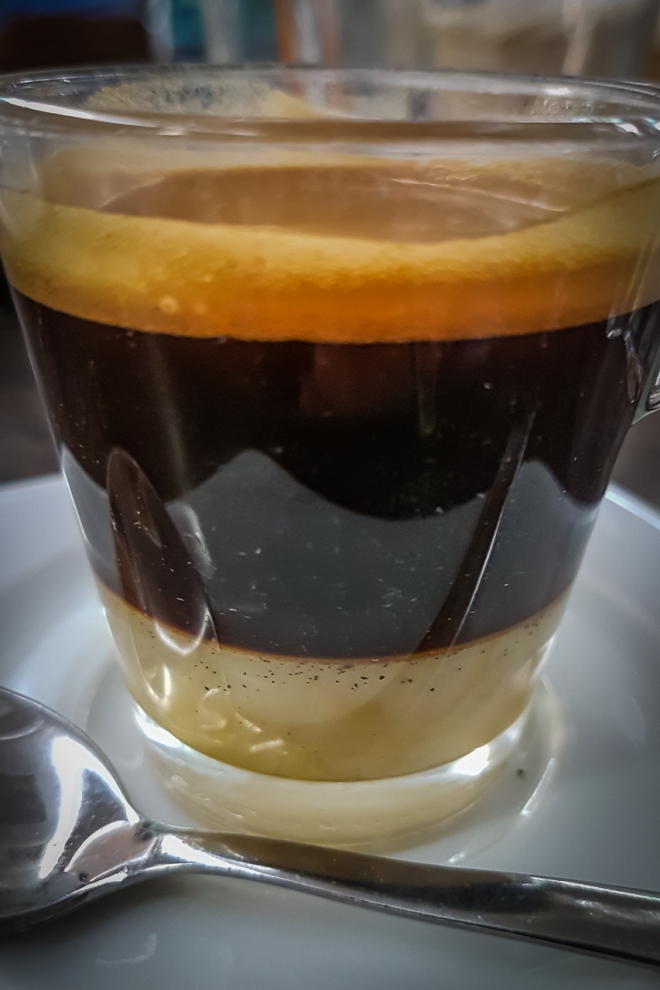 After lunch we piled into Fran’s car and he took us to a  nearby horcheta bar, horcheta is a non-alcoholic drink made from tiger nut and is a regional speciality. I have had it before and it is very nice, like a mildly sweet milk shake, and over ice was very welcome on such a hot day. The bar had the TV on and a good crowd there for the Spain v Russia world cup game, the other reason for going there. Surprisingly, and sadly Spain lost, so it was a quiet crowd that left after the game.

Late that afternoon I went on a small tour of discovery in the abandoned campground I came across last time we visited. Camping Aguas De Lliria was shut down by the council in 2009 and my next post I will explore it and the nearby fields more closely.

The following day we did not do much, lots of reading, some eating, swimming, lounging etc.

Perhaps some watching of football on the telly. The sunset was verging, on but was not quite, spectacular.

I have seen spectacular here before, and good as this sunset was, it was not up to that standard.

Tuesday was all about packing, cleaning, waiting for a delayed flight back to London and then home.

The answer was yes, that was the best paella….