A rather belated Merry Christmas and Happy New Year, and welcome to my first post of 2017.

It has been a very long time since I have been on my mountain bike, November 2015 was the last time I rode in the UK. I had a quick and awful pedal on my last trip to New Zealand and have only ridden the commuter bike once or twice since 2015. I have been meaning to get out more, honest.

I am going to stick to my usual excuse, no point in making up another one now. I have been really busy since I returned from my trip. I was unexpectedly straight back in to work and have been working ever since. As my contract finished before I left for India I was not expecting to be working so soon on my return, but I have been back at the same place on a sort of week-by-week basis.

I have also started to look for a full time permanent job, back to working five days a week. It is time to replenish a much hammered savings account. Much as I have loved working four day weeks, I have not saved any penny in over a year and have churned through the money I saved when I was working a full five days. I have been taking job applications semi-seriously this time, I have fired off quick responses to a couple of agencies but most applications have taken considerable time to complete. Fingers crossed one of those applications will prove that all the work has been worth it.

The other reason I have not ridden is I have been lazy, very lazy…

Last weekend as I was walking home from the laundrette I saw a mud covered mountain biker waiting at the lights near the end of my street. He looked like he had had a lot fun and I was quite jealous. I decided that I would do something about it. Mid-week and out of the blue I had a message from someone I have ridden with before asking me if I wanted to take a slow pedal around the forest. Perfect timing!

Fortunately all my bike needed was some air in the tires and a bit of chain lube, a quick spin around the block yesterday morning to make it all worked and I was ready to ride.

What I wasn’t really ready for was riding in -1 degrees. It was cold when I got outside! It was however a glorious sunny day, there was no wind and once we got going I sort of warmed up a bit.

There was a lot of frost on the ground and on the roofs of the parked cars as I pedalled up to the meeting point on Beacontree Ave. I was first to arrive and with a couple of minutes to wait took the first photo of the day. Frosty grasses in a road side tub. 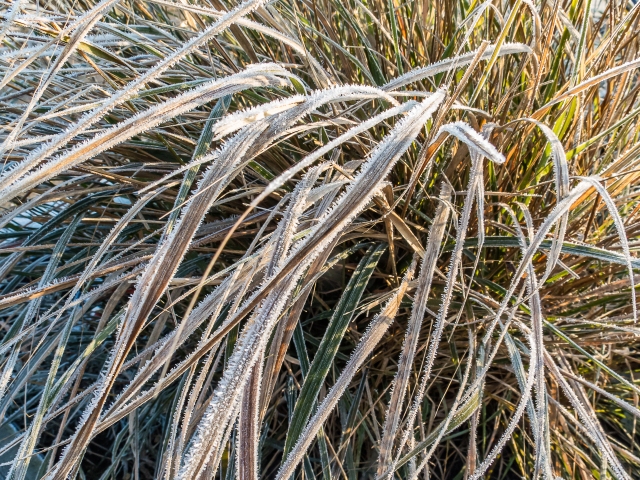 With little exercise in the last 12 months I knew it was going to be a slow and hard ride, I was lucky that my riding buddy today, Tom, was not in for a fast ride either. I told him that I would be wanting to take some photos on the way. This was not just an excuse for multiple breaks. It was stunning out there this morning! Our first stop was only a few minutes in, this could be a long ride. 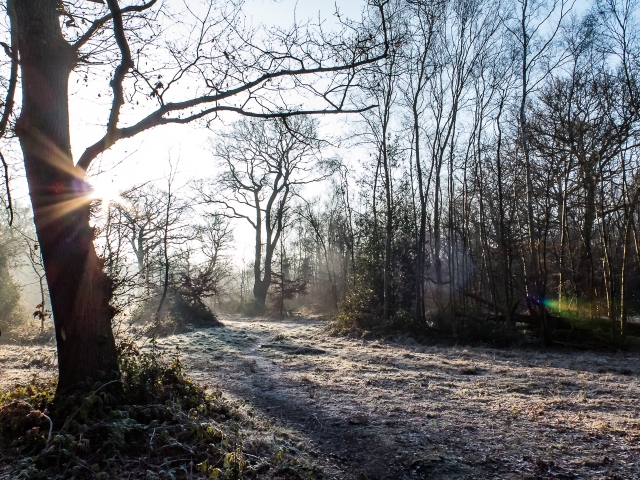 The ground was incredibly hard, I have never ridden on frozen mud before, mud that crunches under tyres or does not yield when ridden on, the puddles were mostly iced over and very few were broken under our wheels. Our next stop was at Highams Park Lake, which appeared to be completely frozen. I know shooting into the sun is a photography no-no, but meh, I have been breaking photography rules for years. Flareage! 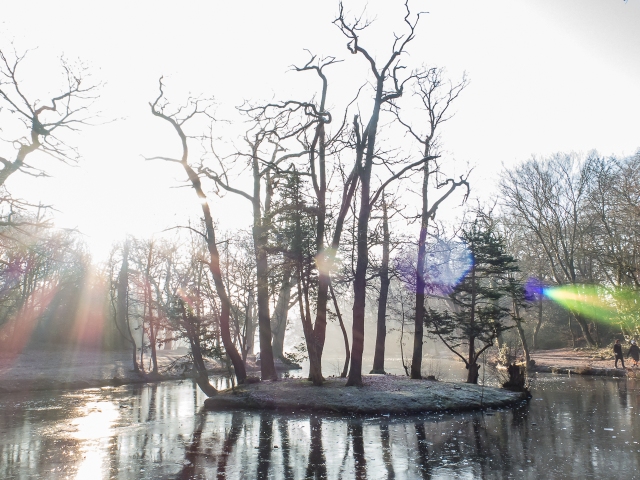 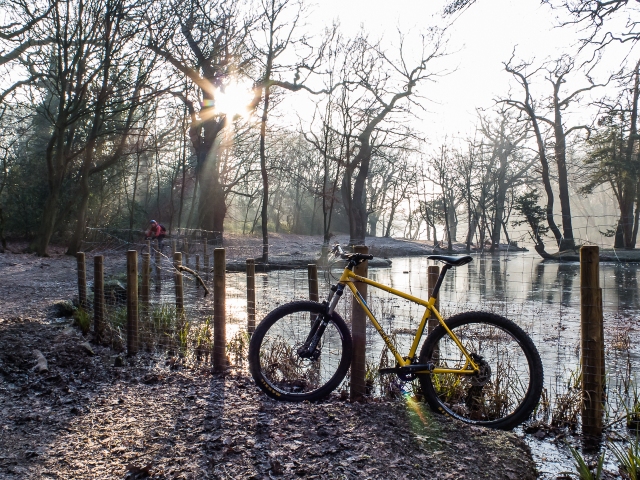 I loved these leaves trapped under the thin ice on the lake. 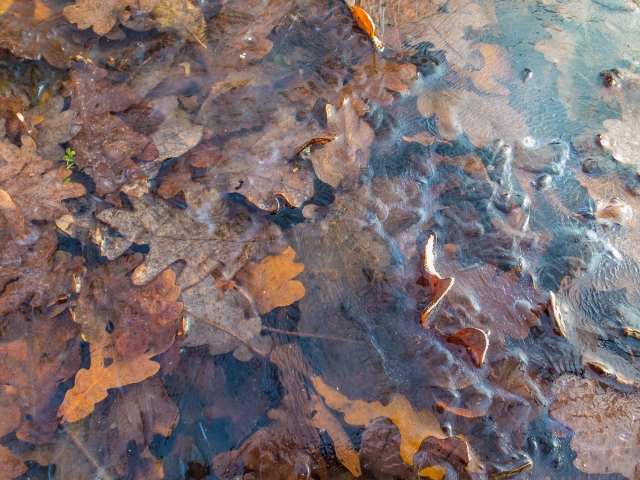 It was a bit of a slog up Pole Hill, my legs were starting to feel it and we had only been going for 30 or 40 minutes. While we rested I went for a quick explore, looking for some frost laden leaves. 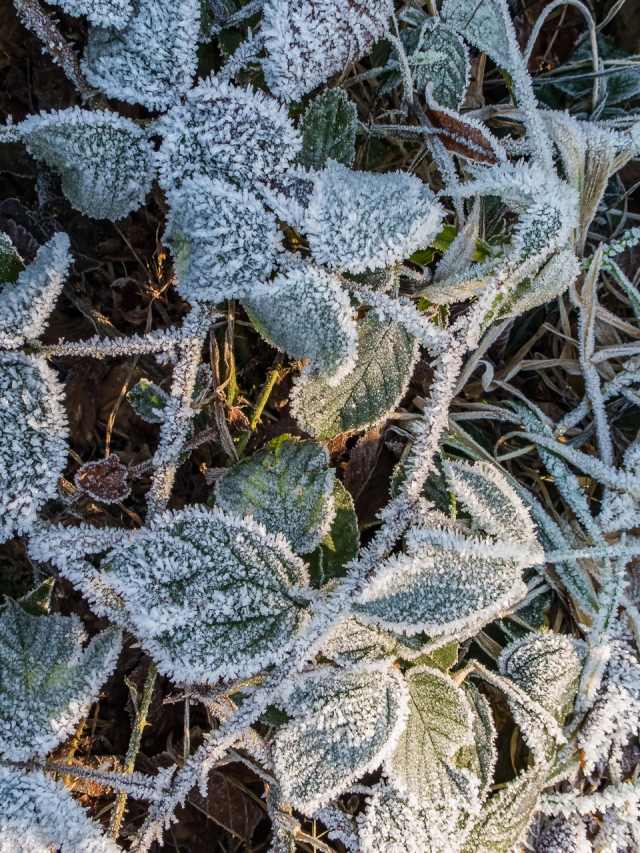 There is a great view over towards the Shard and down to Canary Wharf on a fine day, but there was a little mist around so we just had to make do with the view down over Chingford. 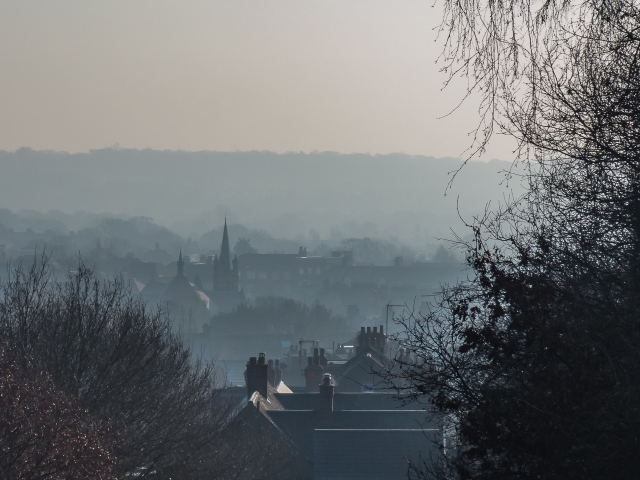 The ride down Pole Hill through the trees next to the golf course is one of a very small number of tracks that actually go down hill in the forest. So naturally it is one of my favourite trails in the park. There is also a great piece of single track on the other side of the road, with solid ground under-wheel, rather than the usual mud it was even better than usual. Though we did come across a really nice fern grove. So I had to stop… 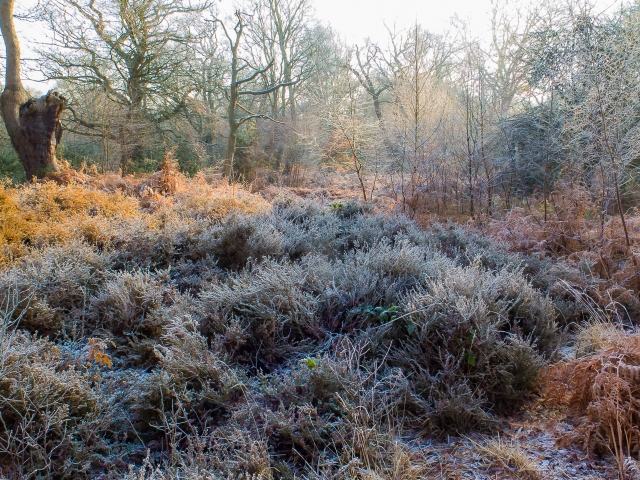 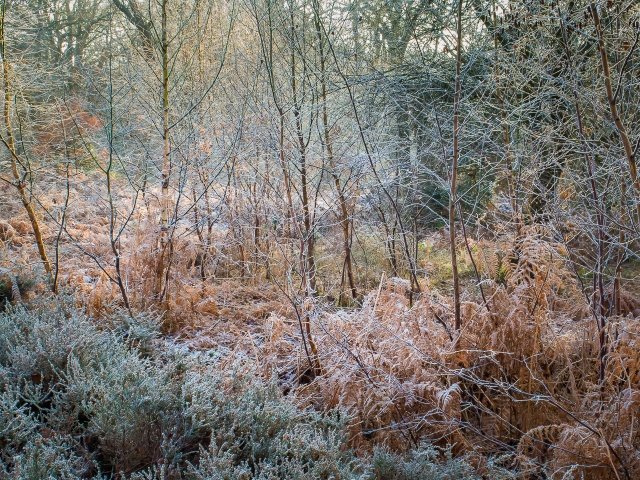 I loved the way the frost made the surface of the leaves so white and fragile. 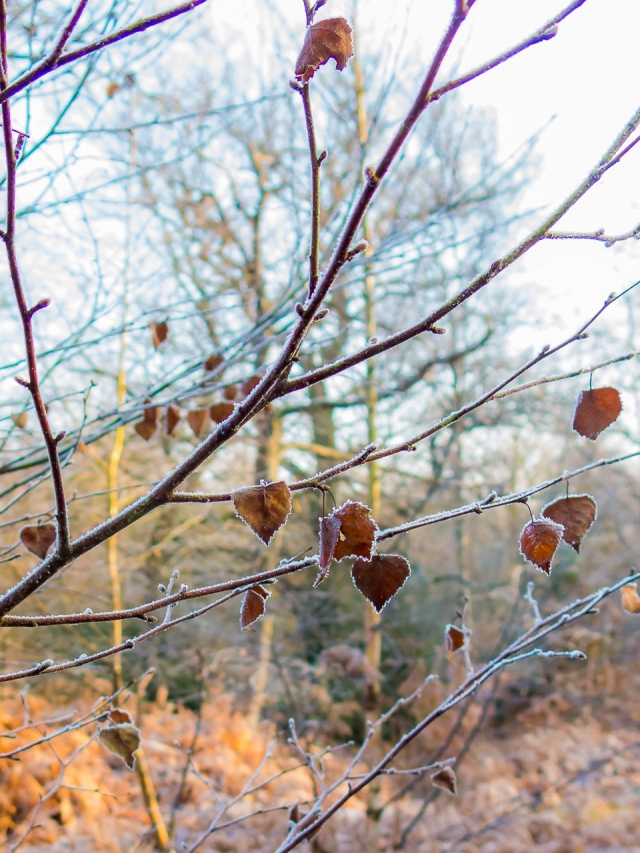 I didn’t take any more photos. Too tired and I needed to concentrate on the riding. We rode up to the tea hut at High Beach, which is a regular stopping point for a cup of coffee and a slice of cake. 2 pounds 10 for both. Wonderful, no wonder it is so popular with riders and walkers.

The ride back towards home starts off well with some really nice and mostly downhill single track, but as we leave the forest proper and meander through some smaller, but still forested parks it turns into a bit of a slog. At least today it was not muddy!

All up we were out for about three hours. It was damn good to be out and about on the bike again!

One week later. I went for another ride again today. There was no ice, but lots of mud and it was so much harder.