The day did not start off brilliantly. My throat is really sore and the air is foul, I can taste the pollution, it is very unpleasant. I have no money, I have a head cold and the wifi is complete pants  I think I am the only person in this home stay as well, which this morning is compounding my misery. I hate travel mornings like this.

Over breakfast in the home stay, thankfully complementary due to my finances, I talked to Faiz, the owner. He was telling me how bad the past couple of days had been in his little part of Agra. The ATM has not been uploaded and as no-one is accepting the 500 and 1000 rupee bills all the small businesses are starting to suffer, and those who are willing to take the old money cannot give change as the change is all disappearing. The price of staples like sugar and salt are going up as the small shop owners need to get an income somehow. I am surprised at how calm it has all been.

There is an official tourist money changer at Agra Fort so Faiz is going to loan me 4000 rupees in now unusable, 1000 rupee bills (about 50 pounds), which I will need to change. I am then going to pay him for the board and lodgings and the 4000 via bank transfer from my NZ account. |The 4000 will be my living and touristing money. Like all small businesses, he does not have access to taking credit card payments. As it is I do not have enough money to pay him for the board and as there is no ATM and I cannot get any cash, this is a win/win for both us and a very nice gesture.

Faiz dropped me at the fort, it is about 1.5 kms away from his home stay, and at the craziest junction in Agra. The entry fee is 550 rupees. The fort accepted one 500 rupee note – for the 500 part, but would not accept a second for the 50 part. I had to use one of my few precious 100 rupee notes. I almost got into argument with the ticket man. Just one of the many ridiculous bureaucratic frustrations of this lovely but annoying country. There is no arguing with a government man.

I walked in to Agra Fort in a hump. Faiz had also told me I could not take my camera bag as large bags were not allowed in the fort or the Taj Mahal. I just took the G16 camera and a bottle of water. As I was going in I saw some people were allowed to take massive back packs in and others were told to leave them in a secure room. It seemed entirely inconsistent. Though not as futile as everyone walking through an airport scanner that beeped everybody,  though everyone was waived though regardless. More bureaucratic nonsense.

This did not help my early enjoyment of the place. There is not a lot to see when you first walk in, a big empty space with lots of people in it a large square surrounded by large red walls. I yawned. Definitely not as good as the fort in Jodhpur. I did see a squirrel that did not run away immediately. I took a photo. 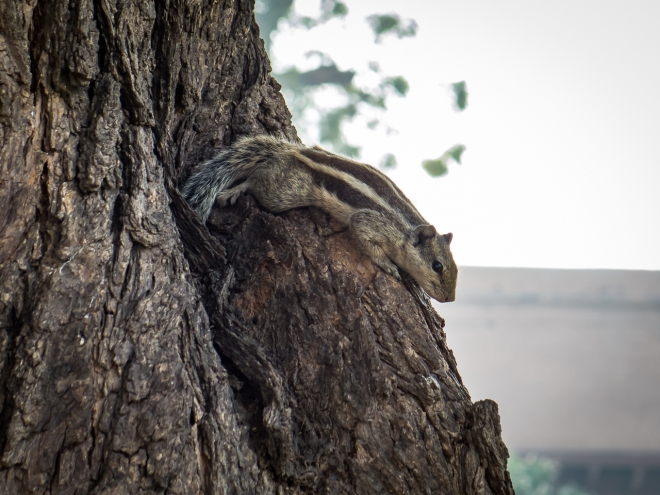 I walked about aimlessly for a while – should have taken that damn audio guide again, teach me to have the hump. I liked these arches.

And this balcony, which I am assuming someone high and mighty spoke and waved to the peasants from.

Eventually i found my way though a doorway into what I guess would have been the inner castle if this was in England, much better! Lots more things to see.

The fort was built in stages throughout most of the 16th century, and under a variety of rulers. In the early 17th century the white marble sections were added under the rule of Shah Jahan, the Muslim Mughal ruler. He also oversaw the building of the Taj Mahal and some other sites in Agra. More on them later. 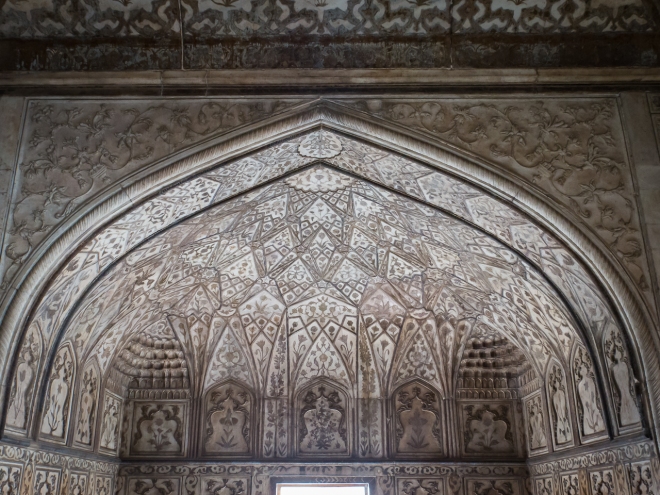 The Taj Mhal is 2.5 kms away in a straight line, but I could hardly see it through the haze, this photo has been sharpened massively to get it to stand out at all. The air is so thick. You can barely see the River Yamuna which the Taj sits beside. 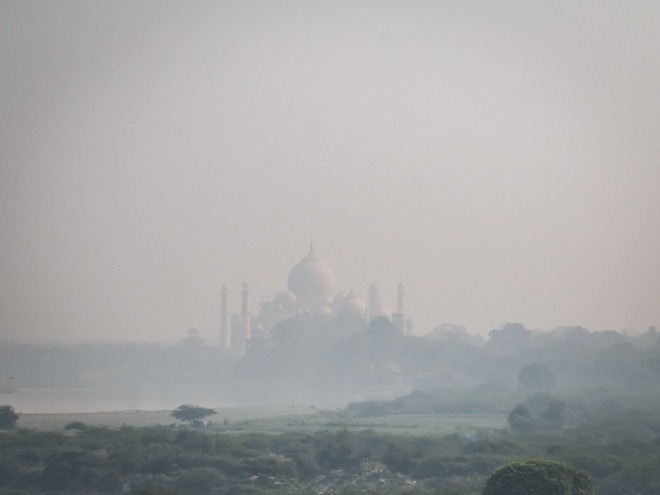 I liked the buildings, there is not a lot to see in them, some detail in the structures, but no museum like at Jodhpur. I did like the mix of the original red stone and the later white marble. The marble allowed a lot more detail to be inlaid in the source material. 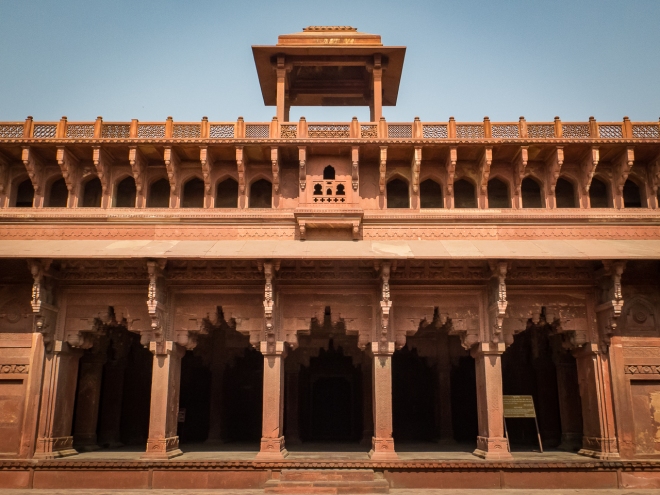 There is still some renovation work to be done, and the way it has just sort of ended was sort of cool. There were two armed guards/policemen here, not really encouraging much exploration. Stick to the good bits Phil!

I left at the right time as a lot of people were arriving as I walked out the door and got into the queue for the money changer. Quite bit of patience went into getting those photos, largely free of other tourists. I know I could have just included them, but hey ! 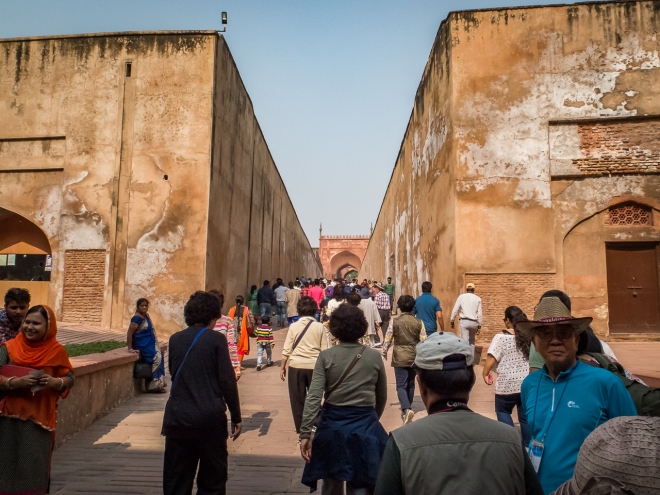 I almost got into an argument with an armed policeman in the money change queue. When I arrived there was no queue, and two windows open. A Spanish couple were being served in one window so I waited at the other, in the meantime a large melee/queue started to form and was eventually guided back alongside the Spanish couple. It turned out the guy behind my window didn’t actually serve people, he just sat there. When the Spanish couple finished and I went to stick my form and passport through the hole in the window, the policeman said I had to go to the back of the queue. I politely told him I had been there since before the queue, he knew this as he had been there as well. He put his hand on my shoulder and I refused to move. It was hot, this is India and serving the two Spanish customers seemed to take about 10 minutes and I was not willing to quit my position. It was a tense couple of seconds and eventually his attention was taken up by someone else and I got my way. Whew.

I had a grumpy, but financially happy walk back to the home stay, where I had a very nice lunch., food seems so much nicer when you know you can eat again the next day. Miraculously the internet was brilliant (for about 20 minutes) so I had a quick and pleasant Skype with El. Always makes me feel better.

Late afternoon I left the home stay with Faiz and he organised a decent price with a tuk tuk driver on the main road to take me to the Black Taj.

The Black Taj does not actually exist, there are some foundation ruins left on the ground, but that is it. The Taj Mahal was built by Shah Jahan as a memorial to his favourite wife Mumtaz Mahal. As we all know the Taj is a glorious glowing white and is built on the banks of the River Yamuna. It is rumoured that he also built a jet black Taj on the opposite banks for himself. This has never been proven, though the foundations show something was built there.

It does have a great view of the Taj Mahal, and is supposed to be the place to go for sunset photos and a good reflection in the river; except you are not allowed near the river anymore due to security concerns, so it is all fenced off. The smog has not done the sunset any good either…

However, those things aside, it is a great place to see the Taj Mahal from. Though, naturally you have to pay to enter the site, I didn’t mind this as it meant I was left alone and no hawkers and beggars were there to follow me around. As I arrived about an hour and a half before sunset I was almost the only one there for quite a long time.

Peace, in India – a rare and beautiful thing.

As is the Taj Mahal, I know that we all know it well, too well probably, but that first sight is still utterly breathtaking. It is one of those places that you just have to see in the flesh. And viewed through a manicured lawn with virtually no-one else in sight; magnificent. 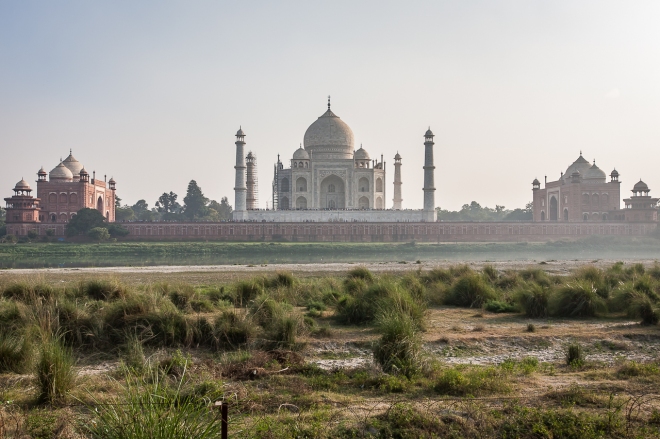 Though even from this close it was still really hazy.  I was shooting with that wonderfully crisp Canon 70-200mm lens, and even that  had issues with the auto-focus grabbing on to anything.

I had a bit of a walk around, there was quite a wait till sunset. This was the sort of scene I wanted to see in India, which I won’t see much of as I am staying for such a short time and just hitting the big tourist things. Ruins, disheveled, run down, surrounded by trees, animals about; waiting to be investigated, clambered around. The old romantic adventurer view. A fantasy world that is not my current reality sadly. 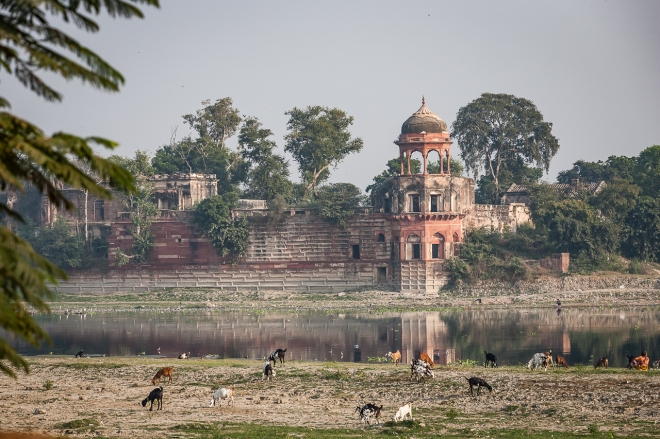 But anyway, stop dreaming Phil. There is the Taj Manal – and its thousands of tourists, just next door, not something that most people will see, you are a lucky man. 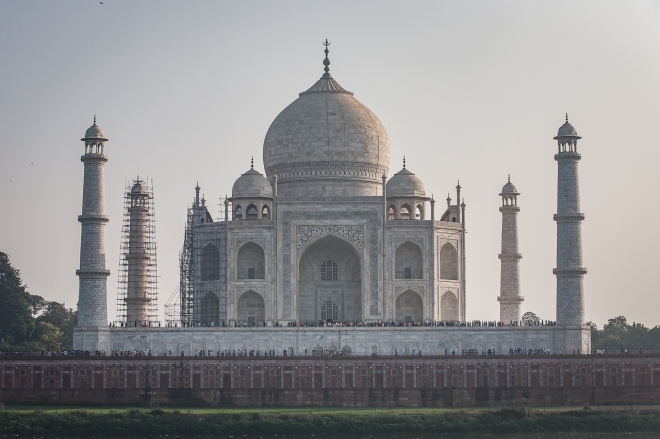 I was waiting for quite a while for the sunset, the air seemed to clear as the day disappeared, and birds…. quick, something interesting, take a photo.

Back to waiting…. There was a brief moment of excitement when a couple of eagles started to dive bomb the crows nests in the trees behind me, there was a massive kerfuffle, screeching and fighting amongst the milling birds. I tried to take a photo but it was impossible, but it was good to watch the crows join together to fight the two massive eagles.

One of the victorious crows decided to pose for me and I took my last photo of the day. The sunset never happened so I left early as the crowds started to line my side of the river bank, the peace was finally over, a pleasant end to the day. (If I blank the chaotic and stinky tuk tuk ride out).