I am an empty-nester yet again.

I don’t talk on here about my family that often , and even less so about El’s, so I am not going to go into much detail now as I do not want to intrude into their privacy.  El has two sons, Joe and Charlie. Joe has been away from home for four years, has completed a degree at Oxford and is starting his masters in Nottingham. Charlie finished his last term of school in July, got the excellent grades he was expecting and this weekend he too left for university, starting a history degree at Exeter.

Charlie is going down to Exeter with his dad and El and I are going to make our own way down and stay the night, slightly further into Devon, in Torquay. There is a music festival on in Exeter and with a lot of students turning up with their families to add the temporary population explosion there was no where to stay on Saturday night; and to be honest it is far nicer being by the sea!

We left Walthamstow about 8:30 on Saturday morning, I was expecting it to be a five hour drive, and I was not disappointed at all, or evenly pleasantly surprised. It took five and half hours to get to our hotel in Torquay.

We had a room with a view of the sea and down the coast path to Paington and Brixham;  fabulous. I love seeing the sea, only a blue sky over it would have made this better 🙂

After unpacking we took to the roads and explored Torquay. It is an interesting town on the wider Torbay, and part of the ambitiously named ‘English Riviera’. I am guessing it is an old fishing town, that embraced tourism back in the 19th century. The port is full of private yachts and motor boats now. It is part faded glory and part modern tourist spot. It took a while to warm into it, but we really liked it in the end. 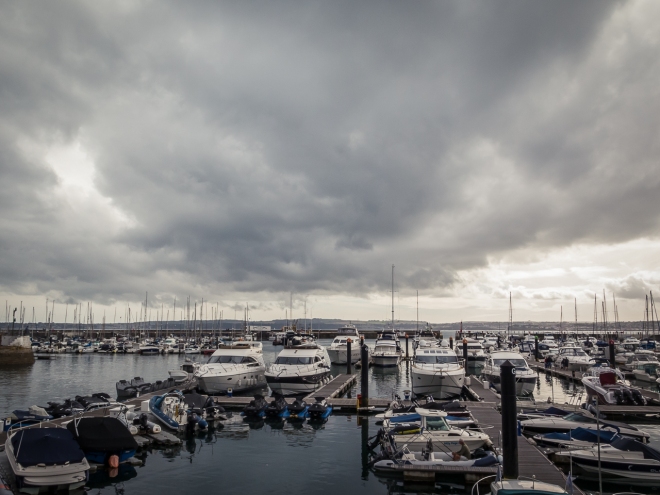 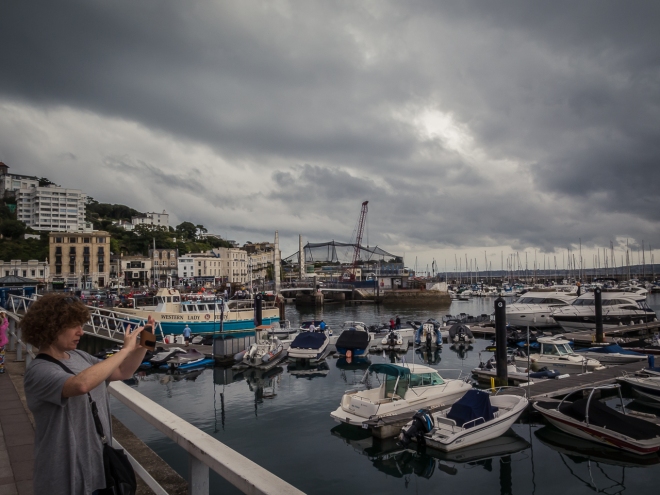 I am not a big fan of the sight-seeing wheel that now seem to dominate the horizon in every town, though I liked the relationship this one had with the surrounding buildings and land. 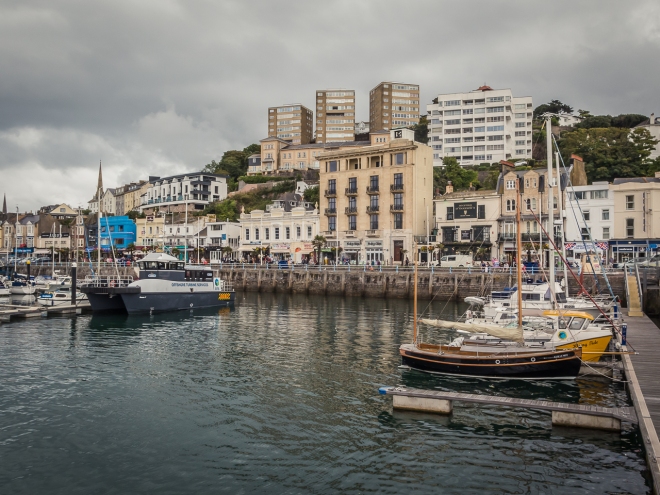 I think this photo shows the changing fortunes of many a seaside town. The good old pavilion, ‘THE’ place to hang out for many decades, shuttered and closed and the money is spent going (slowly) round the wheel.

Though tourism has not quite fully replaced fishing – yet. 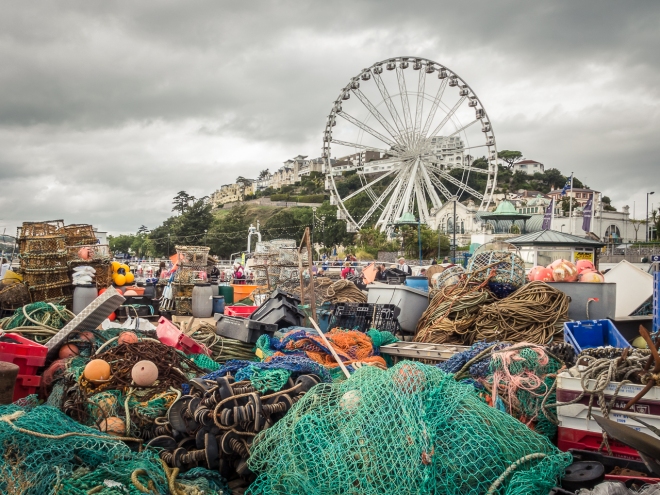 We had not banked on Torquay being so busy. We went out to look for dinner at 8:00, thinking we would walk in to  anywhere we wanted, only to discover that most places were full. We ended up sparing no expense and having a small pizza each at Pizza Express, no complaints though, it was good pizza and the service was excellent. There appears to be lots of stag/hen type nights in town, lots of groups of blokes and women prowling the streets and filling the bars and restaurants, I think it is that sort of town now.

It does have a nice waterfront to walk along and the lights around the bay are lovely. 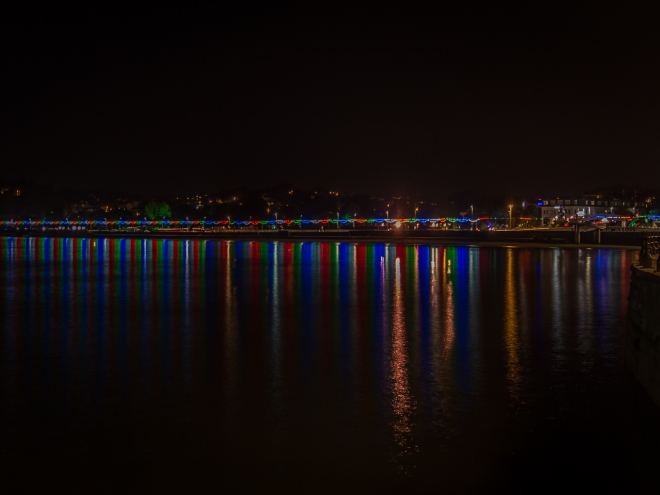 We didn’t linger in the hotel on Sunday and were on the road soon after breakfast, heading off on the slow road into Exeter. it was very nice being by the sea, I really miss it, and just being near it again does give me a real lift.

Charlie is staying in halls for the first year and had an arrival slot of 12:30-13:00 to unload his stuff into his room. El and I wanted to have a look around Exeter, so parked up and had a walk around the centre of town. Starting down by the really nice quay. 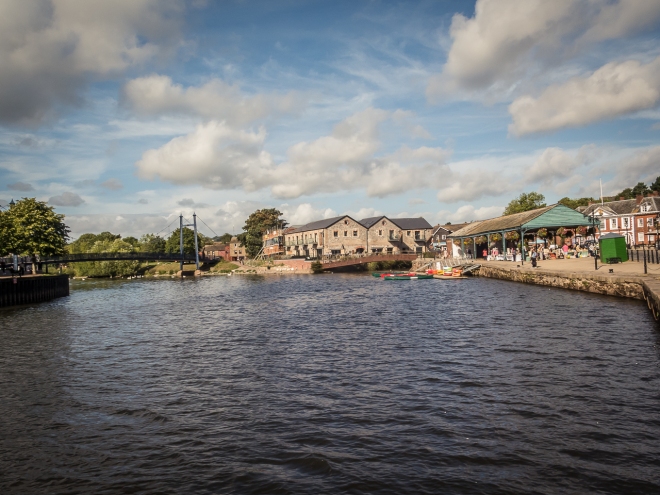 I have been here before, almost four years ago to the day, and explored all the historical places back then. Though we did pass a few on the way up to the cathedral, starting with the wonderful medieval bridge, crossing a piece of grass that is a hundred or so yards from the river.

We stopped for a coffee in the square, the church behind the cafe is the last church Saxon Church in England, consecrated in 1065, the year before the Norman invasion.

After coffee we walked up to the university area on the edge of town, I left El at Charlie’s home for the next year, to wait for his arrival and went off for a walk on my own. 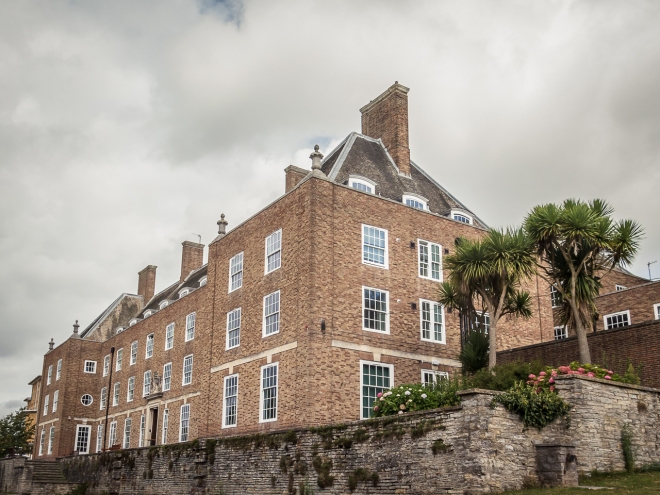 I walked up past the remains of the castle walls. 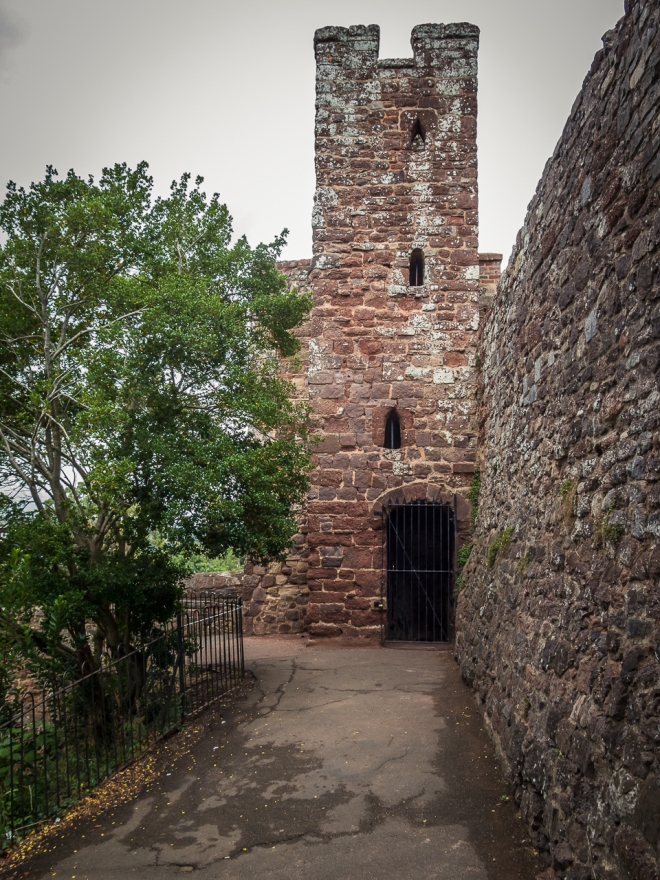 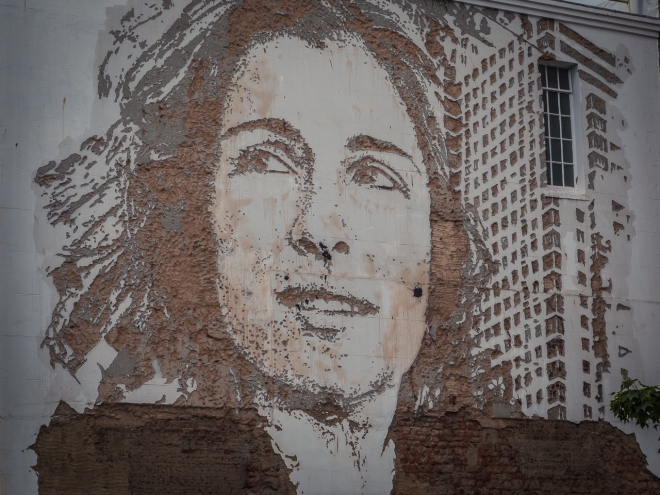 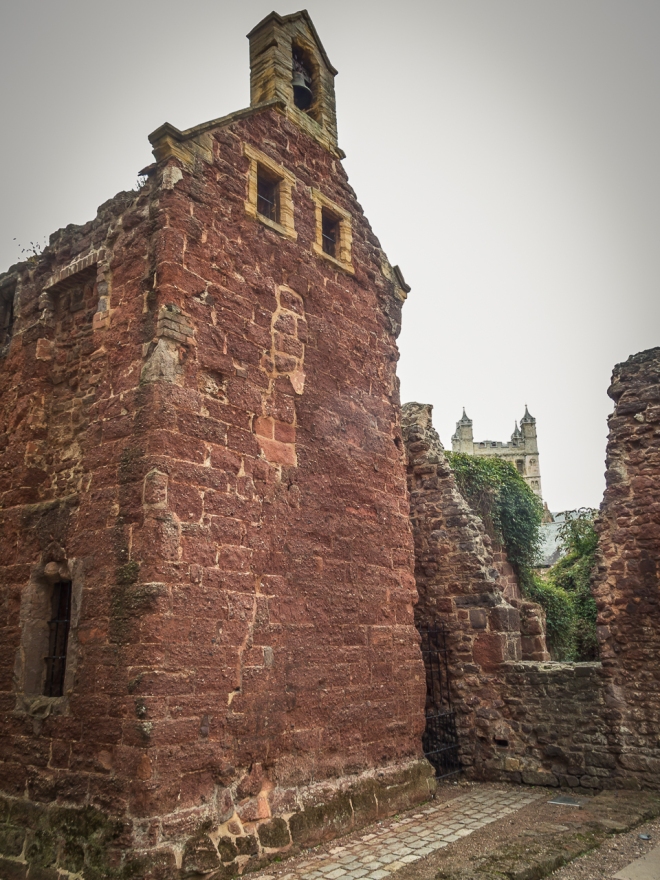 Ending up back at the cathedral again. 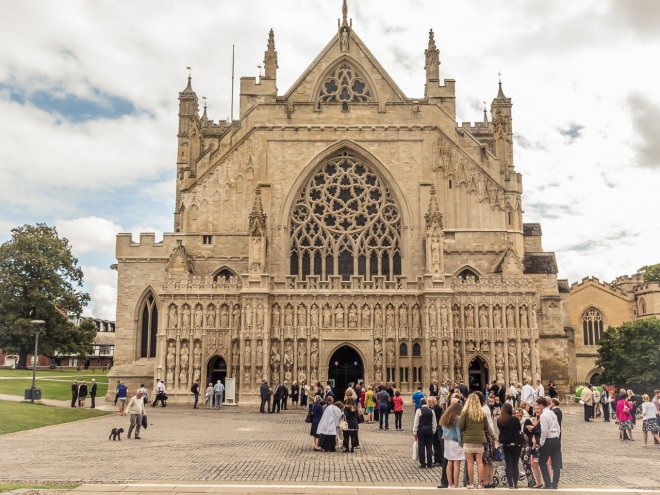 Soon after arriving in Cathedral Green I had a call from El to let me know that Charlie was settled in, so I went back to the car and drove up to the uni for a look around his room, before we all went for a late lunch in a nearby pub.

This lovely day out was followed by a less than nice five and half hour drive back to London and home. We arrived knackered at 8:30 and didn’t stay up much beyond that!

For the next wee while, during term anyway, El and I will be empty nesters. A new chapter in our life.

2 thoughts on “Emptying the nest.”