Thursday morning was a bit grey and damp and the renovation work in the flat above us had  started by 8:30 so we decided to leave one day early and stop in Bath on the way home for a night. We have been talking about going to Bath for ages, but there is always somewhere else to go. As we had to drive past it on the way home it just seemed like the right thing to do. We booked a hotel online, packed the car and drove off. Into the rain…

We arrived in Bath just before lunch time, the room in the hotel was not quite ready so we decided to dump the bags and go for a short walk. As we stepped outside it absolutely poured with rain, very un-English like rain as well, proper rain rain… We went back inside and had lunch until the room was available. Luckily that was the end of the rain for the day, the forecast was correct and we had a pretty good afternoon and evening.

I selected a hotel that was outside the immediate centre of town, I didn’t want to have to faff too much with the car, and a lot of the central hotels had no car parking. We were only a 10 minute walk from the centre, and it was a nice walk in.Like many Roman and medieval towns Bath is located on the side of a river, in this case the River Avon. We were staying on the far side of the river.

Bath is famous for two things, famous in my mind anyway. The Roman Baths and the Royal Crescent, and we visited both. On the way to the Royal Crescent we passed through The Circus, a roundabout surrounded by wonderful Georgian Terraces. I suspect that some of the pictures I have seen on the internet purporting to be the Royal Crescent, were actually taken here. I much preferred this to the nearby Royal. Crescent. The circus was built between 17544 and 1768 and the buildings are 318 feet from the centre of the circus – the same as Stonehenge. John Wood (the elder), the designer believed that ancient Bath was a centre for Druidism. I really like knowing (and then forgetting) these little snippets of local history! 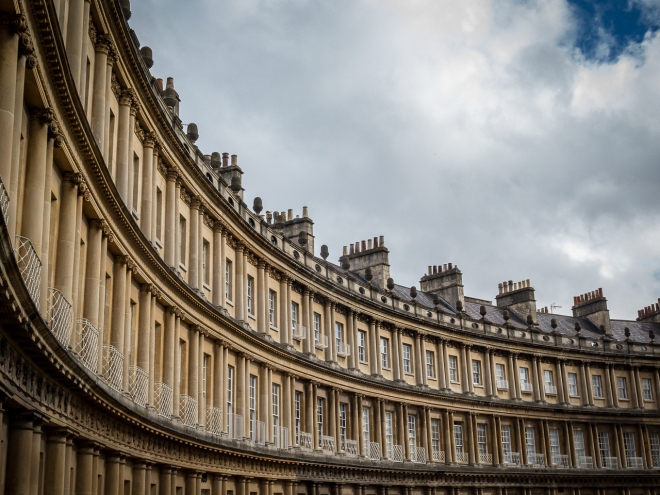 The Royal Crescent was designed by John Wood (the younger), the son of the architect who designed The Circus, though it was built just prior. It is still magnificent, but a fair bit of it was covered in scaffold and there were too many cars parked outside to see it in all its glory. There were a lot of tourists here as well.

We took a walk around old Bath after leaving the Royal Crescent. Bath is a very old town, the Romans built their first spa here in 60-70AD but there are hints of a long history prior to the Romans coming to town. It is a World Heritage site and is well preserved and very nice. We would move here tomorrow ! Even though it is a tourist town and quite busy when we visited, there are plenty of places to wander to get away from the business. The centre had a nice feel to it. 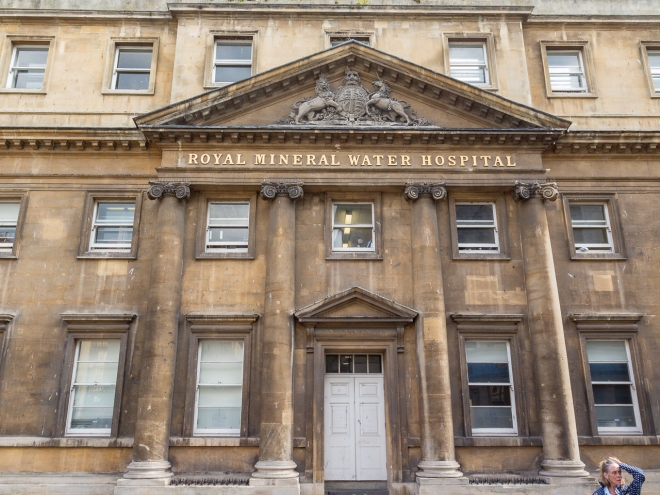 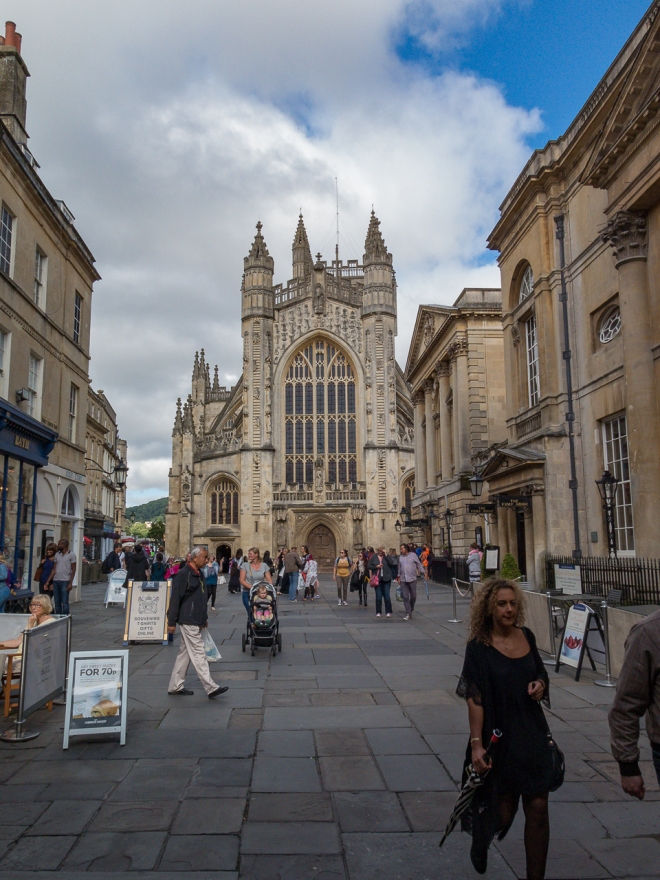 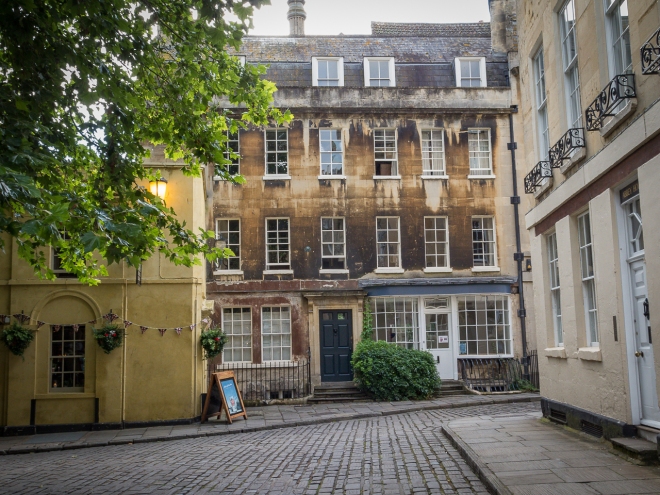 One of the things I like about my travels and exploring is finding out little titbits of history, things so minor that they are totally irrelevant to almost everyone, but finding them can make a day. Today I found Sally Lunn’s house – the oldest house in Bath, but more importantly the home of the Sally Lunn bun. I loved Sally Lunns, a few years back I used to have one every day for morning tea from a bakery near work. I never knew they were actually named after a person!

We had booked ourselves an early dinner in a well know vegetarian cafe behind the cathedral so decided to just hang out in and around Bath for the rest of the afternoon, we crossed the Avon behind the train station and found this building with high river marks and dates up its side. There must have been some major floods here in the past, I was standing up right when I took this photo, so those marks are well above my head.

The river was very benevolent today though. 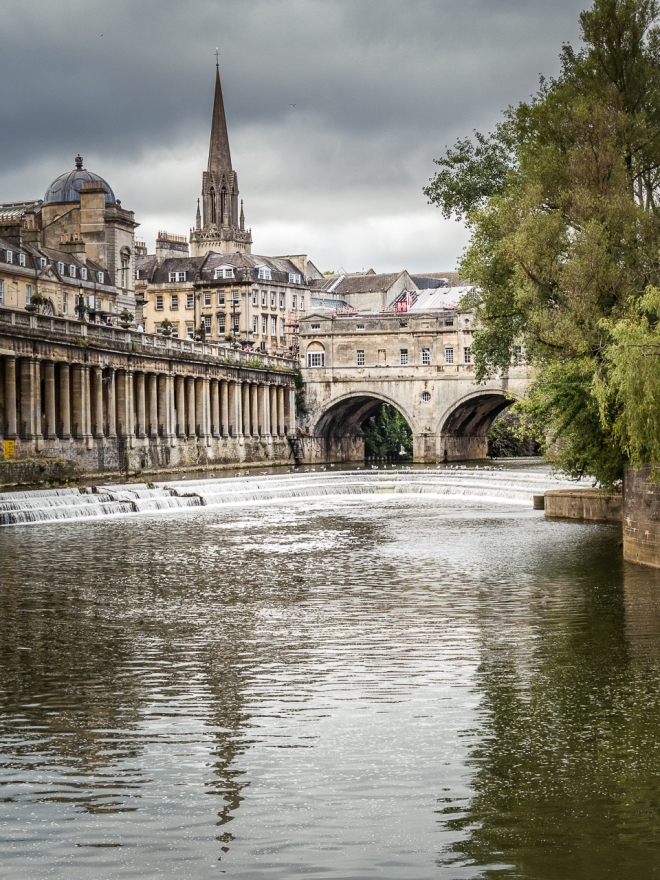 The vegetarian cafe was excellent, an imaginative and different menu and the food was excellent, as was the wine we had with our food. I am glad we had decided to go and visit the Spa after dinner, it gave us a good chance to walk the food off !

The Roman Baths are the main attraction in Bath, I have not been before, though El has visited a couple of times over the years and told me the museum just gets better and better. It is not particularly cheap to enter, but well worth the money. It is excellent – one of, if not, the best local museum I have been to. Even better was that it was open until 10:00pm in summer – which mean for a much smaller crowd early in the evening than the middle of the day. 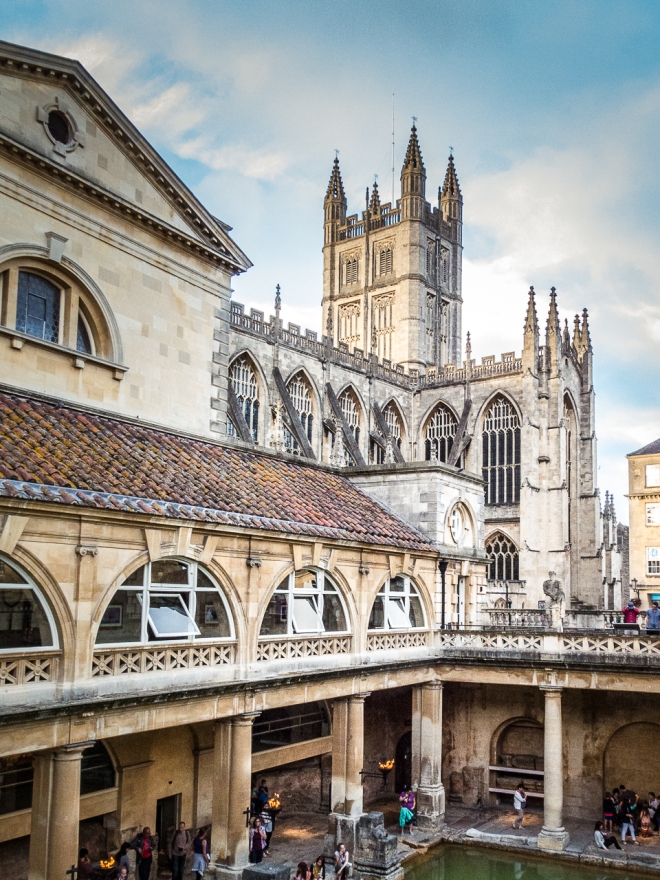 The baths were built by the Romans between 60 and 70AD, probably on the site of a Celtish site dedicated to the god Sulis, known as Minerva by the Romans. There was a temple to Minerva here as well as the bathing area. The site was redeveloped many times up until the 5th century when the Romans left and the water ways silted up.

Nothing much happened again until the 12th century when new buildings were erected, there was plenty of further redevelopment up until the 18th century when the current building shell was finally built by the good old Woods – both father and son involved. I loved it, we both loved it.

As I said earlier, the museum is really good. Well spaced and paced and designed to cater for a lot of people. There are some interesting things to see and plenty of information both visually and through an audio guide. I took a lot of photos! 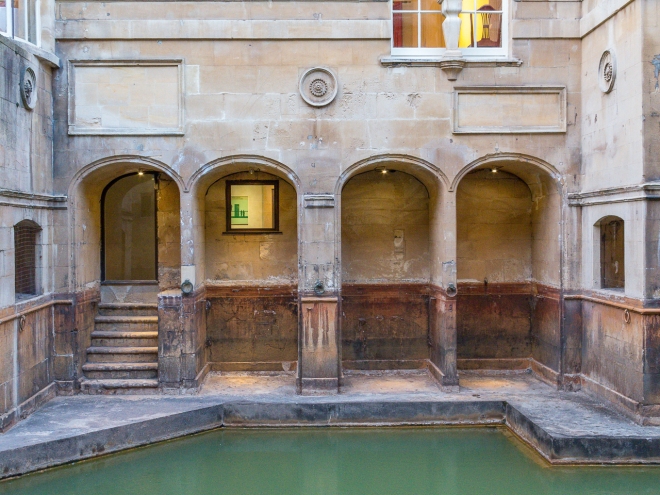 It really is a terrific place to relax on a relatively quiet evening. 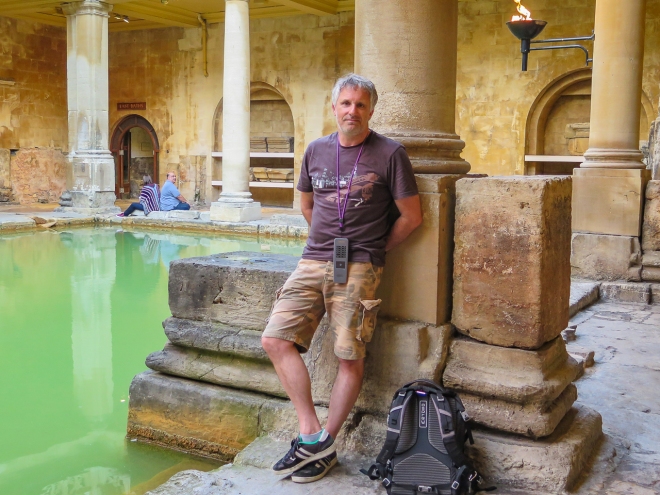 The temple pediment and Gordons head, is a magnificent relic, probably 1st century and the carving is stunning, remember this is 2000 years old! It was discovered in the 18th century and no-one really knows what all the related carvings mean, there have been many interpretations over the years. 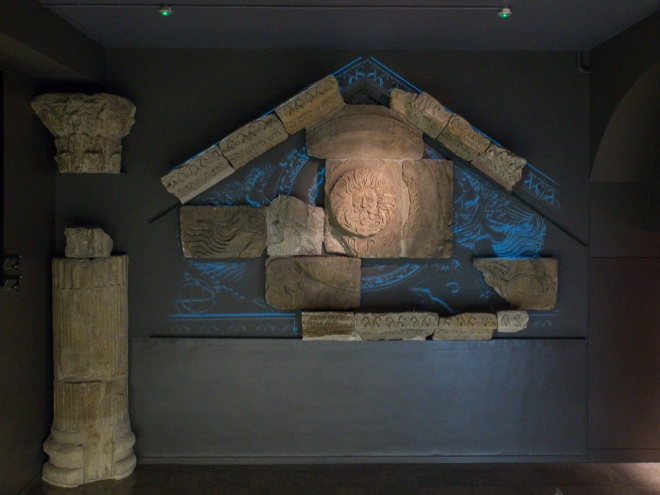 This gilt bronze head of Sulis Minerva was found in the 18th century renovations, the statue would have stood in the temple near the baths. 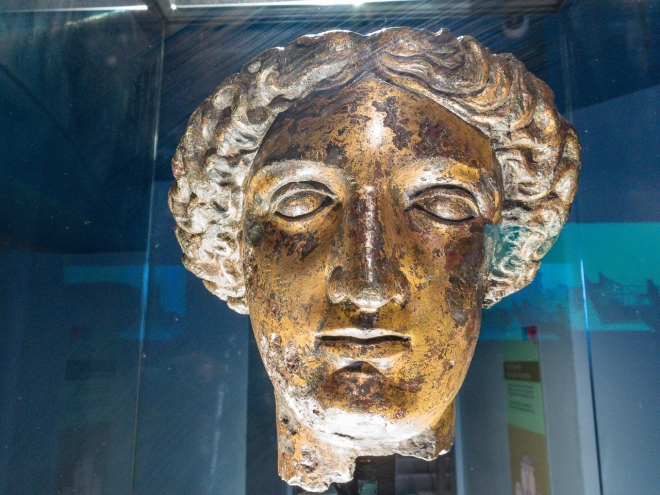 There were a few statues and sculptures in the museum and stupidly I did not make note of the names. 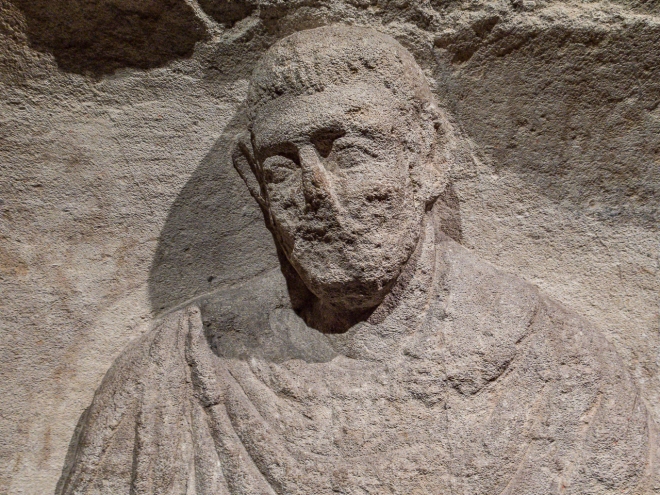 It was mid-evening when we left and took a slow walk back to our hotel, the sun was setting over Great Pulteney St.

Arriving back at the hotel just as the sun was finally going down over the grounds at the front of the hotel. 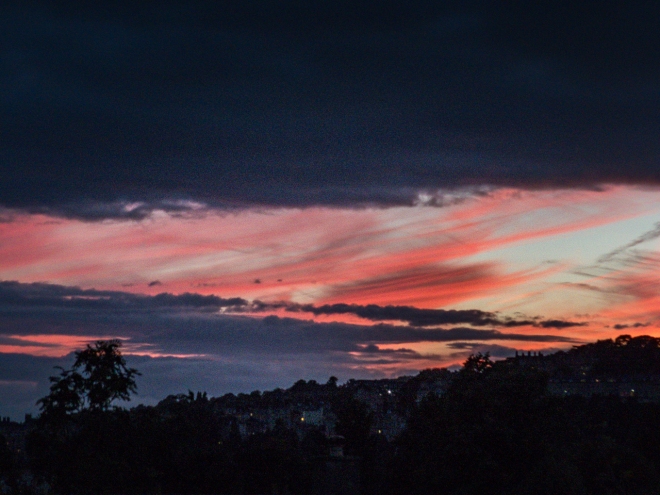 As expected we really enjoyed Bath. Though we did not linger on Saturday morning, packing up the car and heading back to London. On a gloriously sunny day, of course!