I left the B and B in Westleigh at 9:30, after waiting for the rain to stop, and to let the monster breakfast go down, fuel for the day. My legs felt good after yesterday’s walk, which pleased me. I haven’t done a lot of walking; or much else this year, and had anticipated seizing up after a day on the road. I felt better than I had in weeks. Fresh air makes so much difference to how I feel.

I joined the SWCP and Tarka Trail where I left it yesterday, by the side of the River Torridge just outside Instow. The path follows the river all the way to Bideford passing under another huge road bridge. This one with added mermaid.

There were a few more old and rotting boats just outside Bideford. I think I could do an entire post on old boats. Which might be something to explore if I ever come down this way for a length of time, I am sure they have a history. Even if it is not that interesting at all.

At the defunct Bideford Station I said goodbye to the Tarka Trail as the coast path heads across the river and into Bideford. I will not say it was sad to say goodbye, we had fun while it lasted, but our time was up, I need some hills, mud and the smell of the sea. 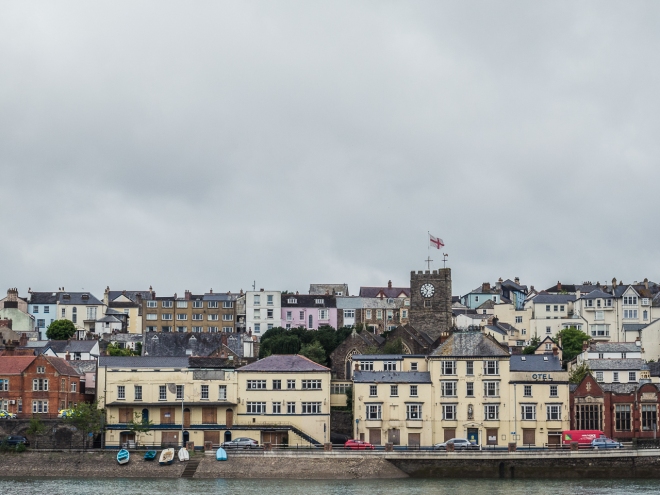 I stopped for coffee and  a brief rest before heading off again, I was trying to maintain a reasonable pace today as rain was forecast for late afternoon and though I was prepared for it, it did seem silly to get wet if it could be avoided. Now we were not joined with the old railway line that is the Tarka, the coast path was allowed to amber up and down small hills, through woods and fields and get all muddy – and a lot more fun.

At the top of the hill there was a nice view across the Torridge to where I started this morning in Westleigh. 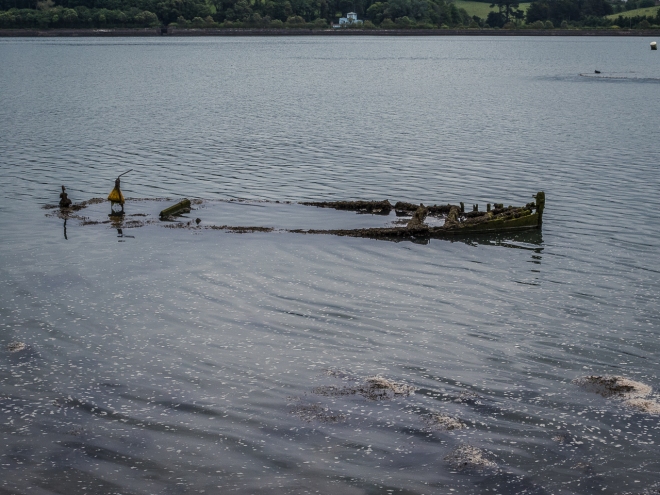 Though it looks like this old tug (is it a tug?) has someone living on board and is being renovated.

The path takes an inland route for a while to bypass a large dock site. I have heard that our councils have all been struggling with massively reduced budgets in these times of austerity, and it was obvious in this section of North Devon, an area particularly struggling that clearing paths was not on any sort of priority spending list.

I walk in shorts, I have not really been a long trouser walker, maybe if it gets cold I will put leggings on, I have always wondered why so many walkers in Britain walk in long trousers. Today I found out why. The nettles through here were pretty bad, I got stung on the stomach – through my shirt. Picking my way through to avoid the worst of the stingers slowed me right done, and meant I spent a lot of time looking at the ground. 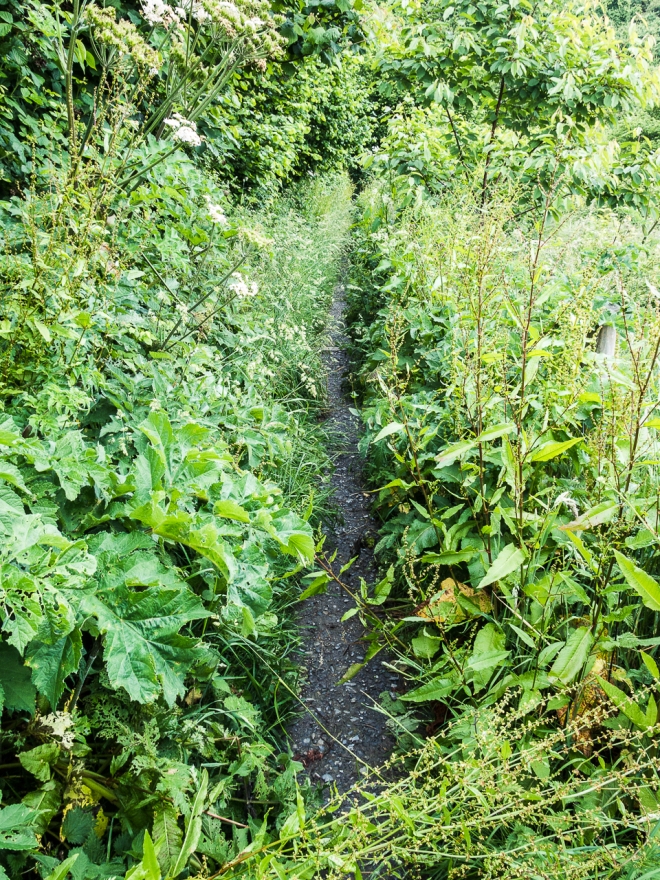 I soon arrived in the lovely little village of Appledore, there were a number of pubs and cafes as I entered, and though it was lunch time I thought I would walk through town and find somewhere on the other side. 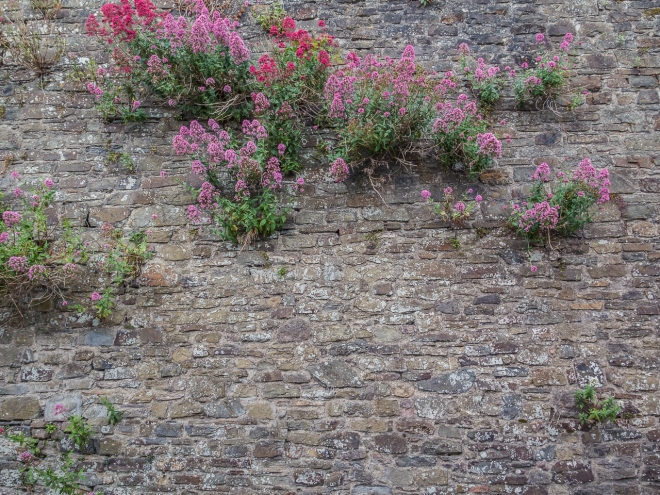 Which was sort of a mistake as there wasn’t anything on the other side to stop at. Eat when you can is my new motto. I liked Appledore. Especially this narrow cottage!

Popping out the other side of the village I could see Westward Ho!, my destination for the night just up the road, however I had to walk around the Northam Burrows Country Park first, an extra couple of miles I suspect. Not that I was complaining at all, the sun popped out for a while so I took a break, shoes off, muesli bar snack and some water and I enjoyed lying on the grass looking back at Instow for a while. I haven’t done that in ages. 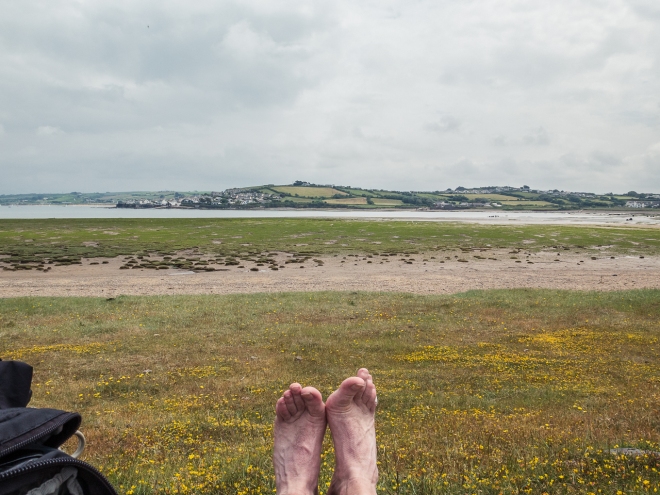 Once the sun disappeared I took a glance towards Westward Ho! and saw that the threatened rain was looking to be a reality, so it was shoes and pack back on again and I dragged myself reluctantly back on to the path.

The Burrows is an area of significant scientific interest for its mix of salt marsh, grassy plain and pebble lined beach. It was an interesting place to stroll and if it wasn’t for those very dark clouds I would have taken a bit more time to explore.

The Burrows also contains the course of the Royal North Devon Golf Club, the oldest links club in England. What makes this course special to me is that there are horses on it. Grazing right next to a tee… Lovely !

At the tip of the park, after approximately eight hours of walking the South West Coast Path I finally hit the actual coast. Yay! It was great to hear waves hitting the beach, I really miss that sound.

The walk to town was made at a cracking pace, hoping to get there before the rain arrived on me, I could see it was pouring down in town, so I am not sure why I was rushing into it! What a great beach.

I was pretty lucky, I just caught the end of the shower, and though I had to put a coat and bag cover on I didn’t get too wet. By the time I had found a coffee shop to sit in the sun had come out again and it was a pleasant half an hour spent drinking coffee, a banana milkshake and noshing on a piece of cake. I stopped to take a photo of Lundy Island before heading up the hill to my room for the night. Why,oh why are they always at the top of the hill !!

I was staying in an Air B and B for the first time. I had found it really hard to get accommodation for this trip, I guess I left it a bit late and it is supposedly summer. So many places were booked out on the usual web sites I use to find places. I really enjoyed the Air B n B though. The walk up the hill was well worth it for the view. These clouds – Yum!!! 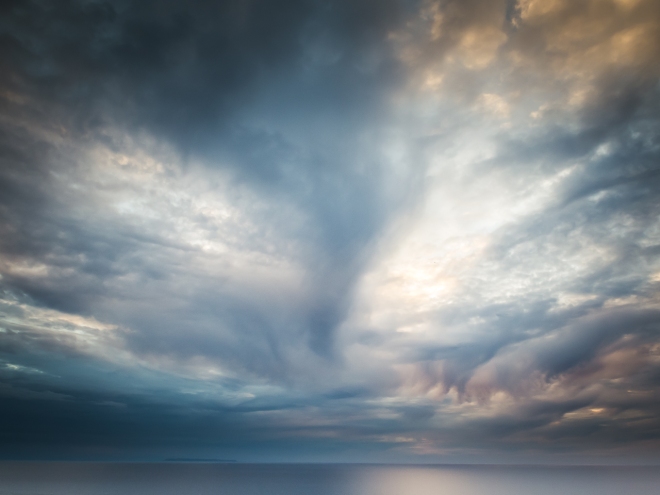 In an effort to avoid a constant stream of fish/burger and chips meals I went to a Thai restaurant back in town for dinner before heading back up the hill with heavy legs and a full stomach to watch England play Russia in England’s opening game of Euro 16. England were ‘disappointing’. As usual. To make it worse the England and Russian fans were a disgrace, which made for unpleasant news reading after the game.

This was partly made up for by that great view from the room, over the mouth of the Torridge and up the coast to where I walked last year.

It was another good day’s walking, a bit longer than yesterday, a few more lumps to walk over compared to all that flat walking previously. Tomorrow there will be more than a few lumps to cover, back to the coast path proper – I really cannot wait.