The morning broke open with a better sky than it closed with last night, solidly grey but not raining at least. Today we return to the car and continue our journey south. Not a long day driving again, we are spending a night in Leigh, an hour north of Auckland. We were not in any rush.

We took in the view from the front of the B and B as we were packing the car, I love the way the mist is curling up out of the hills, feeding that big wet blanket looming above them. Perhaps that rain might come back? 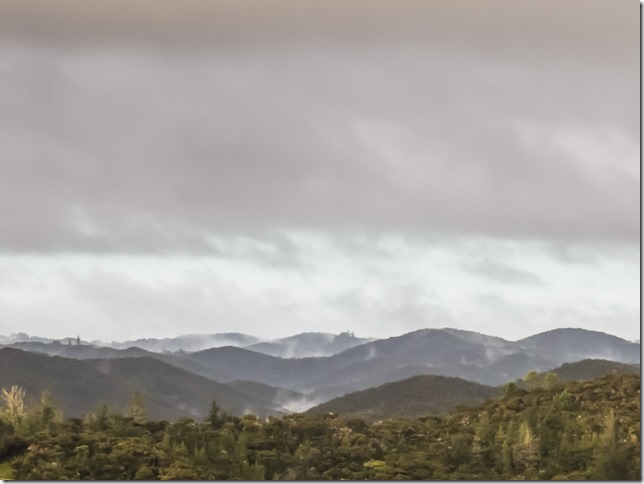 We left just before 10:00 and I made my first stop not far out of town, my last Northland church on this trip. The church at Taumarere was originally built in Paihia in 1874 and was barged here in 1926. It does not look like it is used overly much anymore. I was trying to get a photo with the mist and low brooding hills as a backdrop, but there was not enough space on the narrow strip of land surrounding the church.

Our first stop was in Kawakawa at the famous HunterWasser toilets. I had been looking for these a couple of days when we passed through Kaitia on our way up the country as I was sure they were in that town. I was really pleased to find I was wrong and we got see them today. I have heard about them before but never seen them in the flesh. Friedensreich Hundertwasser was an Austrian architect and artist who migrated to New Zealand in 1975, he passed away in 2000. He has designed buildings all over the world and I always thought it bizarre he built a public toilet in northern New Zealand. They are a shining light in an otherwise unspectacular rural NZ town. And they are free to use ! 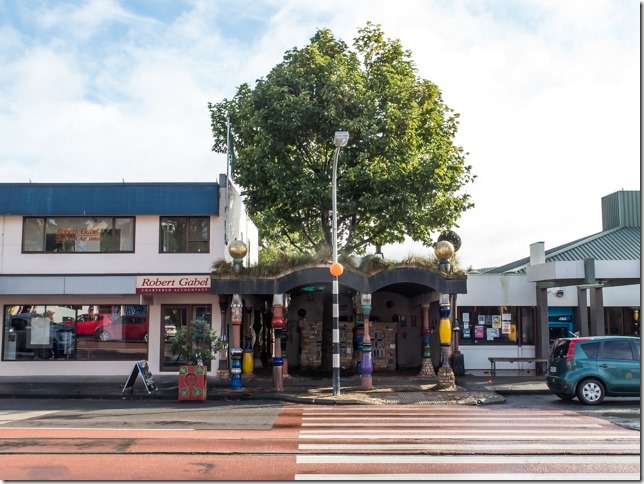 Whangerei Falls was a fairly regular stop on any northern journey, though the car park and facilities have improved since I was last there, there are some facilities at least. The falls sit in a residential area and the size of them really come as a surprise to the newcomer. At 26 metres high they are bigger than you would have thought.

There is a nice circular path from the top to the base and back up again to the car park. They were a really enjoyable diversion on our travels south.

There was a huge amount of spray coming off the falls, I took a quick snap before heading back into the trees. 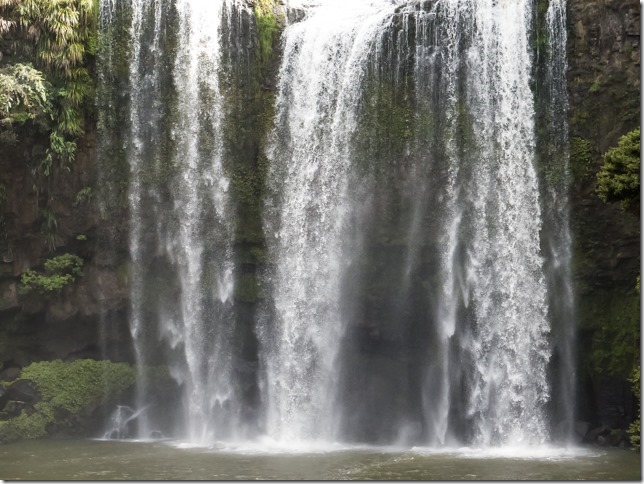 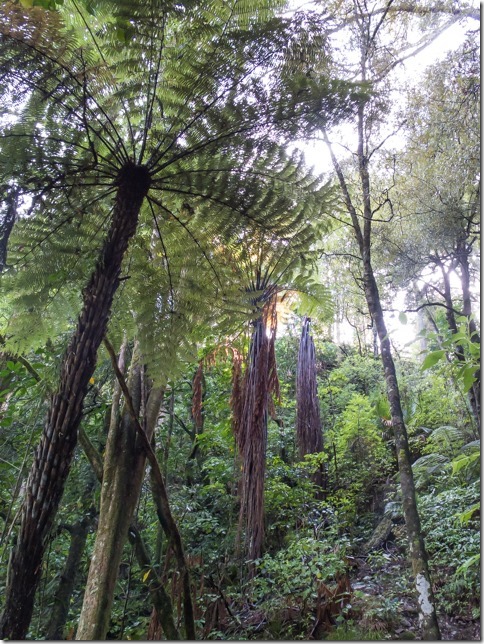 We were meeting my daughter and her B/F on the way back south. We had agreed to meet in Matakana but sadly ended up being forced to meet at the Brick Bay Winery

The pinot gris was really really nice and I was gutted to be driving. Even though it is sunny in this picture, a very heavy shower passed over soon after, and heavy showers passed over for the rest of the day, we got damp a couple of times. Me thinking ‘I wish I was not driving!’

After a soothing glass and a shared cheese board we headed off to nearby Snells Beach for a walk. It has been a popular Auckland holiday destination for many years, but I was shocked at how big and built up it had become since I was last here.

The beach is still lovely, and this photo of my daughter Mel and her B/F, Dickie is one of my favourites of the whole trip, the light was just perfect for those few minutes.

As you could tell by those clouds, we did not get to stay for much longer and they were soon on top of us, and they dumped a fair amount of rain in a very short time. Though it did not seem to bother these two old blokes netting for their tea. 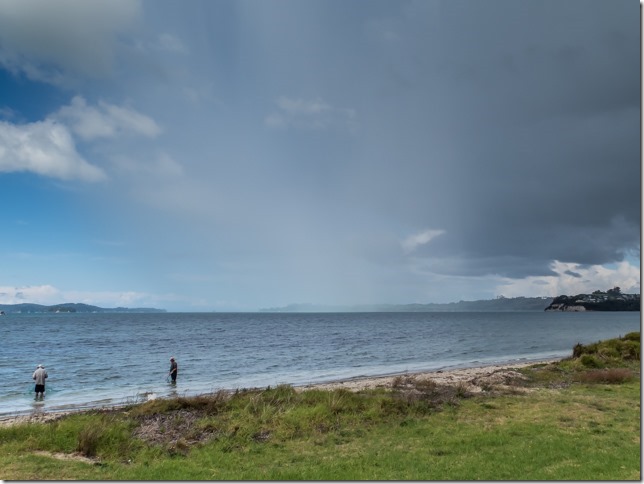 We stopped in Matakana on the way out to Leigh to pick up some provisions, cheese, crackers etc for a pre-evening drink. El really liked Nosh, the deli we shopped in, and Matakana in general.

I had rented a bach for the four us to stay in. The original plan was my son Aiden, and grandson Mason would join us as well. However, Aiden had tickets to a music festival in Wellington and had stuffed up dates for the weekend… A bach is basically a beach home, they used to be small and full of shabby furniture, mismatched crockery and cutlery, piles of board games and a BBQ outside. Seems these days that most cost more than a million dollars and are palaces for the rich. NZ is changing like the rest of the world.  Though, our bach, in the village of Leigh, is a proper bach bach, we loved it. 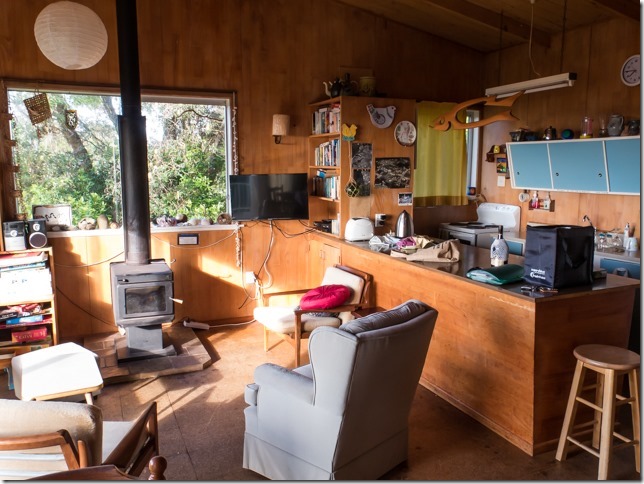 Brown Fibrolite is classic New Zealand bach building material, it made me nostalgic for times old.

I was really pleased that I had picked such a good place to stay, Leigh itself is a little bit inland and does not have the spectacular sandy beaches some of the other places on this stretch of coast have but this place made up for any of that. El really liked it though she was not so impressed with the loo poetry.

The other reason for selecting this place was it was walking distance of Leigh Sawmill Cafe, where we went for dinner – and a couple of bottles of, you guessed it, pinot gris.