Bristol four piece Spectres, are definitely the band I have listened to most in the last year, especially since their debut LP ‘Dying’ arrived on my doorstep in February. Their music is pretty uncompromising, it is dense, it is dark and it is noisy, but if you dig deep enough you will find some lightness and pop touches – you would need a long handled spade though! To me they sound like the bastard off spring of two great bands – A place to bury strangers and early Swervedriver – with a little bit of Sonic Youth thrown in.

As well as liking their music I like their attitude to the music business as well. In protest of the corporate take-over of Record Store Day, along with a great article from their record label, Sonic Cathedral, instead of releasing a new single on the day they are releasing one copy of that single a day, every day, for a year. It took me a long time to land a copy of the split single with Lorelle Meets the Obsolete, with each band covering the other. Spectres played ‘Stealed Scene’.

In a very amusing piece of publicity they also released their last single ‘Spectre’ the same day as the abomination from Sam Smith that is the theme song to the new James Bond movie, Spectre. Somehow, ‘by accident’ a version of this ended up on YouTube under Sam Smith’s name and their version was reviewed by numerous leading newspapers, as well as by numerous, bemused and unhappy Sam Smith fans on Youtube. Coup !! It is not a typical Spectres song though…

Though they are currently touring the UK I was not expecting them to be playing London any time soon, however, I discovered yesterday that they are playing tonight as support to ‘The Naturals’ under the pseudonym of ‘Buckfast Crimewave’. Though I have a bit of head cold I could not miss the opportunity so decided to go along.

The gig was at Power Lunches, a small bar in Dalston, not too far from home fortunately, given I was not feeling 100%. I liked Power Lunches, it was small, a bit dingy and dark, but they were playing what sounded like some really old school US punk rock on the PA, and sitting in the bar waiting for the first band to come on was quite enjoyable.

The bands play in a small basement, it was very dark, photography was going to suck… I didn’t stay for the opening act, not really my thing. As the music was so good up in the bar I went back there and waited for Spectres to go on.

Earlier today Rough Trade Records announced their top 100 albums of the year, it did not have Spectres on it. The band announced via Twitter that as no-one liked their old songs, they would only play new material at the show. Which they mostly did. The light was complete rubbish, there was someone shooting with a flash which I should have done, but didn’t. Next time I see them I will take a flash with me. 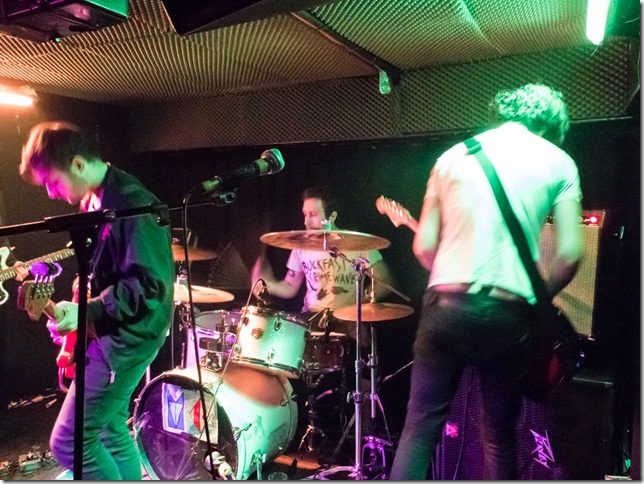 From memory they played four new songs, with the last one definitely pushing a Sonic Youth vibe and was my favourite of the new tracks.

This was not a tune up… This was using tuning as a sound effect !

They played two old songs, I think Sink and Where Time Sleeps… It was a short but gloriously noisy set and I am looking forward to seeing them again, but as the headliner. I was very tempted to go and see them in Manchester on the following night as I have Fridays off of work, but it was too expensive to get there and working less days means getting paid less money!

A line from the song ‘In a box’ from their earlier Hunger EP seems an apt description about how I feel on occasion. “I want to catch a train to any where, I want to go on my own, come back on my own’.

I watched a couple of songs of the headliner “The Naturals’ but like the opening act, musically they were not my thing. If I was feeling better I would have stayed and watched their whole set, but I felt rubbish so I didn’t. Sorry The Naturals.