After a fairly long spell of not going to gigs, this is my second in a month, and I have a further show to go to next week.

I have long been a fan of droney, shoegazey, psychedelic rock so when the record label Fuzz Club announced the Fuzz Club Festival weekend at London Fields Brewhouse; just a bus ride away, I was interested enough to check out who was playing. Discovering that The Telescopes were on the bill for the Friday session, I bought a ticket for the night straight away. I have liked The Telescopes since the early nineties and had recently bought their great new album ‘Hidden fields’. I have tried to see them in London once before but they were delayed coming back from Europe and I couldn’t be bothered hanging around the venue to wait. Maybe not a really really dedicated fan…

With five other bands on the bill, across two stages it promised to be a good night. I had a couple of albums by The KVB who were also playing and after checking out some of the other bands I was really keen to see Portuguese three piece 10000 Russos as well. I was very excited !

Naturally the traffic was a bit crap and the bus seemingly stopped at every bus stop between Walthamstow and Hackney so I ended up arriving at the venue too late to see the first act, Throw Down Bones. Reviews say they were good too. I have not been to London Fields Brewhouse before and found it to be a great little venue built in two railway arches, allowing two stages, two bars and two sets of loos – important for someone in their 50s, which, like me, a number of the very mixed audience appeared to be.

I had not heard much (if anything) of Italian four piece New Candys and got fairly close to the front as they were warming up. I brought the Canon G16 camera tonight, I had thought about bringing the big Canon 5d, but was really glad I didn’t as the light was too low and the old 5d would not have coped at all. I was not using flash so was shooting manually at a higher ISO than the 5d was capable of (maybe I should buy that new one

). I took a couple of photos of one side of the band before getting pushed out of the way and forced a bit further back. I really enjoyed New Candys, they reminded me a bit of Black Rebel Motorcycle Club (when they were good), a bit poppier than some of the other bands tonight. 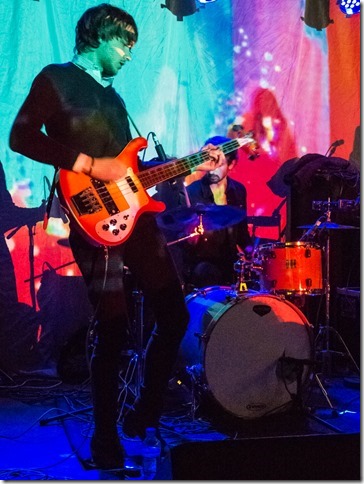 I did not stay to the end of their set as I really wanted to get a good spot for The Telescopes, I have seen a number of photos of them and they play close to the crowd with singer Stephen Lawrie spending a lot of time crouched down or kneeling on the floor. The Telescopes have been around since the late 1980s, though the only original member left is Lawrie. They generally seem to be made up of Lawrie and the members of other bands, in the case of the last LP, Glaswegian band St Deluxe. I am not sure if St Deluxe were among the band tonight, but there was a whole load of them. Six guitarists, plus bass and a drummer. That was a lot of band to set up – there was a long delay… 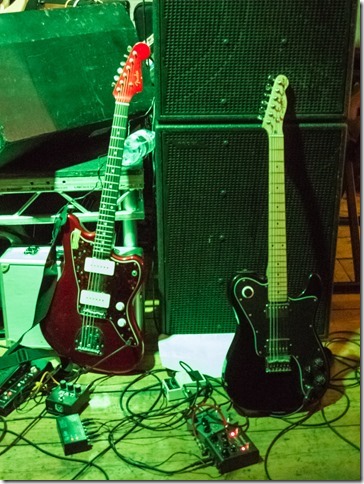 Their set was manic. With over half the band on the floor with the audience – I had a guitarist inches from me for most of the set, it was cramped and loud and apart from some technical difficulties with the bass, pretty awesome. The Telescopes are masters at the art of the droney, psychedelic tune and the first track they played was the first on the new LP – ‘You know the way’, a slow burning, dense track with a hint of menace in the vocals, with six guitars it was awesome ! 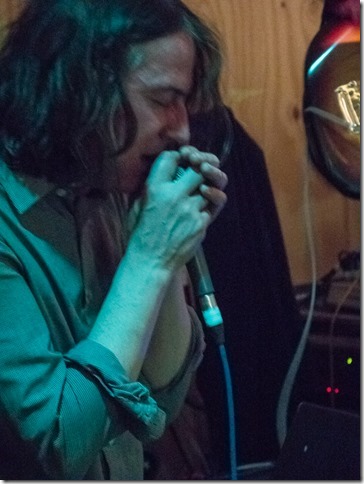 I tried to take photos when I could, it was even darker here than at the stage the New Candy’s were playing on, so photography was difficult to start with and got harder as the crowd started to push once the set was fully under way.

They were really good, I thoroughly enjoyed their set, and would like to see them again, somewhere less full possibly.

As they were so late I left before the end of their set to go and see some of The KVB playing next door, they must have started reasonably on time as I pretty much missed the entire thing, just catching a couple of songs at the end. I was also way down the back so didn’t get any opportunities to take a photo.

I pretty much completely missed Camera as well, only hearing half a song of theirs. But I did get back up to the front at the other stage for the final band of the night 10000 Russos. I was really keen to see them, reminding me a little bit of Loop with vocals from The Fall’s Mark E. Smith.  I really liked them and would definitely go to another gig, shame their last LP is sold out as it would fit nicely in my record collection! 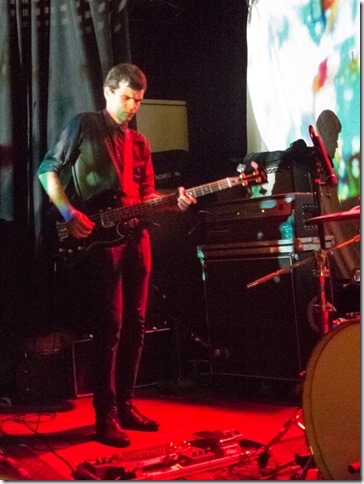 Vocals were provided by the drummer, and I have never seen anyone stick a microphone between the cymbals of a high hat and sing into it before !

Unfortunately I had moved to the back so missed what was a mad end to the show with cymbals being passed around and band members in the crowd.

It was tough to choose, but I think they were my favourite band of the night; but a very close call indeed as New Candys and The Telescopes were brilliant as well.

I enjoyed the gig, it was good to get to a small show again after being to a couple of larger gigs in bigger venues. The sound was good, the venue was good, and the bands I saw were awesome.  I wish I had bought a ticket to the Saturday session as well.

I highly recommend you check out all the bands on Bandcamp or something similar, you never know, you may like it !

One thought on “A noise fest – The Fuzz Club Festival”