Yesterday was such a good day, so we were keen for a repeat today. Breakfast was not served in the hotel until quite late – by our standards, so with the sun shining and a busy day of walking planned we were up and out the door as soon as we were ready. Which wasn’t that early really, those massive nightcaps last night slowed the day down a wee bit. Almost straight out the front door we saw some of Brugge’s famous swans, swanning their way down the canal in the Rozenhoedkaai.

We had a brief walk immediately around the hotel looking for somewhere to eat and nothing seemed to open until 10:00am (they are missing a trick here) so we ended up going back to the hotel for a really nice breakfast, that came with a glass off bubbles… Yep, a good start to the day!

I had consulted the guidebook over breakfast and came up with a bit of a plan for the morning. There are lots of things to see in Brugge and I wanted to fit as much in as possible as we had a full day to do it. With tomorrow being a Monday I had in mind visiting some of the really popular touristy things then and avoiding them as much as possible today, so today was a walking day.

Our first stop was Sint Annakerk, which was up one of the ubiquitous canals. Walking along the canal was interesting enough as it was. It was made much more enjoyable as the only sounds were Sunday morning church bells, one was ringing ‘Ode to Joy’ and the occasional rumble of tyres on the cobblestones. It was very peaceful.

Excuse the lens flair. Not supposed to be photographically correct, but I do love a bit of flair!

Sint-Annekerk was built in 1624 and is quite lovely on a sunny Sunday morning.

The Jerusalem Church was my favourite in Brugge, and has the best story, as well as a wonderful wooden cupola at the top. The church was constructed in the mid 15th century by the Adornes family, and is one of two privately owned churches in the city. The Adornes family came to Brugge after the father had been on a holy pilgrimage to Jerusalem. The church is modelled on the Church of the Holy Sepulchre in that city and unlike most ancient churches is unchanged since it was first built. Most have been renovated and modified since their first construction. Anselm Adornes, who finished the church his father started, was murdered in Scotland while on a diplomatic mission and while he was buried in Scotland his heart was brought home and interred here. It is a lovely building and it was a shame we could not go inside – it being a Sunday.

I also liked the square outside. You can see how so few people make it this far from tourism central, they do get to miss out on some good things!

The church and square were just inside one the edges of the city, and on one of the main entry and exit points. Each of these are guarded by large gates, with bridges over the canal. This is the Kruispoort Gate and this version was constructed in 1400, after the first two had been destroyed in previous wars. This was the gate used by both the armies of Napoleon and Adolf Hitler when they first entered Brugge after invading Belgium. I really wish I had gone across the bridge to photograph it from the far side, but it was up to let some boats pass through.

One thing I remembered from my last visit to Brugge in 1987 was that there were windmills, and I wanted to see those again today. Luckily (it was actually down to good planning) the four remaining windmills are all located just up the canal from the gate.

The first windmill we came across was Bonne Chieremolen from 1844. 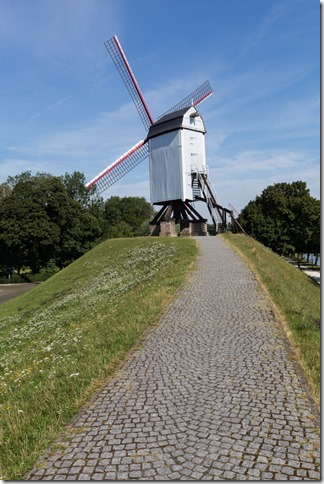 The second is the most famous of the windmills, the Sint-Janshuismolen built in 1770 and it is still working today. 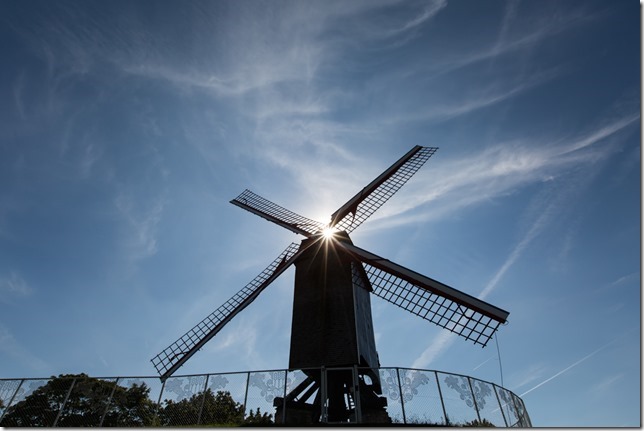 The third was my favourite, De Nieuwe Pappegai which was rebuilt in 1970, 200 years after its neighbour! 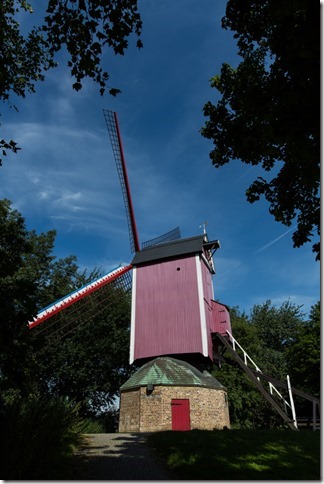 And finally Koeleweimolen De Coelewey which was built in 1765, but moved from its original location.

I loved the windmills, a shame all 29 of the original mills are not here to be seen! They do make for great silhouettes on a sunny day. Just past the last windmill the main canal that runs up one side of Brugge connects with the Langerei canal which heads back into town. We followed this wonderful waterway, surrounded by some beautiful old buildings back into the centre of Brugge. 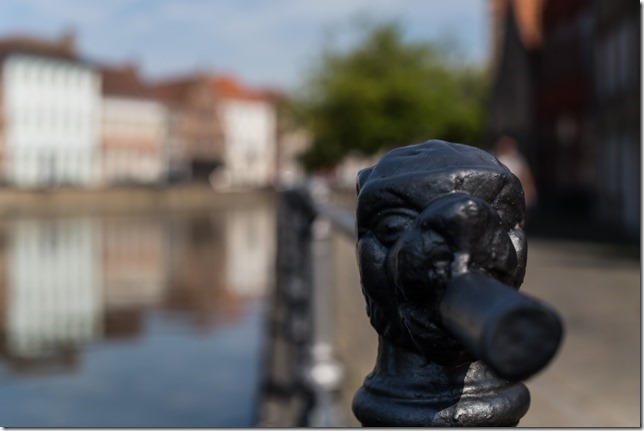 There are a lot more buildings with icons above entrances and on corners. 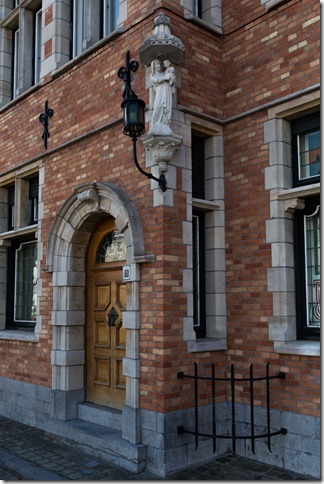 Closer to town we crossed over the canal and walked down a smaller, more residential canal – so reminiscent of Venice. 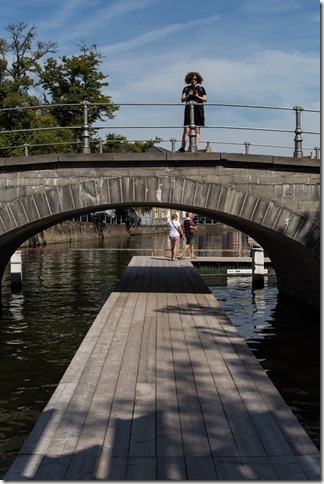 I wonder how long the buildings will last, like Venice and other canalside towns, the water erosion on these foundations and walls, that must be hundreds of years old, must be taking its toll. 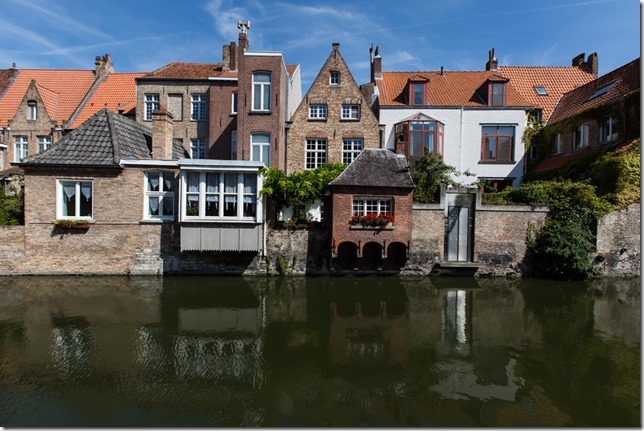 I loved this apple tree growing in someone’s garden. A reminder that this is a living breathing town, where people live normal lives. It is not just a museum piece. 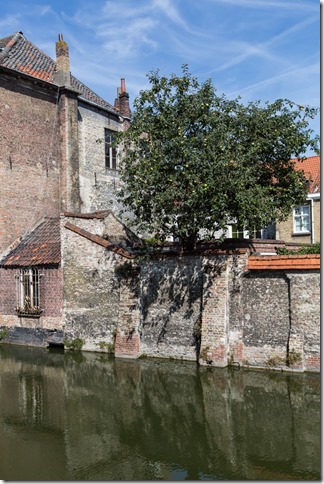 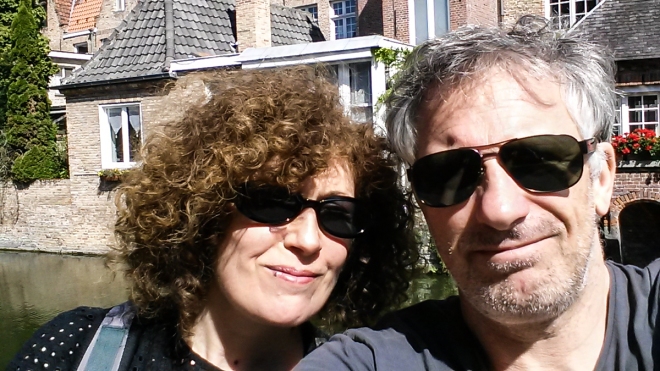 The city centre was heaving with people, after an hour of meandering slowly down the canal bank it was a shame to be back into the throng – inevitable, but still a shame. It was a good place to find a cafe for a much needed sit down, a cup of coffee and some gooey pastries. After the breakfast we had at the hotel we didn’t really need a big lunch!

On the way to the Beguinage we passed the entrance to the oldest alms houses in Brugge, we should have stopped in hindsight, but it was on a very busy shopping street and these things always make me want to run and hide. The entrance was lovely – and very old.

The Beguinage is entered through a gate built in 1776 and features the image of Elizabeth of Hungary who is the patron saint of Beguinages.

From Wikipedia – “The word béguinage is a French term that refers to a semi-monastic community of women called Beguines, religious women who sought to serve God without retiring from the world.” The beguinage in Brugge is named “The Vineyard”, as this was what the land was prior and it was started in 1244, perhaps by widows left when their husbands were killed during the crusades and they needed a place of safety and comfort. The buildings that make up this peaceful enclave were mainly built between the early 1500s and the 1700s. Given its location it was remarkably quiet and deserted across the bridge. It is now a Benedictine convent. 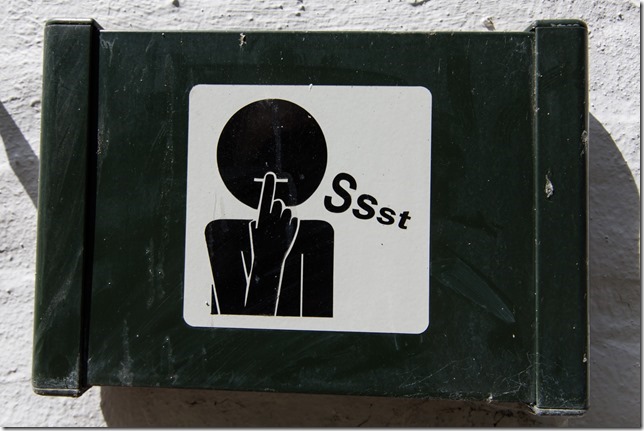 I initially thought the huts in the trees were places where people went to contemplate, or to live a particular vow. But when researching for information when I was writing this post I discovered they are an art installation by the Japanese artist Tadashi Kawamata and are part of the Brugge Triennial.

From the beguinage we popped out on to the edge of Love Lake, which was our final planned destination for the afternoon. We walked around the edge of the small lake and then popped into the run down bar on the far side for a drink and a relax.

Later in the afternoon, my football team, Arsenal are playing Chelsea in the Community Shield, a pre-season “friendly”, not that there is such a thing when we play Chelsea. I took this as a sign of good fortune. Not having the game on TV here, was probably a good thing. We did win it too, Yay 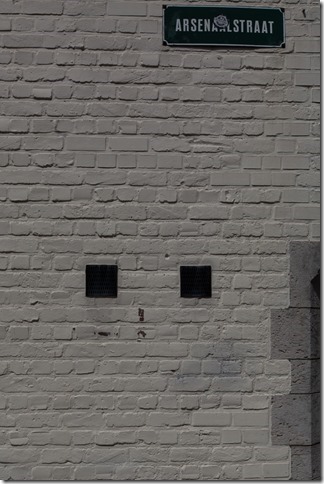 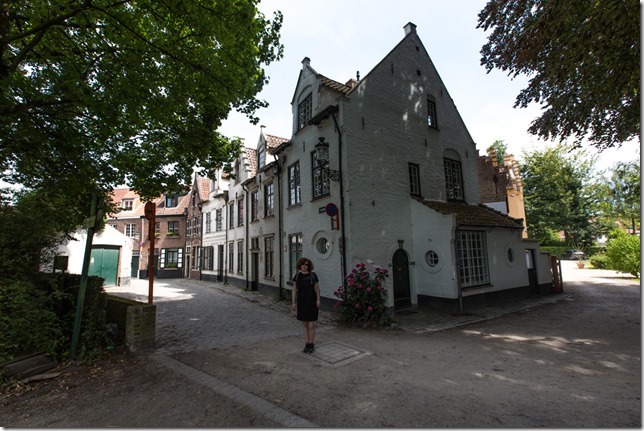 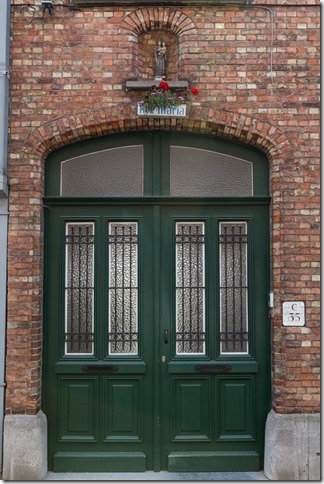 There are quite a few alms houses in Brugge, most of them extremely old.

We went back to the hotel for a rest, and another large glass of bubbles in the garden while we consulted the guide book for some ideas for the rest of the day. 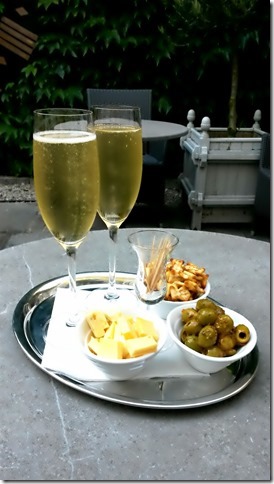 We decided on a visit to the Groeninge Museum, which is an art gallery showing only Flemish painters and others who came to paint or resided in Brugge. The museum is not directly on the street so there were a few interesting things to see just to get to the museum itself. 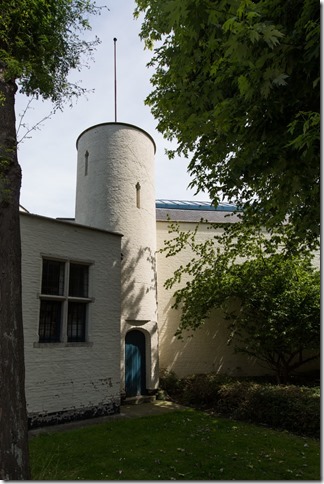 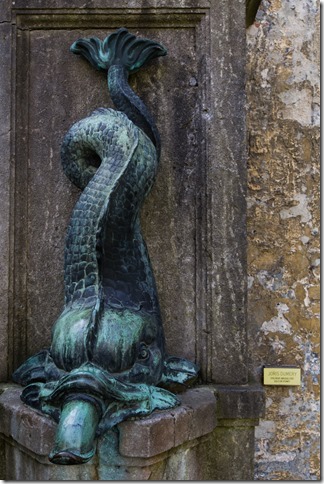 The museum was interesting, it is in a lovely light and airy building and is nice and quiet. There are some really nice pieces from local artists like Jan Van Eyck and Gerard David. I mostly wanted to see a famous Hieronymus Bosch piece but it was not on display sadly. There was a very cool Rene Magritte – ‘The attendant’.

I also liked this piece from the Brugge town hall building from the late 1300’s. 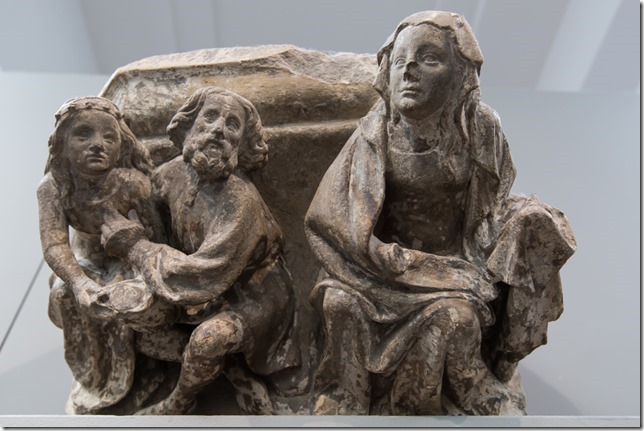 After the museum we headed off to find a beer bar, Staminee de Garre, which had been recommended to us by some friends. We walked through the Burg, passed the lovely old town hall building, though none of my photos were post-worthy.  I do love the letter boxes which I cut into the walls of the houses – or the town hall in this case.

After a bit of map reading we found de Garre, which is hidden away down a small alley way.

The place is small, and old and a bit rickety and seemed to be evenly populated with local regulars and tourists. All the tables were taken so we were about to head out when the barmaid moved a few people out of the way and found us a spot on a table with a couple of Americans and a local guy. We were given a very extensive beer menu to choose from. I was about to choose a trappist ale, when a Belgian guy at the next table told me to try the Garre, which was the beer brewed for the bar. A wise choice ! El is not a beer drinker at all, but tried one of the fruit flavoured beers – Raspberry in this case. She didn’t mind it, but I don’t think she will become a real ale drinker any time soon. After the Garre I tied a trappist ale from the Rochefort Abbey. Trappist beers are brewed in abbeys, there are 11 abbeys in Europe certified as trappist breweries. I thought the 6 was representative of the alcohol percentage – and this was the lowest in the range, but it wasn’t, this one was 7.5%. It was very nice too! One of the features of Belgian beer, is that they all have a special glass, shaped for the style of beer, with a few hundred beers on the menu, the glass selection must be massive. There was only one barmaid for this small but busy bar and she was like a machine, clearing tables, selecting glasses and bottles and pouring the correct way for the type of drink chosen. Made my life as a barman seem very easy ! 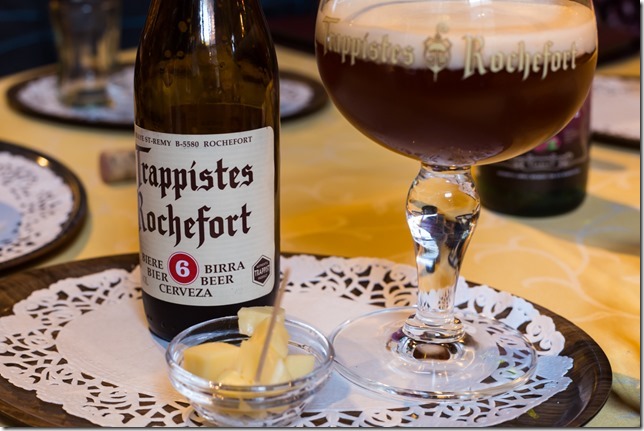 We left soon after in the search for somewhere nice to eat dinner as we had not really eaten anything much since breakfast. After a while walking around we ended up in a bit of a tourist restaurant near the hotel. It was nice and not overly expensive but not as good as Est.

As we were wandering around looking for eating places we came across some salsa dancing in the old fish market. It was hugely popular with a lot of people watching on from the side.

And that was the end of day two. A lot of walking, a tiring but very enjoyable day out. Brugge just gets better the more I see of it, and we saw a lot today.