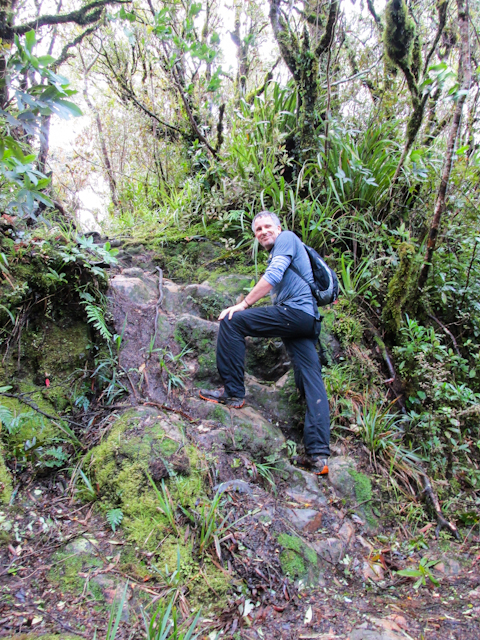 When I decided I should visit New Zealand a couple of weeks ago I also decided that I would try and squeeze one day of adventure into a very tight time frame. This is not something I would ever normally say, but I was sort of sick of the Waitakeres, so I was looking for somewhere I would not normally go to. I floated a couple of ideas over my friend Vicki, and as she was not working today we decided to head south east and walk/run or ride the Karangahake Gorge. I love K Gorge, I did not go there that often when I lived in New Zealand, so it is always fresh. It has a nice mix of rock strewn stream, native bush and some ruins left over from New Zealand’s ‘historic’ mining past, so is great for walking, riding and photography – all things I love.

That was the plan anyway. Once I arrived in NZ I discovered that I could not find any of my riding or running gear, except my bike and my trail shoes. The plan was then changed to walk K. Gorge and explore the open tunnel networks, I did find my head torch – bonus !

That was the plan anyway…. On the way down, Vicki floated the idea of doing Mt Te Aroha instead, as it was a similar distance away. She had never been up it before, though most of our running buddies had. I suspect that that was her plan all along, knowing I would agree very quickly – and she was right. I had been here once years ago and had ridden some newly open mountain bike trails in the lower slopes of the hill so was keen to revisit, and head to the summit.

Mt Te Aroha sits at the far southern end of the Kaimai Ranges, where the hills meet the Hauraki Plains, it does look quite bizarre, shooting up so abruptly from the flat expanse below. Sadly the top of the hill and its mast was obscured by the clouds.

We drove down to the small Te Aroha town-ship and parked just outside the domain area, the walking and mountain biking trails are quite clearly marked though I had to ask someone where the trail to the summit started. It was quite a windy day and we were advised it would be very windy and cold at the top.

As the sign says the hill is 950 metres high, but what it does not tell you is that the trail is just over 4 kms long… That makes the walk quite steep ! 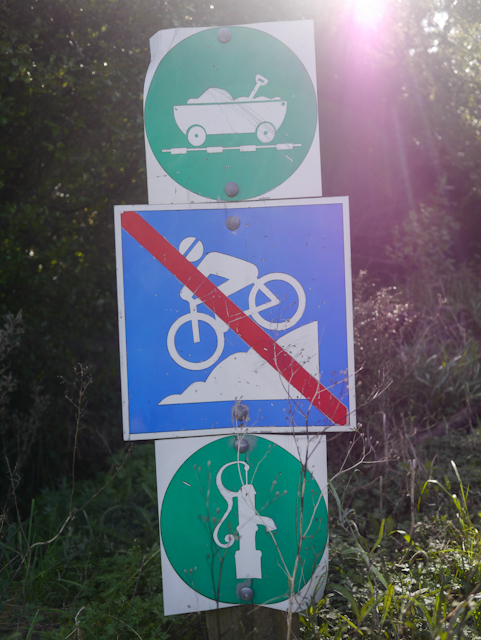 The trail started off with a fairly gentle gradient, and it was warm under the trees as well We soon reached a reasonable height and the view over the planes was long and reasonably clear. We could feel the wind a little bit on this side of the hill, and as we were standing taking photos of this rainbow a rain squall past round the side of the hill, we could see it but not feel it , and we stayed perfectly dry. 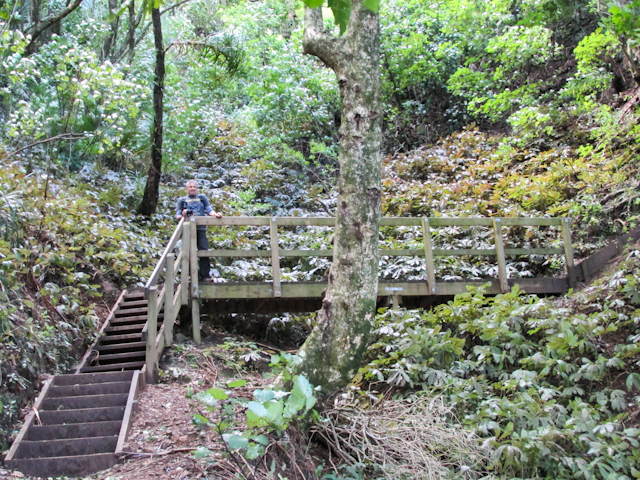 Vicki is the New Zealand editor for a trail running magazine and was looking for some action shots for a trail review, not that we were really running anywhere – especially up hill, I am way too unfit at the moment and long pants are not really conducive to running. Where ever there was an opportunity to grab a couple of actions shots we did – I used the opportunity to take a rest!

As we got further up the hill, the gradient got steeper and steeper and as we drifted further round the hill the wind got stronger and stronger. We were a little nervous of some of the large trees that were creaking very loudly – and with the amount of trail litter – including some quite large branches, it was a well founded nervousness. There was also another rain squall that blew past by the side of the hill, but again we were sheltered from the worst of it.

The only bloke walking up Mt Te Aroha in an old Ramones t-shirt 🙂 (Tommy Ramone, the last remaining original member of the Ramones, passed away last night)

As we approached the summit we could hear a roar overhead, it was incredibly loud and sounded like a jet engined plane just sitting above the top of the trees – though we could clearly see there was nothing there – intriguing! Just before the final push to the top there was a small ridge where there were no trees to provide shelter from the wind, as it was so strong we ended up sort of half crawling half stumbling across to avoid getting blown off the top – or that is what it felt like anyway.

Naturally the last section was steep! My legs were pretty shot by this stage and I was glad to stop and take photos every now and then, and even gladder to get to the top.

Wow ! The wind was incredible on the summit, and we found what was making all the noise, the wind through the mast was just incredibly loud. You can see how strong the wind was, not often you see hurricane fencing blown over. It was a lot colder on the top, though it was cloudy up there it was not really wet, though we put coats on for the wind.

We took turns taking photos at the trig, we were both hanging on in the fear of being blown over – I have never ever felt wind that strong before, it was incredible – and it had calmed down a bit from the previous days as well. 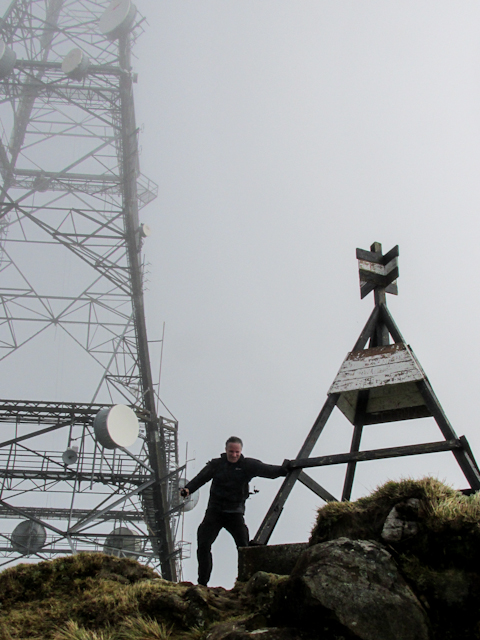 I think this advice should have been posted at the start of the trail, given today’s conditions!

We did not stay long on the top before heading back down into the relative shelter of the trees were we took a snack as we started on the way back down. As we were reasonably high the trees were very different to what we get in the Waitakeres, short scrubby trees covered in ferns and moss, it was a lovely section of bush and I have failed to capture it very well sadly. 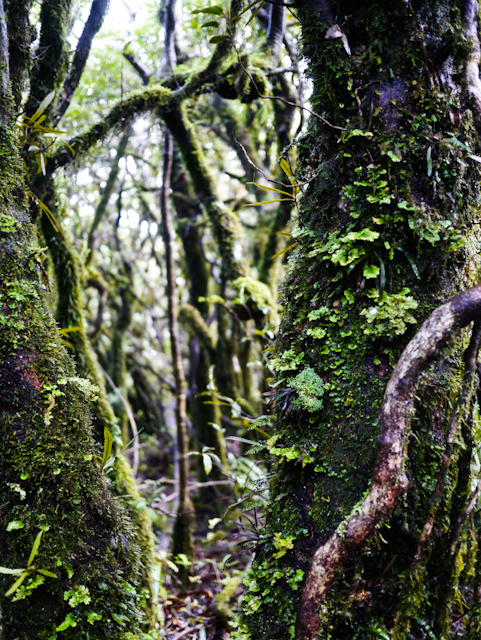 Once we were clear of the steep, rocky, rooty, slippery section closer to the top I managed to break into a light jog for most of the rest of the way down to the bottom. Needless to say it was a short trip back down ! I slipped over once on the way down, my leading foot hit a large leaf and shot out in front of me, over extending my leg. I had a small flash of pain and really thought I had pulled my groin muscle. There was a nervous limp for a while, but it soon worked its way out, much to my relief. 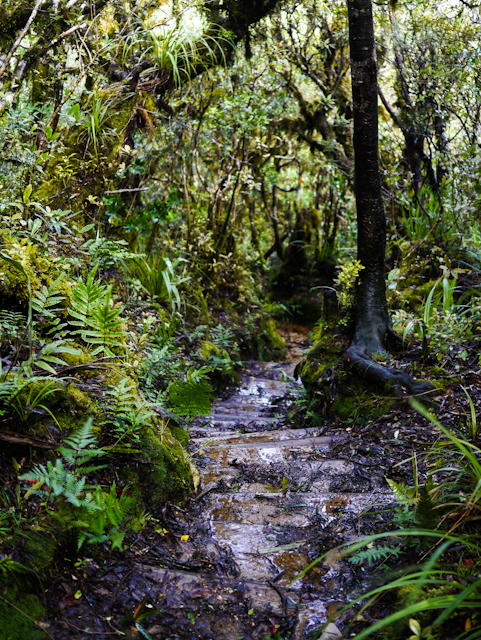 I felt good after the walk, and only seized up a little on the drive back to Auckland. The next three days however….. lets say I avoided walking down steps!

We were lucky with the weather, a couple of strong squalls passed us by on the hill, but we managed to stay dry both times. It was drizzling as we walked back to the car, but stopped as we did a quick change into some clean clothes on the road side. In the domain there is a thermal spa and some thermal swimming pools, with naturally heated water. If we had known we were coming here before we left Auckland I would have brought some swimming gear and dropped into a pool after the run to soak the legs. 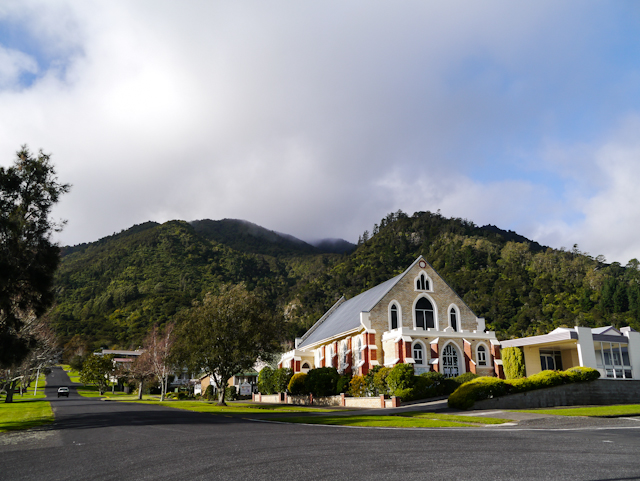 I am so glad we did Mt Te Aroha rather than Karangahake Gorge. The gorge would have been fun, but Te Aroha was an adventure, a microadventure, especially in that wind ! Thanks Vicki 🙂

I bought the book ‘Microadventures‘ by Alistair Humphreys to read on the plane and to get some adventure ideas for when I get back to London, a great read so far.