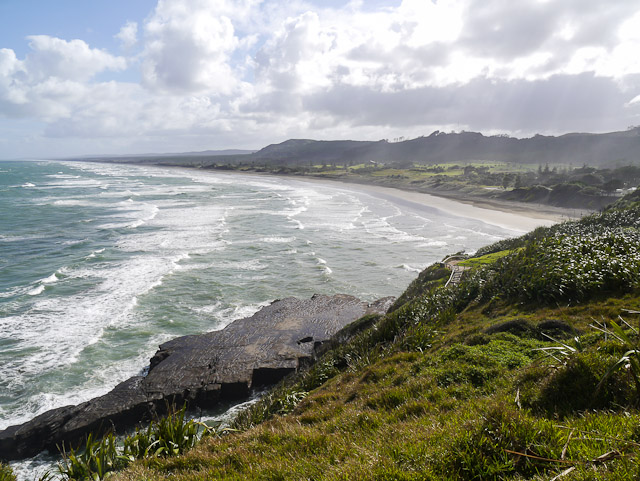 I have been in New Zealand for just over two weeks now and have five days left before I leave for Sydney and onwards to London. It has been great to spend some time with my family and friends and I have had some very special moments with them. I have not been able to see one of my sisters as time and cost have made it impractical which is a shame. Tonight I pick up my oldest son from the airport and I am really looking forward to that.

I have been pretty busy the past couple of weeks, loads of dinners and lunches – with far too many wines and lovely micro-brewery beer to go with them. Luckily I have managed to squeeze in a bit of exercise or I would be forced to buy clothes a size or two larger!

I started off with a nice, but windy, walk to Muriwai Beach with my mum, I love the west coast beaches of Auckland and Muriwai is very special to my family as dad’s ashes were scattered here on this cliff top in 2007, it is one of my beloved spots.

The cliff here is famous for its gannet colony, but it was not the right season for them this time round, I have visited and photographed the gannets and the area on numerous occasions in the past and have some great images.

I had a couple of mountain bike rides. One of my best friends and my riding buddy has been storing my old DMR single speed, I love this bike but it is hard work now after so little riding. Our first ride was at Woodhill, the local pine forest and bike park. I have been riding here for many years and the forest is now being logged with some of my favourite old trails long gone. It was great to see ‘no brakes’ a trail I built over a week in both 2004 and 2005 is still there and still riding well. Sadly my fitness level meant I actually had to get off and walk a small section – embarrassing to say the least. Luckily no-one was around to see.

The following week we took a trip down to Rotorua for some superb riding in the forest there. Again this is a working pine forest and a number of trails have had the trees logged from around them, but in the case of ‘Be rude not to’ the trail was still rideable – and still wickedly fast. Not for me though, I had no confidence at all and nana’d the whole trail. 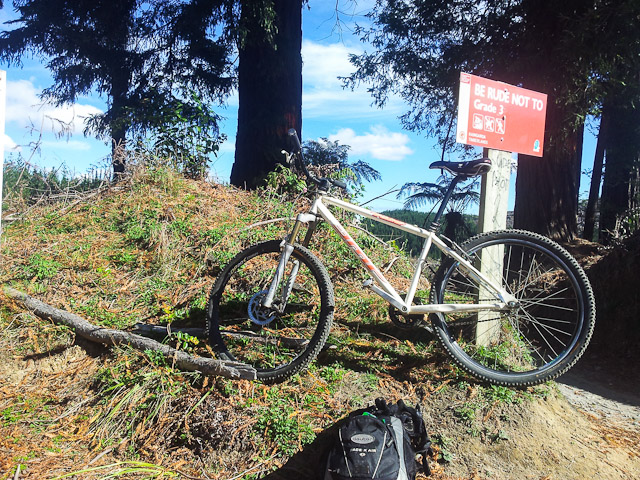 I also managed to get a few trail runs in which was fantastic. I had a great little run up through the hills from Huia dam, short and sweet and at an hour long, enough for my first run for ages. It was great to catch up with my Vicki, a great friend and my best running buddy, to hit some trails and get fifteen months worth of nattering caught up on.

My next run was to take some photos with the Neary family out on the trails around Piha, it was a lot of fun running with Steve and his two young daughters and I have never heard so much giggling on a trail run before. Sadly the weather was not playing ball so we did not get to go out to the beach side blow hole for some photos. I love the trails around Piha especially Kite Kite Falls.

A few days later I ran the Okura walkway on Auckland’s north east coast. The trail has changed significantly since I left and is now gravelled the whole way. It was an easier run, but much less fun without all the mud. The view from the hill down the coast was great and worth puffing and panting up the climb.

And of course it rained !

Luckily just at the end and we didn’t get too wet. 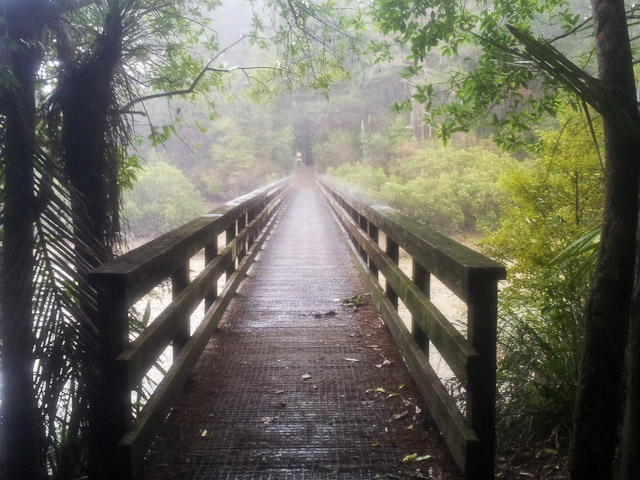 My final run last weekend was again at Piha – up and over Piha Valley Track and down the ridge to Garden Rd. I just love the tracks here. Vicki and I were joined my Mal, who I supported on his epic Coast Path Run in England in June last year. It was great to hit some trails with Mal again and I look forward to hearing about his next big adventure….

Yep, you guessed it, it rained…

As well as the more active things I have been a wee bit cultural, after a great lunch with friends on Anzac day I visited the Auckland Museum and for the first time in ages had a good walk around the newly renovated Maori section which I thoroughly enjoyed. 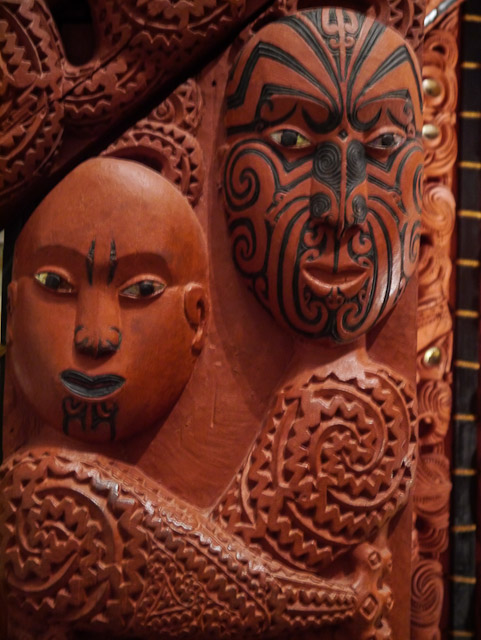 As it was a day ending in the letter Y it rained again on ANZAC day, just as I was out of my car in the middle of the road taking a photo of the poppy installation on Titirangi roundabout that was commemorating ANZAC day. 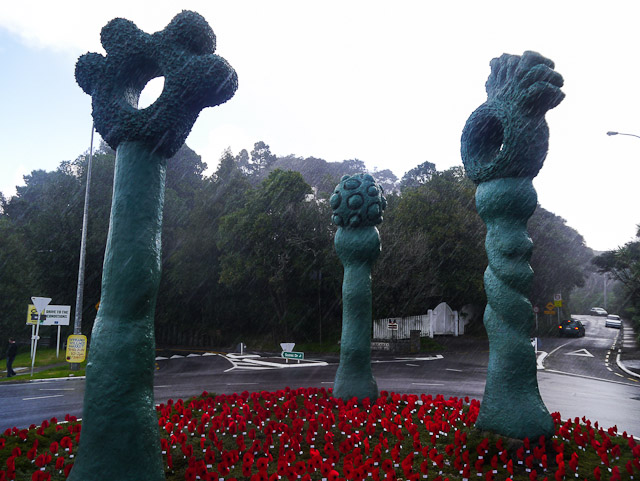 I also took a trip to the Auckland Art Gallery, but the section I wanted to see was closed while preparations were made for an up coming exhibition. However, I did see one my favourite NZ paintings – Robin White’s ‘fish and chips, Maketu’. I love this picture and ended up buying a cheap print for my wall back in London. 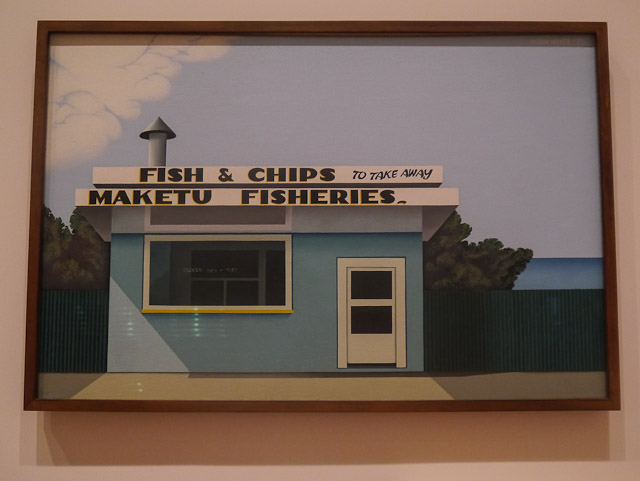 For a change it was sunny all day so I parked down on Auckland’s waterfront and walked back into the city.

I was surprised to found a small spirit house in a park leading up to Symonds Street which was really nice, something new and something showing the real diversity of Auckland city.

After the gallery visit and lunch with Donelle I walked back down to my car and drove along Tamaki Drive, it has to be one of the most stunning inner city roads in the world. I then sat and had a wine in a bar and enjoyed the sun and warmth and the view over Rangitoto Island.

Last Sunday I visited the All Fresco Street Art Festival on K’ Rd with a really old friend Katharina. There was some great stuff happening and it was really cool to see some art in action especially in what has appeared to become a bit of soulless city. I will blog it separately, but for a time as usual – it rained…

We did find this cool box of what looks to be rubbish outside a shop on K’Rd. Katharina had recently done a photographic exhibition based around a mannequin factory so we stopped for a few shots.

I have also had a good session going through the stuff I have stored in NZ, surprisingly I only tossed a small amount out, but I did get to move it from a storage unit into my brother in laws spare room, which is great. I still have more stuff than I thought ! Though most of those boxes seem to say books or photos, so it is not all bad.

The most important thing to be done was to pay a visit to my record collection that my nephew looked after until he went away to university at the start of this year. It was a special reunion and I also got to see the records I have bought on-line while I was away that were sent directly to my sisters house, and even play one on my turntable.

And that was pretty much the first few days of my time in New Zealand.

2 thoughts on “Two weeks (or so) In New Zealand”