I had a far better sleep, but still felt shattered when I woke. I was up earlier than the day before but faffed for a bit in the morning, got some washing done and semi-packed for my departure in the afternoon, basically I did sod all.

I took a tuk-tuk back to the Pettah market area and this time declined the day tour. My first stop was the Colombo Fort train station, this is the main station for Colombo.

I collected the ticket I had booked on line for this afternoon’s journey to Anuradhupara as I didn’t want to put pressure on myself trying to organise ticket collection while carrying my pack and day bag – especially in this heat. I then walked around Pettah for an hour or so, but really didn’t see much that was photo worthy, or that I felt comfortable shooting. I have seen lots of Asian market places selling shoes, bags, cheap clothes, cell phones and plastic stuff so a wee bit jaded by it all. I did like this section, which I have dubbed ‘speaker corner’.

I decided to do the stupid thing given it was hot and sunny, and walk the five or so km’s back to the apartment. I could do with the exercise, it has been too long and I am getting way too saggy… I had made it out of town and was walking along Galle Face when I was approached by a man who told me he was teacher in the monastery I visited yesterday. He had very good English so we chatted amiably as we walked, before taking a tuk-tuk back to the monastery where I had a better look around and was shown a Buddha in a tree which I do really like. Of course I had to give him a tip, and only had the equivalent of $10NZD so left feeling a bit ripped off. A lesson learned – keep small bills at all times. Which is harder said than done ! 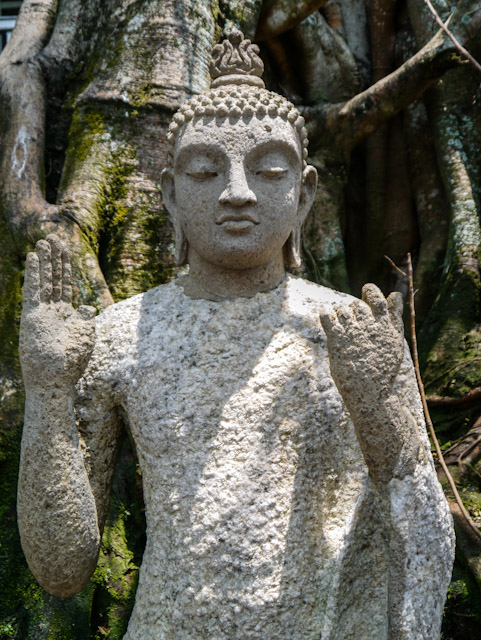 I mooched over lunch back at Trudy’s and had a wee doze before getting another tuk-tuk back to the station for my train. I was quite early so I picked up a sim card and some mobile data before I boarded.

I have gone with Expo-rail, which I think is a private company that tack their own carriage on the end of the main train. It is about double the price of first class, but still ridiculously cheap and I thought that for my first train ride in Sri Lanka I would travel in style.

Once on board the stewards provided us passengers with warm towels, mints and water as we departed Colombo Fort Station on time. I made an attempt to write some blog as we went through some of the flat farm land on the edge of the city but the train was rocking and rolling all over the place and it proved to be too difficult, and really I should be looking out the window anyway ! The carriage is facing backwards though which is a real shame, it is supposed to be safer that way, but I always like to see what is coming up!

I met a German guy, Benne on the platform and we chatted for a part of the way to Anuradhapura, he is staying in a different place to me and we tentatively arranged to meet up tomorrow. The journey was quite bouncy and there was not a whole load of interesting things to look at outside, the windows were too grubby to photograph through, which was expected, yet disappointing. It rained really heavily at dusk and by 6:30pm it was too dark to see much outside so I tried to doze for a bit before dinner was served. I had requested a vegetarian meal but ended up with rice and beef, oh well. I ate some of it but was not particularly hungry anyway, though it was most adequate. We finally arrived thirty minutes late at 8:45pm. After crossing under the tracks to exit the station I grabbed a taxi to my hostel, had a beer and posted a blog and went to bed – tired… 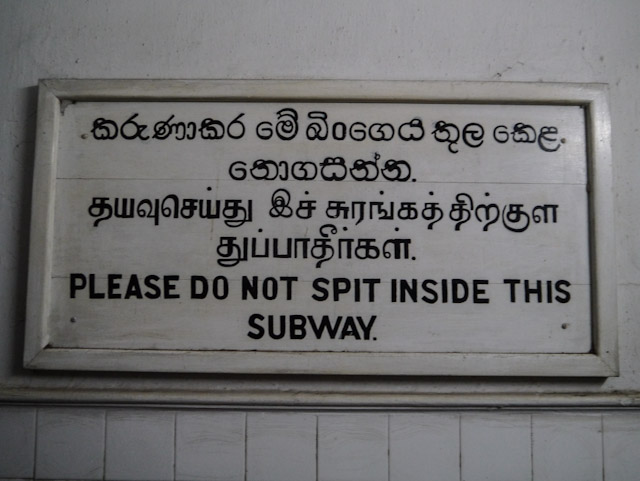 I am glad to be back on the road again, interested to see how it will all go, today was a good day though and at least I know there are other tourists in town !