Damn it, I knew this would happen! The night before last I managed to get about three days worth of sleep in one go, so I had to make up for it last night by having none, not a second. So frustrating as I am back to being tired all over again. As well as my body clock suffering from the jet lag of being five half hours out of whack with London it was also a warm and very noisy night. Though they are not supposed to be working at night, there was concrete drilling going on at the construction site next door at 1:30 am and then grinding at 3:00. I was not a happy chappy when I did get up.

Though I did make the most of the day and was out the door by 9:00, I was going to get a tuk-tuk into the Fort area of Colombo and then walk up to the Pettah district to look around the markets. As with most tuk-tuk drivers any opportunity to open a conversation is a potential business opportunity and my driver, Lateef took the chance to offer me a two hour tour of Colombo for the princely sum of $30NZD, I found this remarkably funny and we eventually agreed on half that…. 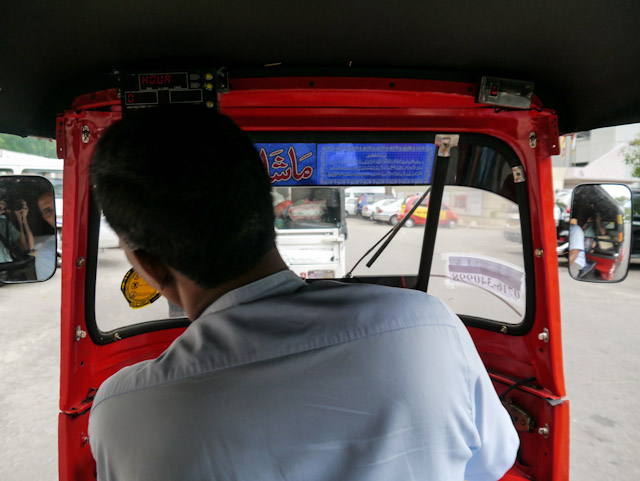 It was worth it as I did get to see quite a few things I would not have seen on foot, plus he knew a bit about some of the history so that made it all the more worthwhile.

It appears that all developing countries have to have some Bob Marley and Che Guevara stickers and posters around the place ! 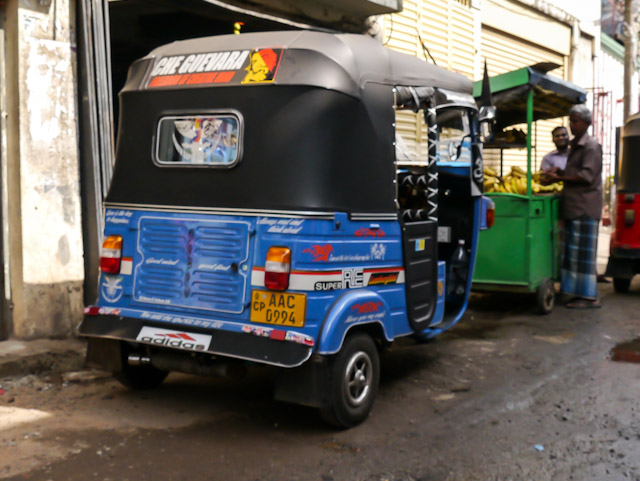 We first visited some of the old and not so old Hindu temples, or kovils in the local Sinhalese language. Both the new Kathiresan and the old Kathiresan Kovil are on the same street. It was enjoyable cruising up these noisy and crowded streets in a tuk-tuk, I am sure I have said it before in what now seem to be posts from so long ago, about how much I enjoy travelling by tuk-tuk.

Our next stop was this catholic church and for the life of me I cannot remember what it was called, but like the Hindu temples it was busy with worshippers rushing in an out and beggars of all ages, shapes and ailments crowding the footpaths and entranceways.

We next visited Sri Ponnambalam Vanesar Kovil one of the key temples in Colombo. The temple is unusual in that it is built from granite slabs and is unpainted, inside and out. Inside is wonderful, but no photos were allowed. Blessing with milk is carried out here so there were a number of cows in the grounds as well as two bullocks used for work. As we were in the temple grounds we were barefoot, I really needed to be careful of the puddles. 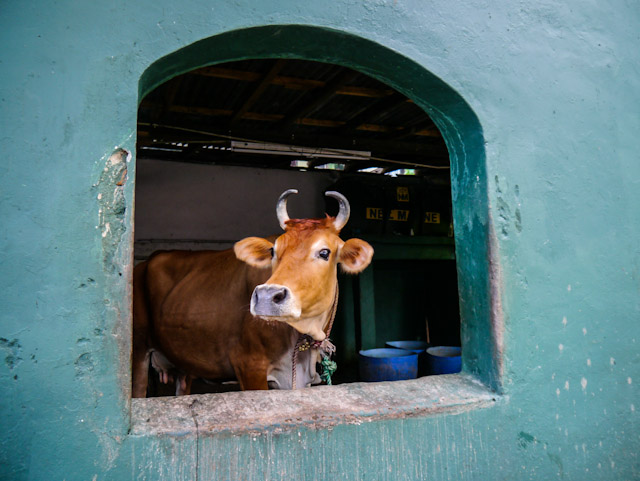 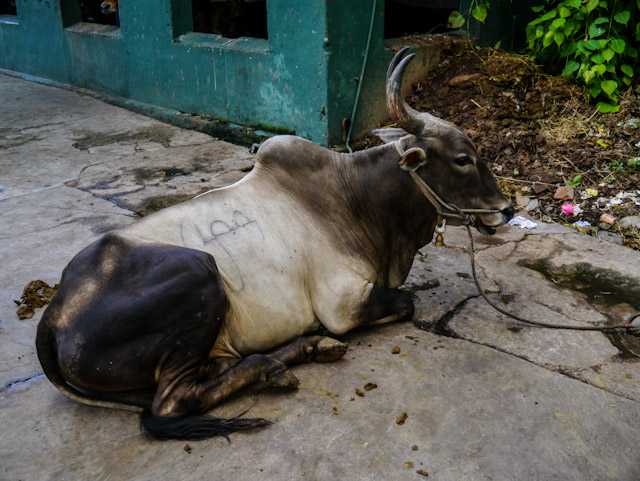 We next visited Wolvendaal Church built by the Dutch in 1749. It is a large but simple church and I quite liked it. Sadly my camera battery died when I arrived and the spare I recalled was sitting on the floor in my room at Trudy’s place. Damn ! Luckily I could use my phone for a few basic shots. 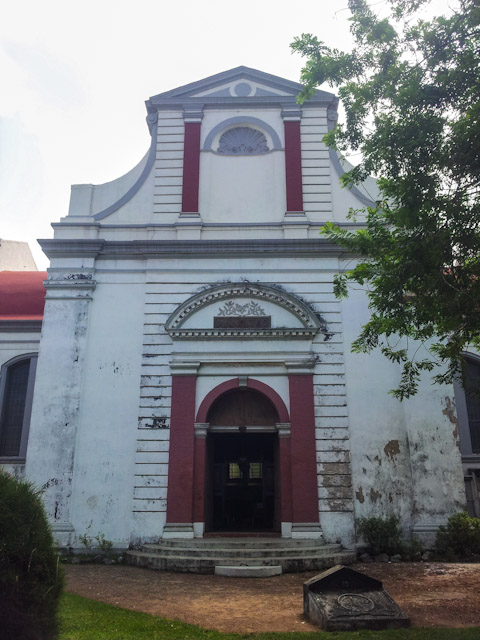 I was given a tour of the church by one of the staff, there are five gravestones inside were the bodies of the families of the first five governors were buried. The skull and cross bones mean they died of disease and were not to be dug up. 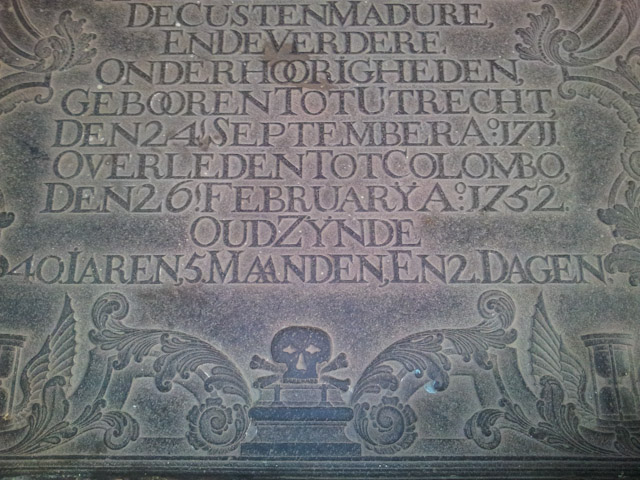 The church is sighted on the highest point of a largely flat Colombo and could be clearly seen from the harbour entrance when ships arrived. After full independence in 1948 a Buddhist stupa was built between it and the harbour entrance so this was the first religious symbol seen by arriving sailors. Sri Lanka is largely Buddhist.

We next visited the food market and had a walk through the fruit section, I was given a few of the twenty four banana varieties to sample as we walked through a banana house.

On the way out we passed the very fresh chicken section – choose your own !

That was pretty much the end of the tour so it was back to the apartment for a lie down and some lunch before heading back out for a walk round Victoria Gardens to the National Museum.

I really enjoyed the museum, though I didn’t like having to pay an extra camera fee, especially given how poorly lit it was inside, but hopefully the money goes to the museums upkeep so I cannot complain.

I did like some of the Buddhas, especially this sandstone one from the 9th century. If you have followed some of earlier travels through SE Asia you will know how much I love the symbols and statutory of Buddhism.

There were some very good carvings of some of the Bodhisattva as well, many well over 1200 years old. 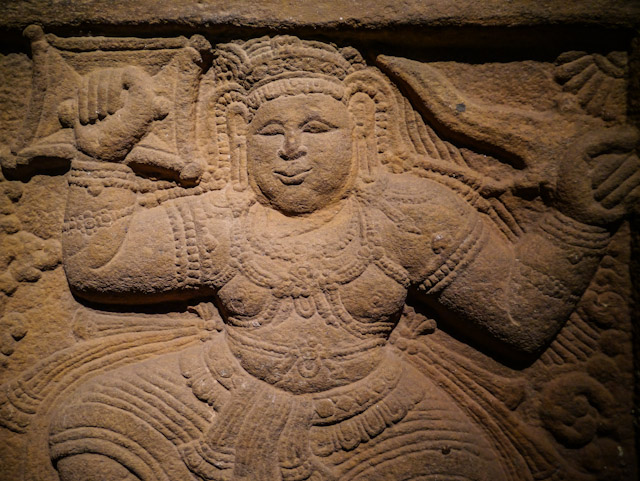 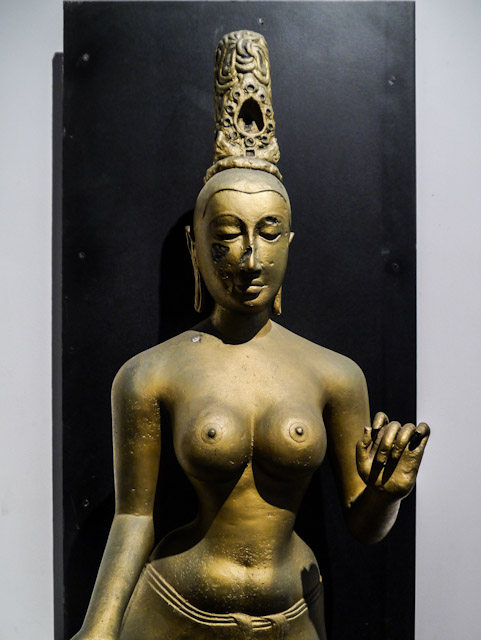 In the museum grounds there was a good example of the vine covered trees that are all over Colombo, many filling round abouts. I really like them and something I miss from SE Asia. My tree photography is somewhat lacking so I have not captured this wonderful living thing as well as it deserves.

On the way out of the museum I grabbed a couple of samosas from a street vendor and munched them on the way through Victoria Park, which seems to be completely under construction at the moment. Trudy told me that CHOGM (Commonwealth Heads of government meeting) is here in November so the place is getting tarted up – at great expense to a poor nation : (

I also passed by this roundabout temple – where devotees have to brave the seemingly constant traffic – except for the second I clicked the shutter !

Back at Trudy’s I spent thirty minutes doing laps of the pool to cool down. There was no sun shining on the pool as it is between the two apartment blocks so it was extremely refreshing. 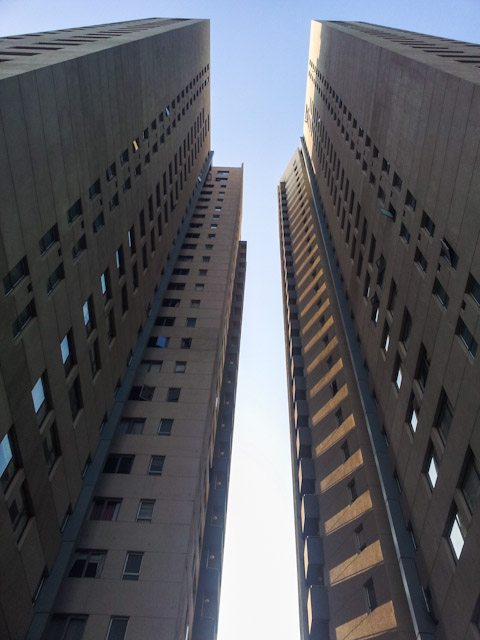 2 thoughts on “A tuk-tuk tour of Colombo”