Today was supposed to begin at 6:00 am, but thankfully last night this was delayed until 9:00, and thankfully again I was told before I had gone to sleep; I removed the alarm I had set on my phone. I was up before breakfast at 8:00 and managed to get a hot shower in before the power went off. I was feeling pretty good considering a lack of sleep – and the vodka tonics we were drinking were not exactly made with top class vodka.

I went for a quick walk out of the camp and got a photo of the guys making the rolleggs that some had for breakfast and I had for a late snack last night. They are pretty damn good. 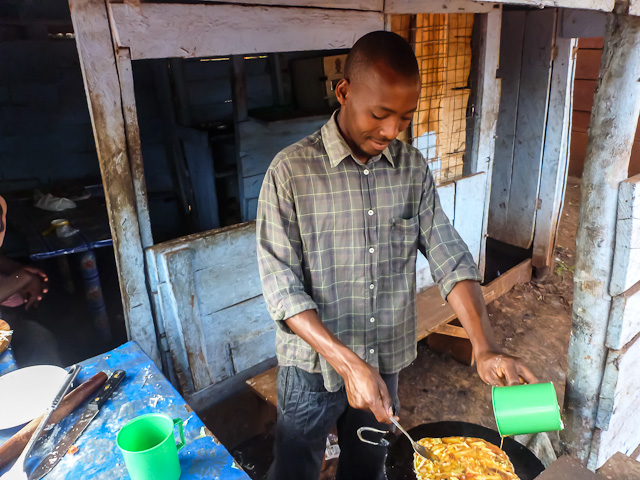 I also loved this tree right outside the campground gate.

As we left the village we all spotted this sign on one of the buildings, I hadn’t seen it before. Apparently it is to remind people to get to work on time !

We were on the road on time and made good progress into Kampala – the capital city of Uganda. We were expecting congestion but had not counted on the Kampala Marathon being run that day and the main streets were clogged solid. It was a long wait in fairly humid conditions – luckily there was just enough breeze to make it not too uncomfortable. 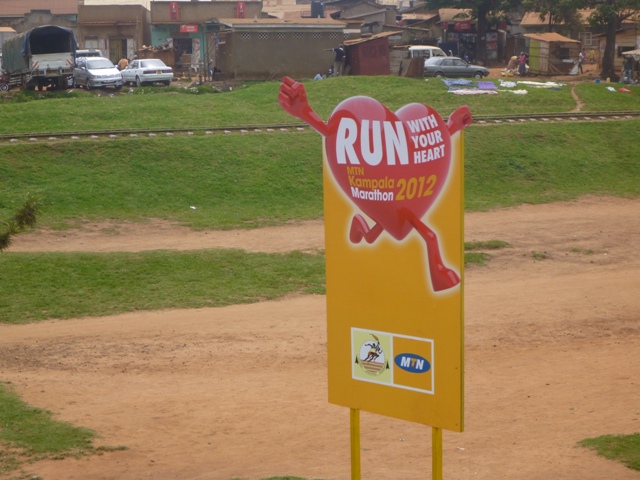 We only just made it through the city to the shore of Lake Victoria at Entebbe. The last boat to Ngamba Chimpanzee Sanctuary, an island in the lake, left at 1:30 and we arrived at 1:25. It was a fairly rough ride on the way out, there was a bit of a swell and we were heading into it and the wind. Everyone got pretty soaked. Luckily this is Africa and not England so we were all fairly dry not long after we arrived.

The sanctuary has been set up to look after rescued chimpanzees, most of them are young when they arrive and they do not get released back into the wild as they would not survive. They live in a fairly large section of bush and are protected from the human predators that caused them to be there in the first. Though they are not aggressive, they are immensely strong so we were given a safety briefing on arrival and pointed to the emergency point near the lake, chimpanzees do not like water.

We were there to watch the afternoon feeding session, the chimp’s are all behind electric fences so photography was not simple. I wanted to get some ground level shots as I like them more than shooting from above, but we were not allowed down there.

This was my favourite. 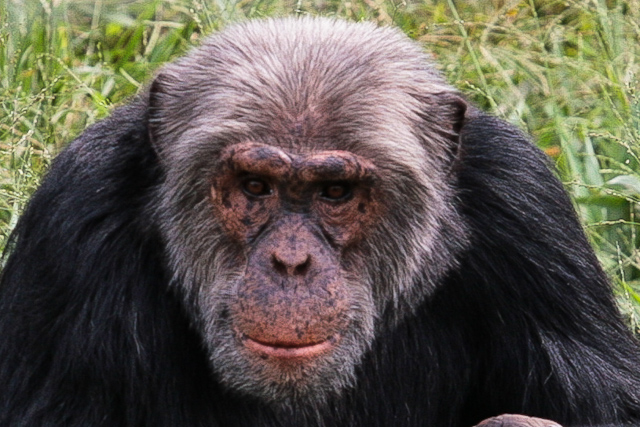 The keepers throw fruit over the fence for the chimps to collect, there was a little squabbling but they all know they will get fed so it was pretty tame. I love how they put their hands up – so human.

And this one sits just like I do when I am sitting on the ground eating fruit!

Once the feeding was over some of the smarter chimps got sticks to get the food that was caught under the electric fence, amazing to watch ! 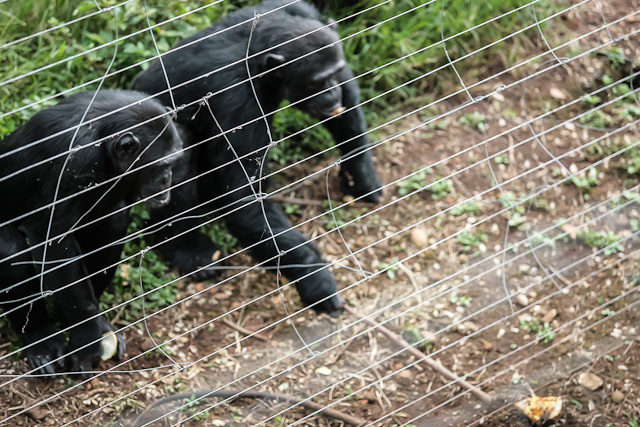 It was one of those experiences that I really enjoyed but was a bit like a zoo. Unlike at the cheetah rehabilitation place in Namibia the people here talked about the chimpanzees, their plight in the wild and what the sanctuary was doing. I guess for these chimps the only other option was death.

We had an enjoyable, late, lunch on the island before heading back to the boat for a fast and smooth ride back to the mainland and on to the truck. There were quite a few water monitors here as well. 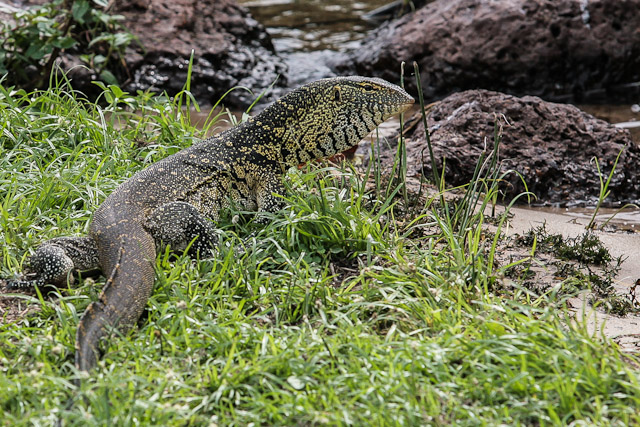 We stayed at the Backpackers Camp on the outskirts of Kampala. It is the guys least favourite campsite in all of Africa ! It was not the worst place in its self, but the music from nearby was seriously loud, it was like being at a gig and it went on to 2:30 am… I was not amused. It also had the most amazingly tight driveway, I was really surprised we got the truck through the gate and down the hill. Great driving!