I slept well until a pre-dawn chorus from about 4:00. Starting with dogs, then roosters, bells and the morning call to prayer. Oh well, at least it was an early night. The good news was the sky was almost clear and we had some great views of Mt Kilimanjaro to enjoy over coffee.

There were also some fabulous viewing to be had from the roadside once we were through the town of Moshi. 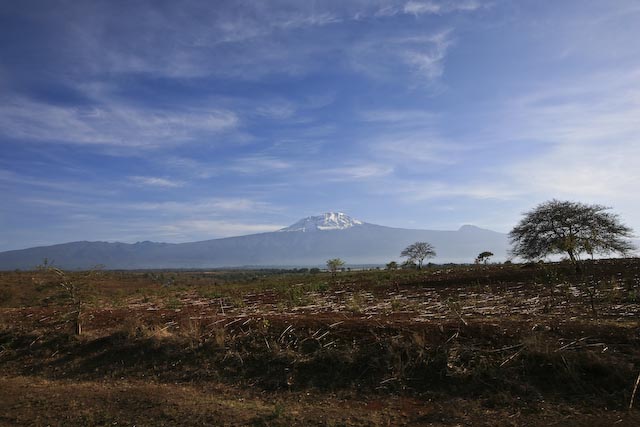 Mt Meru was not so cloud free this morning.

The countryside around this part of northern Tanzania is the lushest I have seen in Africa. There are small patches of quite dense native forest scattered amongst the small crop farms – it is all quite green. As we approach the city of Arusha it is obvious that there is more money around here than in the south, more and larger houses and far more private vehicles.

Arusha seems pleasant enough. Everyone on the truck, bar me, is going to do an overnight Serengeti tour in a couple of days. I have elected not to do it as it is close to 600NZD and in my mind not worth it. While they were all off getting frustrated with organising their park entry and accommodation I went and had fish and chopati at a local cafe with Will and Ebron, nice. 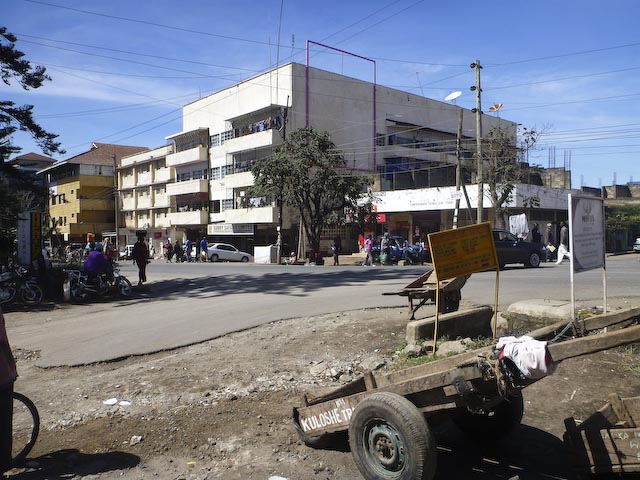 We all went to the mall in Arusha for coffee, cake, internet and shopping – I bought a six pack of beer and a bottle of whisky. There is still a long way to go on this trip 🙂 Security is obviously an issue here!

We stopped at the cultural centre for those that were interested in buying Tanzanite (a precious stone). I went for a walk around and looked at some of the carvings.

Lunch was had at Snake Park camp just outside Arusha. We will stay here in a couple of nights time and were here to do a Maasai village tour. While the countryside entering Arusha was lush and green it was the complete opposite on the way out, dry and arid plain lands. The land where the nomadic Maasai people tend their herds. 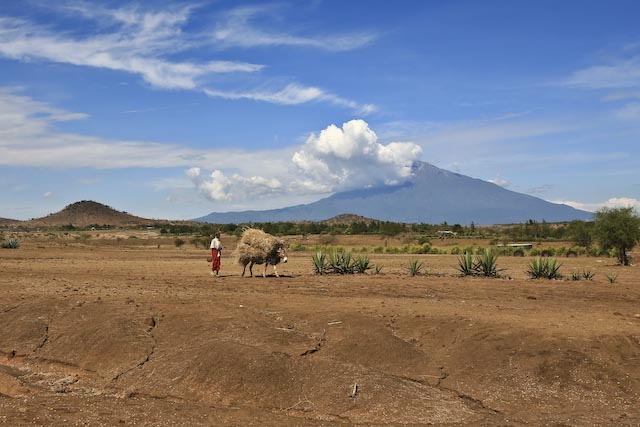 The Maasai village tour started with a walk through a cultural museum (and associated retail opportunities) followed by the local clinic – which specialises in snake bites. Snake bite is very common within the Maasai community with admittances daily. The clinic is not funded by government and nor do they charge their patients. The village tours help to fund the anti-venom and other medications. There were two children in with burns as well as a woman bitten by a spitting cobra as we visited.

The village was a fifteen minute walk away, it was really the compound of one man, his ten wives and sixty five children and grand children. Each wife has her own house hence the large compound!

We were mobbed by the younger children when we arrived. I am not normally a small child magnet, it’s not that they run in fear, they just normally select someone else over me. Inexplicably today was totally different and I spent some time swinging the smaller children around – until I was too dizzy to do it anymore. 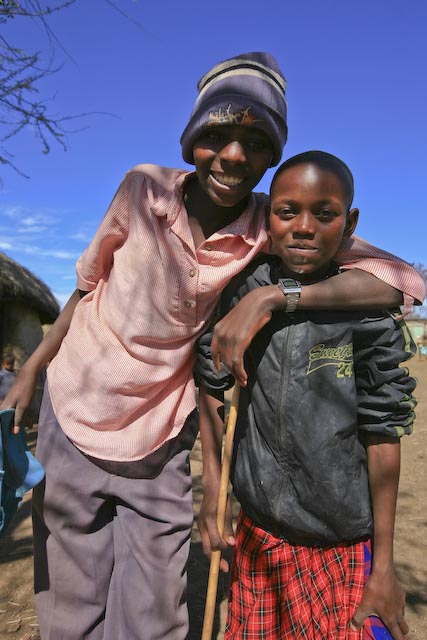 These photos courtesy of Leonie (though she doesn’t know it yet –  thanks :)) 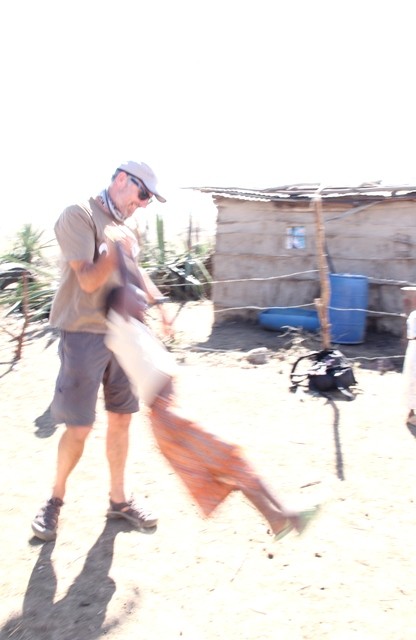 The village visit was interesting, we learnt a bit about Maasai life, this holding was one of the permanent camps an had been in this location for thirty five years. They also build small temporary camps as they move their herds around the area. The Tanzanian government have allowed the Maasai to roam where they like so they can move into areas restricted to other people – where ever there is food for the cattle, goats and sheep. They still practise male circumcision, though female circumcision is illegal. It was unclear if that was in reality still done. Our Maasia guide Olly, and his recycled tyre shoes.

After the visit we were back in the track for the drive up to Karatu and Kudu Camp our home for two nights. The cloud formations as we were leaving Arusha were fantastic, I have been really enjoying the clouds here. I even stuck the Canon out the window, for the first time…

The road to Karatu is flat and new, even though there was no wildlife to see, Will said we could open the top hatches to give those on the second leg an opportunity to stand up while we were driving. I took a few photos from out the top and then the glare guard on my 70-200mm lens blew off the lens and was run over by the following truck – Shite! 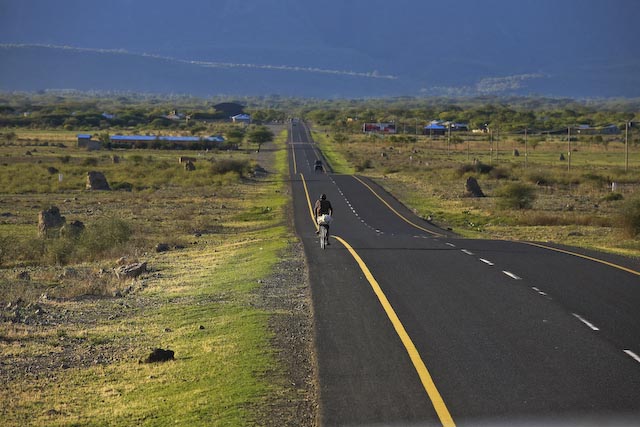 The road soon starts to snake steeply up into the hills and we passed by Lake Manyara which looked very nice in the fading light. It surely is a beautiful piece of Africa here. 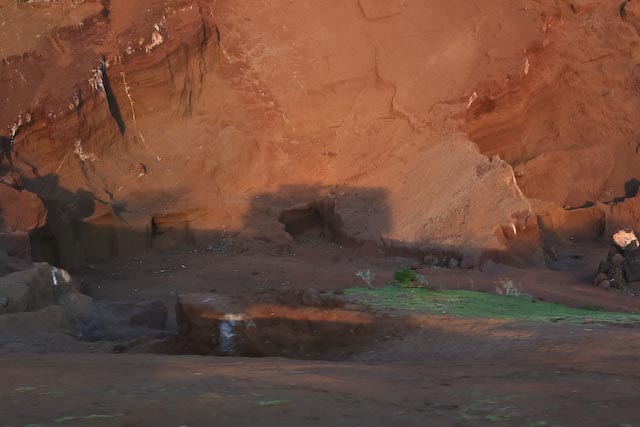 We arrived in Kudu camp just on dark and popped tents up before settling in to dinner, and for me an early night. It was a great day, one of the best on the second leg, lots of different things to see and do, so much better than driving all day.

It seems that we are going to have another four years of President Obama, much to the relief of all on the truck !