I had a great sleep last night, probably too good as I missed the hippos that came and visited the camp at 1:30 or so. I did hear the elephants trumpeting at 4:00 which was pretty cool. It was game drive day today so I was up at 5:20 again to be ready to get on the 4WD at 6:00.

We had two vehicles between us so this time I managed to get a seat near the side of the vehicle. Sth Luangwa park is approx 7500 sq km and has no fences so the animals are free to roam the surrounding area as well. The drive to the park is 8 or so kms from the campsite and we were not 200 metres away from the camp before we spotted a small group of elephants. Our guide, Joseph, said that had been in the nearby village, as it is the end of the dry season there is not much food left in the forest so the elephants visit the village at times and raid their crops, plus the elephants get bored with eating grass all the time! Before we reached the park we had seen a number of baboons and at least a dozen elephants.

The entrance to the park itself is across a bridge over the Luangwa River, you can see the river is quite low at the moment so the hippo pods are massive. These normally territorial animals will group together at low water. 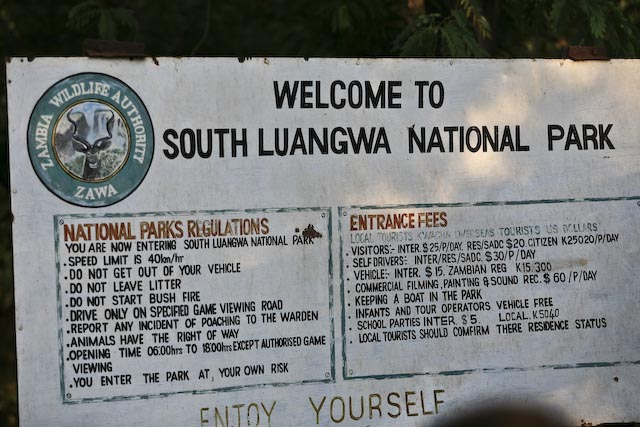 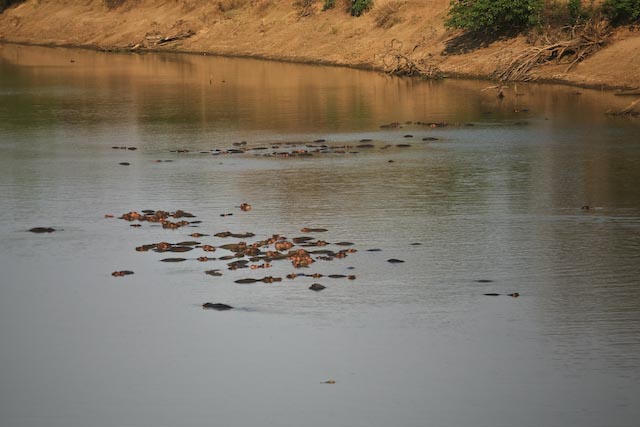 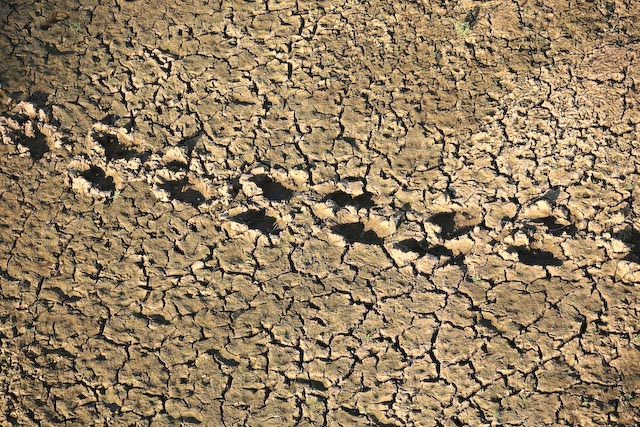 The game drive was pretty cool, we didn’t see a leopard, which was a shame, but we did see all the usual suspects. 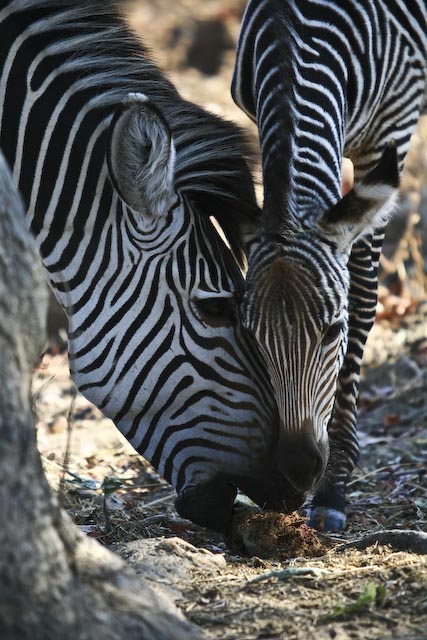 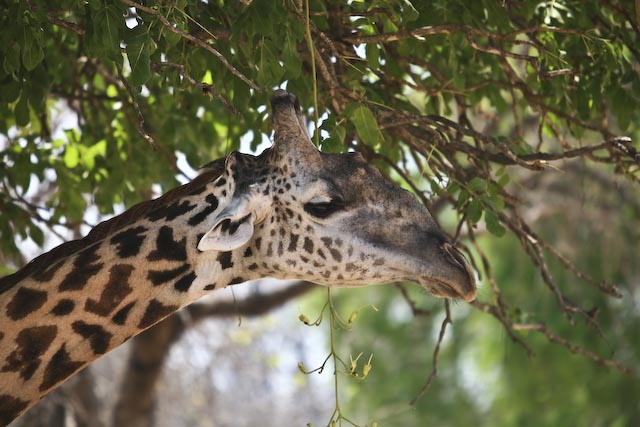 Warthogs – I still love them. 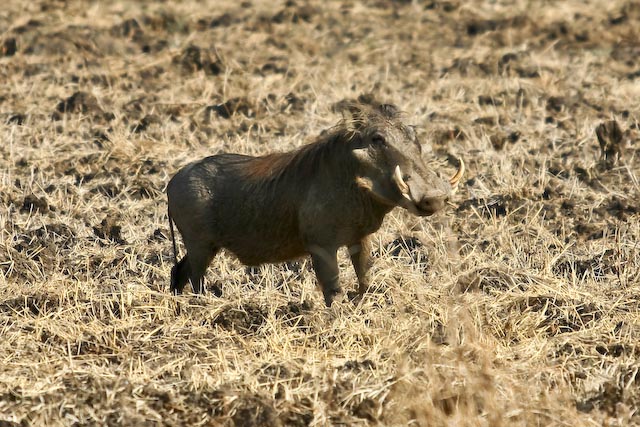 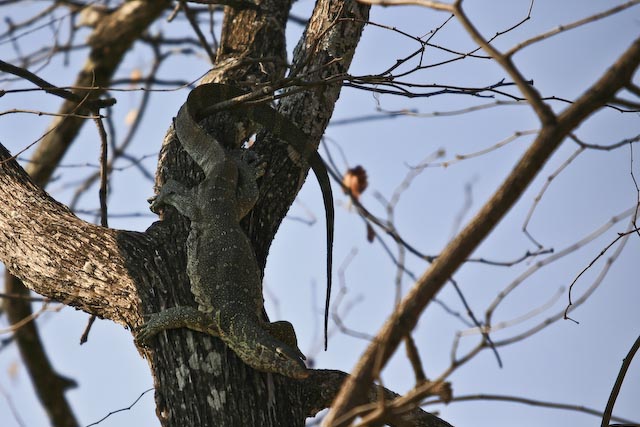 The impala are called the fast food of Africa, they even have an arched M on their bums! 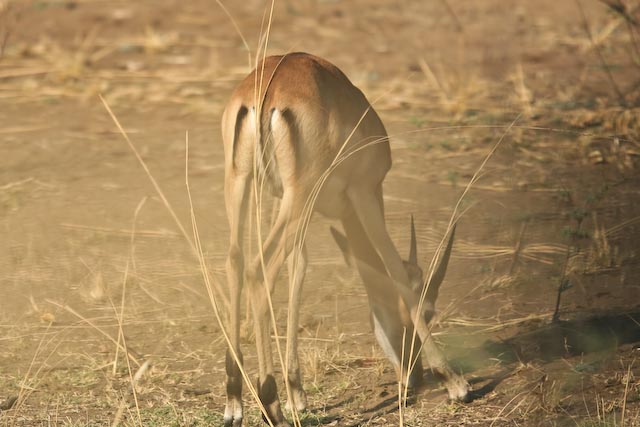 Yesterday afternoon lions took down a water buffalo and the body has been almost completely stripped of flesh already. We watched this group of vultures feeding for a while.

Until there was a gap in the tour vehicles near some very full lions. 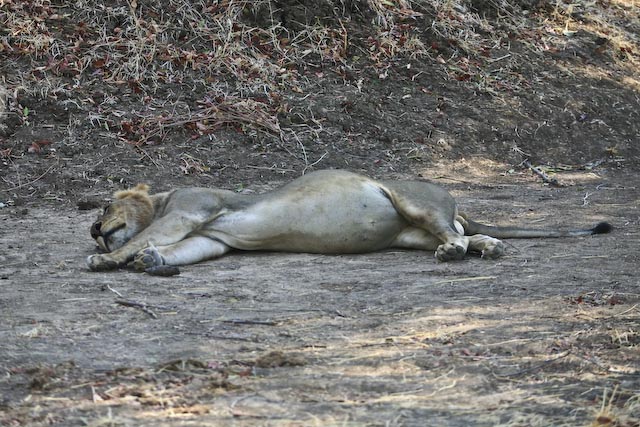 We took a coffee break on the side of a mostly dried up pool, I watched this puku for a while and was lucky to get it jumping over the pool made by hippo trails. 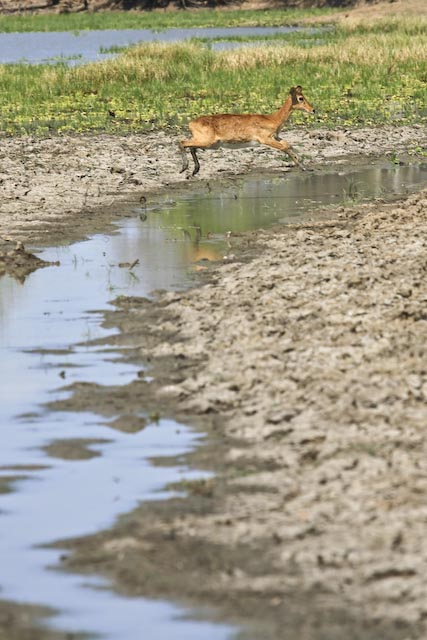 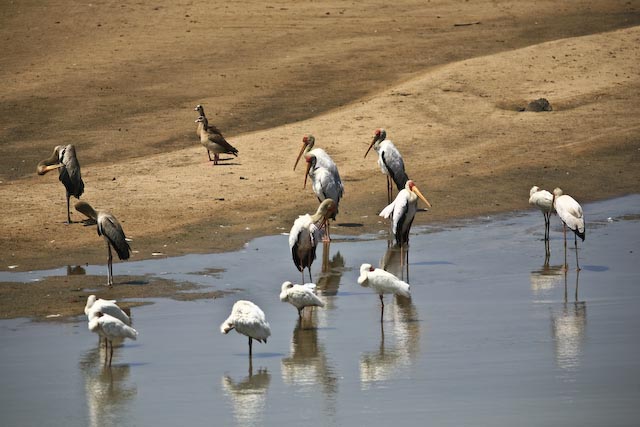 The game drive finished at 10:30 and it was back to the campsite for a lion sized brunch and a relax by the pool, and for me in the shade with the laptop to listen to music and blog in relative peace.

At 4:00 we loaded up into two game vehicles and went back to the park – half of us for a game walk and the others to start the afternoon game drive.

Like the game walk in the Okavango Delta we were given specific safety instructions before we left, but unlike the delta this time we had a guy with a rifle escorting us as well as the guide and the back marker. The walk was an hour and a half long and we didn’t see much game on the ground – a few impala was about it. We were given a good introduction to the nature of the area including another good overview of animal dung. Including some dung beetle balls. 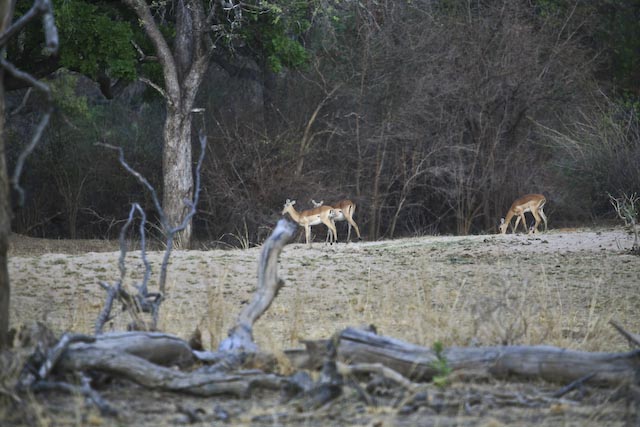 We walked down to the upper river bank to see the massive hippo pod and spotted a couple of fishermen in canoes that were really upsetting the hippos. There was a fabulous chorus of bellowing and snorting from the disturbed hippos as they moved from one side of the river to the other to avoid the fishermen. I think we were all hoping for some action from the hippos, but they all seemed too lethargic and didn’t even raise their heads in a display. 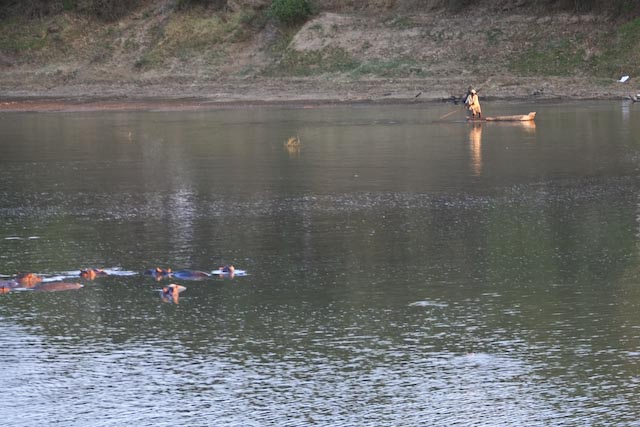 After the game walk we went on a night time game drive. The only thing we wanted to see was a leopard, though the first thing we found of interest was a lone hyena. He, like all the wildlife, was completely un-phased by our presence and just carried on strolling along the side of the road, ignoring the spotlight shining on him.

We didn’t see anything for quite a long time after that until finally our spotter saw what we had all been waiting for, a small male leopard hiding in a bush, he was incredibly hard to photograph, low light, in a bush at a distance. This was as good as it got, but I have seen a leopard! I have now seen all the big five – lion, elephant, rhino, buffalo and leopard, though I still want some decent photos of the last three. 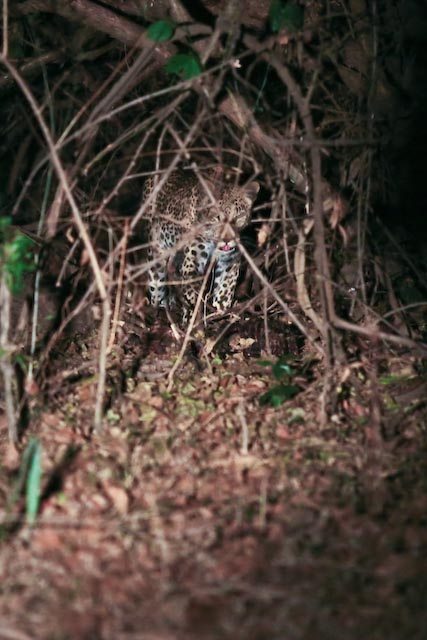 On the drive back to the main gate we caught up with a group of trucks and to our delight they had spotted another leopard, we managed to get a great spot as she walked out of the bush to cross the road. She looked like she had been injured, she was limping a bit and looked very weary. I felt sorry for her in the end as she was pursued by us and a bunch of other trucks loaded with camera toting tourists. I was glad when we left – but equally glad to have seen such a magnificent animal up close! 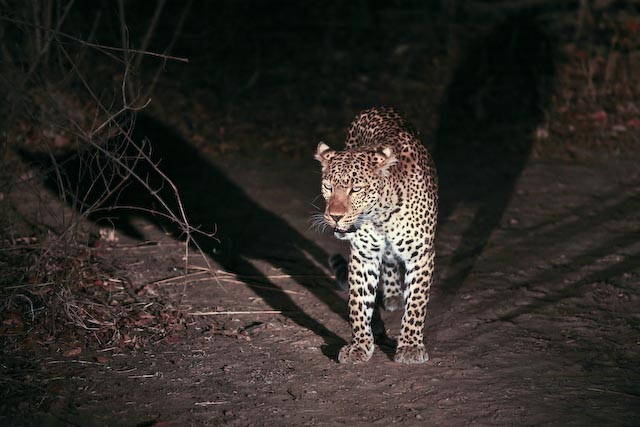 Dinner was a late affair over a glass or two (well a plastic beaker) of a very warm shiraz.