I was slightly hung over when the sound of breakfasting people woke me at 5:00 AM, thinking it was time to get up I staggered out of the tent to find it was the Nomad truck people from the next campsite – I went back to bed for another half an hour before it was our turn to get up and start the day. I lingered as long as I could before dragging myself out.

Bizarrely, I found a group of young guys off of one of the other overland tracks applying hair gel in the bathroom – each to their own I guess.

We were on the road for 7:00 again, there was a long day of driving ahead and not a lot to see so it of was headphones on and head back for a doze. Once we clear of the more desert like surroundings and in to some quite well grassed plain lands we started to see quite a bit of wild life – sadly they were mostly too far away to photograph. We saw springbok, kudzu, dik dik, orix and some ostriches, awesome, just what I am here to see, it was very exciting as we spotted species for the first time, I only managed a fleeting shot of these springbok. 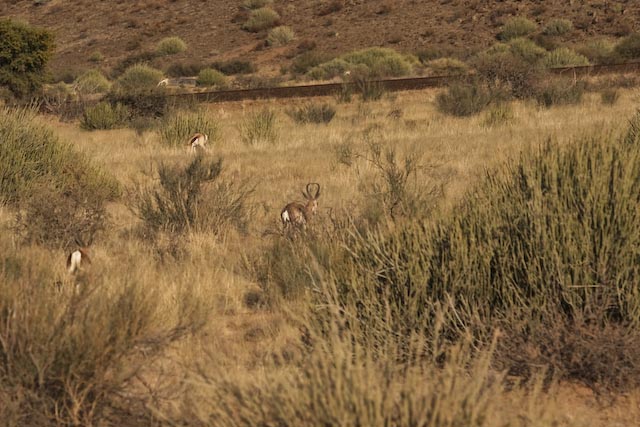 And these guys as we whizzed past in the truck. Donkey is quite a common form of transport here and the rear end of broken down cars and utes make for great carriages. 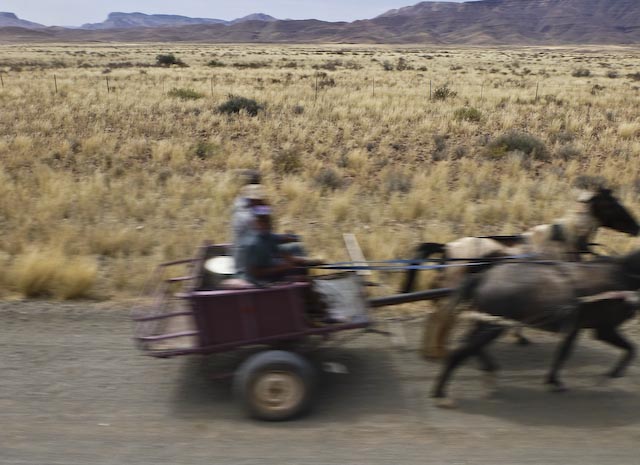 The plains soon turned back into the moon like rocky desert and it was back to dozing again.

As we pulled into the small town of Bethanie for a coffee break the truck took a (slow) emergency stop, flipped a u-turn and headed back up the road in to the wilderness for a hundred metres before coming to a grinding halt. We were all wondering what was going on when we saw Will, our driver, come round the side of the truck with a small tortoise he had seen in the middle of the road and was moving to safety. We all jumped out and snapped a few photos. 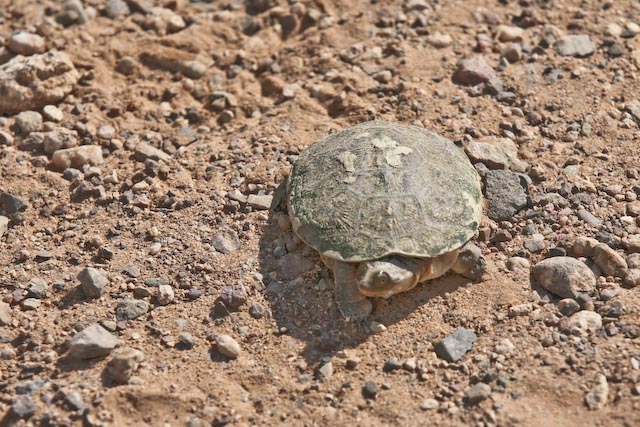 After the excitement of the tortoise we stopped for an hour long coffee break in Bethanie, it was pension day so there was a number of people around waiting to get money out of the bank – and sadly in many cases go next door to the liquor store and spend it. 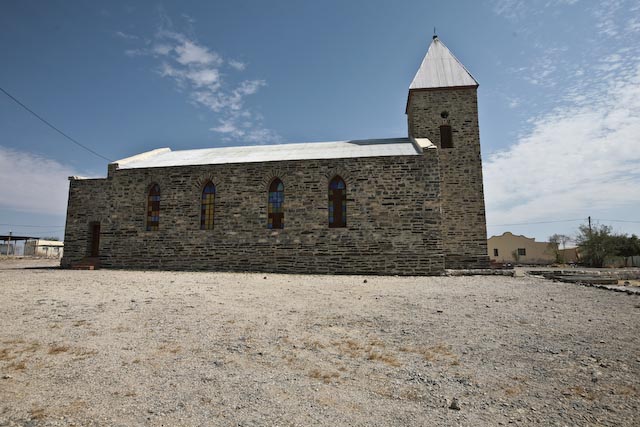 There was a cool little lizard hiding under a tree that got the full paparazzi attention. 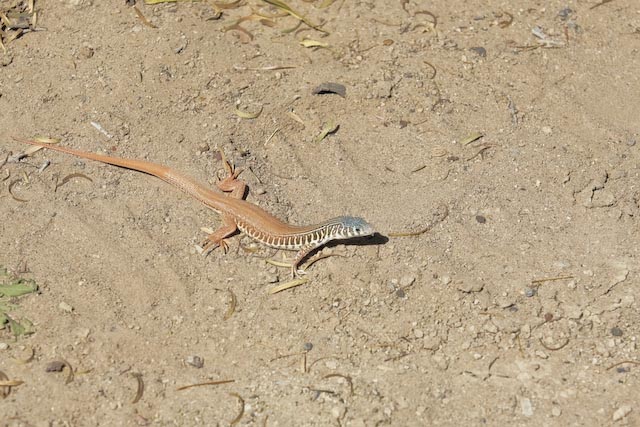 The next stop was an amazing socialable weaver bird tree on the road side. The socialable weaver birds build massive joint nests in the camel thorn trees, I had seen a number on the journey and had wondered what they were. It was great to stop at a massive example and be able to taking some photos. The birds disappear as people first approach but come back fairly soon. I am not a birdie person but I could not help but get stuck in taking photos. 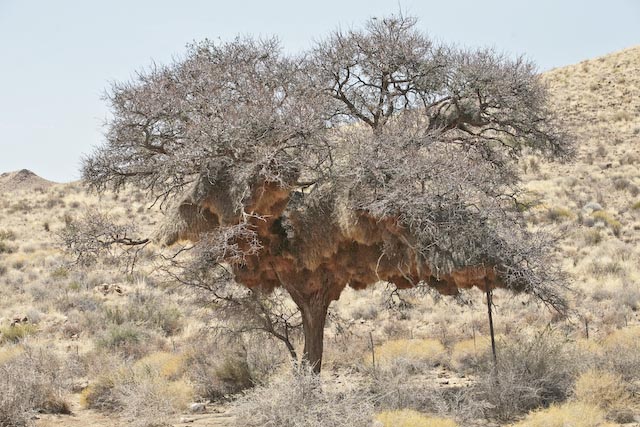 We stopped for lunch under a shade tree that is obviously used by a number of the tour companies on the journey through Namibia. I love these road side lunch breaks, I get to wonder around and take a few pictures as well as snatching a few moments of solitude. Some days I wonder if I take photos so I can disappear by myself for a while with the handy excuse of doing something creative. 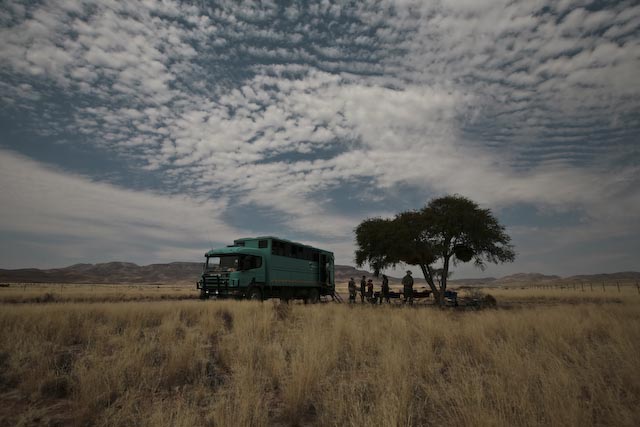 It was a long drive to our night time stop in the “town” of Seisrem- basically three or four lodges and campsites on the side of the desert. I was really looking forward to the desert, two days of hilly grasslands with limited wild life had me edging for something different to see. An hour or so away from the camp site we entered a private game reserve area and started seeing springbok and oryx which we had seen before and had gotten a little used to. But, all of a sudden we saw a herd of something gathered in the plains and they were mountain zebra. Awesome in its awesomeness, for me this was the first taste of real wild Africa. Even with a 400mm lens they were too far away to get any detail – and way too shaky shooting from a truck – even if it was stopped. But wow – I am in Africa Africa now 🙂 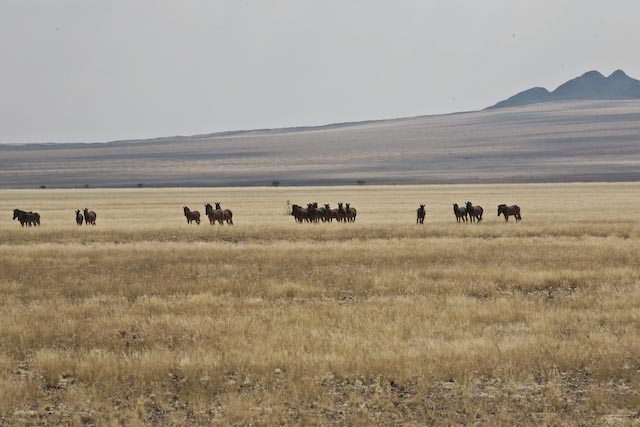 Sadly we didn’t stay long before heading off to our night stop at one of the campgrounds in Sesriem, but it was great to have a shower. It is incredibly dusty here, thick sand everywhere – it was like Siem Reap in Cambodia – feet and legs are just going to be covered in dirt for a few days, before and immediately after a shower.

We went out for another sunset shoot, with Brett providing some great lessons to those in the group who are wanting to improve their technical knowledge of photography – tonight was a bit about white balance – something I do not worry about too much myself – and perhaps I should as I am not shooting raw at the moment. The sunset was not particularly spectacular sadly, but an ND filter would have been great. 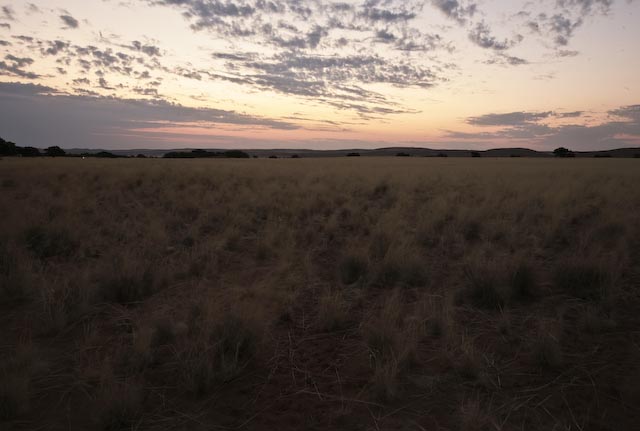 Dinner was a fabbo pasta and Ibron had

made a very nice chilli soy option for the veges in the group, though I would have been more than happy with the beef mince! With a very early 5:40 am start tomorrow it was an early night!