Comfortable as my bed is here I had an awful sleep and ended up not dragging myself reluctantly out until almost nine am. Pretty much when we left to go to the supermarket for the weekly shop. I picked up a few things for my Africa trip as well as a couple of bottles of cheap red to sup on over the week. Back at Jim’s I had a late breakfast, soon followed by lunch – I so love eating!

It was a nice day in Kent, cool but clear and I was keen to visit castles so Jim and I visited the town of Rochester a few miles away. I am reasonably sure I have never been there before, though I am sure mum will correct me if I am wrong!

The castle was started in Roman times and was built on extensively until Norman times in the early 11th century until it was involved in a series of sieges and rebuilds up until the early 14th century. Being quite close to London it was the scene of a number of minor historical events until it fell into disrepair late in the 18th century. 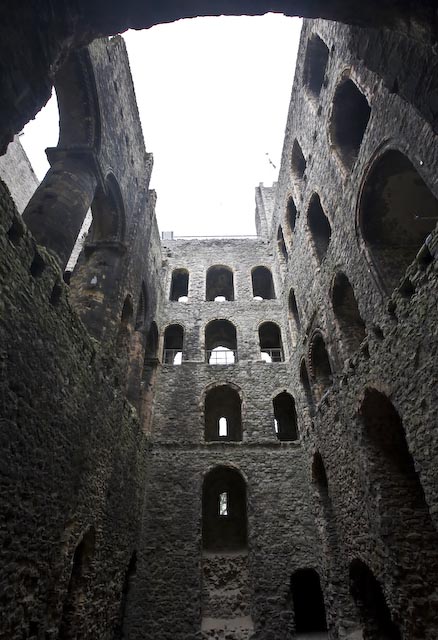 It is quite cool that it has not seen much restoration.

From the battlements there was a great view of Rochester Cathedral.

The old part of Rochester town was quite nice as well and well worth a visit. Jim and I stopped for a cup of coffee, or in my case a hot chocolate as I am not a coffee drinker in the afternoon (or it seemed to my complete ignorance in the morning ) .

I was deeply tired with a cracking headache and yawned my way back to Dartford and had to go and have a lie down when we got home.

I cooked a basic pasta meal for dinner and we watched a bit of TV before I went to bed.

it was nice to get out into the Kentish countryside.