Wow today (Wednesday) I celebrated 5 months of being unemployed ! wee dram, alone in the room etc etc – but that was later in the day, honest !

Did sod all on Wednesday, got up late, my room has air con and wifi so there is no reason to go out, Bangkok is foul at the moment, hot and humid so not going to go out unless necessary. So blogging and email was all I did in the morning, mid-afternoon I caught the train to MBK mall with the aim of buying a couple of shirts, a pair of shorts and replenishing my panadol and bathroom kit. I could not find any shorts I wanted, nor a light weight running shirt – at a price I wanted so settled for a couple of t-shirts.

I had dinner at the yellow curry place at the end of the hostel street, $1 and it is great and then went back to the room for a couple of whiskies and more blogging, emailing etc.

Thursday morning I booked my flights on the 4th April to da nang – Bangkok to Ho Chi Minh City on Air Asia and HMC to Da Nang on Vietnam Airlines and applied for my Vietnam visa on line. I then left the hostel into the oppressive heat and made my way to the China Visa office. I was kinda thinking that this would be more straightforward than Myanmar as not many euros would bother trying to do a visa from here, what I totally forgot about was lots of Thai people want visas’ so there was a massive queue…

I know a few people who have China visas with no detailed plans to visit, no flights booked or accommodation reserved. My research on the internet suggested that this was OK, but it was not. I waited for almost four hours in queues to have my application rejected as I had no flight booked. I was disappointed to say the least. If I decide to go I will have to apply when I am in Vietnam but at least I will have a plan then.

A while ago I read a couple of crime novels by John Burdett that were set in Bangkok,  I recently discovered I had all four books on the e-reader so started reading them again, now that I  can put a few of the place names in context, the stories are a lot more interesting now. The lead detective’s mother runs a brothel on a street called Soi Cowboy, which I thought was made up, it isn’t !

I saw it from the train station at Asok when I changed from the Skytrain to  the MRT  on the way to the China visa office, so I nipped down to the street to take a photo, and no I did not go in,

The rest of the afternoon and evening was spent doing more blogging, they take so long to write so by the time I was getting to the last few days I have noticed the mistakes are creeping in and the sentences are getting shorter.

I had an email from Giovanni saying he was in a flea pit hostel up by Khao San Rd (KSR) and was meeting R n B up there tomorrow.  In Myanmar I vaguely committed to joining them up there and as I had not stayed in the area, and it is something that all back packers should probably experience –  and most under 25 do – plus a few unrepentant hippies, I agreed to meet him up Friday.

So Friday morning I checked out of my nice clean, air conned, wifi’d hostel and caught a couple of trains and the boat up river to KSR and checked into the flea pit Sitdhi Guest House. It is under a quarter of the price of my old place and the room is like a cell in the middle of the building with no windows, it has a single bed and a fan in the room. It is hot hot hot and humid humid humid.  It is not that close to KSR so hopefully will not be too noisy at night ( well that was  a stupid thought !).

I spent an hour or so slowly dying in the room due to the heat and then decided to go for a walk around and found a bar with wifi and have a beer under a fan and do some interneting. I took a walk out the hotel – it was almost cooler outside, even under the mid-afternoon sun, and almost immediately ran into Richard and Blothnard (R n B) who were picking up a bag they had left in Bangkok while in Myanmar. We made a plan to meet later and i went back to the Sitdhi to find G and let him know the plan. I lay dying in my room for a bit longer and then had to leave for that beer and fan. The four of us all met up at 6.00, had a beer and then went in search of some cheap eats and t-shirts on KSR.

We had a great noodle meal for a buck and then G bought a bag of bugs for us to share…. 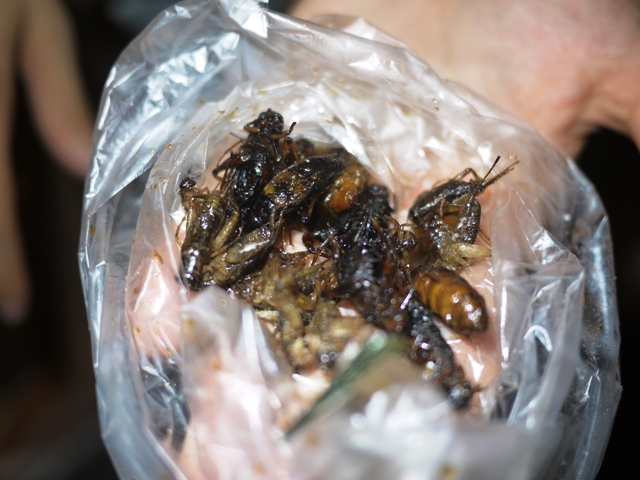 Grasshoppers, crickets and grubs – I thank God he didn’t get the cockroaches – they were huge. I tried one of each, they were OK, deep fried and almost like a chip, but I ate them hesitantly as you just don’t know if juices are going to explode in your mouth when you bite into them… a bad photo, but I am eating grasshopper ( not the one from Kung Fu 🙂 ).

After the bugs we wandered for a couple of hours around KSR, it was pretty much as I expected, loads of cheap clothes and tourist stuff, and a load of noisy bars full of people drinking buckets of liquor ( a bucket is literally a small bucket, I would guess a litre, that is filled with cheap booze) and massive containers of beer. It was starting to get rowdy when we wandered off back to the quieter part of KSR and had a beer together before going back to our rooms. I grabbed a bottle of Pepsi on the way back and had a couple of drinks before lying on my bed sleepless for the rest of the night.  The room was not quiet !  Amazing how many people after a night out managed to eat something that upset their stomachs.

8 thoughts on “I ate a grasshopper – intentionally.”