I have always been an avid reader, as a child and young adult I was drawn to novels of adventure and mystery and there are certain place names that even now send a small shiver of expectation of adventure up my spine. Mandalay is one of those places names.

Up at 5.00 am for a 5.15 taxi to Yangon airport. This was probably the crustiest taxi we have had and the driver certainly had a touch of the formula one driver about him, his intent was to pass everybody on the road and not allow anyone to pass him, it was a fairly fast ride to the airport. Check in was as manual as the ticket purchase, but at least it was straightforward. There was a lot of people in the airport, I am guessing that to save costs they maybe only open the airport for certain periods ? A lot of flights went out at a similar time to us.

The flight left 15 minutes early ! I guess when everyone is on you may as well go. The plane was an ATR prop jet, it was about half full. It was a full service flight so we had coffee and a croissant and a free newspaper. Great flight but the visibility was appalling and I didn’t get to see much, so I read the paper and caught up on Myanmar news.

We arrived in Mandalay at 8.00 and took a mini-van to town, the mini-van seems to be the  only choice to get there, accept maybe tour buses. Cost for the mini-van was 4000 kyat each (about $5) for the forty five minute drive, and we were taken to the hostel we wanted to go to. Which was full…. Bugger. Luckily there were a few others in the immediate vicinity so we wandered up the road to the Nylon Guest house, which turned out to be pretty good and better value than The Winner Inn in Yangon, it did have wifi, but it was sporadic at best. The view from the room. 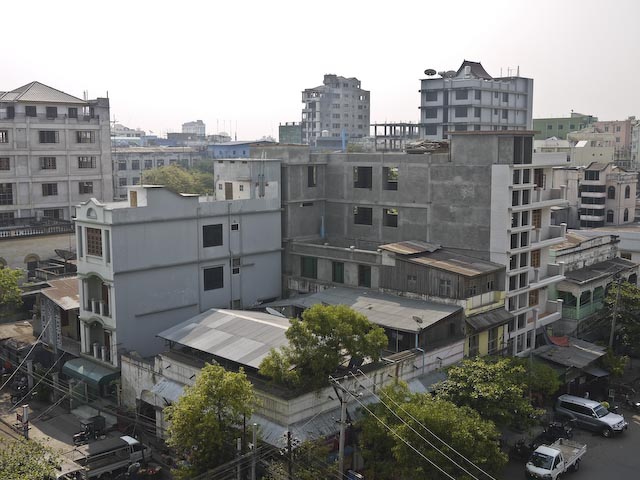 We took a small walk around the immediate area. Mandalay is not like I expected, given it is a famous SE Asian city and the capital of Burma for many years. We were in a fairly central area and the city is quite run down, even in comparison to Yangon, it is very dusty and the pollution from the cars is eye watering. Unlike Yangon motorcycles are allowed in town, and like everywhere else in Asia, road rules just do not apply to motorcycles.

We stopped at the Rainbow restaurant for lunch, which was pretty good, washed down with a couple of Myanmar beers, which was even better. There was a lot of locals drinking beer and whisky for lunch.

Myanmar is famous for its  red splattered streets, betel nut chewing is very common here and not something I have seen anywhere else is SE Asia, reminds me of Papua New Guinea. The local people in the bar, both men and women had red stained lips and teeth. Given the lack of dental care and hygiene in Myanmar, the staining really made the mouths of some of the people we met quite unpleasant looking.

We had a bit  of a rest after lunch and mid afternoon started on a walk to and around the royal palace walls and on to Mandalay Hill. The hill houses a few stupas and is the single high point in Mandalay and supposedly offers great views.

We planned on walking around the Royal Palace walls, which are approximately 2kms each side.

The walk was long and hot and after a couple of km’s a trishaw ( bicycle with a small side car) rider came past and offered us a ride, it was on my list of things to do so we took it to Mandalay Hill. I am glad we did, the walk was a lot further than I expected ! 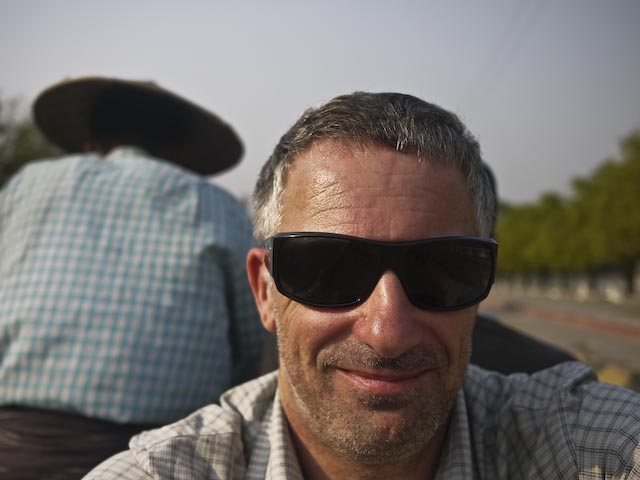 The trishaw was a bit more expensive than I would have liked, and this really proved to be the case throughout Mandalay – I suspect there was some price fixing between the providers as there was no bargaining and taxi’s were twice the price of Yangon – and five times the price of elsewhere in SE Asia. By the time we left the city we were pretty unhappy with the gouging as were most other backpackers we spoke to.

The Hill was pretty good though there was no view at all due to, according to a local man we spoke to “fog”,  it tasted like smog to me, but he said there was no smog in Mandalay as the was no industry… There were numerous Pagoda up the hill and I had enjoyable walk snapping photos on the way. 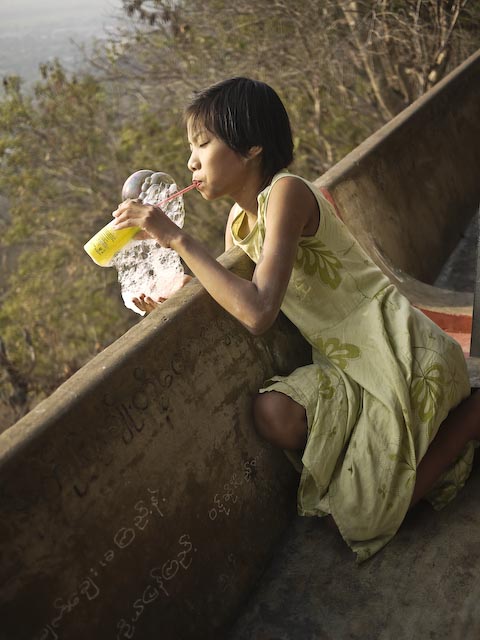 Apparently Buddha stood here and pointed down from the hill and prophesied a great city would be built here in 1857, which was when the king Mindon Min moved the capital to Mandalay and built the palace.

A number of people live on the hill, selling souvenirs and drinks to tourists, Mike and I bought a couple of sketches of Myanmar scenes from on vendor. Myanmar is a lot like Cambodia and Borneo, the lack of good infrastructure and a rather lax attitude to rubbish disposal means there is rubbish everywhere.  Mandalay Hill, which is the prime tourist attraction in Mandalay is covered in trash, everywhere you look off the path to the summit is covered in rubbish.

After the disappointment of a lack of view from the top of the hill and there being no chance of a good sunset we walked back down again and I took a few photos of the setting sun, through the “fog” over the moat of the grand palace. On the way down we stopped to chat to an Burmese English teacher who said he had been a political activist and had fled Myanmar to Thailand a few years ago and had just come back now things were changing. We had an interesting and slightly cagey chat about politics and life in Mandalay for a while. We all hoped for some good news on the by-elections on April 1. 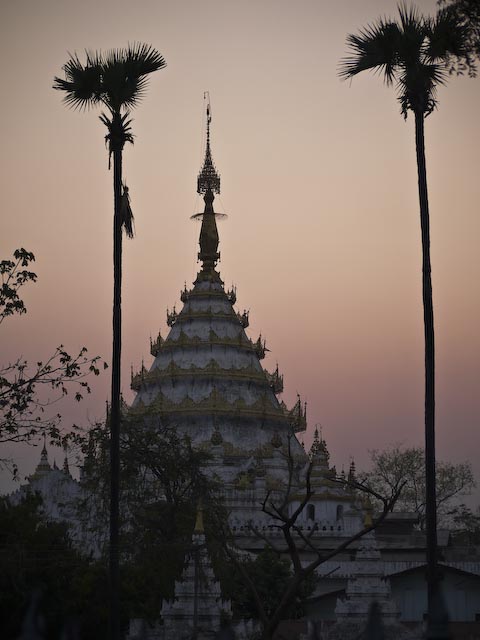 We then took a motorcycle each back to the hotel and went out to the  Lashiolay restaurant, a Lonely Planet recommendation for a fairly good Shan meal and a couple of beers. The local food is heavily influenced by India so is quite spicy. We had a couple of chicken dishes, a spicy potato and a vege dish with rice. The food was OK, the quality of the vegetables here is considerably lower than elsewhere I have been,  so though the food is well prepared and cooked and tasty enough the meals are not great – not anyone’s fault of course. I am also very cautious of the chicken as nothing seems to get wasted here….

After dinner I was pretty whacked so back to the hotel, for what was the best shower in SE Asia, as the internet was down it was an early night.