I went to bed last night feeling a wee bit average but was Ok by morning, up at 6.45 and had coffee and cereal in the hostel before packing up and heading out on the next leg of the journey, another new adventure and another new country – and a day closer to seeing some of the awesome sights around Siem Reap, I just need to get there first. We walked up to the train station about 7.30, hoping for, but not expecting to have a fairly empty train ride. As we got to the platform a train arrived but it was so packed there was no way we could have made it through the door with our packs and day bags, so waited for the next train, which arrived very soon after and was not so bad –  though we went into different doors to fit in ! we took the train to the end of the line at Mo Chit.

At Mo Chit we spent five minutes trying to find a taxi driver who understood where we wanted to go, we weren’t sure if they had no comprehension of “north bus station” or if the fare was too small so they faked a lack of comprehension! Eventually we did find one and the ride to the station cost exactly what the hostel suggested it would, even if he is meter was ‘broken’.

We had a forty five minute wait at the bus station for our ride to Aranya Pathet, which is the border point with Poi Pet in Cambodia.  I had my first ever Dunken Donuts – I only had it for the coffee, honest !

The four hour bus ride took five and half hours and the bus seemed to be smaller than the ones in Malaysia so I was a bit more cramped, we stopped at a charmless gas station for a break. I always thought “Metal Mulisha” was a New Zealand thing, obviously not.

Just out of Aranya was passed a police checkpoint, the guy sitting in front of me did not have ID and was ordered off the bus, by the time the cop had got to the front of the bus (which had picked up ten or so standing passengers) the guy in front of me had been missed and was all smiles as the bus left again with him still on. Then we got to the army checkpoint, where he was not so lucky…

At the border town the bus was swamped with tuk tuk drivers offering to take us to the border, not knowing how far we selected one at random and he appeared to be charging the same price as the others at 80baht.

We piled on board and off we went. Sadly our tuk tuk driver, and the others carrying western tourists, took us the fake Cambodian visa office, I had read about the scam a while back so was semi-expecting it. It is basically an office a hundred metres from the border where you need to get your Cambodian visa, it is a total scam. If it was a visa office the guys would be uniform and it would be at the border, not a hundred metres away. I walked off with Mike behind me and we headed down to the border where we got our visa’s in Cambodia rather than in Thailand. We could have walked from the bus, it was only a few hundred metres, but ignorance is preyed upon as it is everywhere. 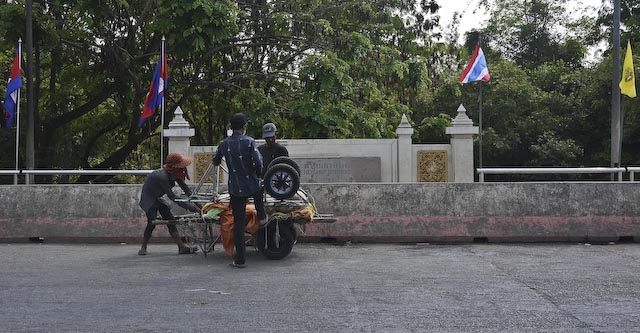 The boarder crossing for us tourists was a bit more normal, with passport stamps and customs checks.

Once in Cambodia we caught a free bus with about 20 other backpackers t to the main bus/van/taxi terminal. It was our intent to get a taxi the two hours to Siem Reap rather than the four hour bus trip, but there were so many touts and confused tourists it was pretty chaotic.  I think most of us wanted to get into groups of four to make the taxi only a couple of dollars more than the bus, of course the taxi drivers want to split the herd into smaller groups, which is what they did so well most of us ended up on the bus, so they lost in the end. The bus ride was slooooooow, at least it was airconned.

It is towards the end of dry season here and it is very obvious, it is very dusty and dry and the fields are fairly barren.  It is obviously not a wealthy area and there is an intresting mix of vehicles on the road.

We stopped for an hour for dinner, and to let the engine cool down, at least that is what I hope they were doing : )

It was dark after dinner and the remaining hour to town was pretty quiet, most people, like us just wanted to end their day of travelling. Once into town we were mobbed of the bus by tuk tuk drivers and just got one who knew where our guesthouse (Siep Reap Holiday Garden villa). It was a ten minute ride in, and I must say I enjoyed the tuk tuk experience – at least there is air.

Siem Reap is a lot different to what I imagined, on the edge of town there are a lot of big (huge in some cases) hotels, the roads are good and it is pretty clean. The centre of town is a bit more like your average SE Asian town centre, crowded with cafes and bikes and people in all directions. Our guesthouse it a ten minute walk from the main tourist area of Pub Street, which suits us fine.

We went out to one of local eating houses for dinner, I had a very nice Khmer curry and rice and a beer for about  $5 NZ. The curry tasted quite similar to the Balinese curry that I make, though slightly different ingredients.

At night, our part of Siem Reap seems OK, we have a karaoke bar at the end of the street, but apart from that it all seems quite quiet here. The guesthouse appears to be almost empty. We have a big room with two king size beds, air con, TV with 100 channels (I just watched England lose to Holland in a football friendly) and a decent hot shower. All for $10 a night.

Ah, The Mint chicks, sadly defunct, but I must admit I wasn’t excited about the last album and their new direction. But in their heyday in the mid 2000’s they were awesome. The album “F**k the golden youth” is a great great album and live the Mint Chicks were fantastic, one of the most entertaining live bands Auckland has produced. This track “take it, I don’t want it” is from that album and captures some of the live manicness.