I will start this post with a minutes silence to remember the earthquake in Christchurch a year ago today. I have a few good friends there and thankfully none were amongst those that died or were injured. Though, all my friends were impacted by the event in a real way, through loss of job, damage to property or serious injury to a close friend. Christchurch – today our thoughts are with you.

It was nice to not have such an early start today, considering the large rum I had just before bed and the very early start I had lousy sleep last night, really hoping this is not a return to normal as I have been enjoying some good sleep.

Breakfast at a leisurely 7.30 and then meandered up to the diver shop for the 8.45 dive briefing, I have not worn shoes or sandals or even jandals for three days it has been great to just be barefoot on the sand!  There were thirteen of us on the boat but my group was a dive instructor, a trainee instructor and one other diver (he had 12 years diving) which really put me in the junior diver position – as well as the oldest diver… That I was the junior became quite obvious as the day went on!

Kids on their way to school as the dive boat is loaded – it must be so much better than walking to Green Bay Primary!

The first dive was about an hour and a half away by boat and from yesterday I learnt to bring some entertainment and secure myself a decent spot on the boat – so once on board I plugged my ears into some sounds and lay down for some faux sleeping.

The dive site at Nunez Shoal is an underwater atoll with a shear wall drop to 220 metres. The current was quite strong as we dropped into the water but the visibility was amazing. We cruised across the atoll and the lead dive master gave the sign to drop as we hit the wall drop and stared into big blue. If you have never gazed into the blue depths off the edge of a reef and looked down into the blue fading into black (I am sure there is a song title there somewhere) you will not understand how awesome it is !

We dropped down the wall to the maximum allowable depth of thirty metres and then just let the current move us along the wall for a while. There was not a HUGE amount of life on the reef, though plenty of things to look at, with some great coral, and lots of things below in the dark…. We slowly drifted up towards the top of the atoll and spotted a good array of nudi branches, moral eels and all the usual tropical fish suspects and all too soon it was over as my tank ran low. Being a noobie to the diving, and deep diving especially I suck air a lot faster than the pro’s, the instructor used half as much air as me, as we talked about the dive he commented on the amount of effort I put into fighting the current ! He also uses the same rig everyday – and for renters it takes a while to get used to even the smallest change in gear.

It was a good dive, stunning visibility  – wished I had the same on the shark dive yesterday!

From Nunez Shoal we motored over to Calangaman Island where we stopped for lunch – and a few photies.

A new definition of outside

The dive on Calangaman was similar to Nunez shoals in that we dropped onto a flat bed around 8-10 metres and then over the edge and down a wall to around 30 metres, though there was far less current on this dive.

This dive was pretty crap ! Someone used my rig from the last dive so I ended up with a tank with less air than I would have liked, given I suck more than others, this was not good. I started with 190bar rather than 220 that was in MY tank. I have also been using a fairly crap weight belt for the past three days and when I hit the water from our “giant stride” entry, the belt came off,  I managed to grab it but a 2kg weight came off and, well dropped like a 2kg weight. I got another couple of weights from the boat and guides but they were placed in the pockets of my BCD (buoyancy compensator) and I was out of whack for the whole dive, I really struggled to get buoyancy sorted and was up and down all over the show, which resulted in fast air consumption and a rough dive. This was a shame as the wall was amazing! Again – great visibility, even at 30 metres, we saw a huge tuna and swam in the biggest school of fish I have ever been in as well as the most beautiful soft coral forest. It  was such a shame to cut it short and surface 😦

The weather really packed in on the hour and a half ride back to Malapascua, with a massive downpour of rain – though no wind ! so the sea was flat calm and the rain drops on the surface looked fabulous – and not captured here at all.  it goes to show how fast the weather can change, from baking sun shine to heavy rain in an hour.

Soon after the rain stopped we were blessed with a visit by the local dolphin pod ! fantastic, we were all whooping and cheering as the dolphins frolicked –  slightly out of useful camera range ! 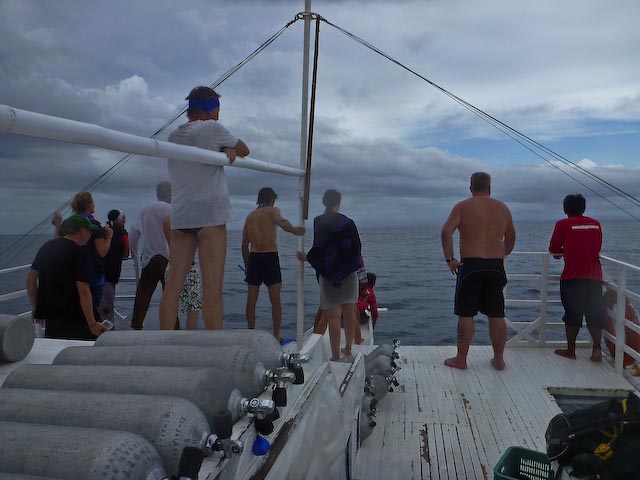 Finally getting back to the island for sunset. 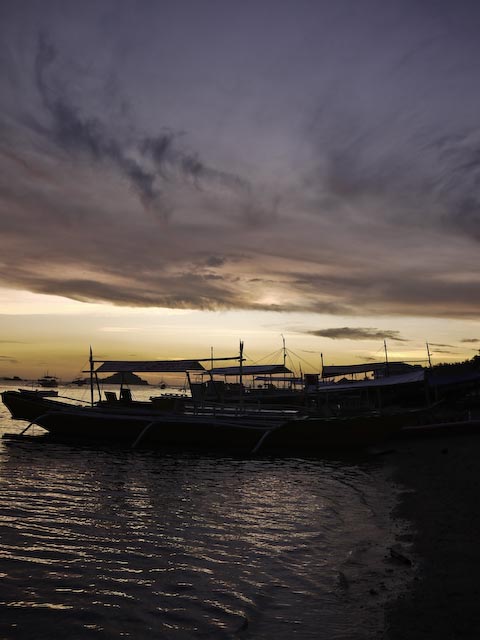 All up my seven dives and advanced open water cert cost me about $480 NZD ! I loved diving here, and the sleeping shark was my personal highlight even though the thresher shark dive is the big one and the reason I came here in the first place.

After a good dinner in the resort and a couple of very cheap – and alcoholic cocktails I went back to my room to blog.

Tonight’s musical treat is from the last of the big three post rock bands, Texans – Explosions in the sky. I had the privilege of seeing them live just before I left New Zealand, and was blown away by their show.  I have listened to these guys for a while now and have used them for photographic inspiration a number of times, in fact a few of my old images – back when I bothered to name them, used titles stolen from EITS songs, as they have the most wonderful song titles. I guess being lyric-less the title of the song helps to invoke the image you want the music to portray.

I have been a big post rock fan for a while now, probably the genre I listen to most these days.  Oh, how tastes change, all those years of listening to punk rock and fuzzy pop and sneering at the idea of ten minute instrumental tracks, and here I am relishing a new fifteen minute opus…

Not my favourite track of theirs, but the most appropriate – six days at the bottom of the ocean