Day two of diving started off with a massive downpour ! fortunately we were waiting for a hungover graduate from the day before school to turn up, which she never did, so we left late and the worst of the rain had subsided so we didn’t get soaked walking to the boat. It was probably good to have a cloudy day as I have a wee bit of sunburn from yesterday.

Today we are diving Mantabuan Island, again about a 45 minute boat road from Semporna town. This island is inside the marine reserve and normally has a resident guard on it to watch for illegal fishing, however the island was in between guards and there had been reports of dynamite fishing on the reef (also known as reef bombing), so Kyle our English dive master took the camera to photograph and damage. There was three divers and three snorkelers today. Mantabuan is surrounded by a reef so we will be doing three boat dives today as our boat is too deep to get to the beach.

Our first dive was on a reef called black coral garden and you could easily see why, the water was clearer here and I think if we had a sunny day the visibility would have been incredible, as it was it was still 15-20 metres (much better than the 1.5 in Lake Pupuke!).  About twenty minutes into the dive there was a loud BOOM under water, we all instantly knew what it was, reef bombing ! Kyle made sure we were all calm and we carried on our dive as it was not the close, soon after there was a second BOOM, a bit further away but still a wee bit scary. Kyle, was fairly cool with it all so we trusted him and carried on with the dive. We soon started to come across the odd dead fish and then more and more, culminating in an area that must have had thousands of small fish, all dead, surrounding damaged coral. This was probably the epicentre of the explosions. As we were running low on air we surfaced here. Kyle and Egdar, the Malay snorkel guide were incensed at the reef bombing. Not so much for our safety, though the bombers knew we were down and dint care less, but because of the damage to the reef system. They tried to call the army out but we had no cell reception, but soon after we saw an army patrol vessel and managed to hail them over and point out the offending vessel.

The army went after them, but as their boat was too deep to go through the reef, they had to catch a ride in a local canoe !

The second dive on Sham Sham and the third on The Channel were a lot less exciting than the first, no one was trying to kill anything ! We saw a lot of marine life, three great turtles a couple of snakes, one very close up. We also saw a lot of damage, huge swathes of destroyed coral and I found a dead turtle, its shell had been split, it was so sad. Just as we were wrapping up the dive, a school of 100 or so barracuda swam past, awesome !

Kyle our dive master and Jay 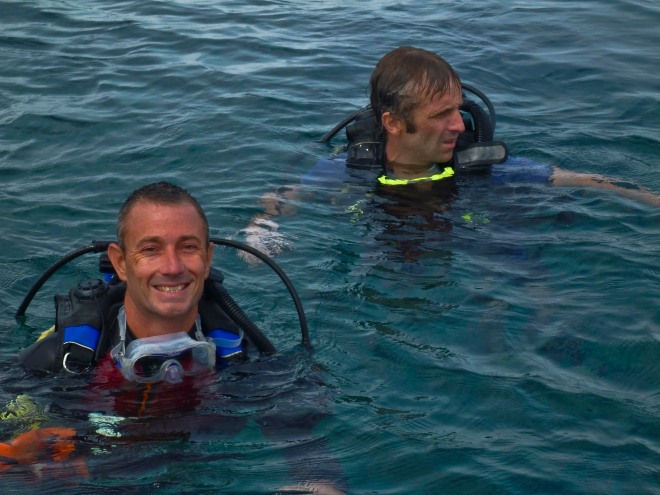 Apart from the obvious the dives were great, good visibility, plenty to look at, both good and bad. Another good day.

I spent an interesting couple of hours chatting with Kyle when we got back on shore, he has been in Semporna for 18 months now and is very passionate about the reefs and the water that surrounds them.

In our dorm are two guys who I met at the Pinnacles walk at Mulu, they did the walk the day before I did. At the local Indian tonight they introduced us to banana roti, my God, they are absolutely delicious ! The roti’s not the two guys, I have not crossed over!