Day two started a bit later than day one, I slept well and was still dozing at 6.30 which was great. Breakfast consisted of a baked egg and ham pasta and baked beans… Yum !

I was just getting ready to get out the door for the day when the fire alarm went off. I threw a few things in my bag and made a slow exit down the stairs, no obvious signs of fire so I was in no panic and the people in front of me seemed less so. We all made it down to reception by the time the alarm stopped, and people were already heading back up the lift, so I did likewise…

I started off the day with a walk through Little India, checking out the Tikka Centre first, though it was probably a bit too early for real action, but the food court was interesting with a good mix of butchers, fish mongers and green grocers selling their wares. The smell of spice was pretty awesome 🙂 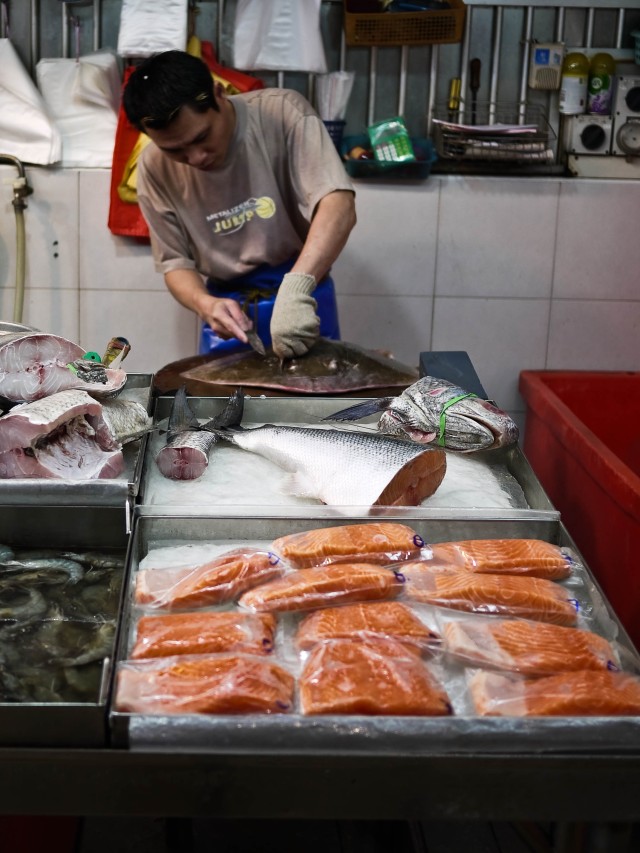 The first floor of Tikka was pretty much dedicated to tailoring and the selling of saris, and no, I do not want a suit or a shirt made, though I had plenty of offers.

I mooched around the Little India for a couple of hours, stopping for a beer, a rest and a wee at the Inn Crowd backers. The place was pretty full but everyone seemed to be doing their own thing and the guy who’s table I invaded seem none too thrilled at the intrusion, I am assuming he didn’t speak any English as I apologised for the inconvenience and he didn’t even bother to grunt. We were obviously not going to be travel buddies!

The Sri Veeramakaliamman temple was my next port of call and I spent an interesting half an hour wandering around its interior.

From Little India I moved down to the Kampong Glam area, an old Malay Muslim part of the city with some cool old buildings and the Sultan Mosque. I had a chicken kebab and apple tea lunch just outside the mosque, so got my daily protein in.

The area also had Hadji Lane, the “alternative” street in Singapore, which had a cool selection of shops and the only graffiti I have seen in Singapore. There were two quite funky bike shops.

and the Blog Shop…..

I missed the Singapore Flyer due to the rain (and lack of camera) yesterday so walked back down there today, I was not planning on taking the ride but once I arrived I decided to spend the thirty bucks and go for a spin. The views from the ride were amazing ! I will take back any comments I made yesterday about the lack of high rises in Singapore, they are just well hidden.  The photos are all taken through thick ‘blued’ glass, so apologies for the colour cast, and I cannot be bothered trying to correct it.

Don’t tell anyone, but this shirt was worn on Christmas day and has not been washed, I am running out clothes, but will wash in Kuching. I am practising for the feral life of a backpacker 🙂

When I came in from the airport two days ago we drove along the coastal highway and I was amazed at the number of large ships that were queued up waiting to get in to port. I used to work for a shipping company, if you were wondering why this was interesting !

On the walk back towards the city I got to test out the umbrella mum bought me for my birthday, it worked fine, which was good as it hammered down. I made it into a mall, through a convention centre to another mall where I stopped for a coffee at Starbucks. Best coffee of the trip so far, a sad indictment on the standard of coffee in my hostel as I am not a fan of Starbucks coffee. When I popped out of the mall the rain had stopped and by good fortune rather than good skill I ended exactly where I wanted to be, which was completely the wrong place ! The building I thought might have been Raffles (it was old and majestic) turned out to be the Park View hotel

A bit more map reading and I found Raffles, which looks nothing like the Park View !

I made my way up to the Long Room bar where I laid my thirty dollars on the counter and bought myself an original Singapore Sling cocktail (a Singapore must do !)  It was nice, I could have sunk a few if I wanted to spend all my money and end my travels today. One of the key features of the long room is the free peanuts, it is customary to shell the peanuts and throw the skins on the floor.  What miffed me about the Raffles experience was the guide books (and interweb) said there was no admittance to the bar in shorts or sandals, so I sweated in long pants all day only to discover most of the patrons had shorts on. Oh well, it was Raffles Hotel!

After my cocktail, I headed back towards the hostel, past the Singapore Art museum. The sun made a brief appearance as I walked back and it got seriously warm for a while.

Past the Photographic Society of Singapore.

I picked up a couple of cans of Tiger from the local seven eleven and went back to the hotel for some serious relaxing and another early night.

Tomorrow I will experiment with another format and load photos to Flickr and link them. This post took close to two hours to create, and the text was pasted from Word. Maybe there is a better way to do it. I did at least find out how to do line spacing !