I was at my sister’s house this evening and she was fretting that my nephew, who is away for a few days camping with friends at Tawharanui, hadn’t texted her all day – even though the arrangement was he wouldn’t text everyday ! This got us talking about how mobile phones had changed the expectation of parents on the volume of communication required by their children. I commented on how we used to bugger off for the entire day when we were young and no one worried at all, well maybe they did and we just didn’t know it ! I must ask my mother.

As I started writing this post I was reminded of that conversation and how when I was in my early teens we used to spend a few days up at Mangawhai each summer and my friends and I would go spearfishing in the estuary. We would be gone for hours with snorkelling gear and spear guns and come home late in the day with the occasional fish for dinner. No one ever came to look for us, even when a large school of sharks swam up the estuary and the beaches were all closed… We spent many happy summers snorkelling at many beaches around Auckland and further afield.

When I left school many years ago, through a lack of any direction, I followed my dad and did an aircraft engineering apprenticeship with Air New Zealand. I stuck out the five years of the apprenticeship, but left soon after as engineering really was not my thing. Soon after I started the apprenticeship I realised what I really wanted to be was a marine biologist, but I never did anything about it at the time, or ever since and have only done one dive in the last twenty years.

Hmm, rather long pre-amble, sorry ! back to reality !

An acquaintance of mine, Alex (I am sure he will appear later in this blog as I am staying with him in Kuching), told me about the awesome diving to be had all over SE Asia so I decided it was time to live that thirty year old dream and do a dive course before I left. I signed up for a four day course with the local PADI shop, Dive HQ in New Lynn and completed the course last week.

The first two days were spent watching videos and answering questions in the mornings with the afternoons spent practising the skills in the pool in the afternoon.  It was certainly interesting and at times challenging, learning to do some of the skills around things that can go wrong takes a certain amount of trust that you are not going to suck in mouthfuls of water with each long breath. The last two days were open water dives and sadly we were not graced with good weather!

Wednesday we went to Jones Bay on the Tawharanui Peninsular, ideally we would have dived at the Goat Island marine reserve, but the wind and swell direction put paid to that. Jones bay was still rough, but once under the surface the visibility improved slightly and the swell dropped.  We completed two dives and demonstrated a number of skills to the instructor. 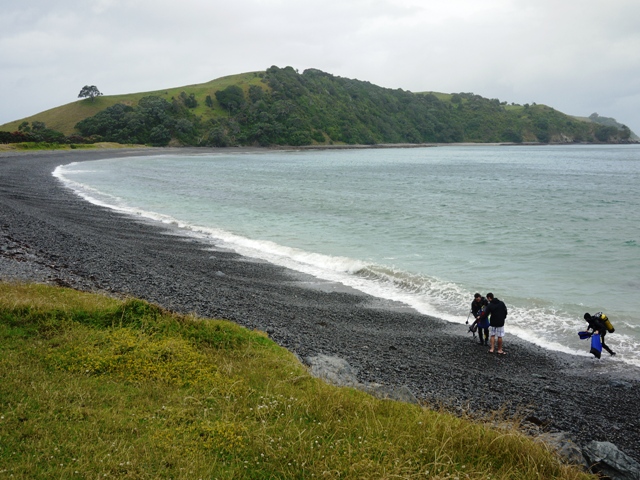 There was no improvement in the wind on Thursday and the showers were far more frequent so a decision was made for us to dive in Lake Pupuke on the north shore. This was greeted with some nervousness as someone drowned there earlier in the year on a dive course, though not with out school. I was glad we did it, I can say I have dived there and will never need to repeat ! it was an interesting dive, though with a lot of surface chop the water was quite murky.  We did two short dives and demonstrated the remaining skills and then got out fairly quickly !

Ready to go, warmer in the wetsuit, yay for summer 🙂

I enjoyed the course, glad I did it in NZ before I left, diving in cold, murky and choppy waters means I will be completely relaxed in clear, warm and still waters in SE Asia – just make sure there are no sharks !