It has finally arrived ! The day I start walking, so yep, naturally it is raining.

I had a good English breakfast in the hotel after a restless night. Loads of sausages, bacon, eggs and beans, some good protein and energy and a whole pile of food sitting in my belly to use up the extra energy consumed. It tasted good though

I hung around the hotel lobby in a state of nervous tension, jumping up to look out the window every 30 seconds to see if the rain had stopped. It was still drizzling at 9:30 but I thought ‘sod it’, donned my raincoat and pack and headed out the door. I was off !

My first stop was 100 metres away at the bottom of the hill at the ‘Hands statue’. A large bronze by Owen Cunningham and installed in 2001. I stopped for the obligatory photo, luckily there were two Dutch women who were starting a week’s walking and one of them kindly took my photo for me. I meet these two ladies a few times over the next three days.

I am the only person I see wearing shorts…

I guess I go this way.

The weather was still failing to inspire though. 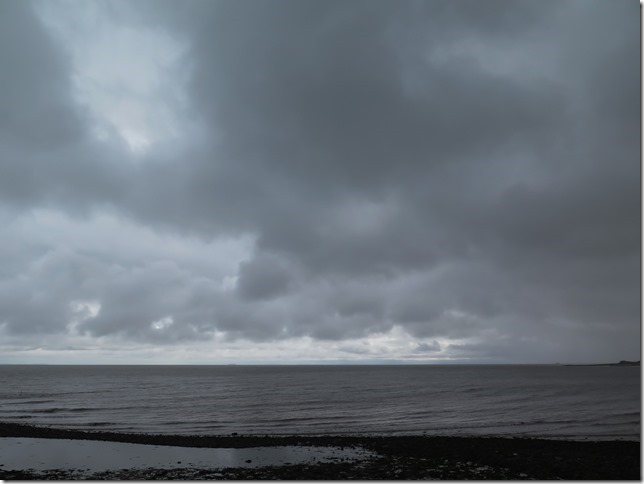 After a few minutes of walking to the edge of town I was finally out and in the countryside with seven miles to go to my first night of camping in Porlock. I am planning on following a commonly recognised route of walking between towns with campsites and other facilities. Today’s walk is supposed to take just under four hours. I will then be able to assess how my walking speed relates to those in the guidebook I am using. (The Trailblazer series). The acorn is the symbol of the SWCP and I will see an awful lot of them, which is a good thing.

The rain stopped soon after I hit the trail proper and just before I started up North Hill, the first climb on the path. It got quite steep in parts and was not all smooth wide graded track – honest.

By the time I got to the top I was pouring sweat through my jacket and stopped to take it off. I also needed to make an adjustment to my pack as it was riding a bit too low and restricting my hip movement a bit. It should be riding on my hips anyway, at least it is easily adjustable. I was knackered already !!

The forest is really lovely here, it is totally different to NZ forest, being a lot more open and lighter with a clear break between the trees and underlying scrub. I really like it and I particularly  like the big fern areas. 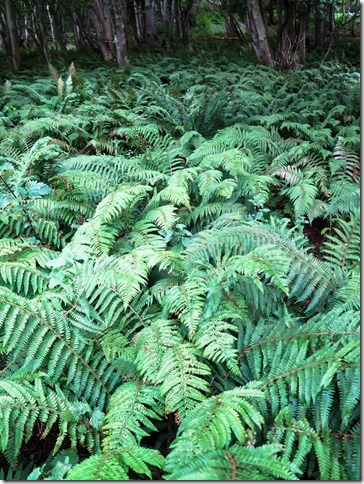 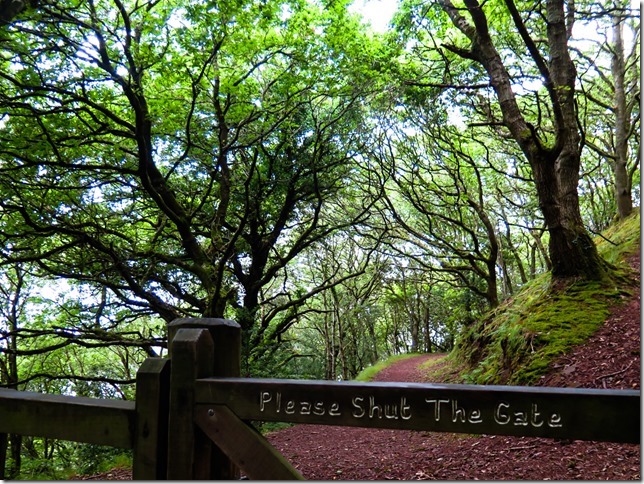 Finally I am at the top, and the day is clearing up nicely as well.

The walk across the cliff tops, on the edge of Exmoor national park is lovely, rolling coastal path, it is warm and humid and there is a constant warm head wind as well. Strong enough that I noticed the gusts when they hit me and my pack. I see plenty of wildlife, Exmoor ponies, cows and even a very hairy bug on the trail – I do not see any other people. Love it. 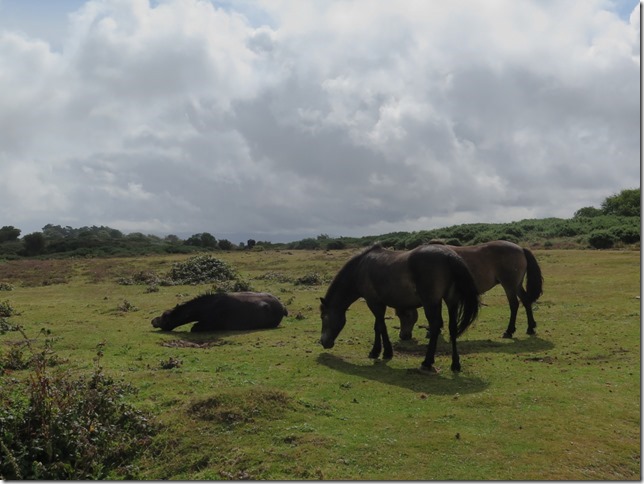 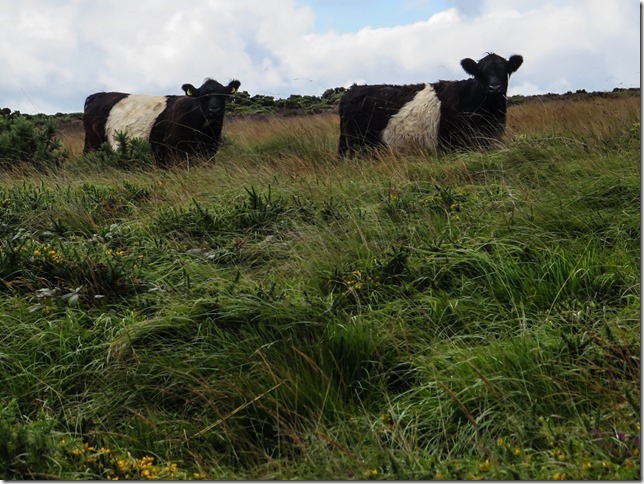 The moorland is wonderful, there are patches of farm land, but this early section of walking is through what I call proper moorland, grasses and wild flowers abound, it is wild and beautiful and exactly what I wanted to see when I decided to do the walk.

I stopped for a rest and a snack bar on a bench up above the beach near Porlock. Reading my notebook it says ‘I am aching all over…’ My body is not used to the hills and not used to carrying any sort of weight. I note that I am expecting to be sore in the morning – and tomorrow is a seven hour walk!

Back on the trail I am soon round the last headland and overlooking the town of Porlock, and down the coast to where I will be walking tomorrow – those headlands just keep on going! 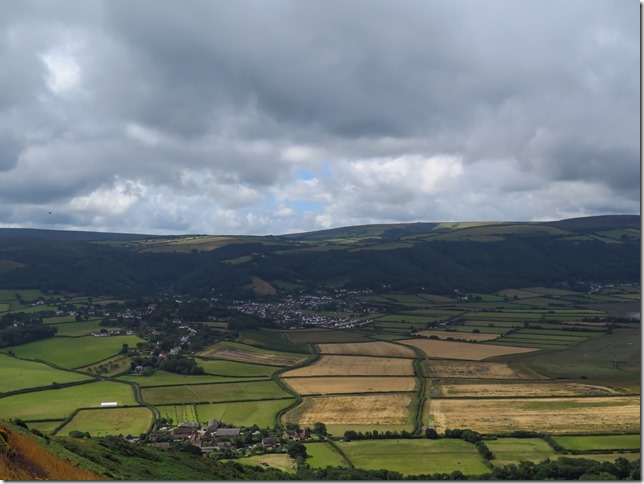 The track down the hill in to Bossington was just screaming to be ridden down, not technical by any means at all, just fast, gloriously fast. Sadly, I was just walking and not riding a mountain bike.

At some point after this I managed to do two stupid things, I suppose it was good to get them out of the way nice and early. Firstly I didn’t pay any attention to the map and ended up on the wrong path. This was not disastrous as I didn’t go too far wrong, just ended up with a bit more road walking than I would have liked. Secondly, and another failure to pay attention, this time it could have been worse as I turned my ankle on a rock. It was a brief flash of pain, and a brief flash of ‘oh shit’ went through my mind, but luckily it walked off fairly quickly. I would have been gutted to have hurt myself before the end of day one. My left ankle is a wee bit dodgy, it is weak and turns easily. I know this, I should have taken care. Or maybe I should have bought boots?

There was no crisis either way and I made my way into Bossington to look for the small cafe there so I could stop for lunch. I had a cheese and onion toastie and a chocolate shake and they were both really really nice. I felt like I had earned them too. 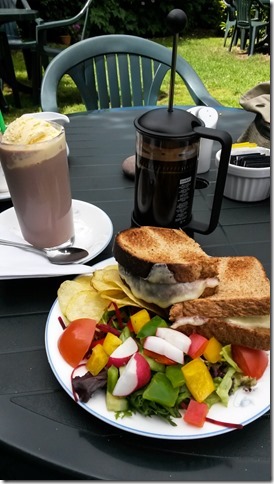 Bossington was cute, I like a cute English village and the coast path passes through many many of them as it winds its way through Somerset, Devon, Cornwall and Dorset. I suspect I will take lots of photos. 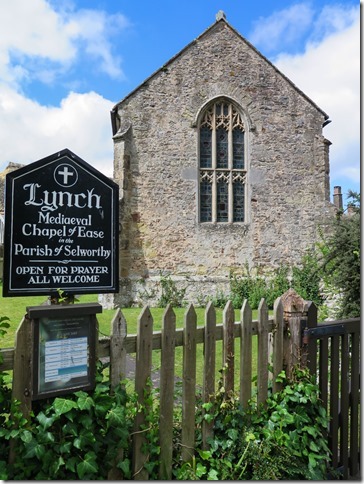 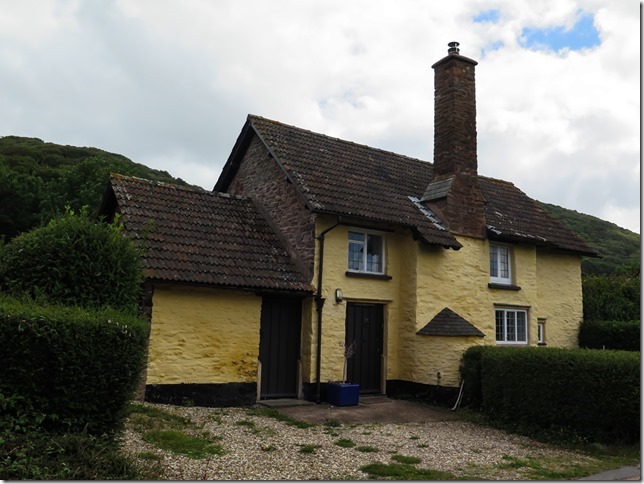 Not far too to Porlock now, I lump the pack back on to my back and head off up the hill from Bossington to Porlock, I am not sure if I take the correct path, but end up where I want to be so no complaints. Except – why are campsites always up a hill ?

I arrive at SparkHayes campsite early in the afternoon and get my tent up under nice sunny skies. The campsite is large and quite quiet, this makes me happy. I put my tent up near a wall to try and break some of the wind, with moderate success.

It was then time to break out the new stove and make my first cup of coffee on it. Very exciting, so exciting I took a picture so you too can share in the thrill!

That was the end of day one of walking. It took me 3 hours 50 to do the 4 hour walk. I think me and the guide book will get on just fine. Especially if I actually read and follow the map.

I had dinner in the Lorna Doone hotel. I stayed there when I visited Porlock in 2012, and remembered that the food was nice. They also had a decent sauvignon blanc as well. I had a couple of glasses with dinner before making my way back to my tent, settling in for the first time and reading until it was dark. I met the Dutch ladies again in the restaurant, though they are having their bags ported a long the coast and are staying in guest houses. A solo walker along with a family group of walkers arrived in the campground while I was out. I will see them a few a times over the next few days too.

Day one went well, really well. I am thoroughly enjoying myself.

I was originally planning on taking my small laptop on the walk so I could edit photos and write posts as I went. This was a stupid idea really, and I wisely tossed that one out a while back and bought a small notebook instead. I made lots of notes as I went. It was the right thing to do.

Another great sleep, but no sleep in this morning, up at 7.30, coffee and finish packing up my stuff for the trip to Cornwall. The walk to Bristol station took about twenty minutes so I left nice and early and thankfully the morning was dry. The bus was half an hour late arriving and the guy who loads the bags into the bus was the grumpiest bugger I have met in England. Bus stations in the morning are an interesting place to people watch, lots of people moving through some happy, some sad, some completely nuts ! It was an interesting time.

I was going to be getting three buses today, the first two were booked, Bristol to Taunton and Taunton to Minehead, the third was going to winging it. At the station I found out I could get a bus directly to Minehead, frustratingly this was not an option available on the National Express website, oh well. The ride to Taunton in Somerset was pretty good, more in the country than the ride to Bristol so the view was interesting. We arrived in Taunton thirty minutes late which I was thankful for as I still had a thirty five minute wait for the next bus standing outside in what was quite a cold breeze, almost wished I had gloves and a beanie on!

The hour and a half ride to Minehead on the Somerset coast was great, a ‘normal’ sized bus going through these narrow, winding country lanes, numerous times we had to stop and wait as trucks or buses coming the other way completely filled the road. The bus terminated at Minehead Butlins – oh I so wanted to go in and have a look, maybe stay a few days : ) But, no, I humped my pack, my ludicrously heavy camera bag and my wheelie bag in to town and waited and waited and waited for a bus to Porlock – thirty minutes late. It was cold and drizzly and I had no where to dump my bags so I had some English chips – with salt and vinegar of course, but didn’t get my camera out. I will be back there of course for the start of Coast Path Run in three days time – plus I will be in a car then, such luxury!

The ride to Porlock was only a few minutes, through some really tight streets, Porlock main road was barely two cars wide. I am staying at the Lorna Doone hotel, where I am meeting Mal and Tom on Saturday. I will be sharing a room with someone, not sure who yet, so I will enjoy a couple of quiet nights on my own. After settling down (unpacking my bag and throwing my crap all over the room ! ) I went for a walk around town and snapped a couple of images. The town is oldish, the Top Ship pub was originally built in the thirteenth century, but I could not find any info on the church. 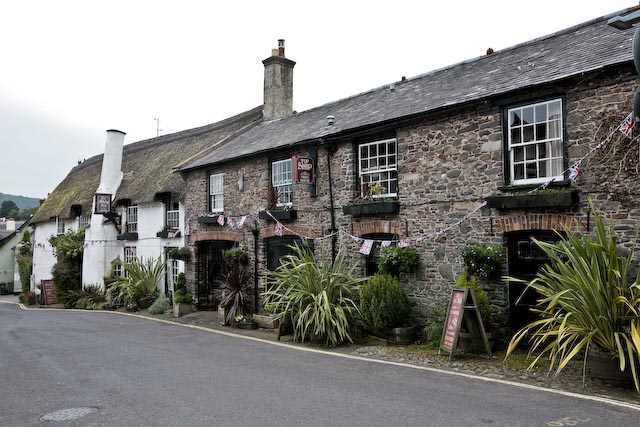 The view from my window

Some of the first leg of CPR !

After walkabout I went to the pub next door for chicken and leak pie and three pints of Exmoor Ale. The pub was really quiet at 5:00, but I was there to watch some football and do some blog writing catch up. After the football I went back to the hotel and sat in the lounge and watched another game with a Geordie from Aussie and used the internet as it does not work in the room.

I got called into the restaurant by this rather drunk woman from Zimbabwe to have a couple of wines with her and her sister and the hotel owners, it was amusing and I got a wee bit pickled.

Three days to Coast Path Run and I am getting a bit nervous, I cannot image how Tom and Mal feel.