‘You are here’ the sign tells me, us. However, this is not always helpful. Where exactly is here? The sign may show which way is up, but sans compass in the middle of dense forest, how do I know which way north really is? Getting the map out doesn’t really help. Doubt creeps in. We have been here before, making assumptions, tired decisions, stupid decisions, decisions based on what we know, familiarity leading to contempt. Wrong choices and wrong directions.

I am not talking about life, or a trans-Gobi expedition, this is just a four hour walk in the bush (as we in New Zealand call the forest). Though there was a brief moment on our walk this afternoon when we were not exactly sure where we were. The sign told us, but making sense of that in relation to where we came from and the map we carried led to a brief moment of indecision. We are both experienced in the bush, but have both made directional errors in the past. Nothing tragic, this is hardly serious wilderness, but frustrating and tiring mistakes, ego deflating mistakes, a loss of face as we consider ourselves experts in our domain.

Vicki is my newest Auckland friend, I am guessing we were introduced to each other some time in 2010 when we were both looking for someone to run in the hills with. Vicki wanted someone to slow her down so she could train for ultra distance off-road events and I was just too slow for the other trail runners I knew. We both love the bush and running the Waitakere Ranges trails, and we both like to yak incessantly. We made for good running/walking companions, and she became one of my closest friends. I always leave a day free on my visits to Auckland to ‘go bush’ with Vicki.

The Waitakere Ranges are under severe pressure right now. Kauri die-back is a fungal killer of New Zealand native kauri trees, most of which are found in the northern part of the north island. It has been identified that the fungus is spread manually and with this in mind the Waitakere Ranges are to be completely closed to humans from 1 May 2018. Two days time. As tracks are upgraded and modified; basically made into dull, boring, non-muddy super-highways they will be reopened. It is better than having no kauri, though I wonder if that means I will never be able to walk in the ranges again ? A terrible thought to contemplate. Luckily there were two days to go before the ban, my timing was perfect yet again.

I am now so unfit that the idea of a run fills me with dread, and though Vicki still likes to run she has put together a nice afternoon walk for us, early training for a mega event in January. Naturally this turned out to be more complex than planned. We arrived at the Cascades car park to be greeted by a sign advising that the trails were closed. We were a bit miffed at this as the closure was not due for a couple of days. Ignoring it we carried on, only to be met by a park ranger on the road down to the tracks. We questioned him about the closure, and he informed us that the swing bridge over the river had been washed out in the recent storm, hence the track closure, that was not a pre-empting of the council order.

Luckily Vicki had a plan B. Back in the car we carried on to the dunes at Bethells Beach and the start of the Wainamu tracks. Crossing the dunes was a bit of a slog, I hate being unfit, but we were soon in the mud and walking around the lake that has formed behind the dunes. There has been a lot of rain lately so the tracks were a little muddy, and very greasy. Pretty much how I like it.

Taking a right from the Wainamu Lake Track and on to Houghton’s Track we started to head uphill, always up hill. I have walked up and run down this trail a few times in the past, it has never been dry and I have been on my bum more than a few times coming down. The recent storms had turned the trail into a bit of a river. Though merely wet now you can see where the water had  flowed not that long ago.

Two weeks ago a super storm hit Auckland, there was a lot of wind damage, trees and power lines down, my youngest son had no power to his house for three days; and some were out for as long as ten. The Waitakeres took a battering as well and there were a lot of trees down across the tracks. I guess with the area being closed in a couple of days there was no compelling reason to keep these paths clear. 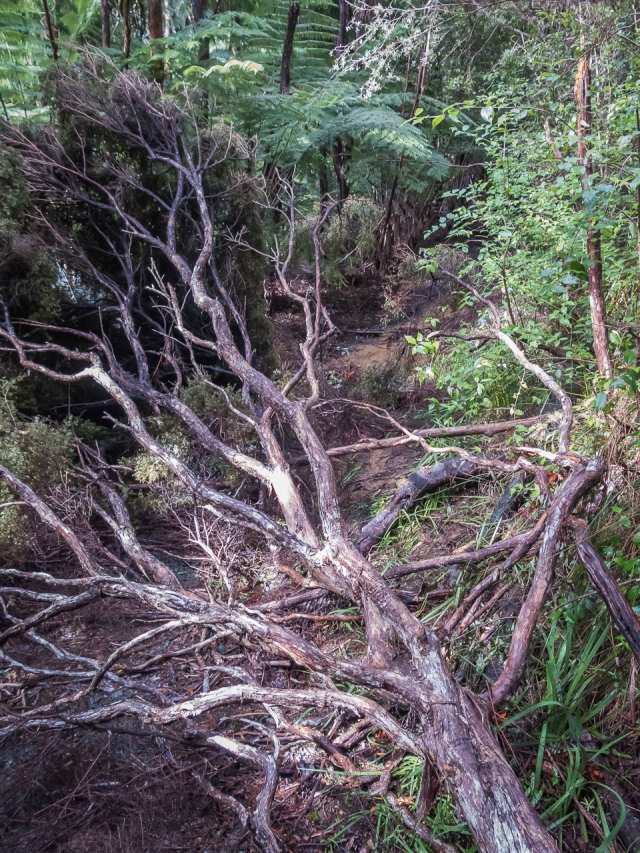 At the top of Houghton’s we decided to break the rules and walk a track that had been closed for some time. It was slowly disappearing as the bush took over, there were a couple of moments when we had to scout around a bit to find the trail as tree fall and new growth hid those faint traces of prior human passage. I can see how easily it is to get lost here. The bush is spectacular, lots of nikau, rimu and kauri. Punga trees, ferns and cutty grass line the trail.

I wish I knew more about the various bushes and trees, both here and in England. I can see that even in these low hills the variety of plant life varies at the different altitudes and I would love to be able to describe why. 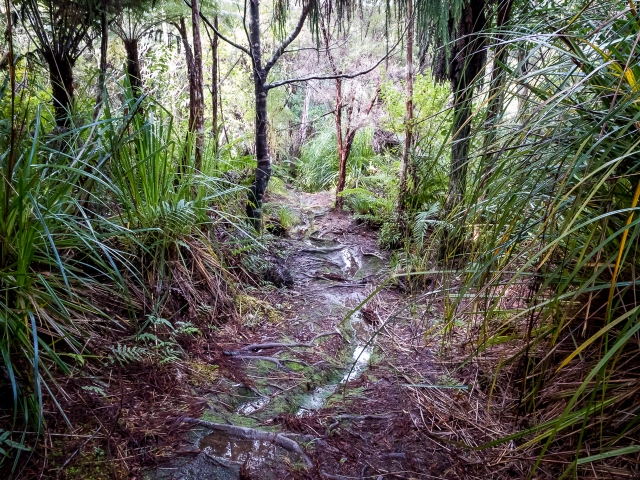 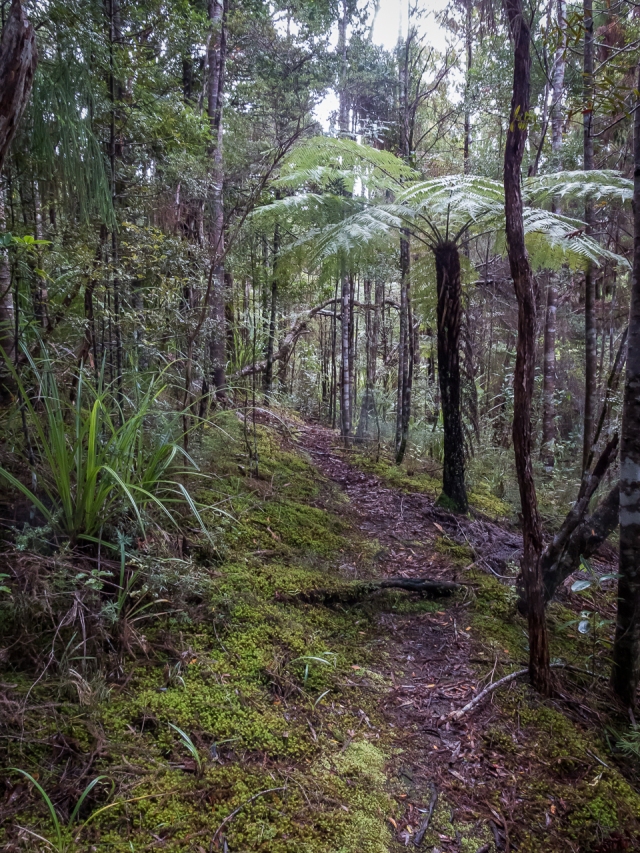 Dropping back down the far side of the ridge we cross the Wainamu Stream, the exiting path slightly upstream from the entry. Luckily the stream is not running too fast, or too deep. I am foolishly wearing long trousers. Good for the cutty grass, but not so good for stream crossings. 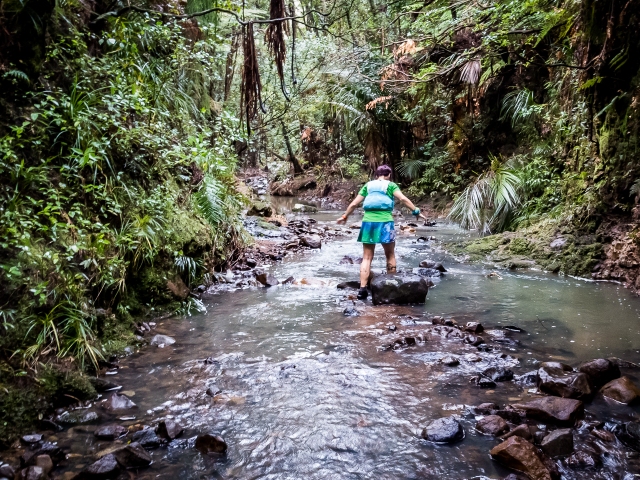 The stream marked a low point, a valley bottom. Half way round the walk, naturally this meant a schlep back to the top, to the next ridge. grrrr….  At the end of this track we had the ‘which way do we go now?’ discussion, the signs and the map not helping. Up was the right way, which was lucky as up we went, though we went that more based on feel than fact. Sometimes feel is right. These old signs are slowly being replaced with newer, modern, shiny white and orange signs. None of which I think will last as long at the old wooden signs, signs from youthful walking and camping sessions in these hills.

More uphill, more greasy track and windfall clambering, more bush bashing. This is why I love the Waitakere Ranges so much more than Epping Forest. Epping is not a bad substitute, and it certainly gets muddy and slippery, but it does not have the short steep climbs and the range of flora is limited, it feels less ‘jungle’ Most disappointingly, it does not have all these lovely and photogenic streams.

Our rolling ridge loop completed we were back at the top of Houghton’s Track. It is always so much easier going down, and I only slipped once, not quite landing on my butt; very close though. I was getting quiet tired by this stage, not having had a lot of sleep over the last week due to the time difference from London. The second (or was it third) large whisky late into the previous evening certainly didn’t aid matters, enjoyable as the evening was. We have been walking for four hours and I ran out of water a while back. I know when I am tired as my feet catch every second rock or root and each slippery patch gets closer to catching me out. Even so, I would rather be doing this than walking a mall – which I did yesterday.

Houghton’s Track ends at the bottom of the hill, back on the flat, on the far side of Wainamu Lake from the dunes and the car park. It is a boggy and wet slog back along the Lake Track and was one of the least fun sections of the day. However, it does lead to the lovely Wainamu Falls, looking quite calm and pretty with the right amount of water flowing over them. 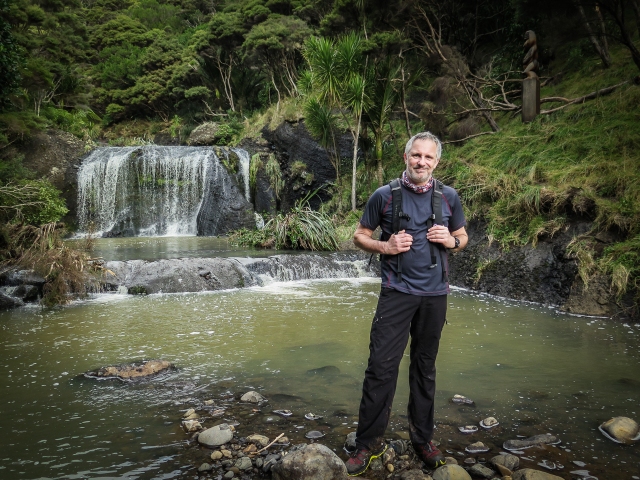 Behind us is a valley connecting the falls to the lake,  we had approached the falls up the valley from the other side of the river. We could see the flood flattened grass, the water mark up the bank was scarily high, there must have been a metre of water flowing through here after the rain a couple of weeks ago. You cannot see the normal flow of the stream in this picture, it is off to the right and I could have easily jumped over it. I cannot imagine how it would have looked and sounded as a raging torrent. Like all wild streams and rivers, these can be very dangerous in flood, two young lads drowned not that far from here only a couple of weeks ago. 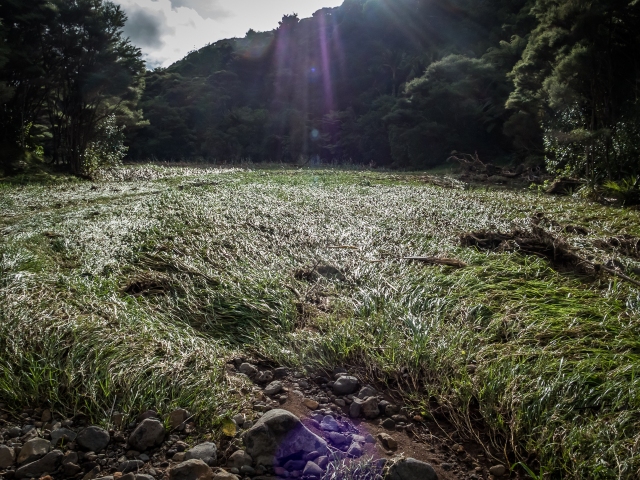 I had been thinking that we were pretty close to the end as we left the falls, but there was still a way to go. As we rounded the lake an early autumn squall passed, we stopped to don rain jackets, but by the time I took a picture and put my coat on the rain had passed and humidity briefly increased.

The last few hundred metres were mostly spent walking through the stream, it is shallow, but with all the rain it was too wide to bypass. Private farm land on one side and steep sided dunes on the other meant wet and sand filled shoes. 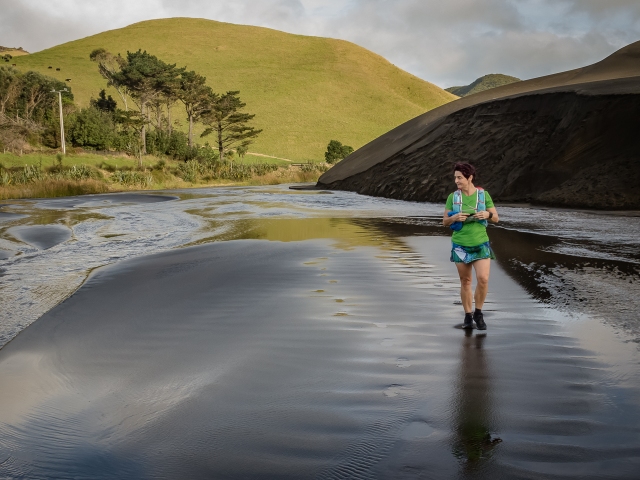 The stream narrowed just before the car park, forcing us to crab walk up a steep dune face to avoid the deeper and faster running water. My shoes were black with sand, and all I was thinking was ‘I am going to have wash these before I go to Australia on Tuesday.’  We soon arrived at the trail head and on to the waiting car, and lovely tin shed near the car park.

It was an excellent afternoon out, my second to last day in Auckland and a fitting end. I am pretty sure there was not more than a few seconds when one of us was not talking. I must note that more than once on the uphill bits I was only capable of a grunt or two. I must get fit again!

Thanks Vicki, I love our walks and talks. Good luck with your training, and don’t get caught