What a difference three hours can make.

The meagre blanket of snow that covered the plain when I arrived on the edge of the forest was all but gone when I left. Arriving with hat, scarf, gloves on and jacket zipped to the neck, departing with all the accessories packed away and my coat wide open to cool down. It was a great morning’s walk between those points. 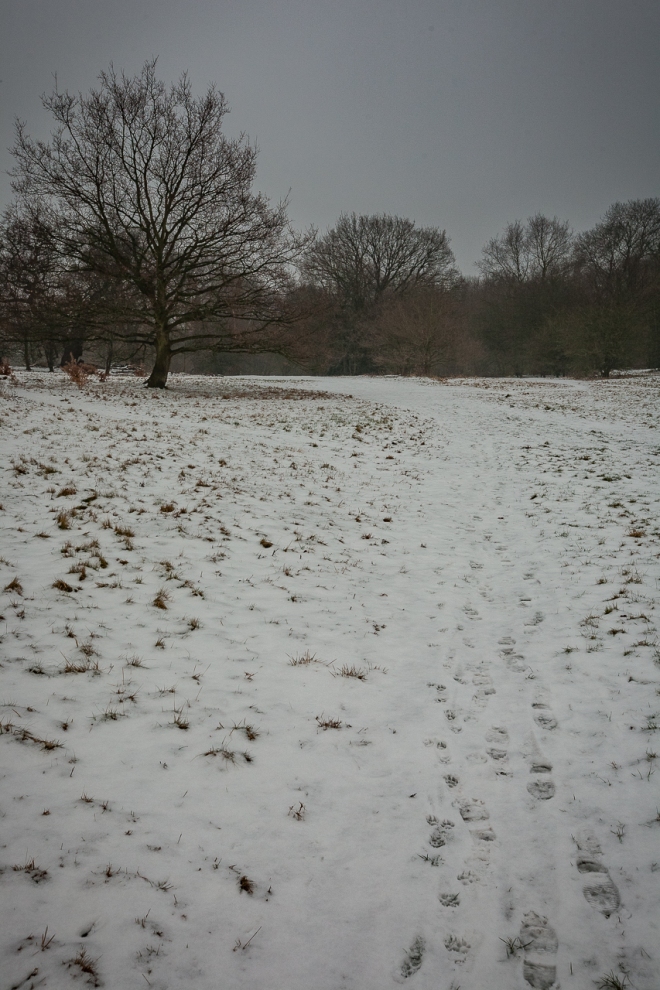 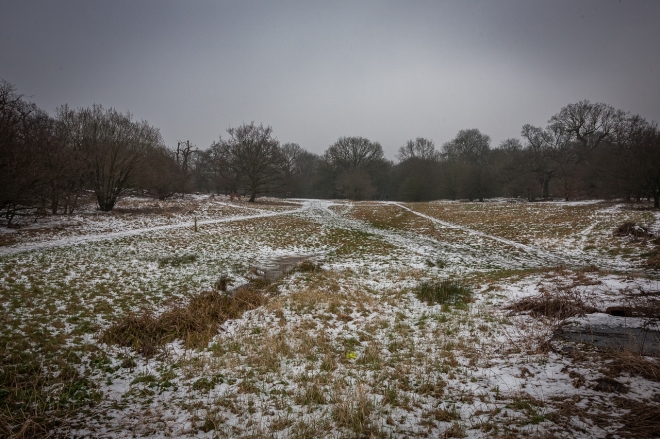 The ‘beast from the east’ weather system passed through London, and the rest of the UK, over the last five days. The system brought some terrible weather to many parts of the country, though we in London were unscathed – as usual. What we did have was four days of on and off snow, resulting in the longest period of settled snow in the five years I have lived here.

It has been a really busy month at work so I was not able to take time off to get to the forest, so it was a little worrying to see the snow no longer falling on Friday evening. It was with some nervousness I peered out from behind the bedroom curtains early this morning to see what it was like. Snow on the ground, very flat grey sky and the roads were clear. Perfect!

I am not sure what I wanted to achieve this morning, take photos being the obvious objective, getting some quiet time also appealed. I never listen to music when I am there, one of the few places where I am on my own that I do not. Wandering vacantly appears to be what I excel at. 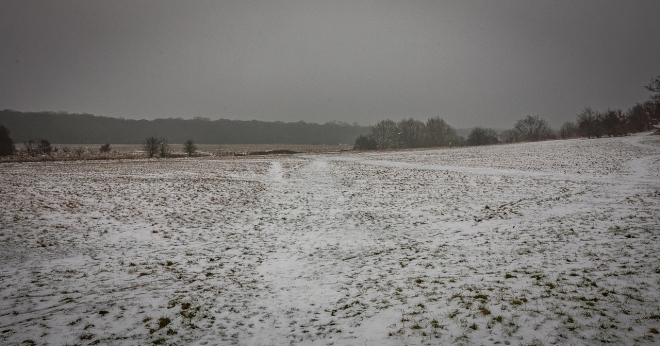 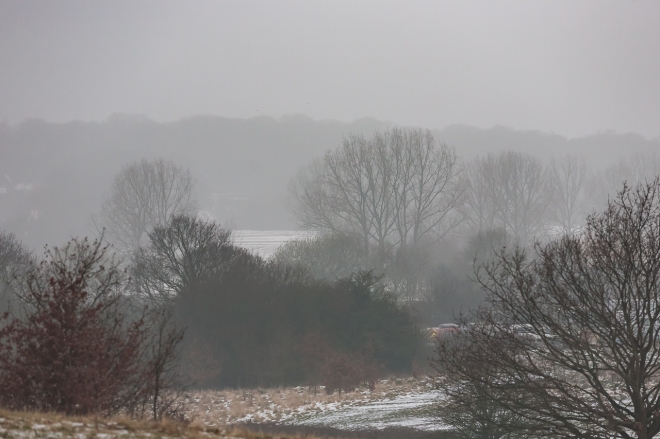 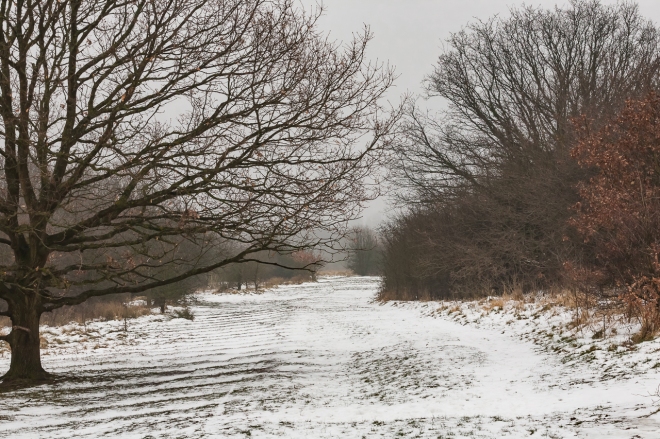 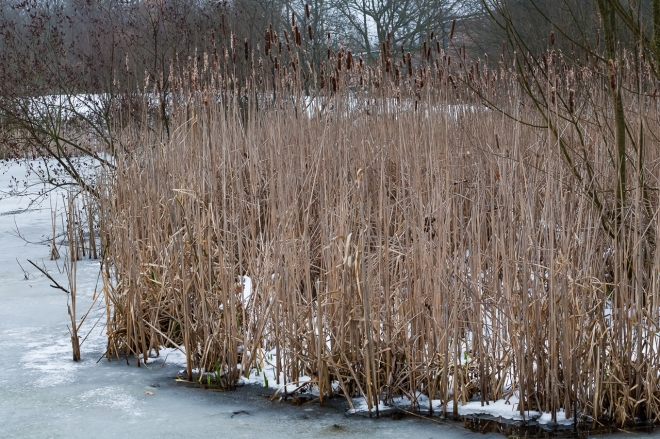 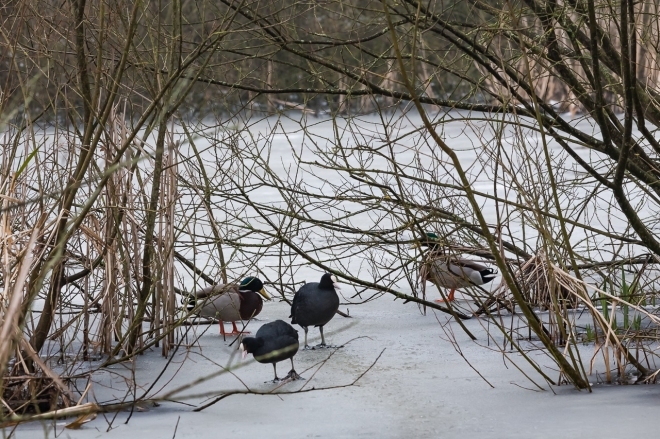 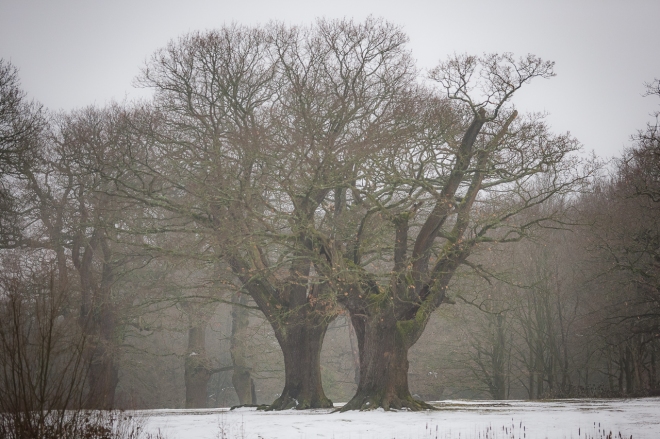 Butlers Retreat – where I stopped for coffee on my way home. Very nice coffee and cake 🙂 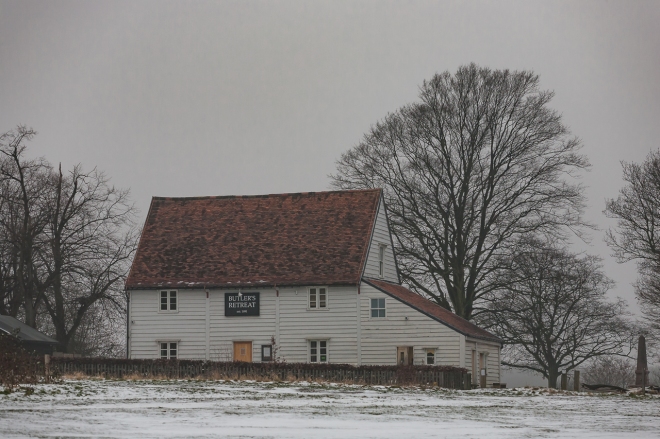 Surprisingly I was alone for most of the morning, only seeing a couple of mountain bikers and a few dog walkers. I saw no-one on the main routes apart from one solitary runner, the dog walkers were all in the trees on what I have considered bike trails. Perhaps they just took the opportunity to roam more freely than usual? There were signs others had been here mid-week. 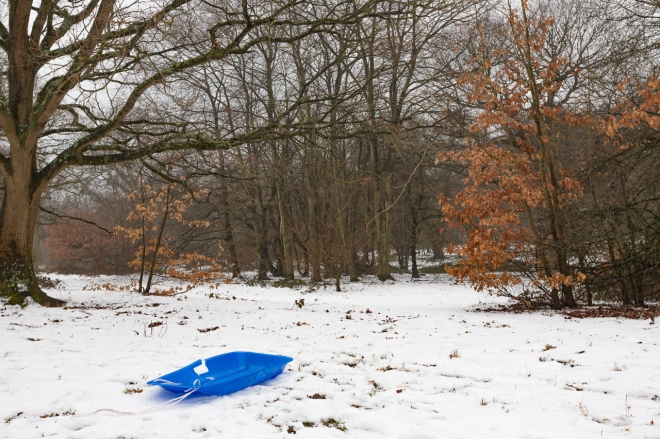 I was really (pleasantly) surprised how many animal foot prints I saw in the snow, though this is a forest so not sure why I was surprised. Deer, rabbit, fox and bird trails criss-crossed every human marked trail. Great signs for a healthy forest. Apart from birds I saw none of the animals that left these trails, though I was looking. 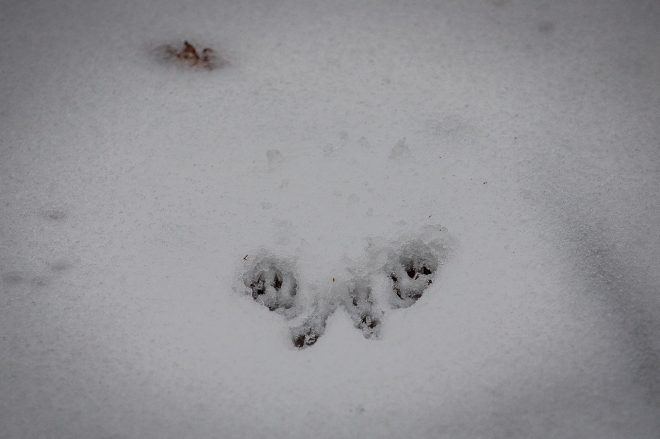 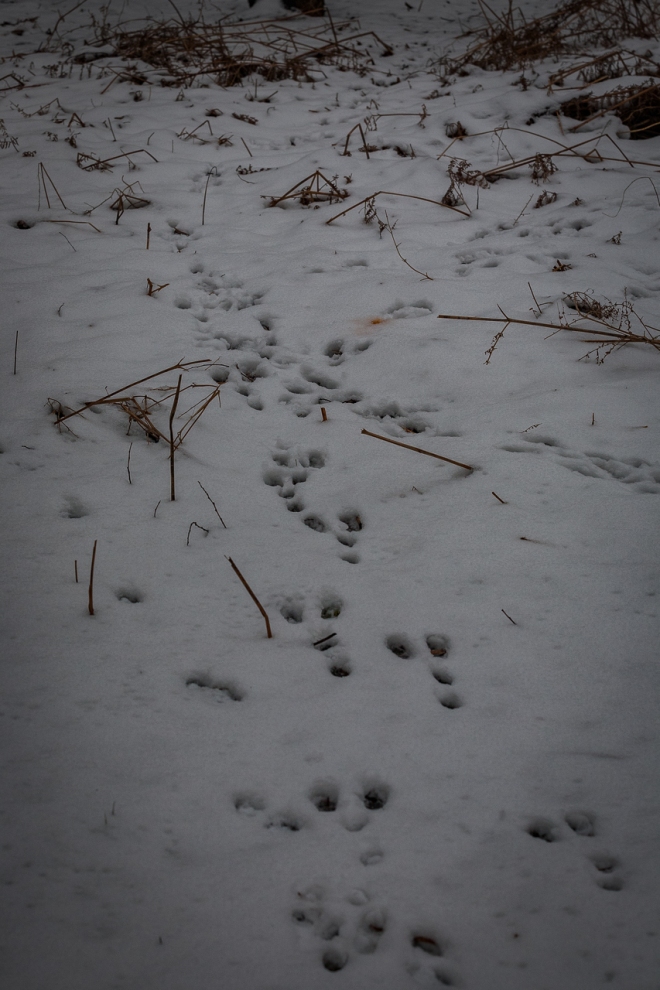 The snow was very shallow and very light; a foot step enough to disturb it, leaving earthen trails behind. Enough to cover light undergrowth and tree fall. Brambles, nettles and ferns were barely visible and where I would normally walk around the undergrowth I just walked over the top, only becoming entangled the once. It allowed for a more random path though the trees, inevitably letting me get hopelessly lost. As always. 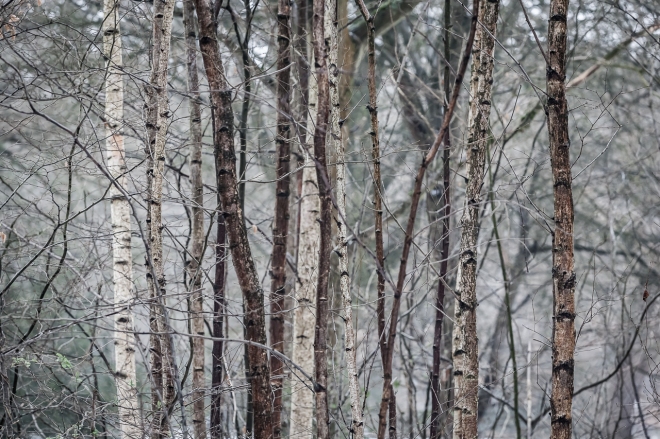 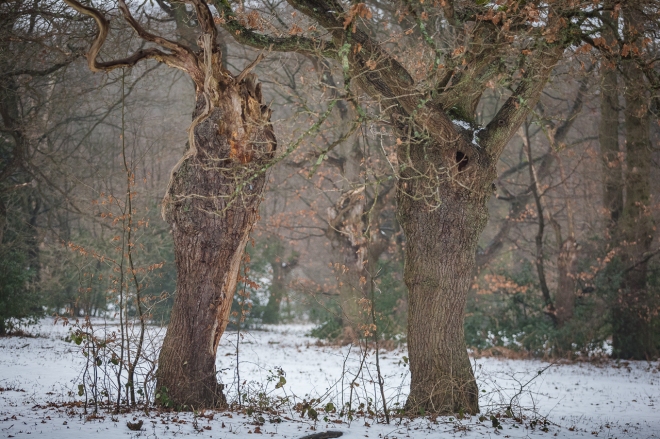 As well as providing an amazing contrasting backdrop for photos and letting the trees stand out from the natural toned background the snow made finding my way around far harder than I expected, I was lost almost immediately I was into the trees and I never found the spot I was at barely two weeks ago. Though discovering this small grove of beech made my morning. The coppery gold leaves just popping out of the background. Humping the tripod around was worth every ounce of extra weight. 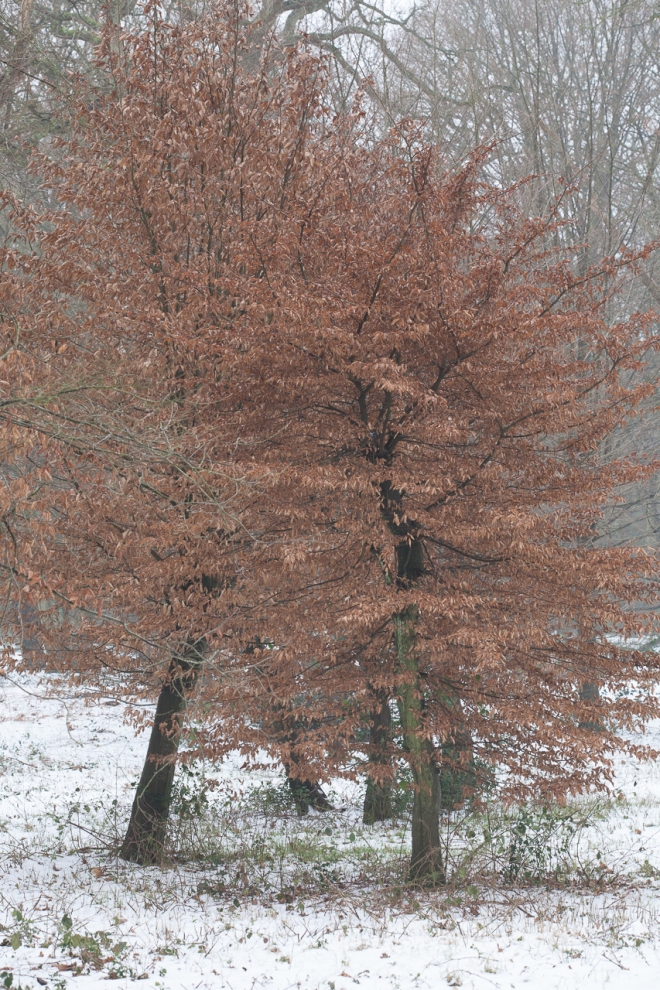 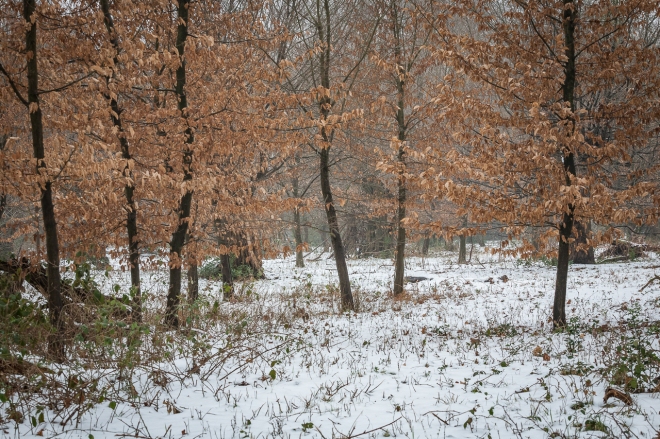 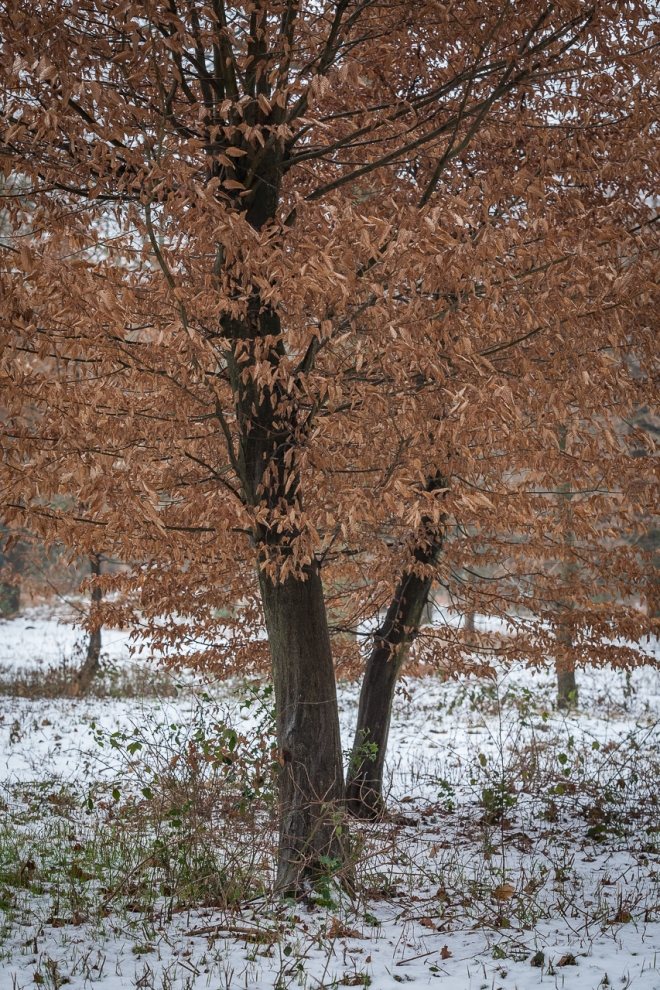 Following a bike tyre trail from what I thought was Cuckoo Brook I was aiming to get to a stand of silver birch near the church at High Beech. Silver birch in the snow is a real cliche I know, but then I do love a cliche. I never did get there. I had no idea where I was by this stage. 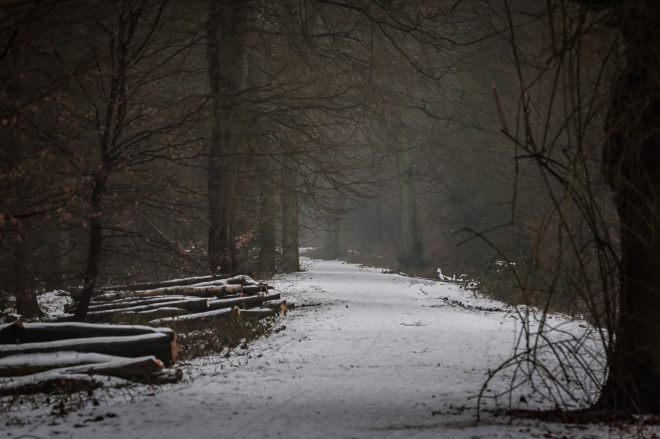 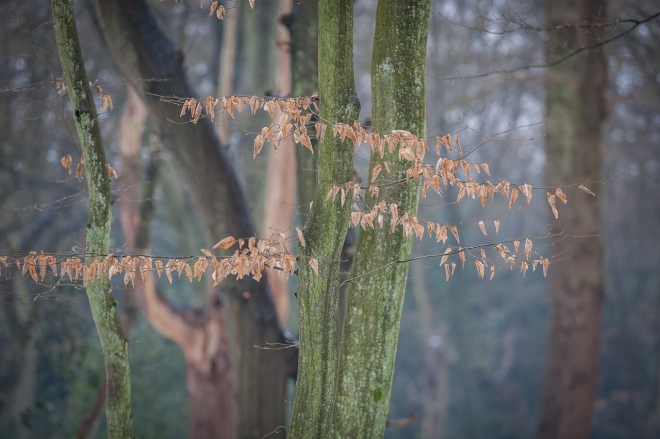 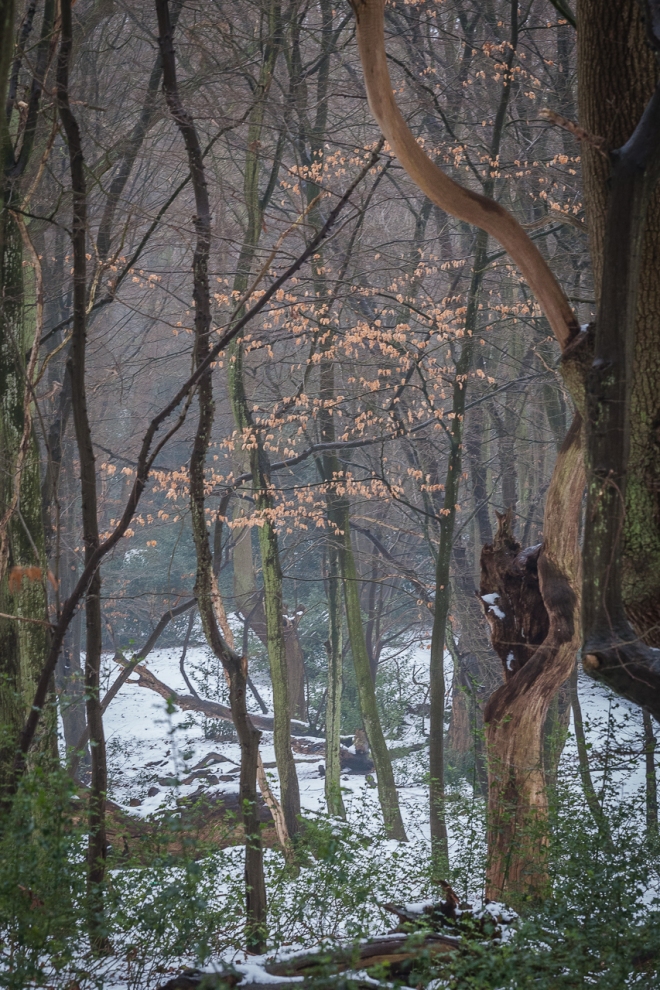 The morning was getting on and it was time to head back towards the station, with no idea of my location I turned towards the distant traffic noise from Epping New Rd. With the snow and the flat low clouds the forest was very quiet, I could hear the squeak of my shoes on the snow, the occasional bird and a dull but constant, surf like hum in the background. It was almost like being slightly inland from the sea. 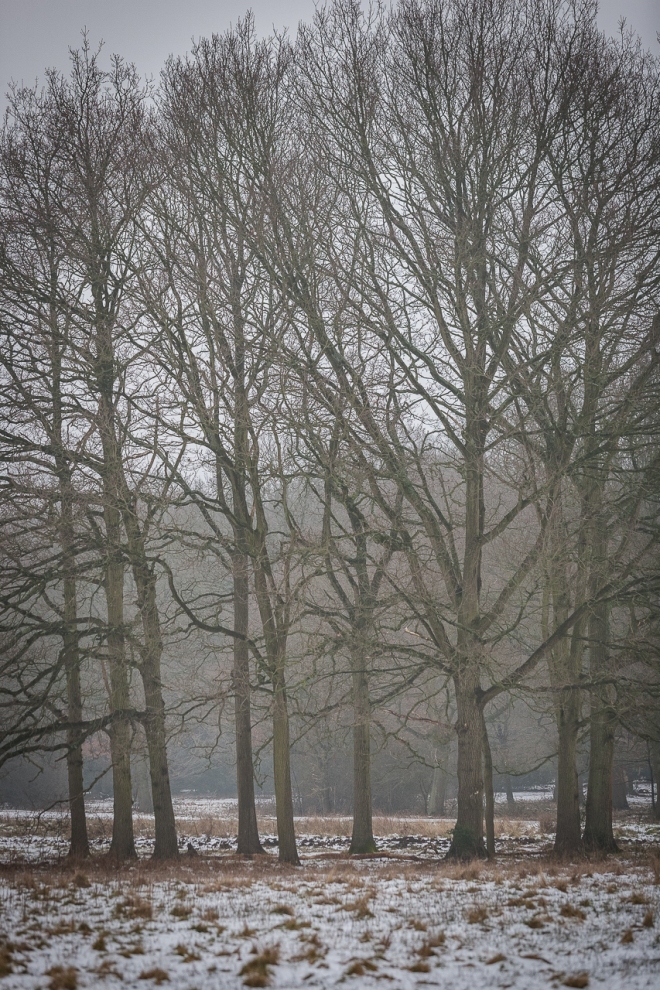 I followed one of the main paths for a while, seeing one of the few people that were also out enjoying this rare solitude. 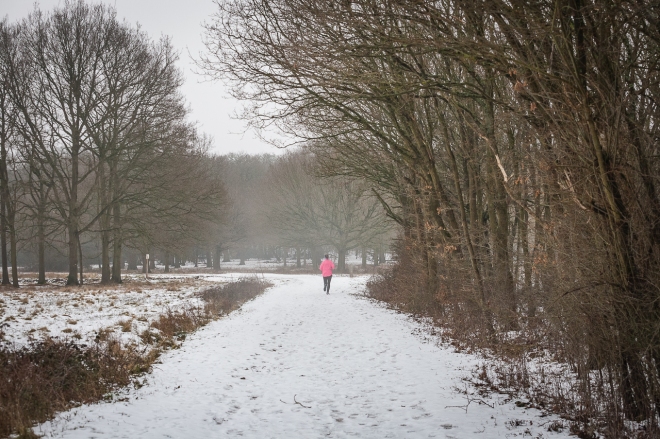 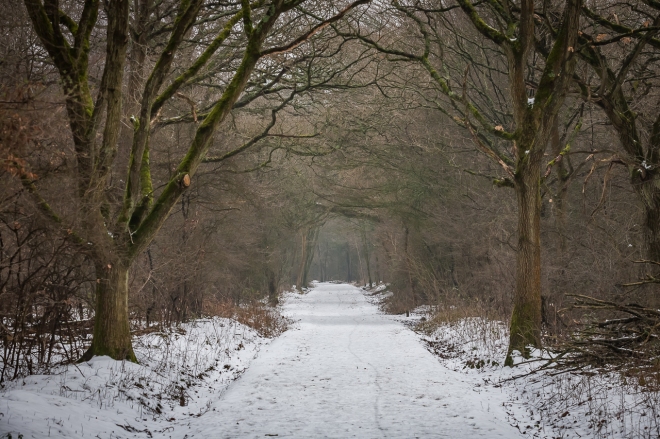 I soon left the main path again and back into the trees hoping to find Connaught Water. It turned out I still didn’t know where I was, though I did find a nice stand of young silver birch to make up for missing the one I was aiming for earlier. It is all a bit Scandi ! 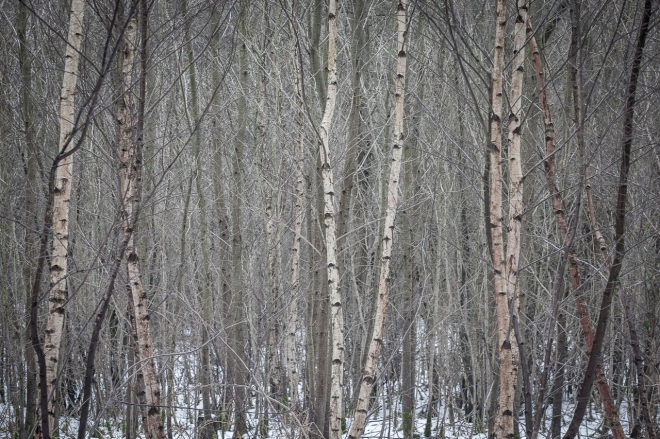 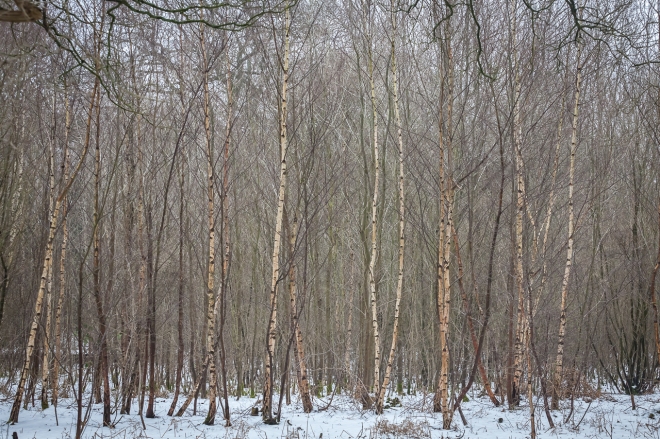 Finding another one of the main paths I experimented with a bit of impressionist photography before checking the map on my phone, finally working out where I was and setting off in the right direction. 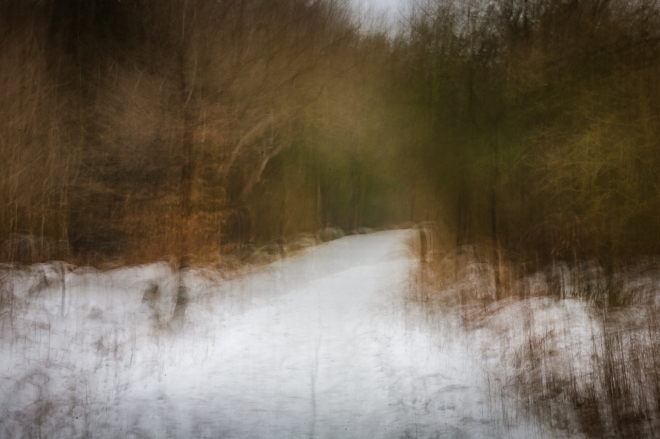 The paths around an almost totally iced over Connaught Water were almost empty of people, I found this so unusual as this place is normally full of walkers. I had visions of families and young couples out enjoying the snow, tossing snowballs at each other and admiring the dedication of the birds sitting on the cold ice. 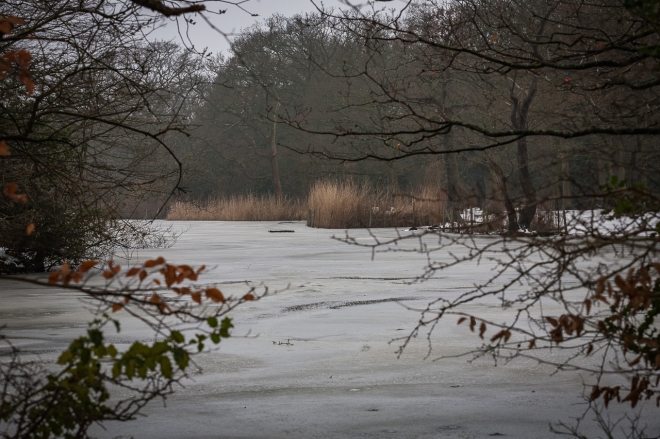 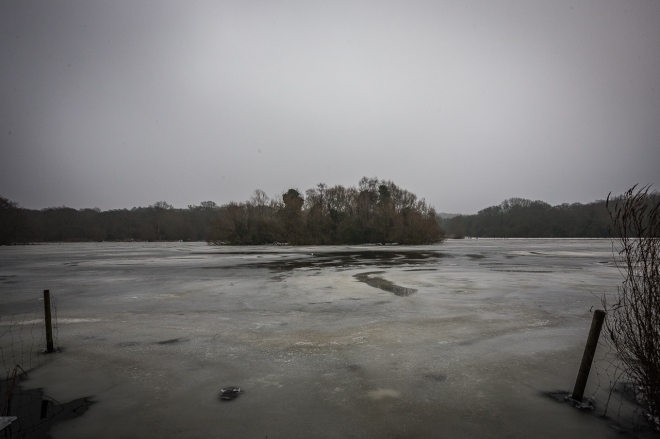 The snow was slowly melting away where there was no tree cover and I was quite shocked to see grass that had a white top coat when I arrived was almost bare of snow as I left. 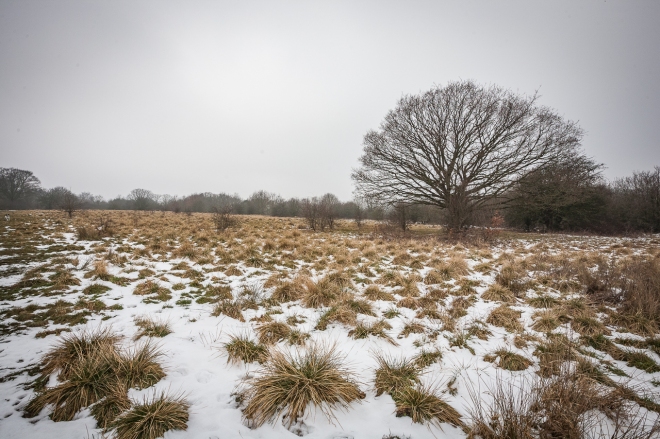 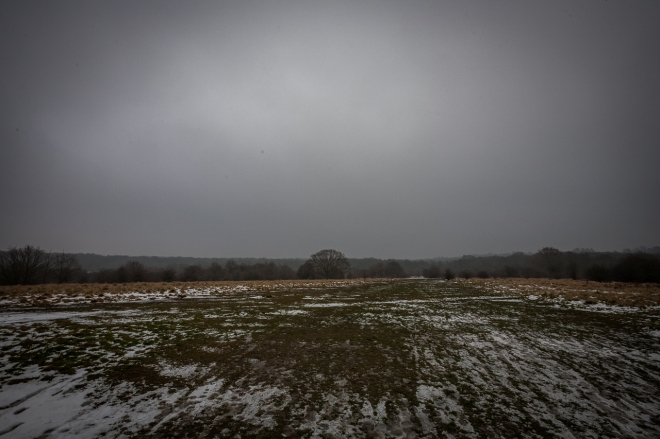 I was really pleased I made it in time, that I had not followed my normal weekend routine and had a lie in.

It was a lovely, peaceful, beautiful morning out, and I hope you enjoyed the photos.