It was another light breakfast this morning, for today we are feasting. Well, maybe not feasting exactly, but we did have lunch booked at the highly regarded Fish Cafe in Rye so it was important to save space.

To maximise the pending dining experience we are going to take in some sea air and enjoy the delights of two of Kent’s finest but totally different beaches. First on the list is Camber Sands, renowned for its Pontins Holiday Camp and long sandy beaches. With a bit of sun out it did not disappoint, though I could never come here for a holiday. Not with a Pontins nearby. I am also sure if a beach with a German sausage hut on it is really for me either. 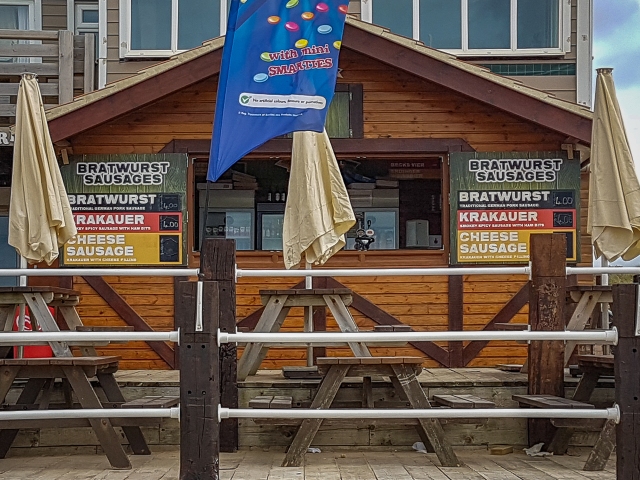 But the beach is big, and the sea is miles away. It is a big beach, with a pretty tame sea, especially by the standards of Auckland’s Piha. But tragedy is never far away from water and five young men died here last summer when they were trapped and stuck on a sandbank and were caught by the incoming tide. A terrible tragedy. Never underestimate the sea. 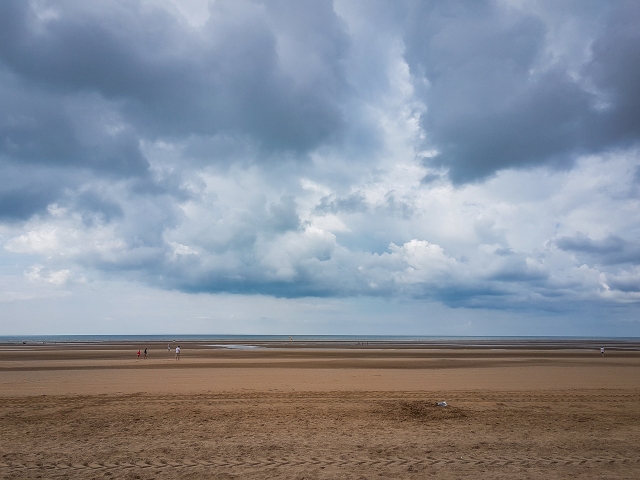 We took a brief walk before driving further up the coast to the surreal, desolate and totally ‘me’ beach at Dungeness. Like Camber Sands and its German sausage hut, I am not sure if I can really do a beach with a nuclear power station on it.

Though you do not come here for the beach, it is all pebbles, but it is a beautiful place and I have vowed to come back and spend some proper photography time here, preferably in a big storm! We stopped for another bad coffee, though the least bad of all the bad coffees we have had so far, so things were getting better. Must be the influence of London. Dungeness is going upmarket.

One of the reasons this is a magnet for photographers is the old fishers’ cottages, I am still using the mobile phone camera so none of these are brilliant, though I am pretty pleased with most of the photos I took. We were lucky that a few dark clouds managed to stray across as we were there. 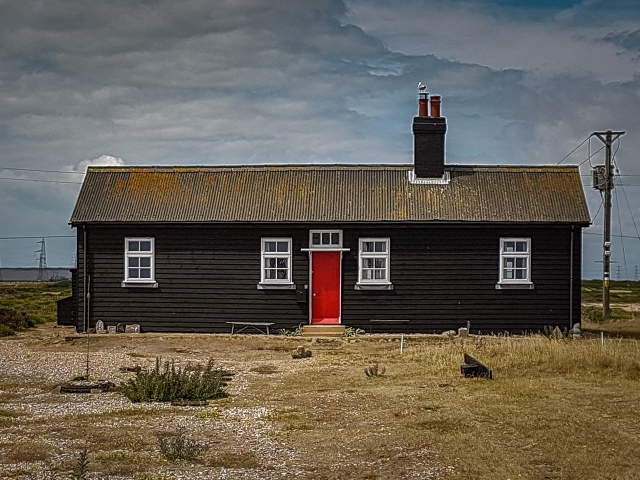 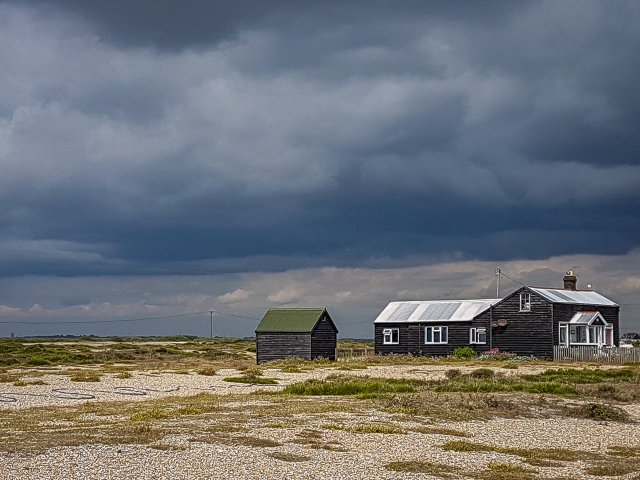 With lunch not that far away we drove on up the coast to Lydd. I spotted this wrecked boat as we drove past and just had to stop for a few photos. The Jeniray, and her younger sibling Carole Ann. I could have spent a bit of time here, but we didn’t have much left, so it was a few quick snaps of the boats and those magnificent clouds before we were back in the car again. 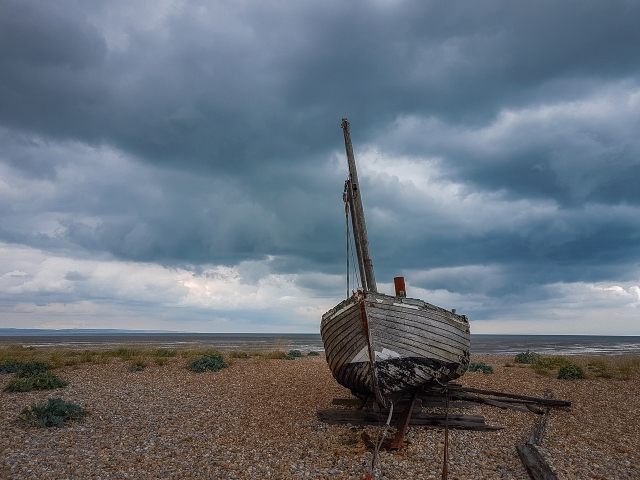 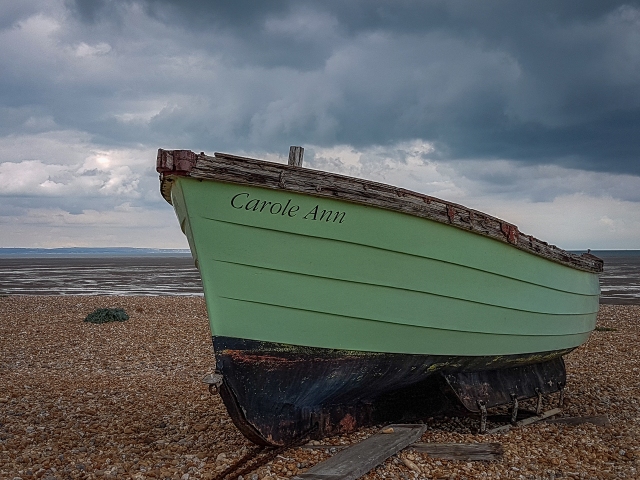 Completing the loop past Lydd and on to Romney, before heading back to Rye. Though I had to stop for one last photo of those clouds settling down on top of the windmills.

Parking up in Rye we had a few minutes for a stroll before our reservation at the Fish Cafe. We had walked most of the way there before I realised I had not ‘paid and displayed’ in the carpark, so I had a mad dash back to resolve it before I ended up with some monster parking fine. I was lucky…

Lunch, as we expected, was very nice. As was pud, the two (small) glasses of wine, though the coffee was a let down… a recurring nightmare for me. We had an afternoon to kill so took a longer, slower walk around Rye. We loved it when we stayed here in October 2014, though we were not so enamoured with the town this time, maybe it was just busier, and it has gotten a lot or expensive in the past three years. I still like it, just less. There are loads more posts of Rye in the posts from Oct 2014.

On the way back to the B & B we picked up a couple of snacky things to nibble on as we didn’t fancy another meal come dinner time . There was a big breakfast waiting if we wanted it in the morning. We finally spent a few hours doing nothing, reading and having a holiday rest. I did try out the big, deep and wonderful bath in the room as well. Bliss!

The next morning it was holiday all over 😦 After breakfast we were back in the car and taking a slow journey homewards, mainly due to me not really knowing which way to go. Funnily enough we did manage to find Chapel Down vineyard quite easily. It was 10:30am, I was driving, so it was only a very small tasting. We have had, and enjoyed, a few of their wines in the past, so it was quite simple for them to lure is into buying some product. No complaints mind. The English pinot noir was really nice. Who would have thought!

I will say, that finally, after almost a week, I managed to get a good flat white in the cafe at Chapel Down. We must be getting close to civilisation again.

I was not looking forward to London, and yeah, this was why. A very long and slow journey through the Blackwall Tunnel.

It was a great week away, we stayed in some interesting places, found a couple of towns that we want to return to and stay a few more nights in. Maybe one of them will finally turn into our place by the sea!  We shall see.

I love being on holiday, but equally I love coming home after one as well. The return from this one was slightly less enjoyable as we have the decorators in from Monday doing some insurance work after a minor subsidence issue. We have to shift all the furniture out of the front room, not a lot of fun, hopefully it will only last a couple of weeks, but who knows…..