A couple of weeks ago I received a message from Martha, a very old friend in NZ letting me know she was coming over to London for a conference for a few days and would I be free to do a catch up and a walk around some of the highlights of central London. Of course!

Yesterday, was perhaps not the best day to arrive in London, last night there was a terror incident in London Bridge which resulted in the deaths of 8 poor souls just going about enjoying themselves. London Bridge was on my planned walking route, but I was more concerned that Martha may not want to walk randomly about London, or that London may not be itself wonderful self after such an awful event, fortunately no.

I met Martha at Holborn station at 10:00 with a loose plan in mind to see as many of the key spots as was possible on foot in the next three hours.

Our first stop was Covent Garden Market, I used to work very close to here, so am familiar with the location. I only ever came here at lunch time or after work so was not used to seeing it so quiet, it had nothing to do with the incident last night, none of the shops were open so it was too early for tourists.

I haven’t played tourist for ages, so it was very enjoyable to walk around the city, taking a few photos as I went. We did walk down through Covent Garden and the back of Soho to Trafalgar Square, where I completely forgot to take any photos of either the National Gallery or Nelson’s column. There were quite a few tourists here, clambering over the lions and taking selfies, so me being me I got the hump with them getting in my photo and didn’t take one.

We passed New Zealand House on Haymarket, once voted the west end of London’s ugliest building – a very fair call in my mind!

Walking up to Piccaddilly Circus and it’s famous Eros statue, we were reminded by the banners that nothing shuts London down (contrary to then nutjob ‘alt-right’ press in America ) and that London is a welcoming and open city. 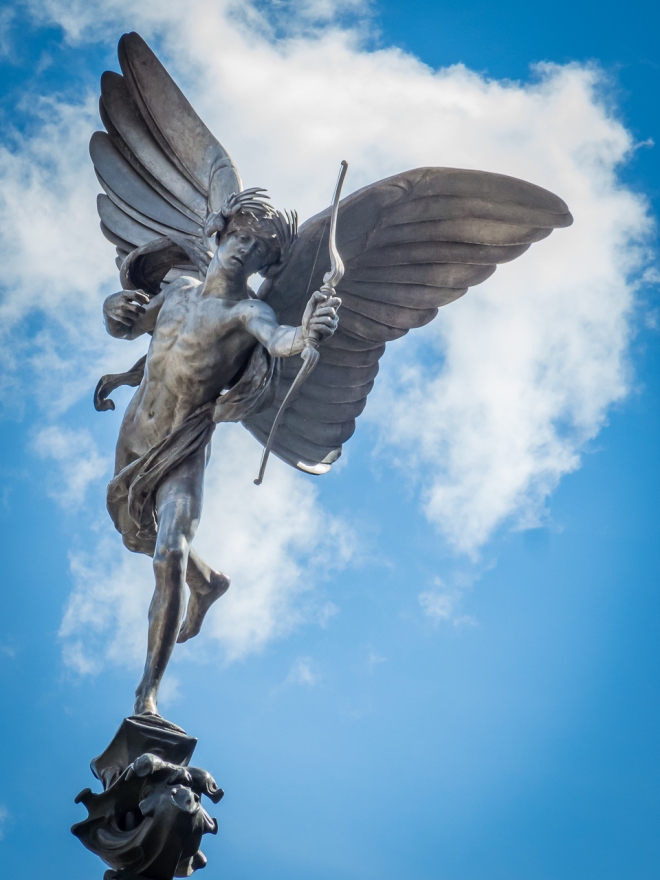 I subtly steered Martha along Piccadilly to Green Park station. I will hopefully start a new job in July and Green Park is the nearest station on the Victoria Line to where my new office will be, and I wanted to get a rough idea how long the walk would be. More on the new job once it is finalised, though I am quite excited about it!

I do not go to this side of London very often, so rarely walk through the royal parks any more, a situation I aim to remedy come July, they are such a lovely part of London. When I stayed in Shepherds Bush for 3 months at the end of 2012 I used to walk through Kensington Gardens, Hyde, Green and St James Park quite regularly. The empty deck chairs laid out in Green Park waiting to be rented remind me of grave stones.

Though good fortune rather than good planning we arrived at Buckingham Palace just as the changing of the guard was on, the Mall was closed so we had to wait for a few minutes to cross over in to St James Park. The area around Buck Palace was very crowded, which was good to see. There were a few police around, mainly controlling pedestrian traffic. I was surprised that there were not more, and I only saw one armed policeman during the entire walk, so pleasing to see.

St James Park is my favourite of the royal parks, it is small and the lake is great, and it has a pretty good cafe as well, always a bonus when out walking. There are great views, back towards Buckingham Palace, 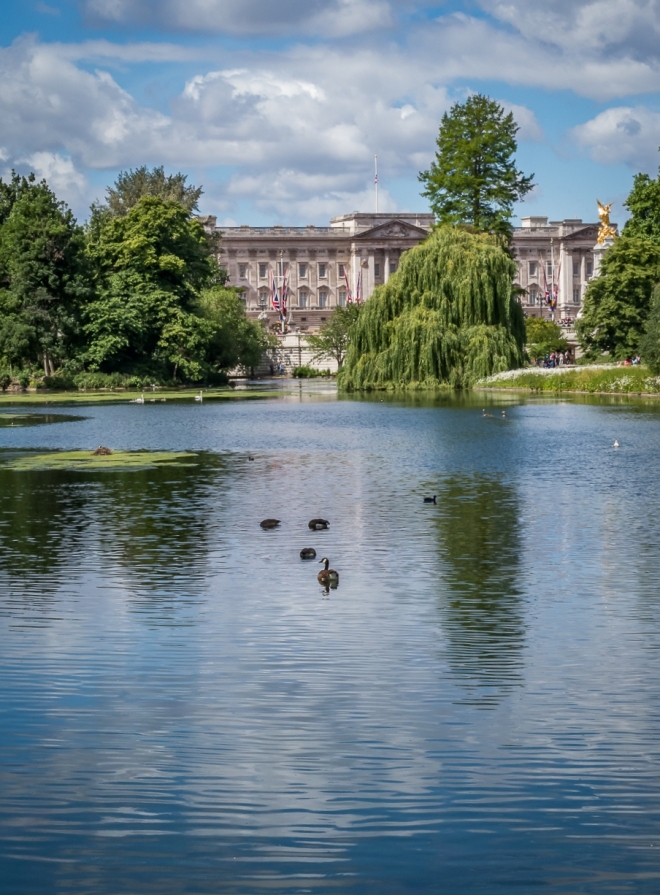 and forward to Whitehall, where we will next walk; and close to where I hope to be working in July.

We had to stop for some obligatory photos of Big Ben, and the Houses of Parliament. Taken at a slightly weird angle 🙂

Crossing over Westminster Bridge to the South Bank, where the crowds of tourists seem to be pretty normal, frustratingly normal when you are trying to pass through them. Good to see London standing up as normal, calm, considerate and a bit too crowded. I am a big fan of French street artist Invader and have not seen this little space invader near Blackfriars Bridge, nice! 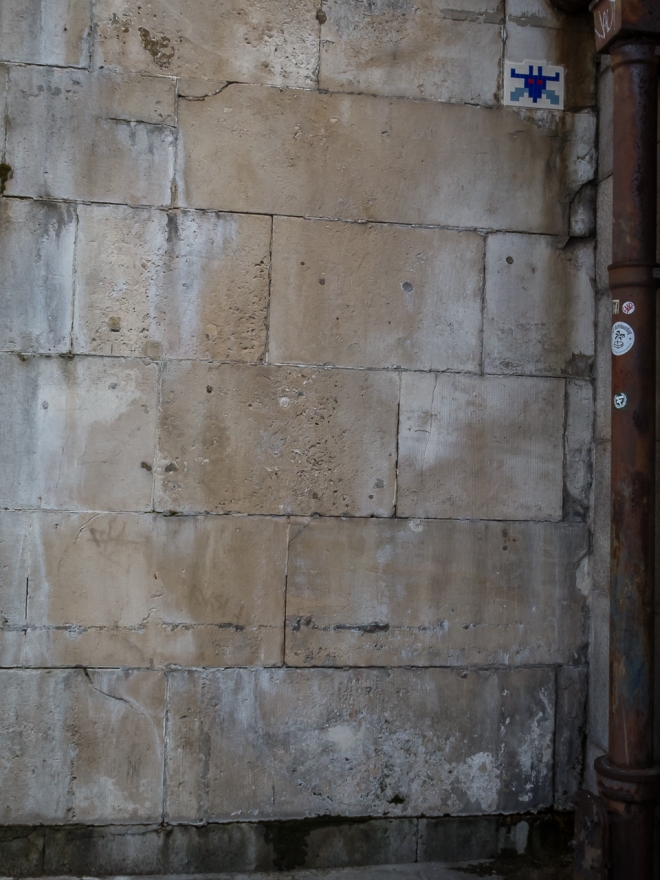 Next stop was for one of my favourite London views; St Pauls from the outside of Tate Modern, with added bonus of bubbles from one of the many buskers.

Crossing over the Millennium Bridge we passed the cathedral before heading up Fleet St back towards where we started, we took a detour down one of the side streets and into the Temple area. I love this bit of London, especially on a Sunday, when it is almost deserted. I have never seen Temple Church before, stunning. One of the things I enjoy about the Temple is that it is a bit of a warren, I have been here a few times, yet I have never found this bit; and it is hardly a small bit !

Queen Victoria outside the Royal Courts of Justice.

Our final stop was at Somerset House, where we met El for lunch and a glass of rose. We love Somerset House in summer, a glass of wine in a beautiful courtyard just off of the mad busy Strand, wonderful.

That was the end of my brief walking tour of London for Martha. Three hours of walking and chatting and catching up on life back in New Zealand. A great day out, and a reminder that I do love this city! 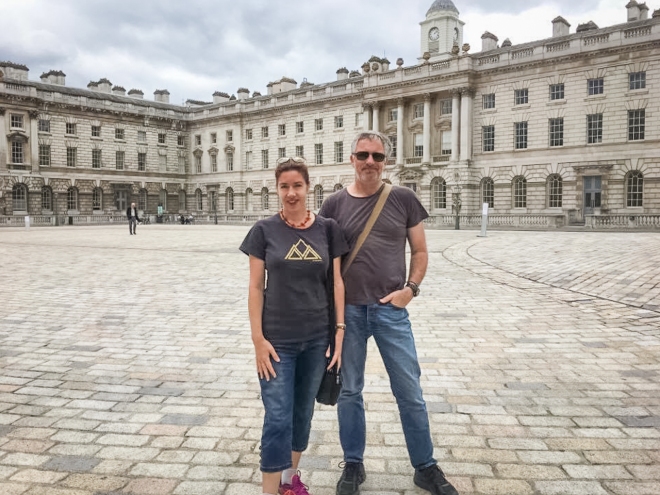